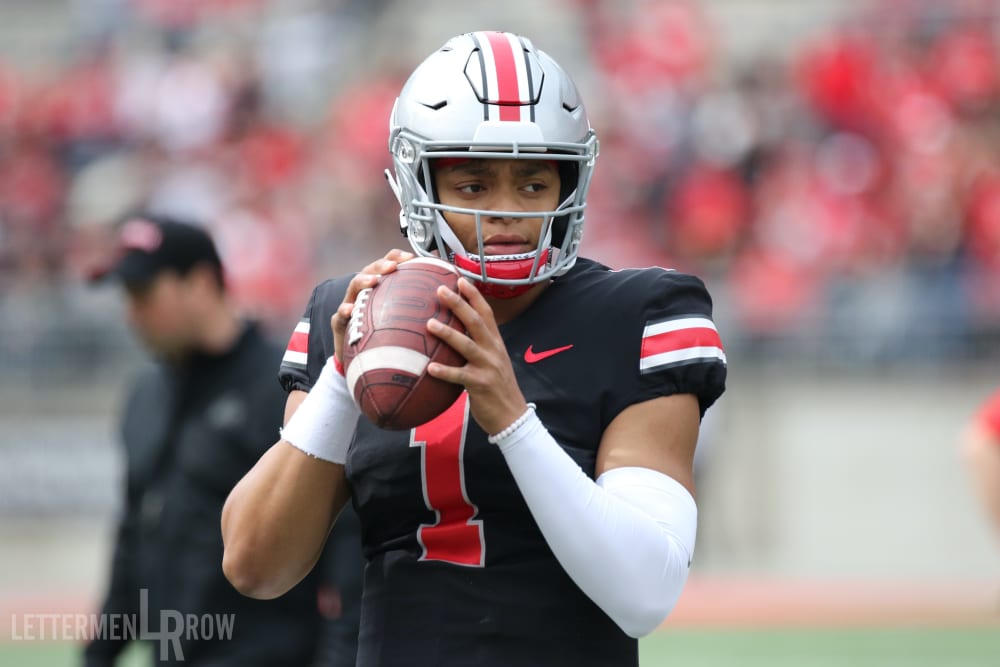 Ohio State's fate is in the capable hands of Justin Fields. (Birm/Lettermen Row)

The only Ohio State fans who should be worried about the current state of the Buckeyes’ quarterback room are the ones who haven’t seen a College Football Playoff game since the Buckeyes last participated in one.

That’s obviously not to say that the current state of affairs is ideal. While head coach Ryan Day had to suspect that bringing in Justin Fields, the No. 2 overall recruit in the Class of 2018, would chase off Tate Martell, nobody could have expected Matthew Baldwin to join the exodus. (That’s worth a story in itself, but the bottom line is that while Fields’ emergence may have played a small part in his decision, he did wait his turn in high school when he could have started for any other high school. Furthermore, when he signed there’s no way he could have expected to play as a redshirt freshman with both Dwayne Haskins — not seen as a one-and-done starter at the time — and Tate Martell in front of him. And the homesickness is real. But I digress.)

So now Ohio State finds itself in a situation where the only quarterbacks on the roster are Fields, graduate transfer Chris Chugunov and walk-on Danny Vanatsky. The backup situation is… not ideal. But here’s the thing — who cares about the backups? Ohio State paid this price for a reason — to get the best possible quarterback for its program, one viewed as having a national championship-type ceiling as a passer and a playmaker.

Given what happened in 2014, Ohio State is an ironic program to use in arguing that protecting backup quarterbacks isn’t worth it. So yes, let’s concede that there’s always a chance that the starter will be someone with two shoulder surgeries that will ultimately cause him to switch positions and the backup could go 11-1 as a redshirt freshman but break his ankle. At which point it would be quite valuable not to have chased off the future national champion third string quarterback. If that happens again, I guess I’ll just concede the point.

But back in the normal world, elite teams have weathered all sorts of collateral damage that came from recruiting and starting a young, ultra-talented quarterback. That’s been especially true over the last three seasons, so let’s look at what happened in each instance.

In 2016, Alabama started Blake Barnett in the opener against USC. However, Jalen Hurts entered the game later in the first quarter and never really let go of the job. By late September, the former 5-star QB Barnett left the program. That turned former 4-star, top-100 recruit Cooper Bateman into Alabama’s backup. But Bateman saw the writing on the wall and announced his intent to transfer on Dec. 4 after Hurts led Alabama to a 12-0 regular season and dominant SEC Championship game win. Three days later, David Cornwell — another 4-star, top-100 recruit — announced he also would transfer. Alabama’s quarterback depth was completely destroyed… not that it ever showed on the field. Hurts led Alabama to the national title game, where the Tide lost a 35-31 contest on a last-minute Clemson touchdown.

Clemson appeared to be in quite a predicament on Sept. 29, 2018. True freshman phenom Trevor Lawrence quickly grabbed the starting job away from Kelly Bryant, who promptly left the program and used his four-game redshirt season. Earlier, in fall camp, 5-star redshirt freshman Hunter Johnson left for Northwestern. That left 3-star redshirt freshman Chase Brice as Clemson’s only other quarterback. Lawrence went down with an injury in Game No. 5, leaving Brice as Clemson’s quarterback for the foreseeable future. Fortunately for Clemson, that happened to be just the second half of the Syracuse game. Lawrence ended up quarterbacking Clemson to a national championship, and it turns out it literally could not have meant less that Kelly Bryant and Hunter Johnson weren’t there to see it.

A question for Ohio State fans

Here’s what it boils down to in Ohio State’s situation. Looking at the 2019 season, the goal of which is to win a national championship, would you prefer to have Tate Martell and (possibly) Matthew Baldwin in the quarterback room, or would you rather have Justin Fields?

If Justin Fields is as advertised, he is that guy. He was the No. 2 overall recruit in the 2018 class behind Lawrence, the guy who just won a national championship as a freshman. Day could have chosen not to pursue him. Nobody put a gun to his head. He saw what he had at the position with Haskins gone, and he sought out a player even though he knew it would thin the quarterback depth chart with at least one transfer.

It will of course be up to Ohio State to make sure this gamble pays off by protecting him at all costs. But the best teams in the country have shown that it’s a risk worth taking. Championship teams have the best quarterback, not the most quarterbacks.