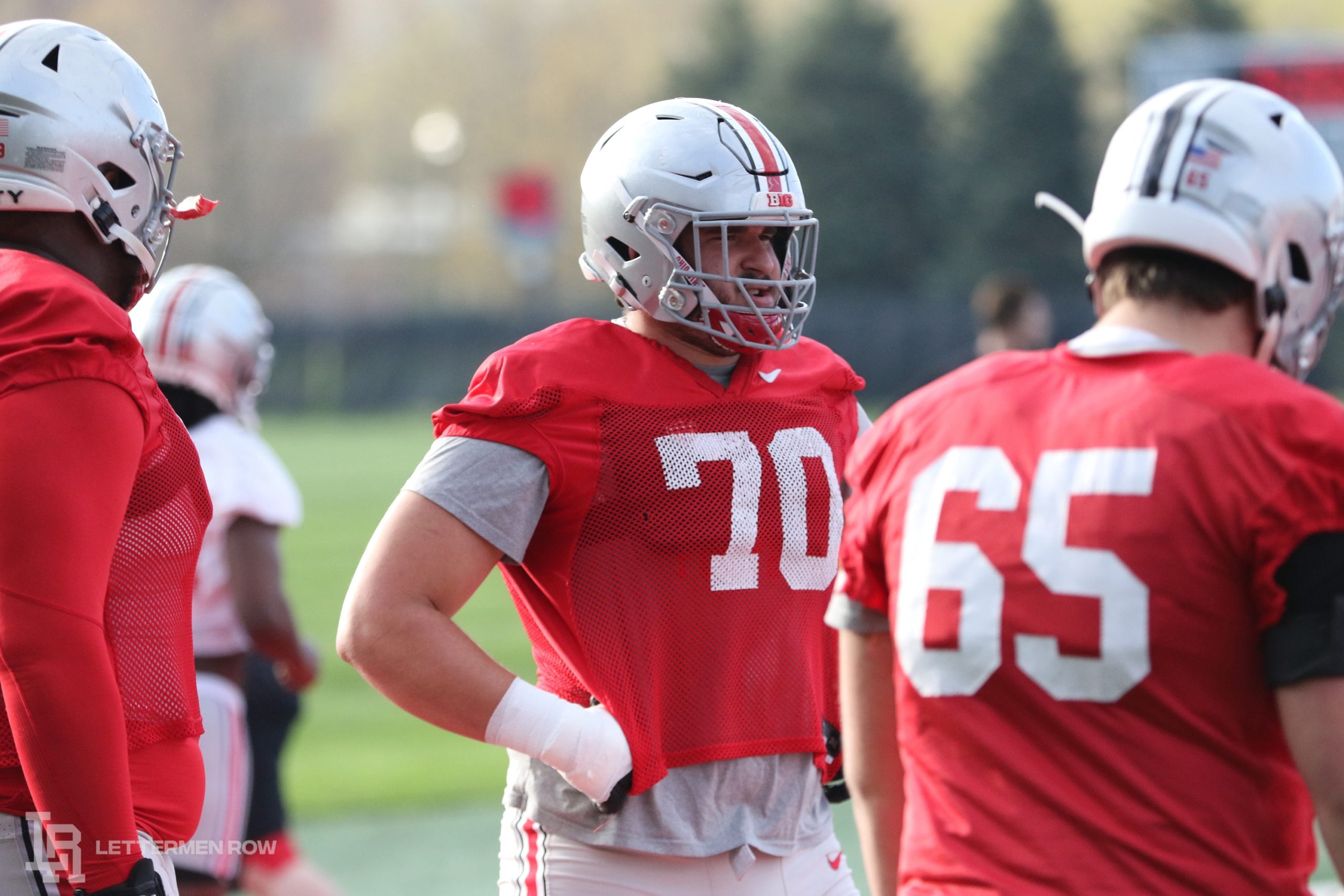 Josh Fryar is an emerging option at guard for Ohio State. (Birm/Lettermen Row)

COLUMBUS — Josh Fryar is showing up every day at Ohio State.

Even at summer camp.

Fryar has been one of the most visible Ohio State players at the one-day recruiting sessions this month. He has been out on the practice field nearly every day of camp helping prospective high school offensive linemen get better with drills alongside Buckeyes offensive line coach Greg Studrawa.

But that’s just about helping kids learn the fundamentals of being an offensive lineman. He also shows up every day for the Buckeyes summer workouts as a potential breakout star in a loaded offensive line room. The former three-star recruit was brought into the program as a potential developmental piece for one of the nation’s best units.

He has quickly turned into a real option to become the next starting left guard at Ohio State this fall.

“His athleticism is what excited me in his recruitment,” Studrawa said. “He was a basketball player, he’s a guy who is 6-foot-5 but has the ability to bend and play really low. Those two things were what intrigued me about him when we first got him in recruiting, and it’s only gotten better through training with [strength coach] Mick [Marotti]. Now he’s getting stronger, he’s got a little edge to him and he’s a guy who has some grit.

“He’s got some toughness, and he shows up every day.”

The Buckeyes offensive line has been a Joe Moore Award finalist unit in each of the last two seasons. After the success of the last two seasons, Studrawa and Ohio State must find a way to replace an all-American guard and an all-conference center before this fall. Paris Johnson will likely be the starter at right guard in place of Wyatt Davis. The starting left guard from last season, Harry Miller, has a chance to slide into the center role, leaving that left guard spot open. 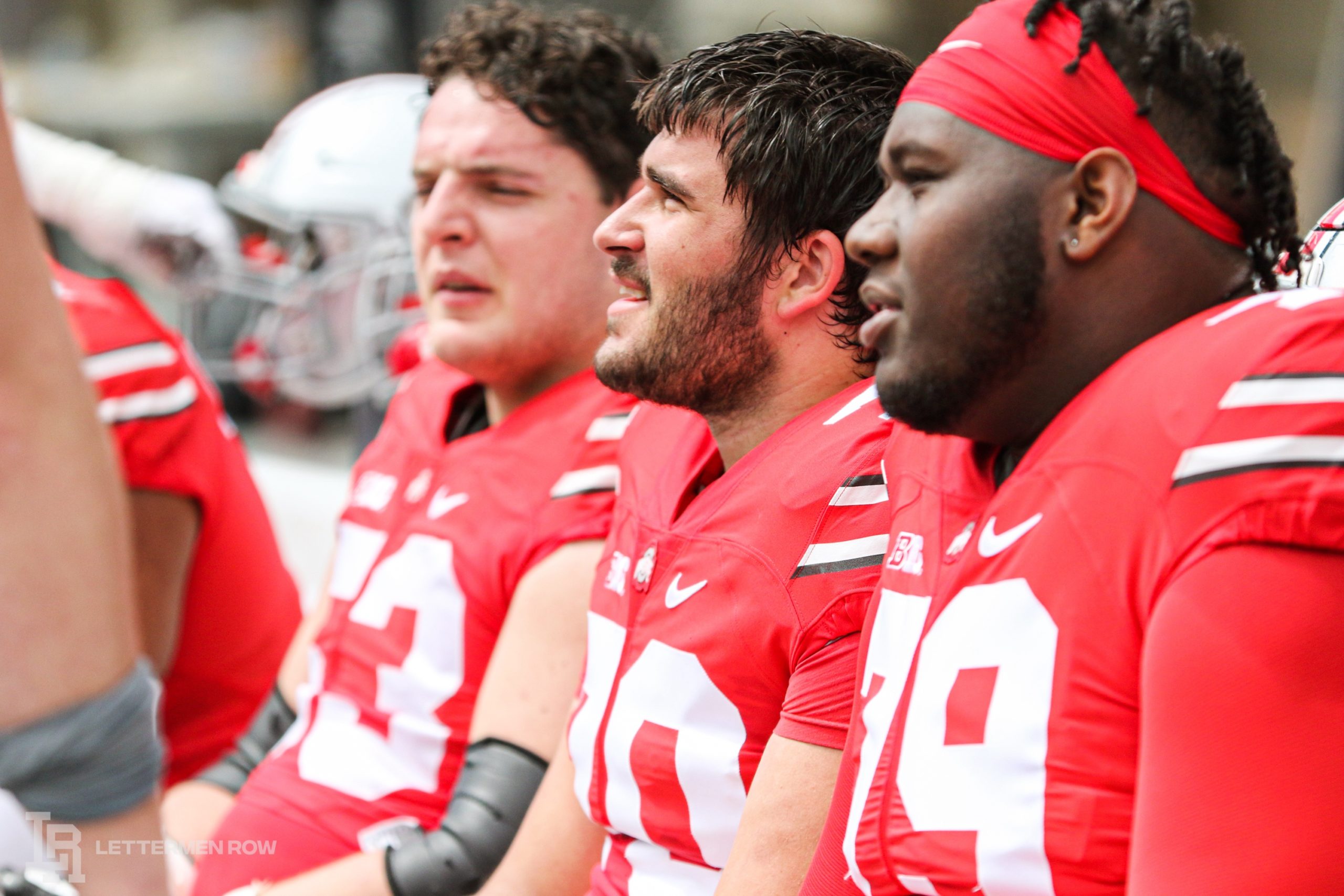 And that’s where Fryar enters the equation this summer, especially after a spring practice period that saw him earn plenty of first-team reps. He’ll take on Matthew Jones, the aforementioned Miller and others for the guard spot, a competition that may linger deep into training camp.

Fryar, who went through his first spring with the program and now enters his first normal summer after last year was restricted, is still developing. Maybe that’s what makes his push for playing time as one of the best five offensive linemen in the room even more impressive.

“Of all the guys we have in our room right now, there’s 11 guys that this is their first spring,” Studrawa said, including Fryar in that number. “Eleven guys. You think these guys are veterans and those things because they’ve been here, but they lost last spring, they lost last summer, they lost a camp. So they’ve lost a year of development. Here’s 11 guys that I’ve got a certain expectation level about, which is not going to change. It’s going to stay there.

“Then I realized: This is the first time that 11 of these dudes have gone through spring.”

The delay in development hasn’t slowed down Fryar or a number of other talented Buckeyes players making a move toward playing time. Fellow 2020 offensive line recruit Luke Wypler is certainly in the mix for a starting spot alongside Fryar. Plenty of others will have their chance.

But Fryar stood out as a breakout player earning first-team reps in the spring. That momentum from March and April is carrying into June, and he could ride that all the way into August as he makes a final push for a starting gig.

Whether it’s at camp helping kids learn the position or at his own workouts and practice learning the job for himself, Josh Fryar is showing up every day at Ohio State.

He has a chance to parlay that into a starting role much earlier than expected in his career.

“He’s learning, putting things together and he’s got some grit,” Studrawa said. “I like that, and that’s what has got him going.”