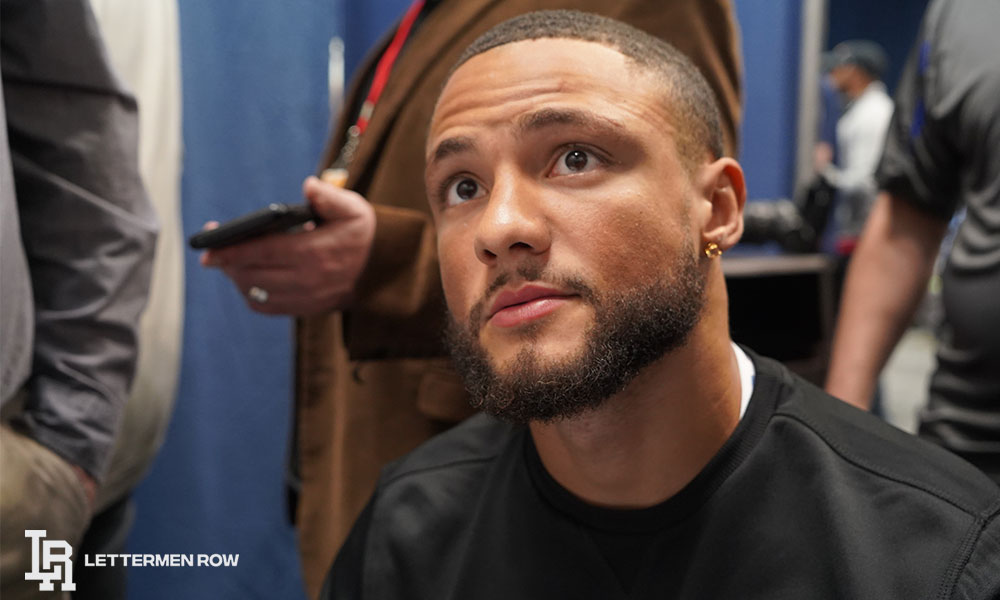 INDIANAPOLIS — Maybe the bet between former Ohio State wide receivers will continue and develop into an annual tradition.

Last year, it was Terry McLaurin, Parris Campbell and Johnnie Dixon betting on themselves when it came to their speed. This season, Austin Mack, Binjimen Victor and K.J. Hill will partake. Who will run the fastest 40-yard dash at the NFL Combine? That is still to be determined.

But the three-receiver competition in Indianapolis the new normal for the Buckeyes, and it shows the depth and development Brian Hartline is implementing into the room known as Zone 6. And each time that room restocks, even if it’s just for one season, the legend of Ohio State wide receivers continues to grow.

It’s more apparent than ever when the entire football world comes to Lucas Oil Stadium for the NFL Combine.

“We’re just different, man,” Mack said. “We’re built different, and our culture says it. Coach Mick [Marotti] and our strength staff are incredible. They instill in us a culture that we live up to. We play like that every Saturday.”

It’s not like Ohio State needs the NFL Combine to pitch how successful it has become. But it certainly doesn’t hurt.

The Buckeyes have become one of the most sought-after landing spots for the country’s top talent at wide receiver. The latest example of what the combination of Hartline’s coaching and Ryan Day’s offense can do for a wide receiver shows through in Mack. And Victor. And Hill.

All three are projected to run blazing 40-yard dash times. They’re all expected to show excellent ball skills and hands during drills. The trio aced their media interviews and are busy meeting with teams who could potentially use a draft pick on them throughout the week.

The credit can be distributed between their work ethic, the coaching staff’s development of talent and the machine that has been cultivated in Columbus.

“Working with Coach Hartline was the biggest thing I had going for me,” Hill said. “He taught me how to be a pro. It was not even from route running. He taught me things like accountability, being a great practice player. He’ll just tell us sometimes in practice: “Those things will get you cut in the league.” I feel like I got a jump on everybody just because he was my position coach.”

Hill, the all-time leading receiver at Ohio State, has already impressed scouts since the season ended at the Fiesta Bowl. His Senior Bowl performance catapulted his name up draft boards and landed him in good territory on some mock drafts around the internet. Mack and Victor, meanwhile, are entering the NFL Combine and the next few weeks that follow as generally unknown quantities to NFL scouts.

Mack needs to put his injury concerns to bed. Victor has a reappearing question of consistency to answer.

Both are ready to show they are worthy of a mid-to-late round draft pick.

“[I hope to prove] that I’m different,” Victor said. “I can do different things with my size. I just want to prove that I’m a ballplayer.”

The competition hasn’t stopped just because the talented trio left Columbus for the NFL. They’re all ready for whatever the NFL Combine throws at them, because they have been preparing for it since they arrived at Ohio State. Just like the three wide receivers from a year ago, all of them are trying to prove they belong on one of the 53-man rosters.

And just like last year, the former Buckeyes can have a little fun while showing huge numbers in Indianapolis. The bet on who will run the fastest 40-yard dash is already set. Dixon, who competed in it last year, is betting on Victor. Hill might be the odds-on favorite. Don’t sleep on Austin Mack.

The wide receivers from Ohio State can do those things. After back-to-back trios of pass-catchers showing impressive ability in front of scouts, the Zone 6 pipeline appears stronger than ever.

“I’ve been able to talk to [McLaurin] and some other guys who went through the same process last year, and it’s definitely given me a lot of confidence,” Mack said. “With [Parris] being here in Indianapolis, I was able to talk to him a little bit the last few days. I’m definitely confident. I definitely know what to expect, and I’m looking forward to the opportunity.”

Who’s going to win the bet?