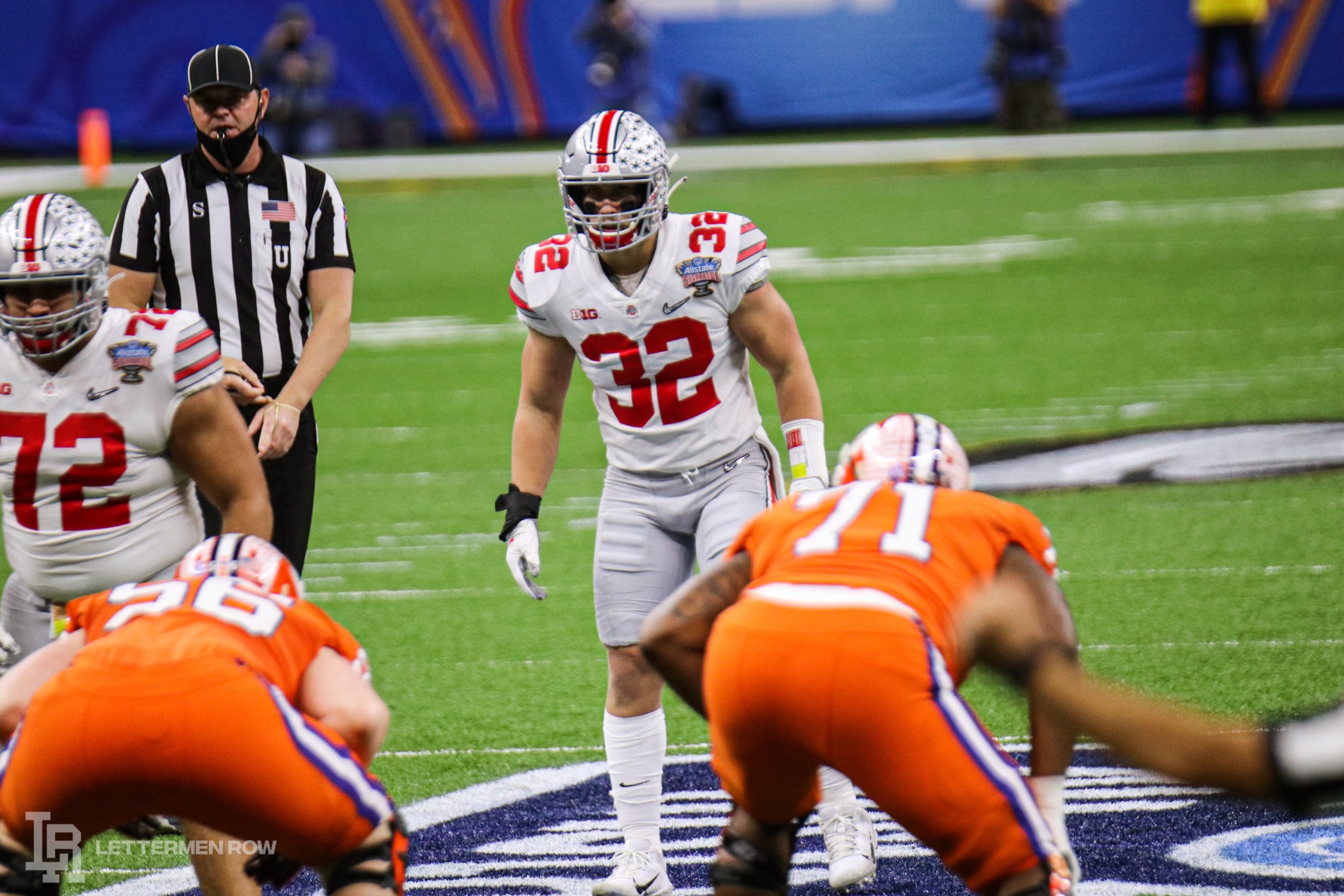 Not just to get to the national title game and earn a chance to play Alabama, but for the program as a whole. Ohio State had never beaten the Tigers before Friday night in the Superdome. So after the 49-28 demolition of the Tigers in the College Football Playoff semifinal, the celebration was on.

That game was what the Buckeyes trained for in the offseason, with eyes on revenge from the 2019 playoff game. But it was never the end goal. Monday night in South Florida, Ohio State will play for what it was really chasing: The national title.

“This is everything on the line, everything we wanted. So now all the focus goes on to Alabama. We’ve just got to prepare.”

The Buckeyes are preparing to take on Alabama in the national title game for the second meeting between these two programs since the College Football Playoff started in 2014. Ryan Day, Trey Sermon and Tuf Borland met with the media to preview the national title game, and Lettermen Row is breaking down What We Learned from them. 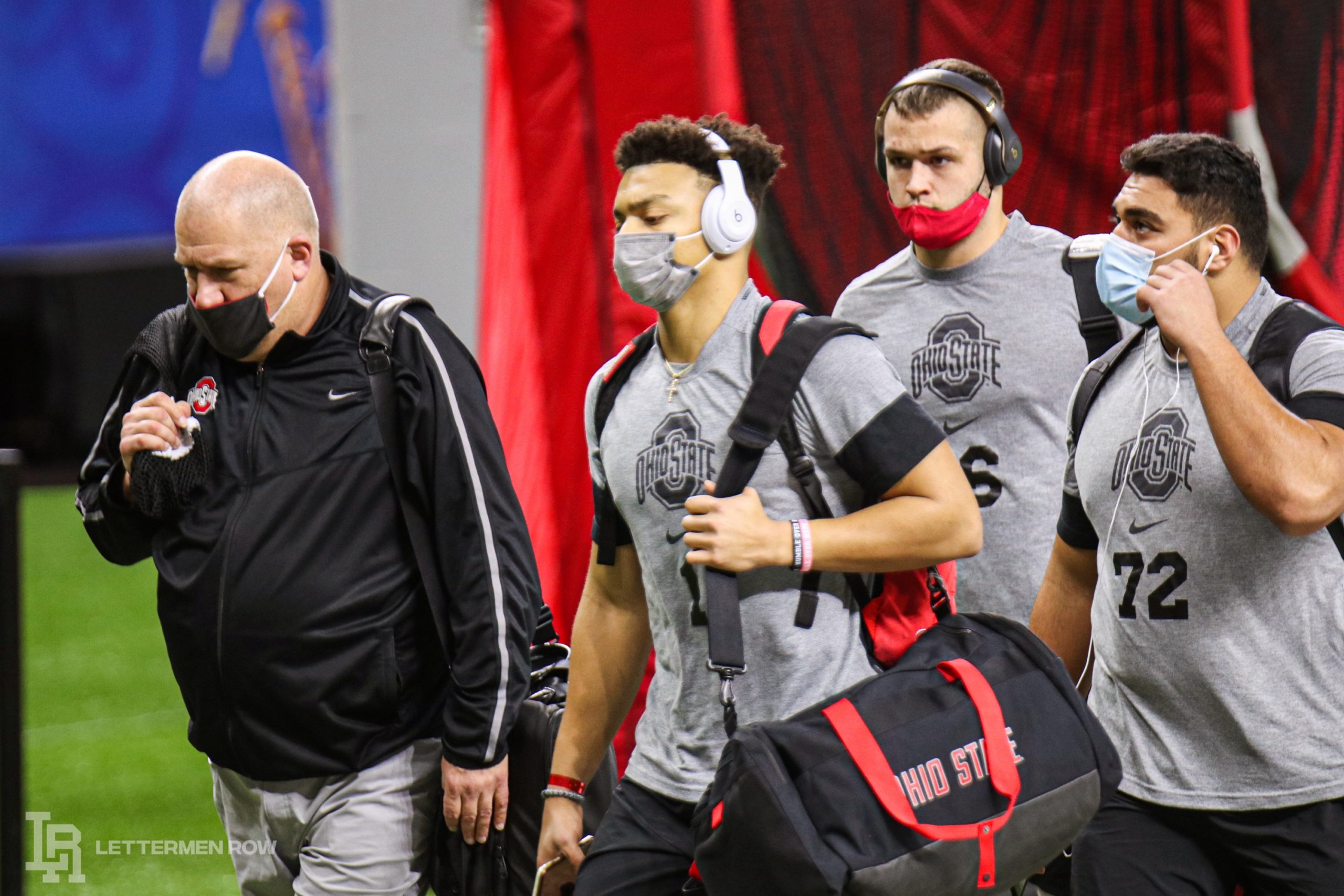 Justin Fields had his finest moment as an Ohio State quarterback Friday night in the Sugar Bowl, tossing six touchdown passes and 385 yards despite being in visible pain due to a shot to his rib area in the first half.

Fields toughed it out and played through the obvious pain. So it was expected the Ryan Day would field questions about the health of his quarterback. But Day isn’t worried. Fields is going to be ready for the title game.

“It was a pretty amazing performance,” Day said. “It was good the next day that actually his comment to me was that he felt better waking up in the morning than he expected. You know, we’ll keep working through the week and have a great week of preparation, get ready to play Monday night.”

As long as Fields is ready by Monday night, the Buckeyes have a chance to win a national title.

Ohio State has one of the most talented defenses in America. But the Silver Bullets haven’t been consistent for the entire season, giving up plenty of yards and points to teams that shouldn’t be able to move the ball on the Buckeyes.

But as the season has gone on, the confidence of the defense has continued to grow, helping Ohio State force two Trevor Lawrence turnovers, holding running back Travis Etienne to just two yards per carry and Clemson to just 28 points. The next massive challenge will be stopping Alabama. But these Buckeyes are ready for it.

“I mean, I think we’ve always had confidence in ourselves,” Ohio State senior captain linebacker and Sugar Bowl defensive MVP Tuf Borland said. “I think it just showed us kind of what we’re capable. I think we’ve always believed we can compete with anybody in the country on any particular week. We practiced against the best offense in the country every week, so we have confidence we can compete with everyone.”

Trey Sermon has become different back in last three games

Pieces didn’t seem to fit for the first four games of the season. Trey Sermon, the talented graduate transfer running back from Oklahoma, just couldn’t seem to find running room and averaged well under 100 yards per game on the ground.

But once Sermon started elevating his practice habits before the Michigan State game, he has been a completely different running back. He’s had at least 100 yards in all three games. He broke the school record for most rushing yards in a game during the Big Ten title game when he had 331. And he terrorized Clemson for 193 yards on 31 carries in the Sugar Bowl.

He has practice from the Michigan State week to thank for all of it.

“I just wanted to be able to contribute more and just make the most of my opportunities,” Sermon said. “I mean, I feel like before, I just wasn’t playing my best. It just kind of started in practice. I just started practicing a lot harder than I was, just trying to just do whatever I can to just help myself improve.”

Ohio State has only played seven games this season, and the offensive line that started the year has played fewer games than that together as a unit.

So how are the Buckeyes opening massive holes for Trey Sermon and giving Justin Fields enough time in the pocket to torture defenses through the air? Well, it starts in practice, where the Buckeyes offensive line is going against one of the best defensive fronts in the country. And that has prepared the five starters for whatever they might see in a game.

“I think it goes back to practice, and that’s the thing that we spend a lot of time talking about — because we weren’t playing in as many games we had to practice really hard,” Day said. “We had to practice against each other. The defensive line had to go against the offensive line, ones versus ones, and that was the only way we were going to get better fundamentally.

“It wasn’t always so much of a schematic deal. It was more about getting a pads down, hands inside, running feet, all the things that come with that. And that’s just the guys up front. I mean, linebackers, tight ends are the same way on the perimeter.”

If the Buckeyes are going to take down the Crimson Tide on Monday night, that practice will need to keep paying off up front.