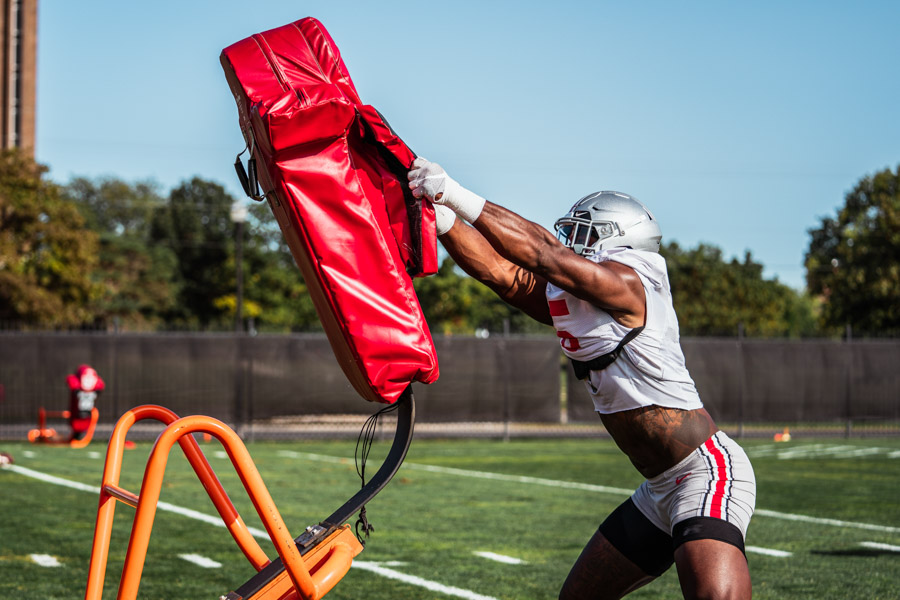 The Ohio State linebackers are one of the deepest units in the country. (Courtesy/Ohio State Dept. of Athletics)

COLUMBUS — Tuf Borland knows what Ohio State has inside its linebacker room.

The three-time captain for the three-time defending Big Ten champs has seen enough over the course of a small spring practice, a shutdown, the return to campus and fall camp so far to make an assessment of his unit.

To no surprise, it’s strong.

Ohio State might have the deepest linebacker unit in the country. Top to bottom, the Buckeyes have talent, experience and versatility. The hard part for Al Washington and the coaching staff is figuring out how to manage the embarrassment of riches in the room.

It’s not an easy task.

“You have to give a player a role, a focus and give them the opportunity to exercise that,” Washington said. “We are a deep group, but we are going to need, this year in particular, more than just three or four. Throughout the year, we have to develop because you never know what could happen with the situation that we’re in. Everybody has a role. Everybody’s engaged. I feel like this time period has really brought us closer. Everybody feels like they matter. Everybody has an impact in their own way.

“Our mentality going into the spring to now really hasn’t changed much. Our goal is just to get better every day and, when your number is called, get ready to play.”

The linebackers met with the media Thursday before the Buckeyes second padded practice of the fall. With just three weeks until kickoff of the season, they provided an update on their progress. Lettermen Row is breaking down What We Learned from the talent inside the room.

The versatility in the linebacker room starts at the top. Pete Werner and Baron Browning swapped positions, giving the Buckeyes a better opportunity to do more things in more looks defensively. But just because Browning and Werner switched spots in the base defense doesn’t mean they can’t swap again if need be.

Both players know both positions. It helps create more versatility across the board.

For Browning, the move to the outside gives him more freedom to make the athletic plays he has always been capable of. In a new spot, he could be in for a massive season.

“Baron’s athleticism, he can play inside,” Washington said. “He can play outside. He can do a lot of different things.” 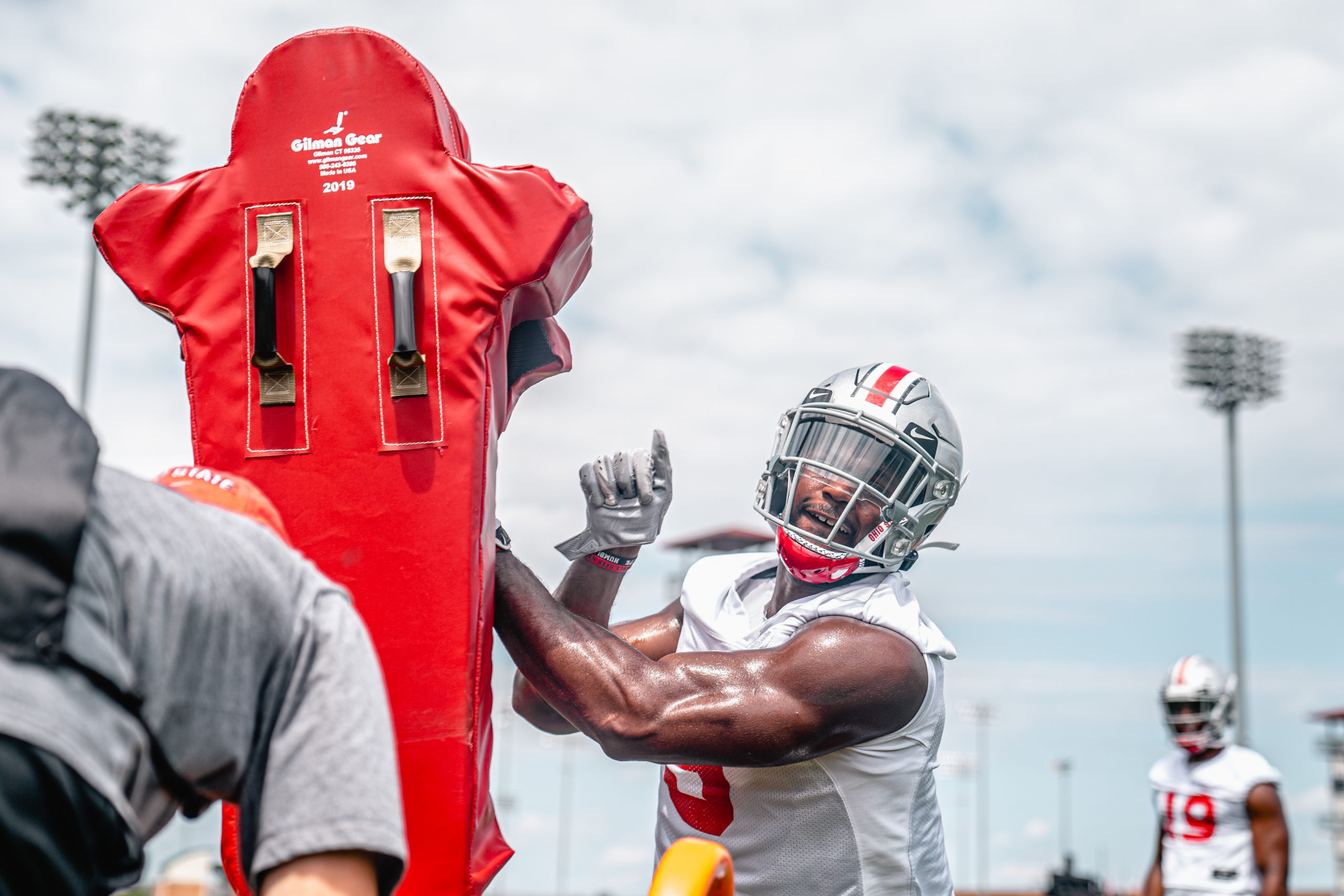 Linebacker versatility is key for matchups

The linebacker unit is one of the deepest on the Ohio State roster, and it might be one of the deepest and most talented units in the country. Seven returning contributors, a three-time captain, two other starters, a sixth-year senior and more-than-capable juniors highlight the room. Plenty of talented players are waiting for the logjam at the top to clear. Finding roles for everyone is tough.

That’s why the Buckeyes are going to use their depth and versatility to their advantage. They’re going to play linebackers based on matchups.

“We do have that depth,” Washington said. “And we do have guys with a variety of different skillsets. We can match up better. We can give guys roles and we can tame guys in the sense of, guys aren’t getting worn down, all that while playing great defense. That’s exactly what we would like to do.”

Ohio State has the ability to rotate talent on and off the field while switching roles for matchups. It can play multiple linebackers at multiple spots. The possible combination of linebackers on the field at a time are endless.

“It’s just going to put guys in different roles,” Baron Browning said. “Like for Pete going from SAM to WILL, me going from MIKE to SAM, I feel like it helps us show our versatility, that we are more than one-dimensional linebackers.”

Behind the trio of returning starters are three junior linebackers who have been stuck in backup roles for three years. That can be frustrating for all three of them, even when they are getting playing time.

They are all talented enough to start. But the depth chart is loaded.

“Dallas Gant is a skilled inside backer,” Washington said. “He has position flexibility. He can play [middle] and [outside] for us. His value for us is obviously to contribute meaningful minutes, but to help us in different types of ways. Teradja Mitchell is an explosive player. We’ve all seen that. A very passionate player. So those types of guys, we can find ways to get them closer to the ball and attack the football and get them to play to their strengths. K’Vaughan Pope is very athletic, very athletic in space. Very instinctive. There’s ways to utilize him.

“I don’t want to get too much into the scheme, but just knowing their attributes, we have to do a good job of putting them in position to play to their strengths. That’s how we envision utilizing them this season.”

None of them have wavered in their commitment to getting better and becoming contributors, no matter the role, starting or not.

All three will see the field this year. And their roles may be expanded as the season goes along. 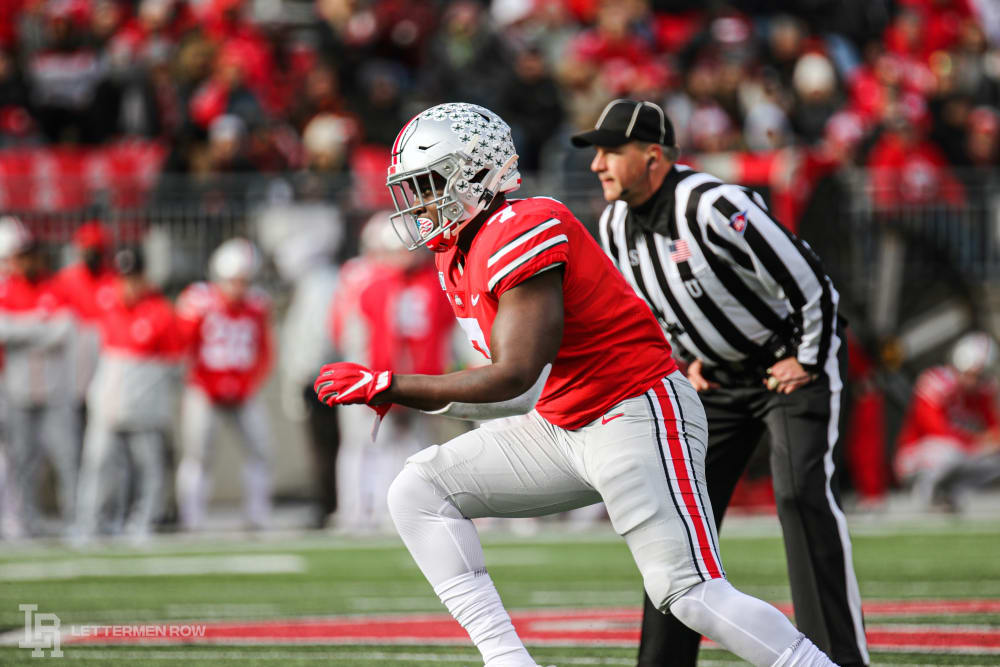 Teradja Mitchell is a breakout candidate for the Buckeyes. (Birm/Lettermen Row)

Al Washington was known as a good recruiter when he got to Ohio State from Michigan last offseason. And he proved that with the addition of Cody Simon and Mitchell Melton in the 2020 class. Washington has only seen the two freshmen for two days in pads, but what he’s seen out of them is positive.

The future of the linebacker room is bright.

“The freshmen coming in, I’m really excited about Cody Simon and Mitchell Melton,” Washington said. “Those kids are going to be special players. They’re both smart. They’re both tough, and they both love football. Very excited about the youth in the program. Those young guys, they just have to have an opportunity to get out there and play. When they get out there, they have to make the impact they know they want to make. Everything leading up to that, they’ve shown they’re capable, so I’m excited.”

Washington also singled out Craig Young and Tommy Eichenberg, two young players who have not contributed yet but could if called upon. The unit is deep, even down to the freshmen and second-year Buckeyes.