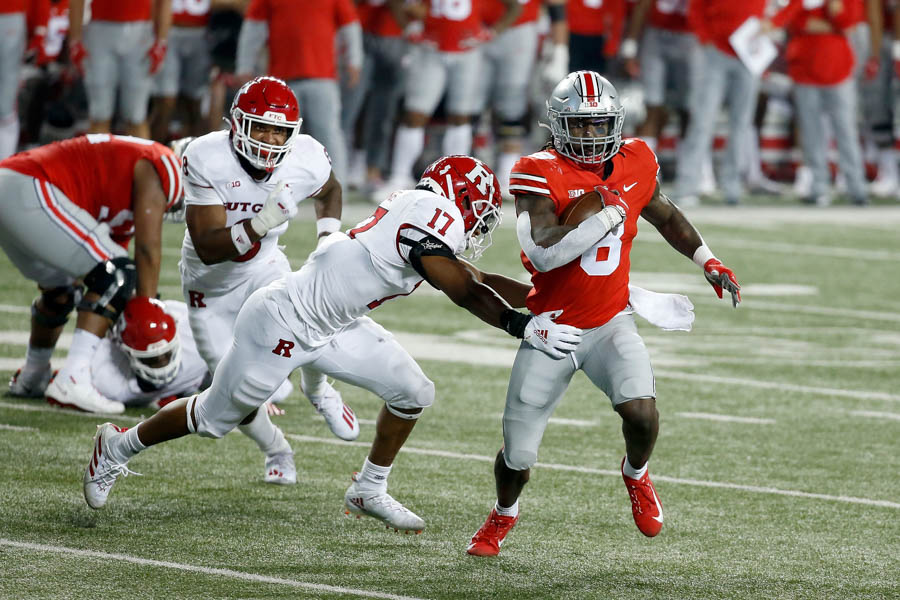 Trey Sermon could burst onto the scene for Ohio State against Indiana. (Courtesy/Ohio State Dept. of Athletics)

COLUMBUS — Trey Sermon was finally showing a flash of the reason Ohio State grabbed him out of the transfer portal.

Sermon was running aggressively with his pads low. He seemed to be running with confidence and purpose. He was showing that he can be as explosive for the Buckeyes as he was for Oklahoma for the last three years.

But then his head hit the turf, and Sermon exited the game. With an undisclosed injury, Sermon didn’t return. Last week, Ohio State coach Ryan Day indicated Sermon was going to practice, but his status for the game against Maryland was still uncertain.

“We plan on having him for practice this week,” Ohio State coach Ryan Day said last week. “We’ll see how it goes as the week goes on.”

Even with the positive vibes from Day, Sermon wasn’t a lock to be 100 percent at kickoff on Saturday. Then the Buckeyes game against Maryland was canceled, and Sermon had an extra week to get better and be ready for a top-10 showdown this Saturday against Indiana.

And if he runs against the Hoosiers like he ran against Rutgers, Sermon could be due for a massive breakout performance.

“I think he’s getting better with each opportunity,” Day said. “But it’s been a while since he’s played, and he didn’t have the spring and the preseason, so he’s similar to some of the other guys. But I think he’s gotten better as he’s had the opportunities.”

With an extra week to practice, Trey Sermon could be on the brink of a huge game for Ohio State — and against a top-10 opponent no less. But he’s not the only Ohio State player who could use the extra time off to his advantage. Lettermen Row is breaking down other Buckeyes who can use the time wisely to be ready for when the No. 9 Hoosiers come to Columbus. 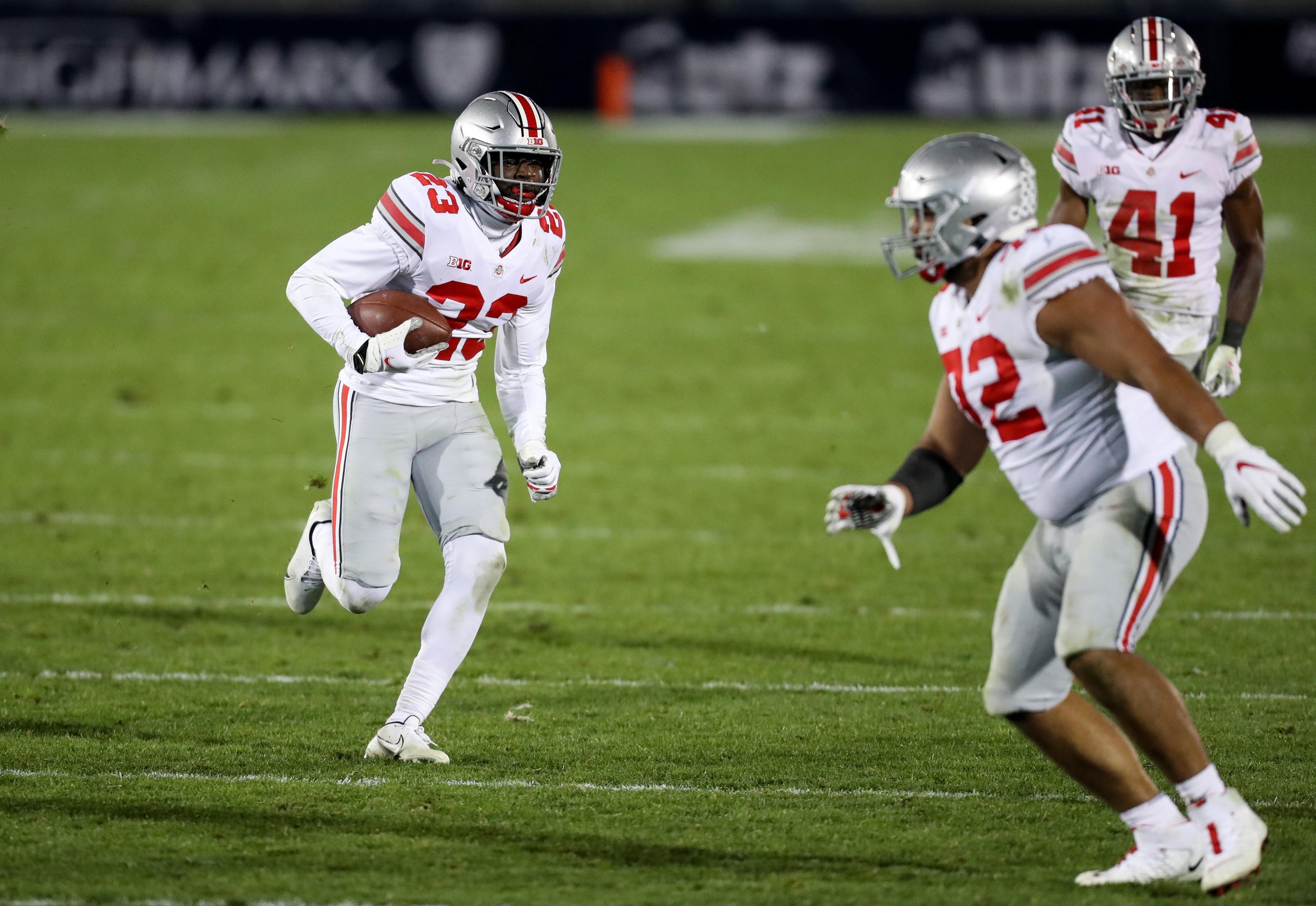 Through three games, the Buckeyes defense has had its moments of promise and its moments of needing improvement. After losing Jordan Fuller to the NFL after last season, the Buckeyes had a massive hole to fill at safety, one that Marcus Hooker is working to fill. Hooker had a huge interception to close out the Ohio State win at Penn State on Halloween, but he had some forgettable moments against Nebraska in the opener and against Rutgers in Week Three. With the idle week coming unexpectedly, Hooker has a chance to shore up his angles, tackling and assignments before the top-10 matchup. He’ll need to if Hooker is going to keep being counted on to be the eraser for the Silver Bullets defense.

Ohio State has one of the best offensive lines in the country. Led by center Josh Myers and right guard Wyatt Davis, the Buckeyes are fantastic at protecting Justin Fields and opening holes for the running back tandem in the backfield. But in the win over Rutgers, sophomore guard Harry Miller struggled through the first half with three holding penalties and a couple other plays that could have been called as flags. With an extra week of preparation that he wasn’t expecting, Miller should be ready to handle the duties at guard against Indiana — and clean up those holding calls. 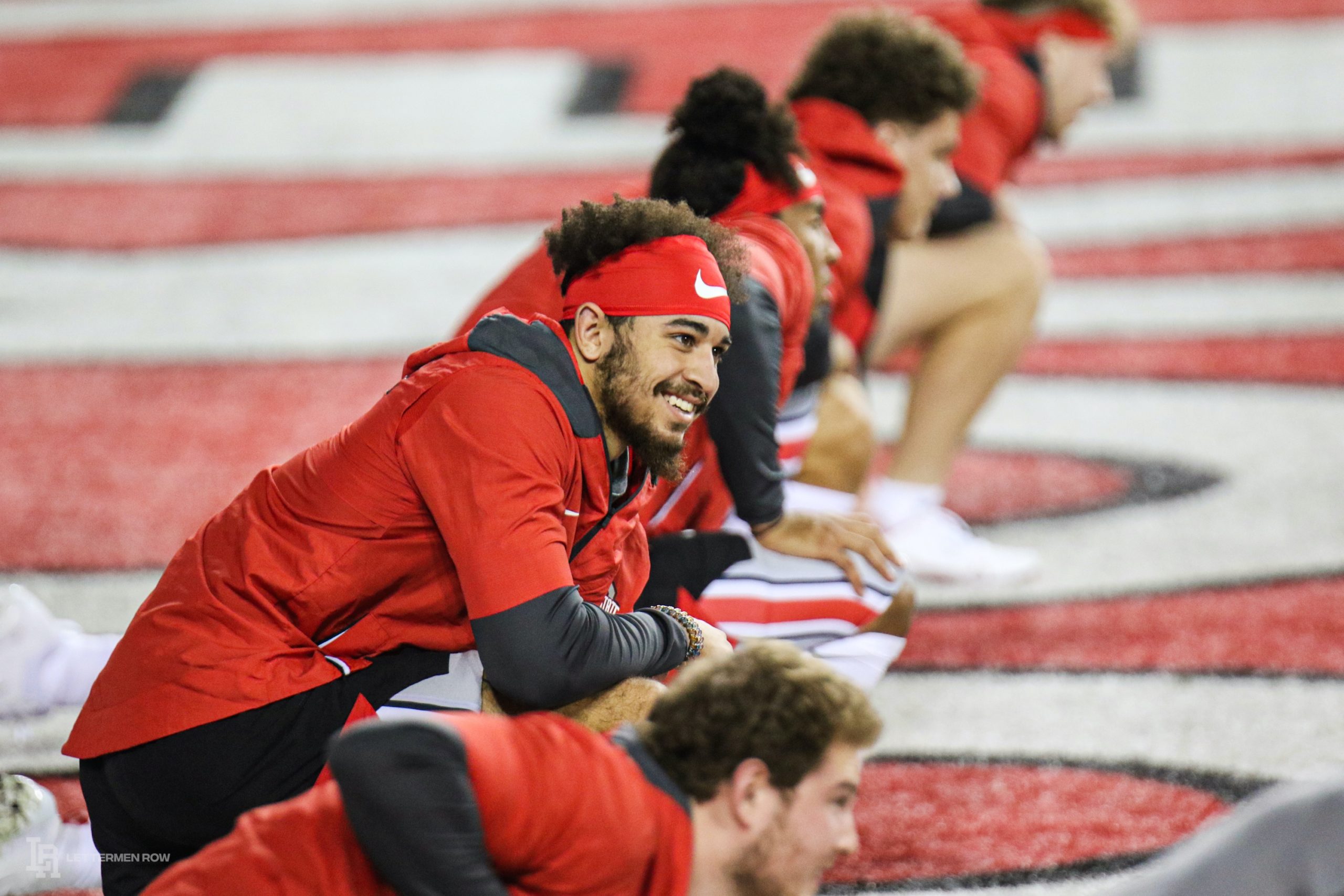 Ohio State freshman wide receiver Julian Fleming could be due for a breakout. (Birm/Lettermen Row)

Ohio State soon-to-be superstar freshman wide receiver Julian Fleming certainly isn’t lacking confidence. But after the win over Rutgers, Fleming could use a big bounce-back performance. Fleming, the No. 1 receiver in the 2020 recruiting class, could have probably scored a touchdown against Rutgers. But a could-be scoring pass from Justin Fields, which would have been Fleming’s first big play as a Buckeyes wide receiver, turned out to be a dropped pass over the middle that hit Fleming in the hands. The confidence and talent are still there for Fleming. The week off could provide a chance to regroup and make his mark as a freshman next week.

Ohio State has dominated in the trenches on the defensive side of the ball through three games due to Tommy Togiai’s rise and the sudden emergence of Haskell Garrett as a force at three-technique. But one name is missing: Taron Vincent. The former five-star prospect was slated to have a big year last season before an injury sidelined him for its entirety. Now this season, Vincent appears to be battling more injuries and can’t seem to stay healthy for the Buckeyes. But if he can use the off week to polish his skills and be 100 percent heading into the final four games of the year, the Buckeyes defense will be better for it. Vincent can have an impact — if he can stay on the field.