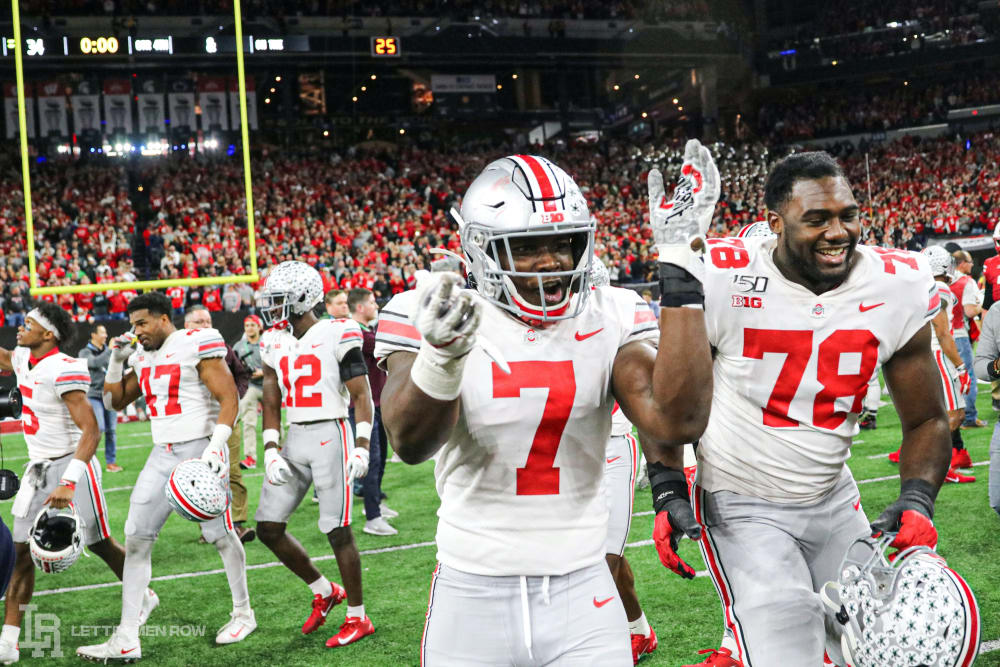 Ohio State linebacker Teradja Mitchell could have a breakout season with the Buckeyes. (Birm/Lettermen Row)

Ohio State had one of the best seasons in program history last year, and it came with the help of some young players. Now as the younger Buckeyes enter another year for the Buckeyes, they may be expected to take on expanded roles. Lettermen Row is breaking down a play from each key inexperienced Buckeye and how it can help provide a glimpse into each of their futures. Next up: How Teradja Mitchell can finally break through in a crowded linebacker room.

COLUMBUS — Teradja Mitchell has been waiting patiently at Ohio State.

It seems now to be only a matter of time before he bursts onto the scene and becomes a star for the Buckeyes defense. But in a crowded linebacker room like Al Washington and the Buckeyes currently have, it won’t be a conventional stardom for the third-year Buckeyes linebacker.

Although spring camp has been lost due to the COVID-19 outbreak, the Buckeyes remain focused on finding unique ways to use the bevy of talented linebackers in the room. Of course, Tuf Borland and Pete Werner are going to be leaders for the unit. It’s easy to picture Baron Browning in an outside linebacker role. And sixth-year senior Justin Hilliard began to carve out a spot last season.

And then there’s Mitchell, Dallas Gant and K’Vaughan Pope, who have all been waiting to finally bust out and make a difference. Mitchell might be the most likely candidate for that.

He knows it. And everyone in the linebacker room can sense it. After an injury-filled year last season, Teradja Mitchell is going to make an impact for the Ohio State defense in 2020. He’s been building toward it. Now, the time is coming to finally break free and become a key player.

“Teradja Mitchell is a beast,” Hilliard said. “Everyone sees it. He’s one of those high-twitch guys, always going, loves to hit. So [like with Pope and Gant], his time’s coming, too.”

The play: The game was well out of hand. Mitchell and the second-team defense were doing a good job of getting off the field, just as the first-team defense did throughout the first half of the blowout win over Rutgers in November.

It was a sleepy beginning to the second half, when Rutgers quarterback Johnny Langan tucked the ball and scrambled, trying to pick up a meaningless first down. And then Mitchell met him in the open field and demolished him.

Teradja Mitchell can be a big-hitter for Ohio State.

The hit was even more impressive coming from the open field, where an athletic quarterback like Langan might be able to make a move and escape Mitchell. But instead, Mitchell’s helmet met Langan’s chest, the crowd gasped and Mitchell got up to celebrate his massive hit.

It may have just been one play against one of the all-time bad Big Ten teams, but Mitchell has proven that he is a big, physical linebacker who can stop the run and plug any hole that needs it.

Maybe he’d have made more plays like the one against Rutgers if he was healthy for the full 14 games last season. But the tackle of Langan was more than enough to show what Teradja Mitchell is capable of in 2020, when he’ll be recovered and ready to be a breakout star for Ohio State.