The College Football Playoff. Clemson on the opposing sideline. A chance at redemption after the heartbreak from last year.

Friday night in the Superdome was about Justin Fields. And after the confetti settled, the MVP trophy was awarded and the Buckeyes hoisted the Sugar Bowl trophy, the focus was on the team.

But the moment belonged to Justin Fields.

“It means a lot,” Fields said after the emphatic 49-28 win over the Tigers. “I was really just going out there playing for God and playing for my brothers, not even myself.  Coach [Ryan] Day deserves it, everybody in this program deserves it just by the way they handled with everything that happened in 2020. And it’s definitely a great way to start 2021. So I’m excited.”

Fields was a tactician with the ball all night. Even after taking a shot to the ribs in the second quarter, lying on the ground in pain and eventually going to the medical tent, Fields continued to torch the Clemson secondary, which had no answer for the Buckeyes passing attack.

He stayed tough when he was going through pain. But after his lackluster performance in the Big Ten title game and the journey it took to get to the College Football Playoff during this wild and unpredictable season, Fields wasn’t going to sit out due to an injury.

He was going to continue to dominate and prove he was the best quarterback on the field in a stadium that had Trevor Lawrence on the other sideline.

“The conversation we had was: ‘You go out and play good in this game and you win this game, nobody is going to remember the Big Ten championship game,'” Buckeyes coach Ryan Day said. “They’ll remember this one. And they’ll remember it for a long time in the history of Ohio State football. And what does he do? He goes out and he throws six touchdown passes. He takes a really tough hit. He just looked at me, and I said, ‘How are you doing? Are you going to be able to make it?’ He said: ‘I don’t have a choice; I have to.’

“At that point, we had to figure out what he could and couldn’t do for a while. We kind of figured that part of it out. He couldn’t do everything, but what a gutsy performance, what a tough and special young man Justin Fields is.”

Fields certainly was special in the Buckeyes triumphant Sugar Bowl win over Clemson, but he wasn’t the only playmaker to shine. Lettermen Row is passing out Buckeye Leaf awards for the huge semifinal win. 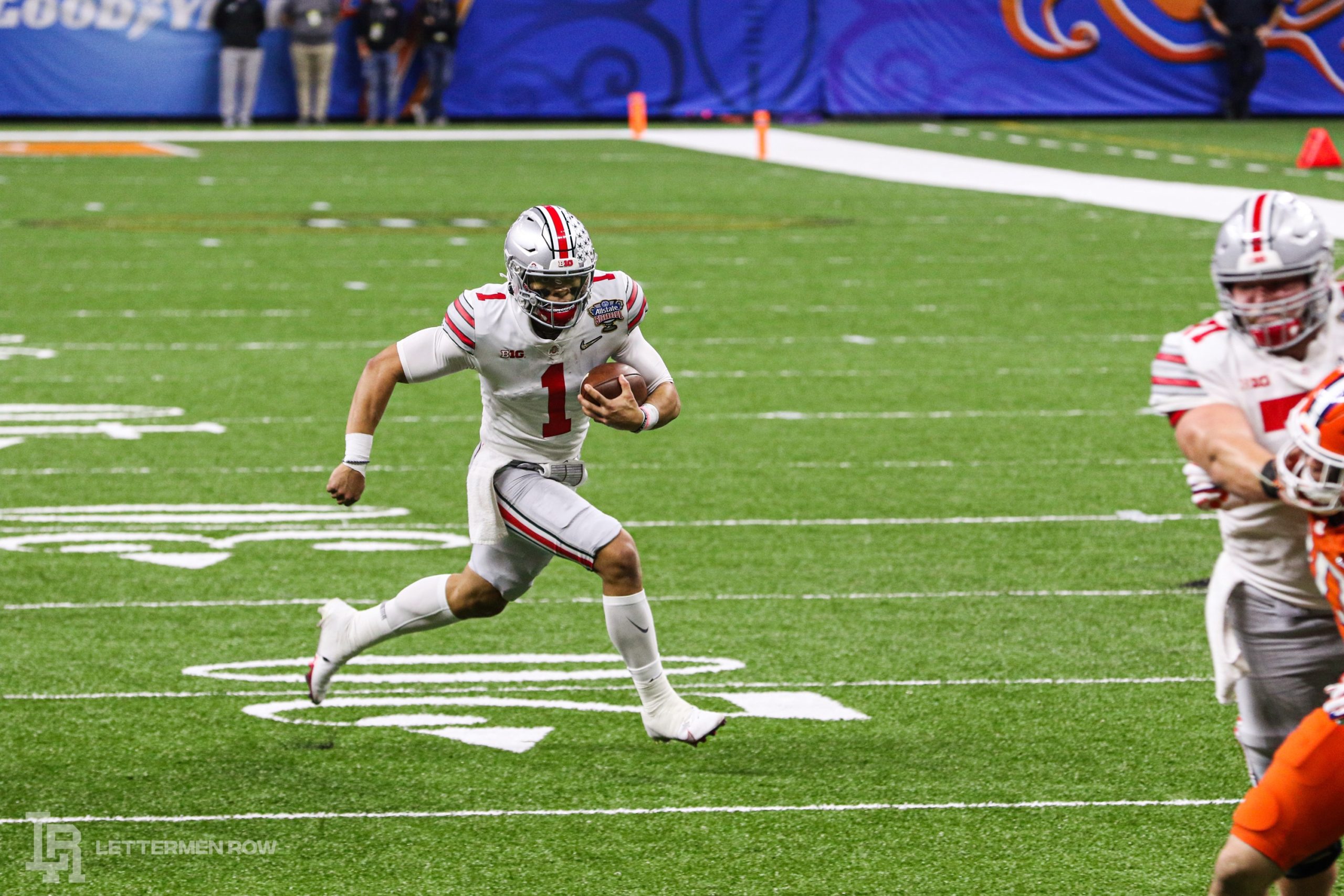 Justin Fields was dominant for the Ohio State Buckeyes in the Sugar Bowl. (Birm/Lettermen Row)

Ohio State needed Justin Fields at his best in the Sugar Bowl. But maybe even the Buckeyes couldn’t predict they would get this version of their quarterback. Fields was historically good against Clemson, throwing for 385 yards and six touchdowns, including three to tight ends, a 56-yard touchdown pass to Chris Olave and a 45-yard dagger in the fourth quarter to Jameson Williams that put the game out of the Tigers reach for good. Most of that all happened after Fields made a trip to the medical tent following a brutal hit to the ribs on a scramble. The Buckeyes needed an incredible performance from their starting quarterback. They got even more than they could have hoped. 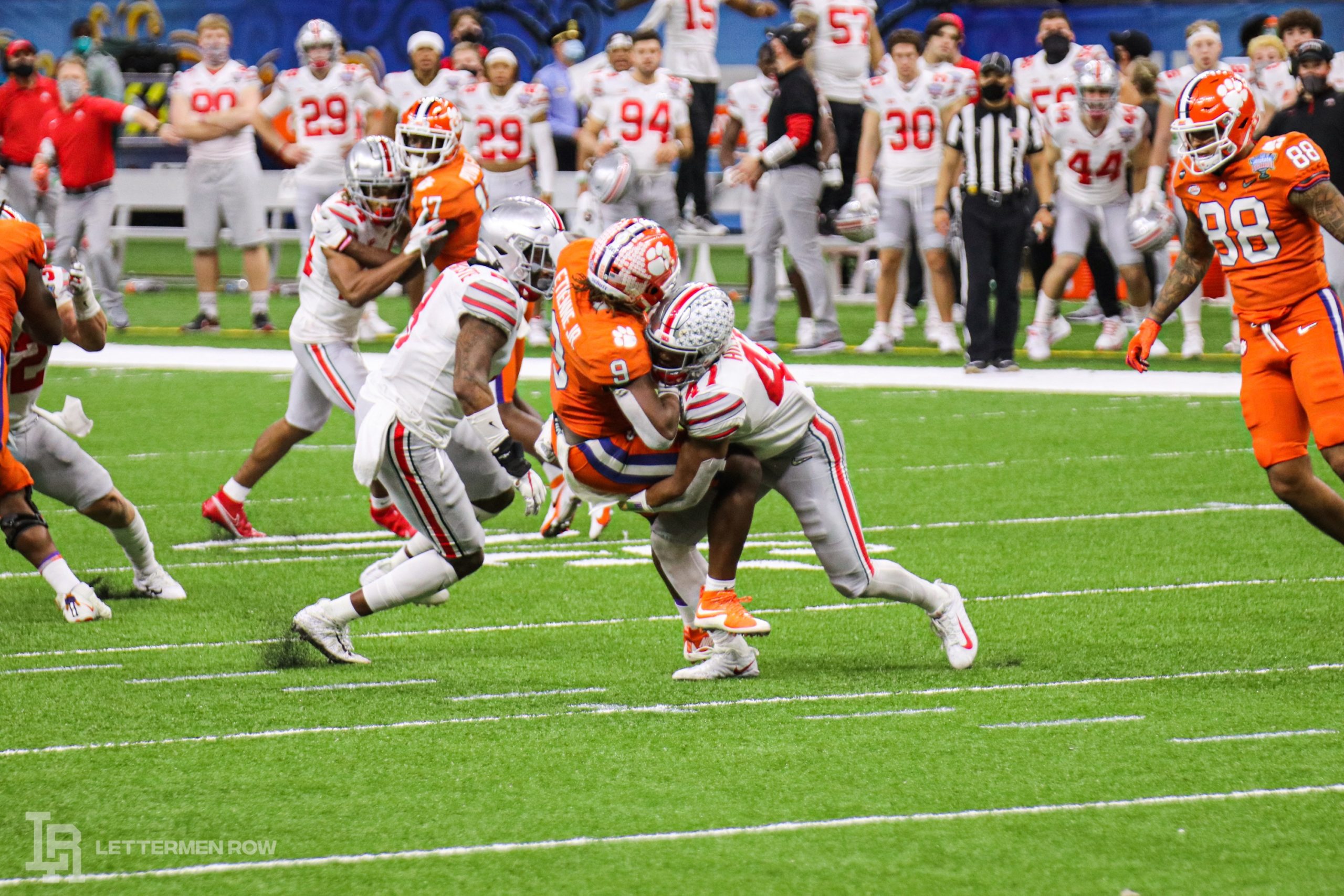 Justin Hilliard saved his best football at Ohio State for the championship stretch of his sixth season. Hilliard was yet again one of the best players on the field for the Buckeyes defense, setting the edge, bringing down Clemson running back Travis Etienne and helping wherever he could Friday night. The former five-star prospect had eight total tackles, a tackle for loss and a fumble recovery when Trevor Lawrence put the ball on the turf. Hilliard was impressive against Northwestern in the Big Ten title game two weeks ago. He elevated his game yet again in the Sugar Bowl. And next Monday night in Miami against Alabama, he’ll need to elevate his game again. 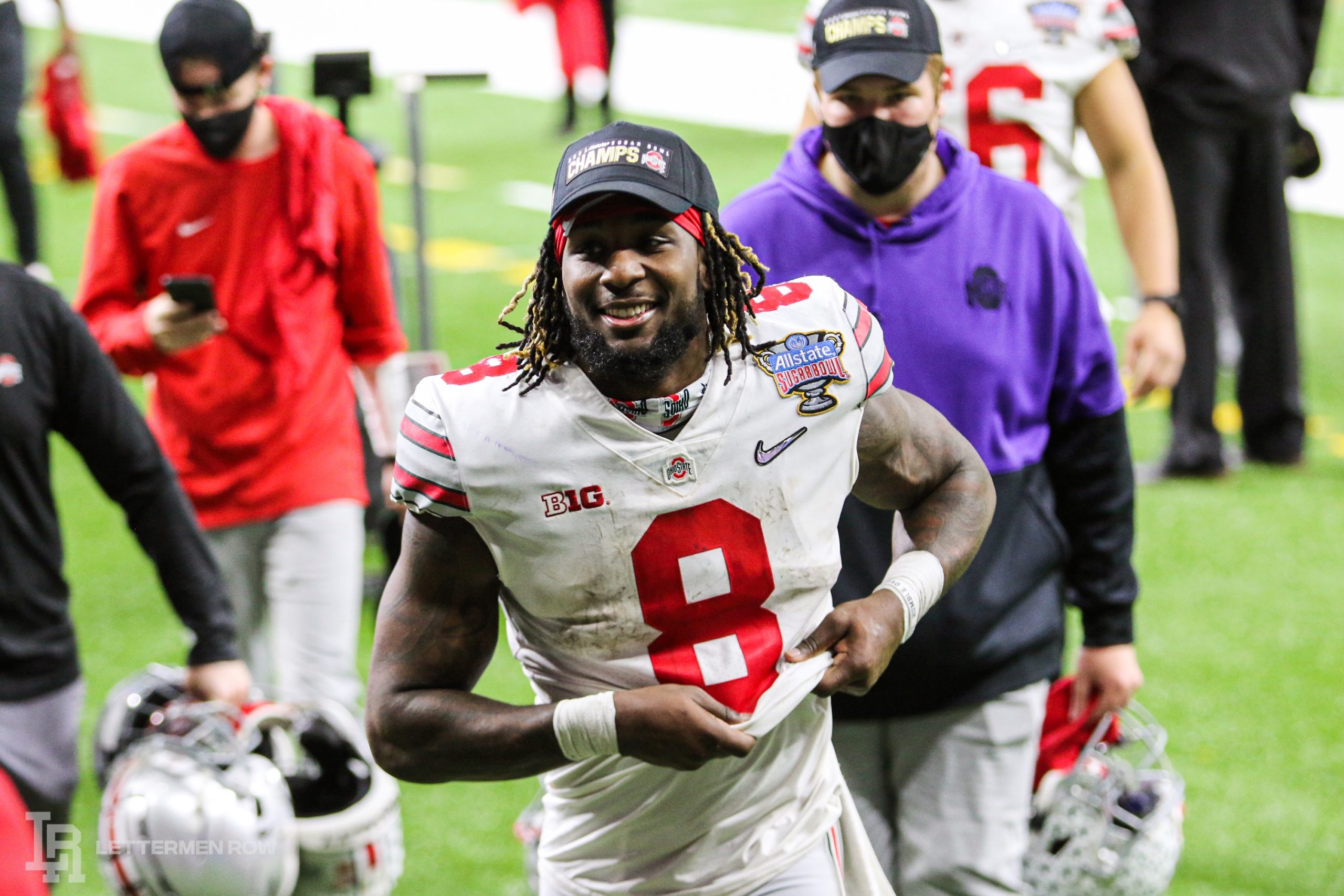 Sermon was incredible for the Ohio State offense again, but his biggest play may have come on special teams. Clemson had just scored a touchdown to cut the Ohio State lead to just 14. For some unknown reason on the ensuing kickoff, Demario McCall didn’t catch the football and let it bounce around in the field of play, apparently not realizing it was a live ball. That’s when Trey Sermon saved the day and helped the Buckeyes keep possession by jumping on the ball before Clemson could. If Clemson would have recovered, it could have made the Sugar Bowl a one-possession game. After McCall’s gaffe, Sermon made sure the Tigers didn’t have that chance.