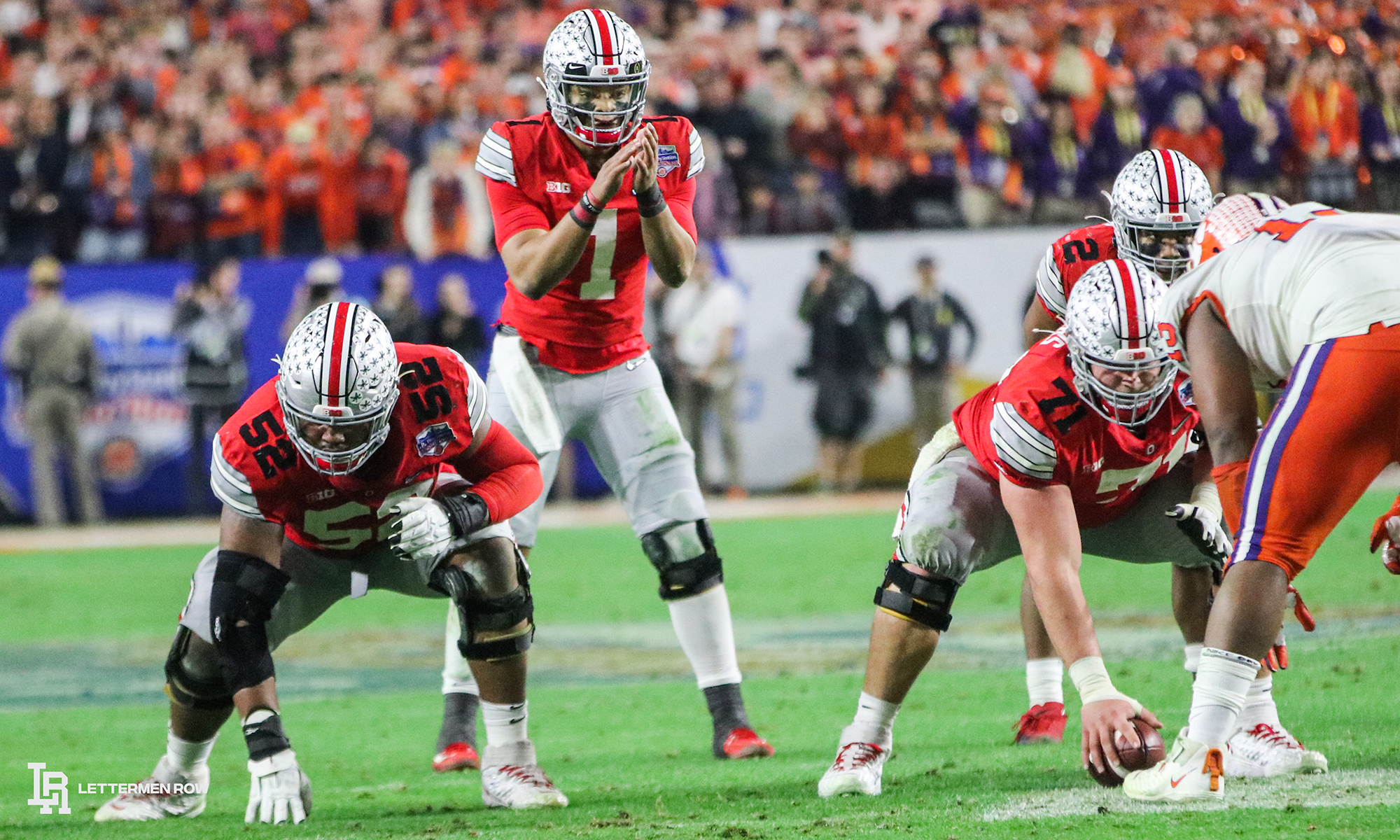 The Ohio State offensive line will have to be great against Clemson. (Birm/Lettermen Row)

It saw one last year against this same Clemson team. And the Buckeyes faced two this season in wins over Indiana and Northwestern. Maybe those teams aren’t as skilled or talented as what the Tigers bring to the interior, but the live game reps against a certain scheme in a year where live game reps have been hard to find are valuable.

Concerned about the Buckeyes ability to handle business up front Friday night in the College Football Playoff semifinal at the Sugar Bowl? Save the worries. The Ohio State offensive line has been waiting all year for this challenge. And they’re ready to take advantage of the opportunity to keep Justin Fields clean and let Trey Sermon run free out of the backfield.

The Buckeyes offensive line has heard the concern. But last time they were doubted, that group paved the way for 331 rushing yards for Trey Sermon and a second-half comeback. The Ohio State offensive line feels confident going into the test against Clemson.

“There’s always talk each year,” All-American guard Wyatt Davis said. “I feel like it’s the same thing that we come across each year after the first couple of games. ‘Oh, we can’t run the ball, can’t run the ball. The offensive line can’t block.’ And just to really have a solid game where we were put in the position where we had to run the ball in order to win … [Northwestern] was doing a great job holding us and holding Justin from passing all over the place. So really, just having that feeling of putting the team on our back and we said: ‘Hey, guys, this is why we came here.’

“We have a saying: This is always on us … It’s always on the line and who controls the line of scrimmage.”

The Buckeyes biggest test of the season in the Sugar Bowl will be handling a Clemson front that seems to give every offense it faces fits on the line of scrimmage. And yes, the Buckeyes have given up sacks when faced with immense pressure against the better defense it has faced. And yes, Clemson defensive coordinator Brent Venables will blitz at will against Davis, Josh Myers and the Ohio State offensive line.

But those veterans, along with the two dominant tackles Nicholas Petit-Frere and Thayer Munford, left guard Harry Miller and anyone else who could possibly be on the field for the offensive line, are ready for the challenge.

“Knowing that you’re going to see some things that you maybe haven’t seen before. That’s part of it.”

Of course Clemson is going to come after Fields and try to force him into tough situations. That’s the job of the defense. 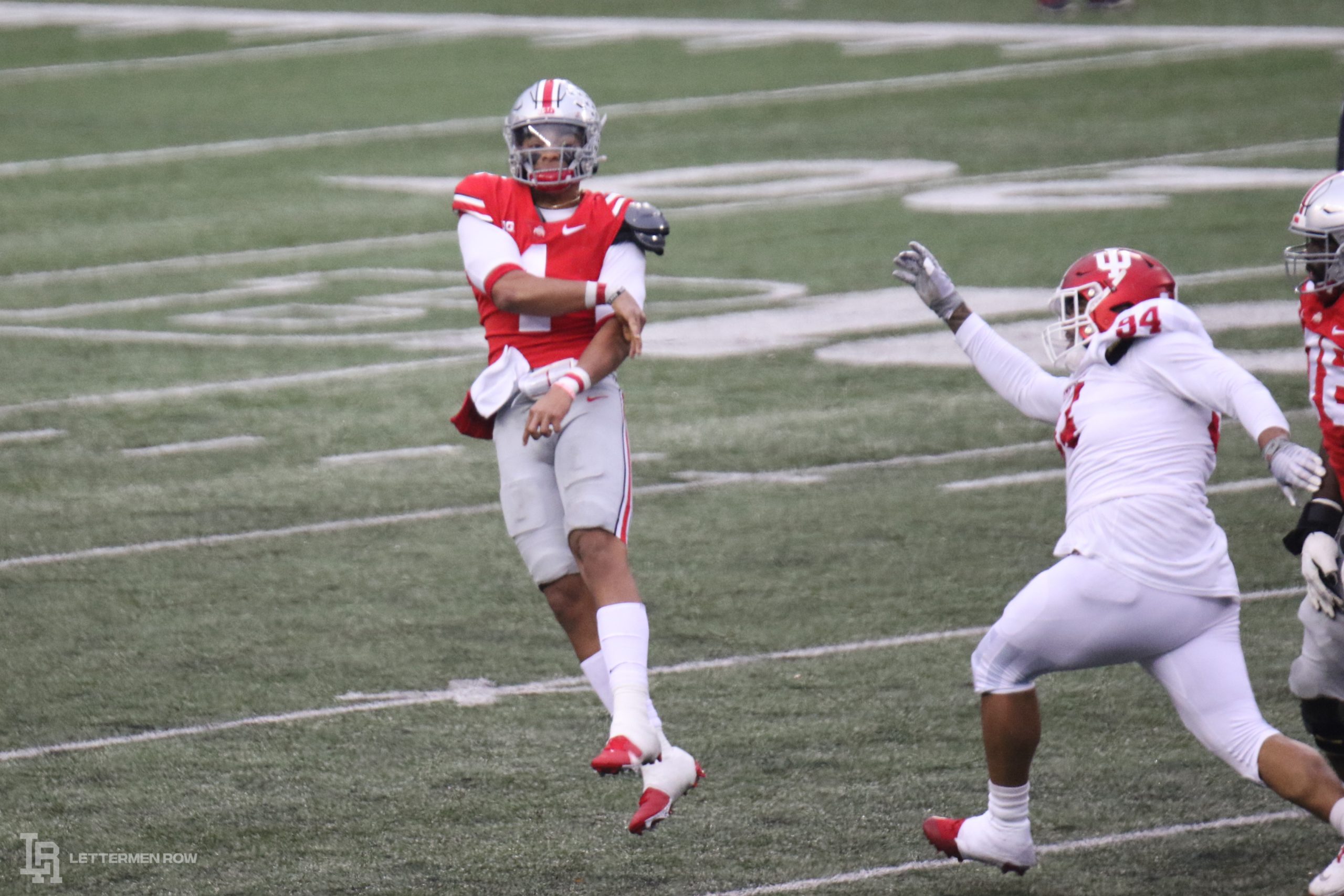 And the Ohio State offense will have its collective hands full with the Clemson pass rush, which seems to come from all angles much like the Indiana pass rush did in November. But the five offensive linemen have certainly learned from the negative experience that came with facing the Hoosiers. And that experience could translate into better communication among them when it comes to handling the Tigers.

Justin Fields is one of the best quarterbacks in Ohio State history and is currently one of the top signal-callers in the country. If he has time, the Buckeyes have success. When he is pressured, the Buckeyes struggle to generate the big, back-breaking plays that make the offense so hard to stop for 60 minutes.

Ohio State does not fear what the Clemson defense will throw at the offensive line in the trenches. The Buckeyes embrace the challenges the Tigers will pose.

They’ve seen the blitz packages from Clemson before. And they’re confident they can handle those exotic looks and come away with a better result this time around against the Tigers.

“We had a whole winter offseason program dedicated to this game,” Davis said Monday. “Clearly what we’ve seen all week, and I’m sure what all of you have seen this week, we’re going into this game not respected at all. That adds a lot of motivation.”

Save the worries for later. Wyatt Davis and the Buckeyes offensive line are ready for the challenge.