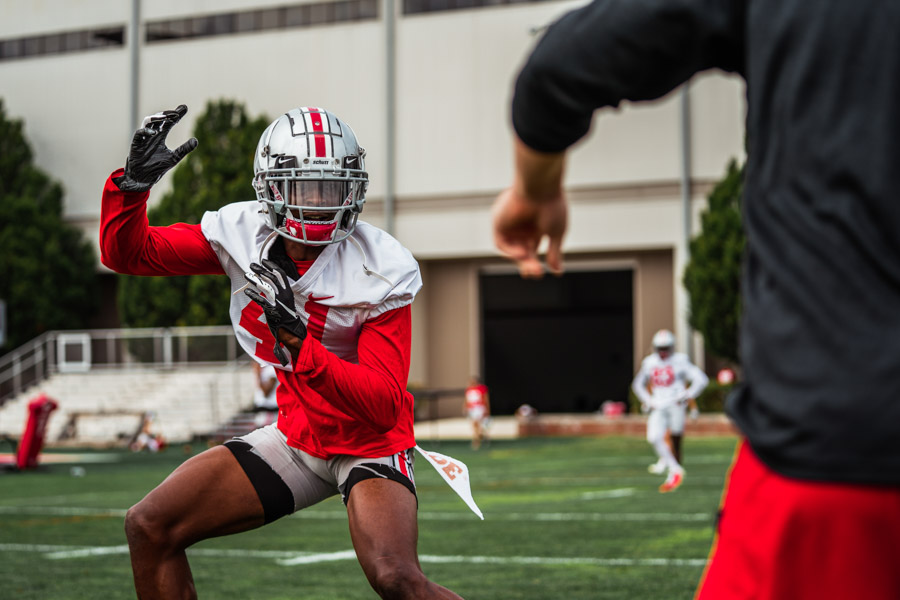 But Ohio State rarely has to replace a player who had as big of an impact on an entire defense than Jordan Fuller. That’s the task still being sorted through at the Woody Hayes Athletic Center for the Buckeyes.

There are fewer than 10 days left until the season-opening Big Ten game against Nebraska. Ohio State still has to figure out who will replace Fuller, the eraser of the defense last season, team captain and steady hand in the back-end as the last line of defense in a one-high safety look.

“I thought as highly of Jordan as I’ve ever thought of any player,” safeties coach and special teams coordinator Matt Barnes said before practice on Wednesday. “Extremely intelligent, very diligent. Never let any of his success or the fact that he was an older player, he never let that affect his work ethic. He’s extremely coachable, and not only was he our free safety, he was really the quarterback of our defense.”

So who replaces the quarterback of the defense? The Buckeyes have recruited well enough not to worry about physical talent in the secondary. Both Josh Proctor and Marcus Hooker are up to that challenge that comes with starting at safety for the Buckeyes.

It’s all about the mental side of being the quarterback and last barrier in the defense. And it could make or break the Buckeyes national title chances.

Barnes, Proctor and Hooker spoke to the media about how they can replace Fuller. A couple of the special teams players also spoke to the media, and Lettermen Row is breaking down every angle of What We Learned from the 90 minutes with the Buckeyes. 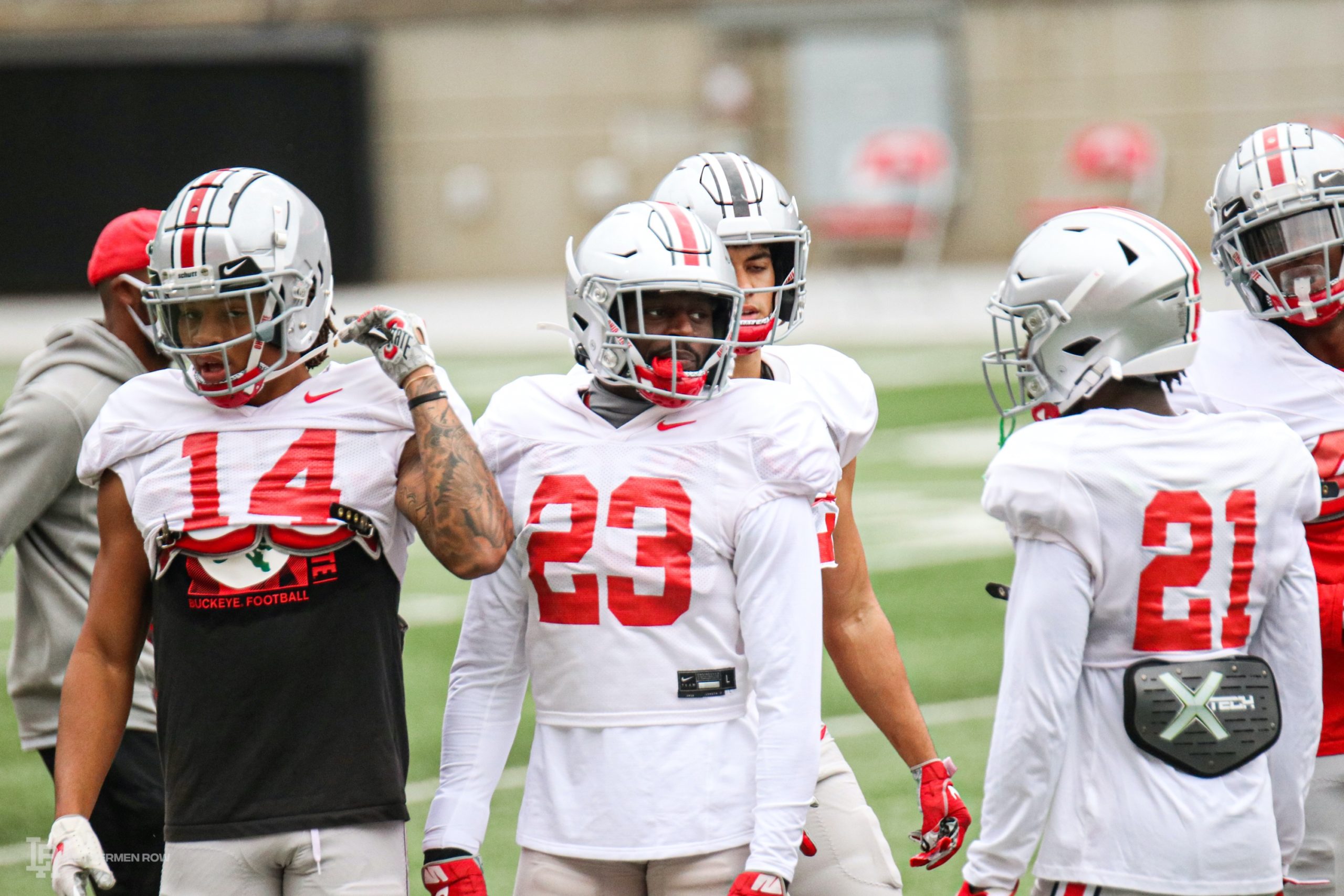 Ohio State safety Marcus Hooker is vying for a starting role for the Buckeyes. (Birm/Lettermen Row)

As the competition continues into the final week of fall camp, Josh Proctor and Marcus Hooker continue to grind for that starting safety role in the Buckeyes defense.

The two are close friends off the field, but they aren’t worried about anything other than football on it. Both players are locked in on the competition. But in doing so, they bring out the best in each other on and off the field.

“We just play ball, really,” Hooker said. “We don’t worry about the rotation or what coach has planned for us. All I know is that me and Josh Proctor are very close friends. He’s been there since we were freshmen. We were close when we first got here. I always looked up to him. We kind of shadowed each other. We were always with each other. He always brought out the best in me and I brought out the best in him.”

And their friendship won’t change, no matter who wins the job and takes the first-team snaps against the speedy Nebraska offense next Saturday.

“We don’t really take it to the field,” Proctor said. “On the field, we’re the same way. Our relationship doesn’t change. We really just focus on each other getting better and pushing each other.”

Buckeyes have punt-return options, no starter

Ohio State hasn’t had a punt returned for a touchdown since 2014, the last time it won the national title. And the punt-returning hasn’t been great, even with the superstar athletes at every position for the Buckeyes.

Could that soon change? The Buckeyes certainly hope so. There are plenty of capable punt-returning weapons on the roster, and Barnes isn’t ready to crown one as the leader or front-runner to return them this season.

“Now, who are we going to see out there on Saturdays? I’m not ready to tell you that yet. It’ll likely be not just one guy the whole season. We’ll try to get some guys some opportunities.”

If the Buckeyes can consistently return punts better than they have for the last few years, it will make them an even more dangerous team.

Ohio State hasn’t had to replace its long snapper in four years due to the consistency and reliability of Liam McCullough. Now that the Buckeyes do need a new long snapper, it was expected that Liam’s brother Roen would be in line to take over those duties.

But in somewhat of a surprise, Barnes named senior Bradley Robinson the starting long snapper on Wednesday, citing his consistency in practice.

“So far, he’s been the most consistent,” Barnes said. “I don’t put a lot of stock in snaps that they chart when they’re off doing their own thing. I chart the snaps that they do in our team punt periods when our head football coach is there and there’s a rush team. That rush team is trying to go block the punt. It’s really, to me, those periods are critical in evaluating the snappers. Right now, Brad has been more consistent.”

McCullough still has some time to prove he can be the starter, and the position battle might not be entirely over. The real test for Robinson will come when he’s on the field for a game. But for now, Robinson will start at long snapper.

“Just like any other position, they’re not set in stone,” Barnes said. “Ultimately, we’re going to make sure we’ve got the guy out there that gives us the best opportunity to win.”

Ohio State already knows Blake Haubeil isn’t afraid to make a big kick. He’s a veteran who has been with the Buckeyes for years, and he proved last year against Northwestern that he can knock in a 55-yard field goal to close a half.

The Buckeyes have confidence in Haubeil. And with another offseason of work under his belt, he’ll be ready when called upon this season.

“[Haubeil] hones his craft,” Barnes said. “He’s an older guy, has been very successful but still very coachable and works very, very hard at it. I think one of my favorite qualities about Blake is he’s such a good teammate. He watches all the specialists, the snappers, the punters and he’s always got feedback for them and things that he thinks that may help them or something that might be worth a try. Blake’s been very steady. We’re looking for more of the same. Hopefully he gets an opportunity to show what he can do in critical situations.”

Haubeil only missed two field goals last year, and he’s an 82-percent kicker for his career. But he wants to be better and more consistent entering this season.

“I think being as consistent as possible,” Haubeil said. “I’m a really big believer in: ‘You’re only as good as your routine.’ I had a really good routine going last year, so I’m going to continue that, whatever that might be during the week.”