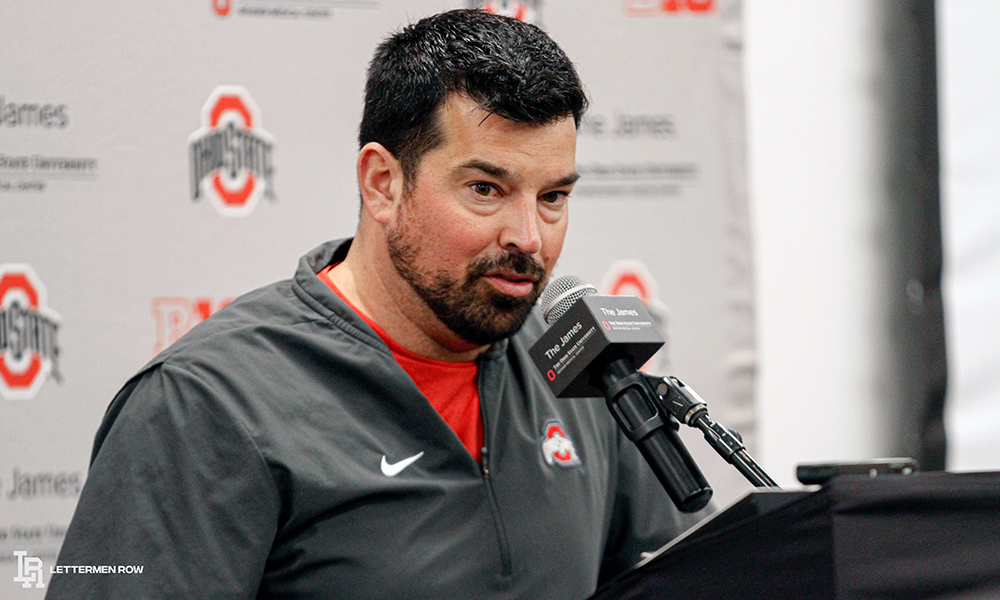 COLUMBUS — It’s only been nine weeks since Ohio State returned from a heart-breaking trip to the Fiesta Bowl.

Aside from the departing seniors and underclassmen who left early for the NFL, the Buckeyes’ short-lived winter offseason came to a close Monday when they came together for their first spring practice. Following the two-hour session, coach Ryan Day addressed the media for the first time in nearly a month to talk about the first day of his second season guiding the program.

Day has a particular way of viewing spring practice. While some of the older players are out with various injuries and issues, most of the roster was on the field. Day liked what he saw from the first day, but won’t make too much of it.

“There’s a lot of preseason and the whole summer,” Day said. “We just got done playing a couple months ago. I was thinking about it really the other day, really, we have January, February, we’re at March 1st. And here we are. Only two months ago we were playing. And [spring practice is] really for the younger guys, but a lot of the older guys have to continue to learn how to become leaders now because now some other guys left. Now they need to step up in different roles. It’s different when you’re the starter and you’re the guy counting on to make plays.

“That’s a big step for those guys, but it’s also for those guys who don’t have a lot of reps to get some under their belt. It’s really for the development, too, of the individual player — technique, fundamentals and learning your craft.”

Day touched on a bevy of topics during his media session. Lettermen Row is breaking it down and highlighting What We Learned as the Buckeyes concluded the first day of spring practice. 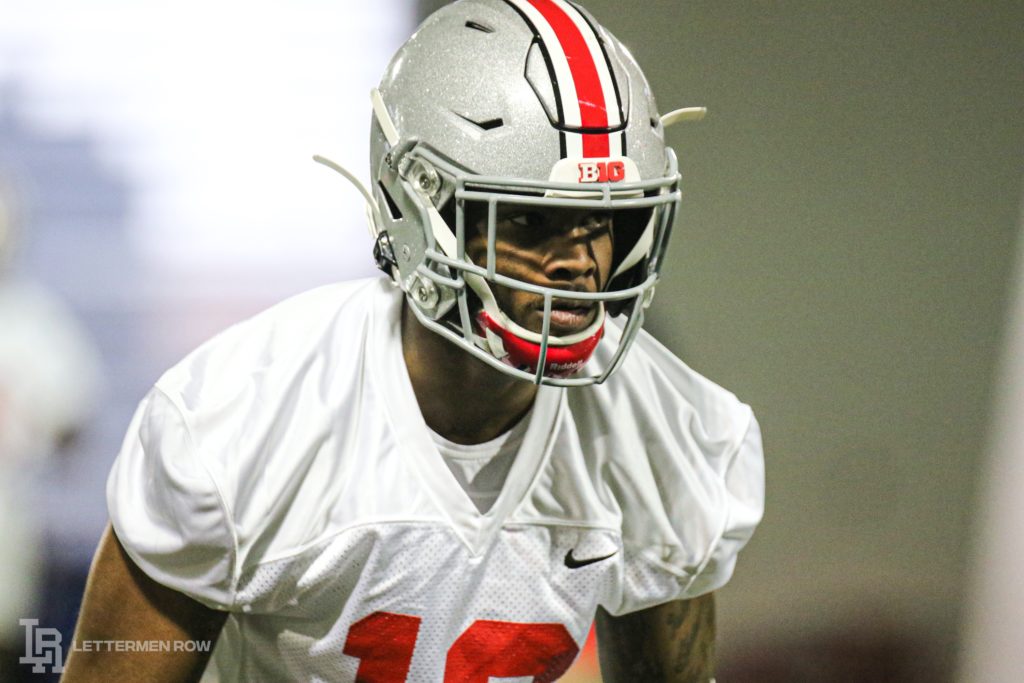 Ohio State cornerback Tyreke Johnson will get an opportunity this spring. (Birm/Lettermen Row)

After losing all but one member of the starting secondary from a season ago, a rebuild would be understandable from that unit.

Add onto that point that Shaun Wade was limited through practice, Josh Proctor is unavailable and Cameron Brown had a light workload, and the secondary seems thin to start the month of March. Luckily for the Buckeyes, it’s only March.

Defensive coordinator Kerry Coombs has plenty of time to get the secondary to a high level. One Ohio State secondary member who will be counted on this season is Sevyn Banks, who appeared throughout last season but never earned significant playing time. If Banks is able to take a step forward and look like an NFL cornerback, the Buckeyes will be better off for it.

“He’s got to step up,” Day said. “It’s only two months since we played our last game. And we’ll see once we get through the spring if he’s willing to take that next step. But certainly he’s had a good couple of weeks of winter workouts or couple months of winter workouts. And he’s a guy we are counting on to step up.”

Banks, Marcus Williamson, Tyreke Johnson and Marcus Hooker were among the cornerbacks and safeties taking reps. Each of those veterans will need to take a leap in their development under Coombs, who recruited them during his previous stint with the Buckeyes.

Then there are the younger faces, Ryan Watts, Lejond Cavazos, Kourt Williams and others. That’s a young group. If Ohio State has to go through spring with some of its veterans out for periods of time, that young core could build off the reps given and add some depth to the room.

Three of the Buckeyes offensive line spots are already accounted for. The trio of Thayer Munford, Josh Myers and Wyatt Davis are the core of a unit that can have multiple All-Americans this upcoming season. The other two spots, though, will need to be filled before the unit as a whole can begin to work toward the Joe Moore Award.

The battles for the two unclaimed spots are already heating up, and they might stretch even beyond the spring. Harry Miller is expected to take the lead in the head-to-head battle for the left guard spot; he and Matthew Jones rotated some at that guard spot. Miller seems to have caught the eye of coaches early in spring practice, and that could be a good sign for the sophomore from Buford, Georgia.

“We’re trying to find the best five guys to play,” Day said. “And Thayer, Josh and Wyatt are obviously returning. So now we’ve got to find the next — we’ve got to find four and five. However that shakes out, we’ll try to figure that out. But certainly don’t want to put guys into roles and then not have the best five guys on the field. So whatever that is, we’re going to try Harry at guard and see if he can be four. And then figure out who plays at right tackle, that’s the idea.”

That seems to indicate that the job is Miller’s to lose.

Then there’s the highly-anticipated battle for the right tackle spot between Nicholas Petit-Frere and Paris Johnson. Both former five-star tackles rotated with the first team and had their moments. The Buckeyes seem to know what they’re getting with Petit-Frere. But Johnson is the wild card because he has only been in the program for six weeks and is a true freshman attempting to earn a starting spot. Day has a simple message when it comes to that competition at right tackle.

“If [Johnson is] the best player, he’s going to play,” Day said. 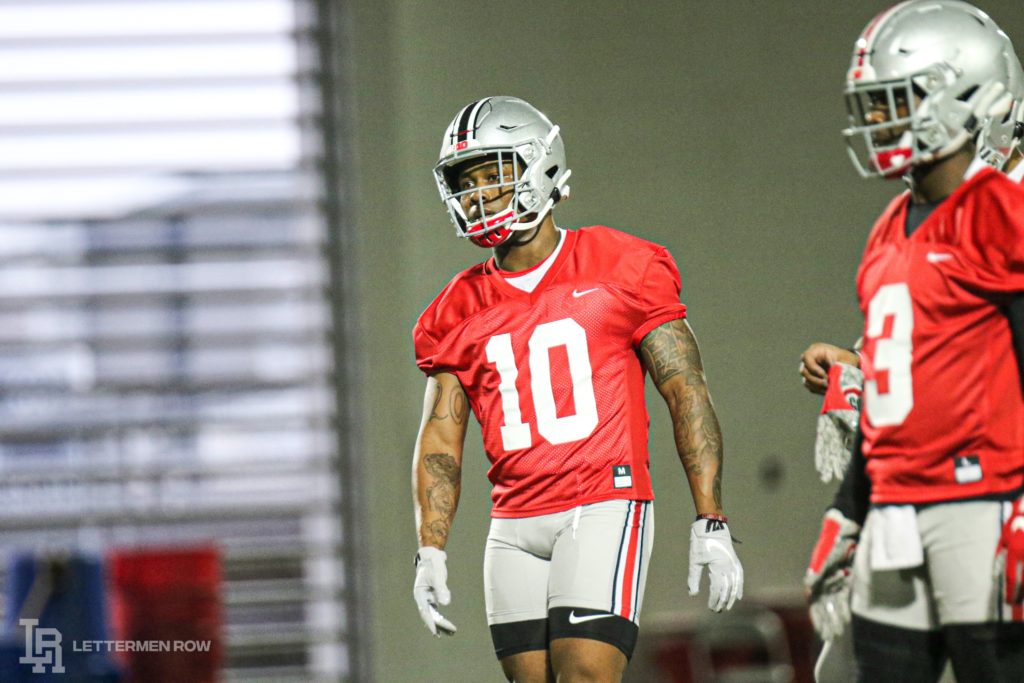 Ohio State freshman wide receiver Mookie Cooper is one of the four talented young weapons for the Buckeyes. (Birm/Lettermen Row)

The Buckeyes knew their 2020 wide receiver haul was impressive just by the talent and numbers all four of them brought from high school. But some of that is already starting to translate after one spring practice. Pads weren’t on, and nobody was being hit when going up for a ball, but these young Ohio State wide receivers are showing sings of freak-athleticism and ability early on.

“They’re talented,” Day said. “They’re talented. What strikes me, with all the seven on sevens and all the things going on throughout America, they’re further along than maybe receivers were five to 10 years ago. Certainly you can see a guy like Jaxon [Smith-Njigba] who has played in Texas, where they have those activity periods. They have so many reps under their belt, it just makes sense for them. You can see it today. You can see the talent of Julian [Fleming] and just his ability to get off of a line of scrimmage and make plays down the field and his size. Gee Scott really surprised me just how mature his releases were getting off the line of scrimmage. And then Mookie [Cooper] flashed.

“I think all four of them really have a chance to play and be successful. Now they have a long way to go, but for day one, better than expected.”

All four of them will need to have at least a small impact on the offense, especially considering the Buckeyes have lost six wide receivers to the NFL in the last two seasons. But it shouldn’t be an issue. Day has already seen some things he likes from each of them.

He’s not trying to keep it a secret: Ryan Day wants to be at Ohio State for a long time.

He reiterated that point Monday during his first press conference since he signed a contract extension that keeps him in Columbus until at least 2026. The details of the contract proved that both the university and Day are committed to each other. Day made sure to make that known when he was asked about it. But he also made sure to note that the salary wasn’t the most important part of the extension. He’s excited to have a long-term plan at Ohio State.

“That changes our life as a family,” he said. “And we don’t take that lightly. But the No. 1 thing that we’re the most excited about as a family is we get to be in Columbus again for hopefully the next seven to 10 years, hopefully 20 years. We want to be here as long as we can. We love it here. The kids love the school system. They have a set of friends. Nina loves it here and that’s what’s most exciting about this.”

When Urban Meyer stepped down and Day took over the program, he was somewhat of an unknown. Ohio State knows what it has in Day. And Ryan Day knows what he has at Ohio State. Now, the two sides will be together for the long-haul. Day seems pretty happy with that.