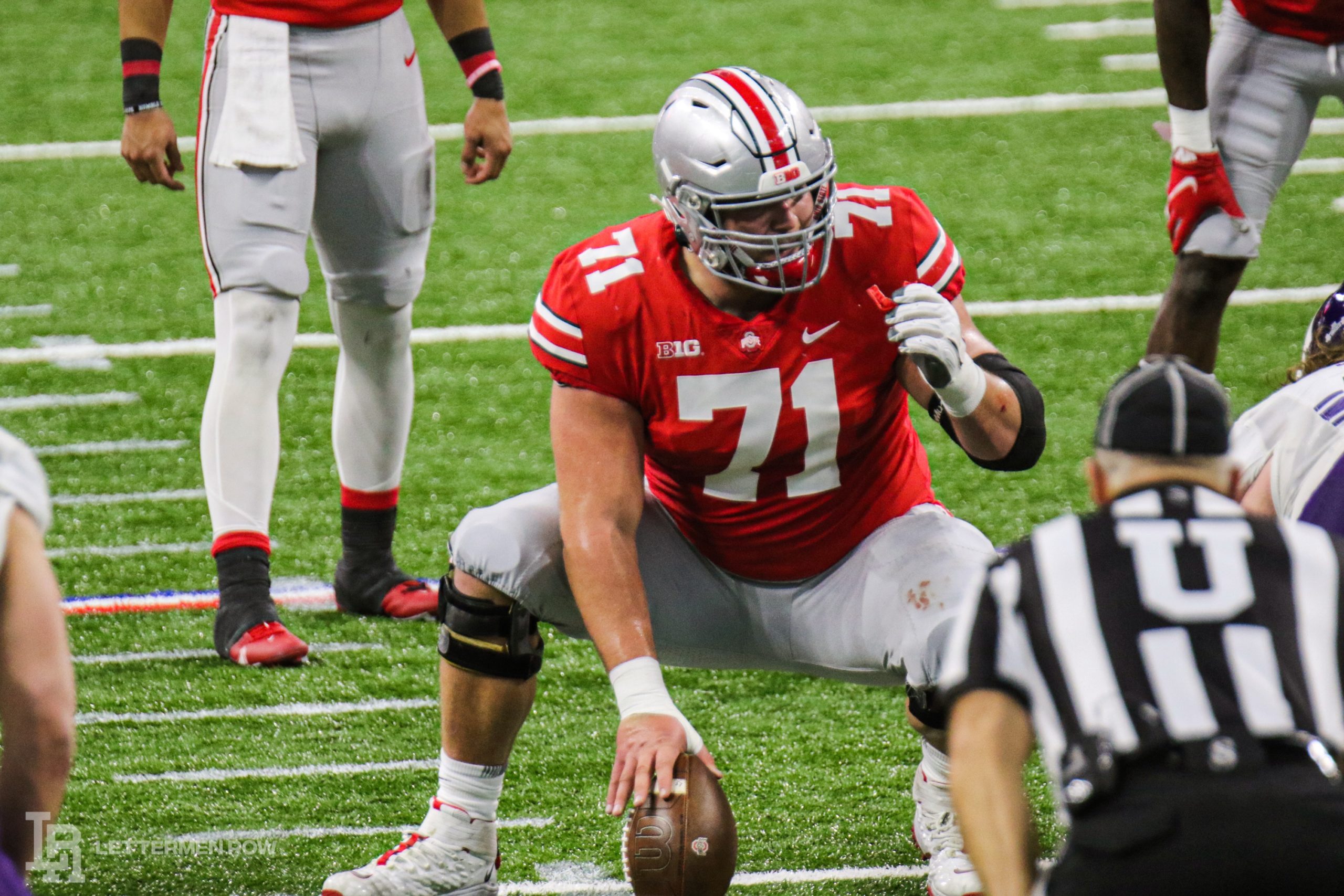 The Ohio State center had just came off the field after winning his fourth conference championship ring, holding a trophy that the Buckeyes will have to find room for in the Woody Hayes Athletic Center. But that wasn’t the biggest reason to smile.

Myers remembers what was said about the Ohio State running game early in the season when tailbacks were having trouble getting through the line of scrimmage and the offensive line was getting little push.

So when the Buckeyes ran for nearly 400 yards — 9.1 yards per carry — Trey Sermon set the program’s single-game rushing record and the offensive line made Northwestern’s defensive front look like a JV squad in a Big Ten title win over a top-10 rush defense in the country, Myers had so much to smile about.

“Early on, there was a lot of questions about our running game,” Myers said in the postgame press conference. “And I have to tell you guys, it was the best feeling. I asked [Ohio State sports information director] Jerry [Emig] to get the stat for me, [Northwestern] allowed 3.7 yards per rushing attempt and we averaged over 9 on like 40 rushing attempts or something like that.

“I can’t even express how happy I am about that.”

Myers and the Buckeyes offensive line opened huge holes for Sermon to run free to the secondary. And when he got there, Sermon ran through arm tackles and busted off big gains — six of more than 20 yards. The Ohio State offensive line, which didn’t make the cut for the Joe Moore Award for the top unit in the nation, helped Sermon break that rushing record. And they were proud to do it.

Myers and the Buckeyes offensive line were the catalyst for the success on the ground in the Big Ten title win over Northwestern, but they weren’t the only ones that made an impact as the Buckeyes won their fourth-straight conference crown. Lettermen Row is breaking down others who helped their cause in the win. 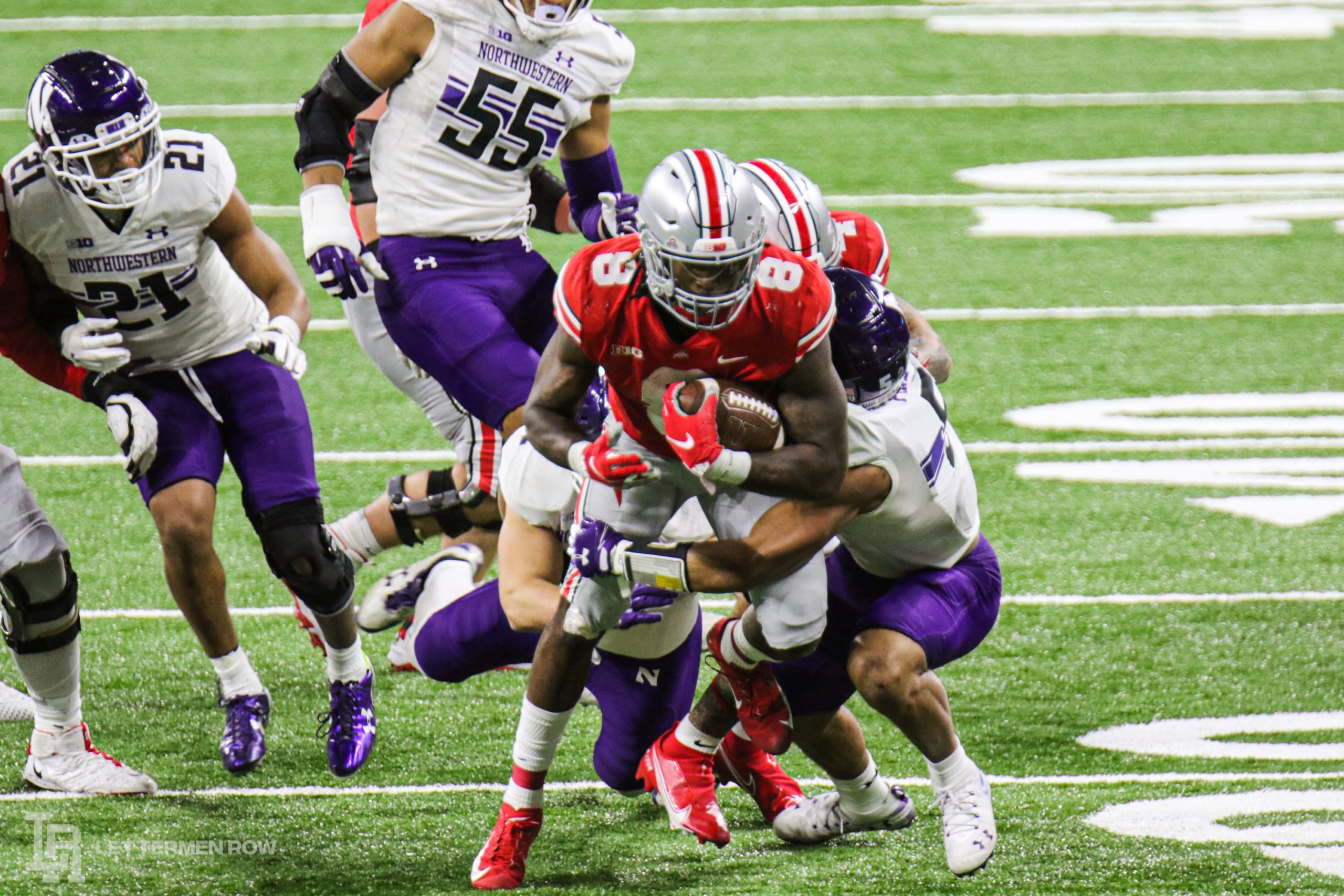 Trey Sermon put the Buckeyes offense on his back against Northwestern, providing the most prolific rushing performance in program history while the passing attack struggled. He had a school record 331 yards on the ground, and 196 of those yards came after contact. The offensive line opened massive holes for Sermon to accelerate through, yes, but Sermon looked like a different running back Saturday afternoon, one the Buckeyes will need if they are going to topple Clemson in the Sugar Bowl next week. A record-breaking performance and a Big Ten title? That’s quite the day for Trey Sermon. 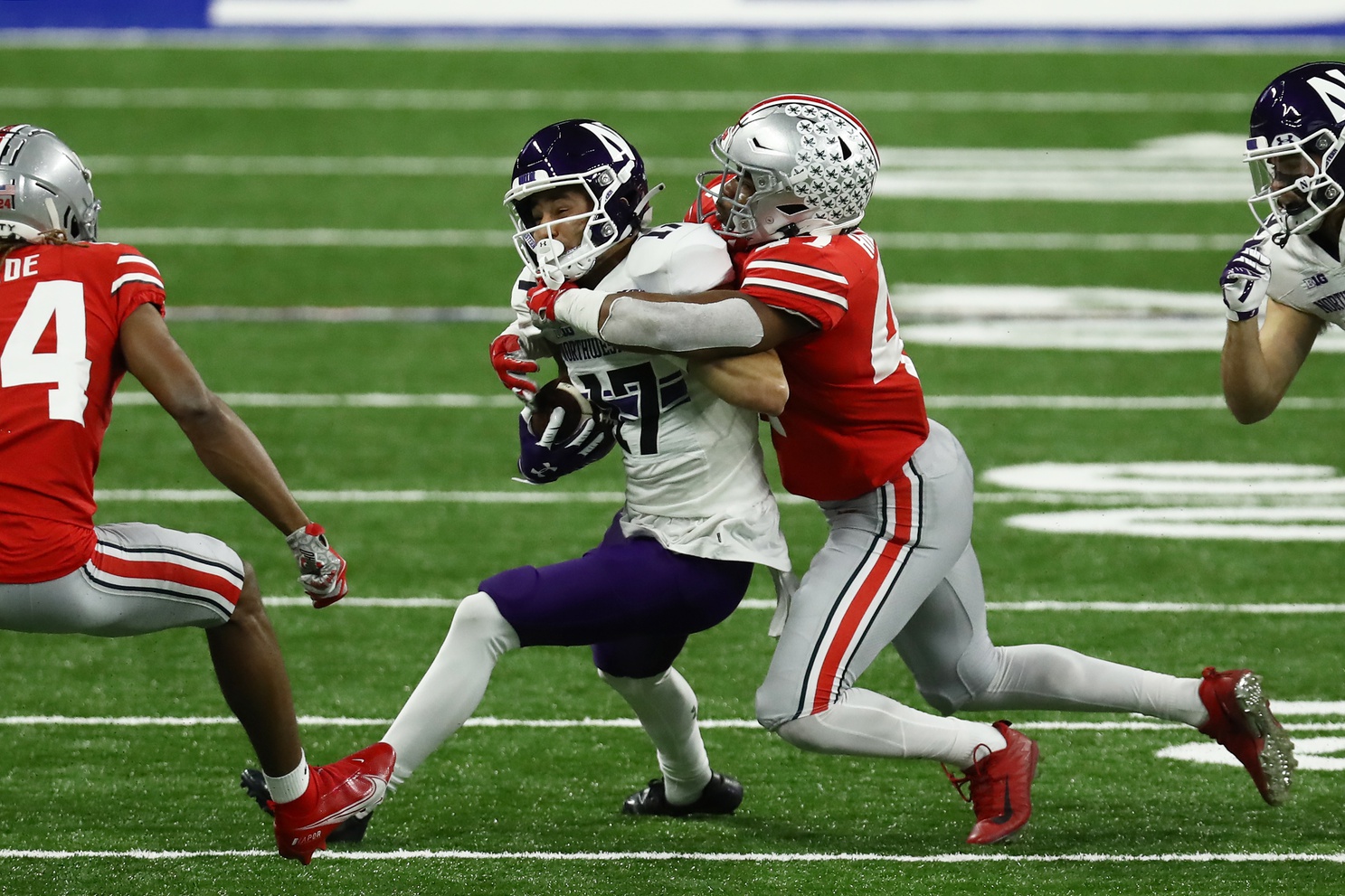 Justin Hilliard picked a massive game to have the best performance of his six-year Ohio State career. The former five-star prospect has battled through injuries and hardships during his time as a Buckeyes linebacker, but the wait to break out is finally over. Hilliard had a huge interception to keep the Wildcats out of the end zone in the third quarter. He had a pair of tackles for loss and recovered a fumble he helped force. While Baron Browning was unavailable, Hilliard stepped in and made the most of the Big Ten title game — and he might have to have a role against Clemson. 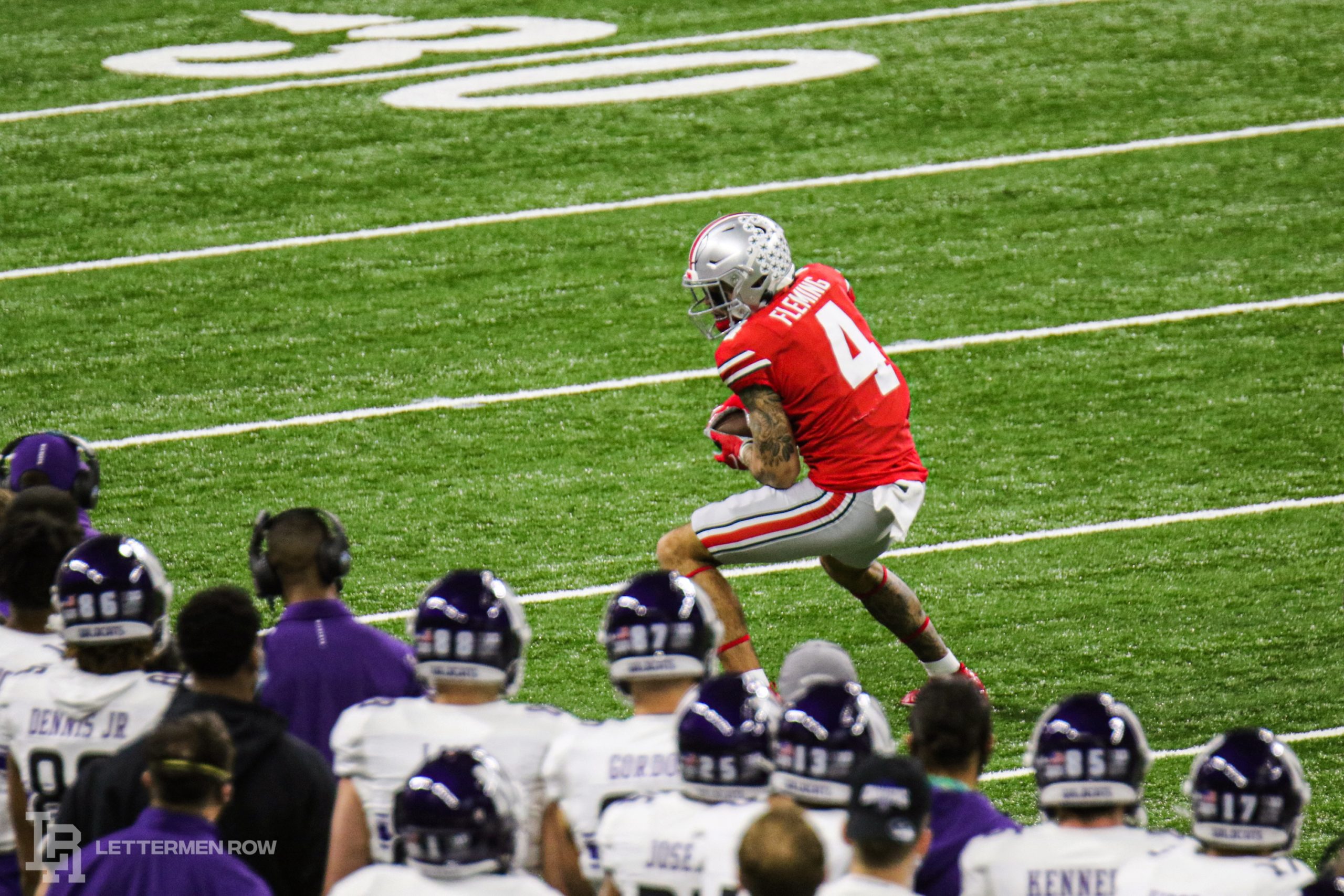 With Chris Olave and Jaxon Smith-Njigba both unavailable for the Big Ten title game, the wide receivers room lost some of its depth against Northwestern. That could have been a concern, but five-star freshman Julian Fleming stepped in and eased any worries early and often. Fleming caught four passes for 53 yards on seven targets, and after dropping the first pass thrown to him, he grew more comfortable in the outside receiver role. The Ohio State passing game didn’t look as good or normal as the Buckeyes are used to on Saturday, but Fleming provided a flash of the future — and maybe for the Sugar Bowl — when he filled in for Olave. 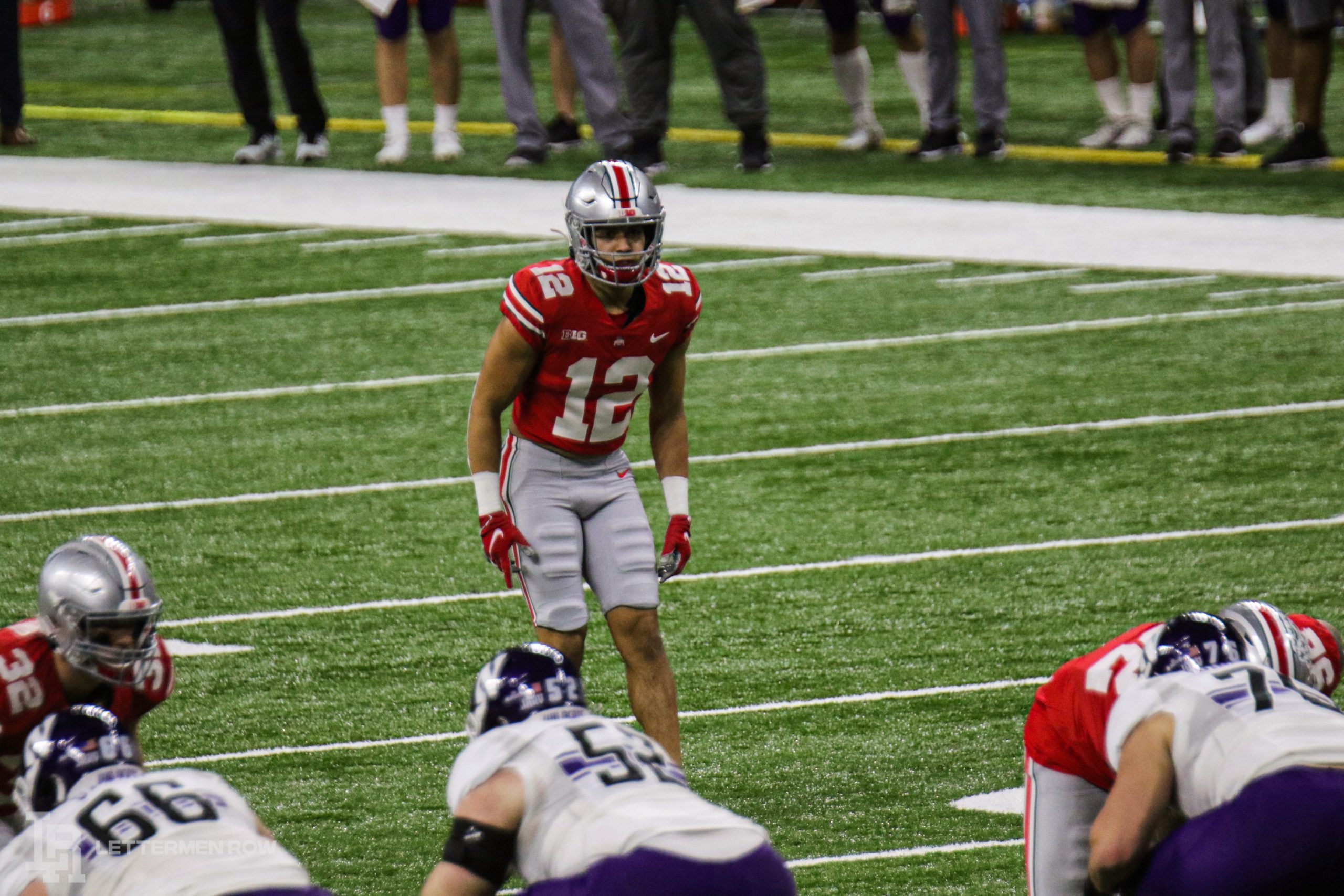 Lathan Ransom was on the field for big moments for Ohio State in the Big Ten title. (Birm/Lettermen Row)

One of the talented defensive backs in the 2020 recruiting class, Ransom didn’t enroll early at Ohio State. But with the pandemic shutting down most of the spring and summer activities, he never fell behind. And then when fall camp came, he made the most of his opportunities. Now with the defensive backfield in flux and going through depth issues, Ransom has found his way on the field. In the fourth quarter, Ransom delivered a crushing fourth-down hit to break up a pass that would have given Northwestern a first down. Instead, with the pass break-up, the game was all but over. Ransom may have to play a bigger role against Clemson if the Buckeyes don’t have their starting defensive backs on the field.

Five Questions as Buckeyes get ready for rematch with Clemson
What is testing positive, return-to-play process like for Buckeyes? ‘Awful’
Advertisement