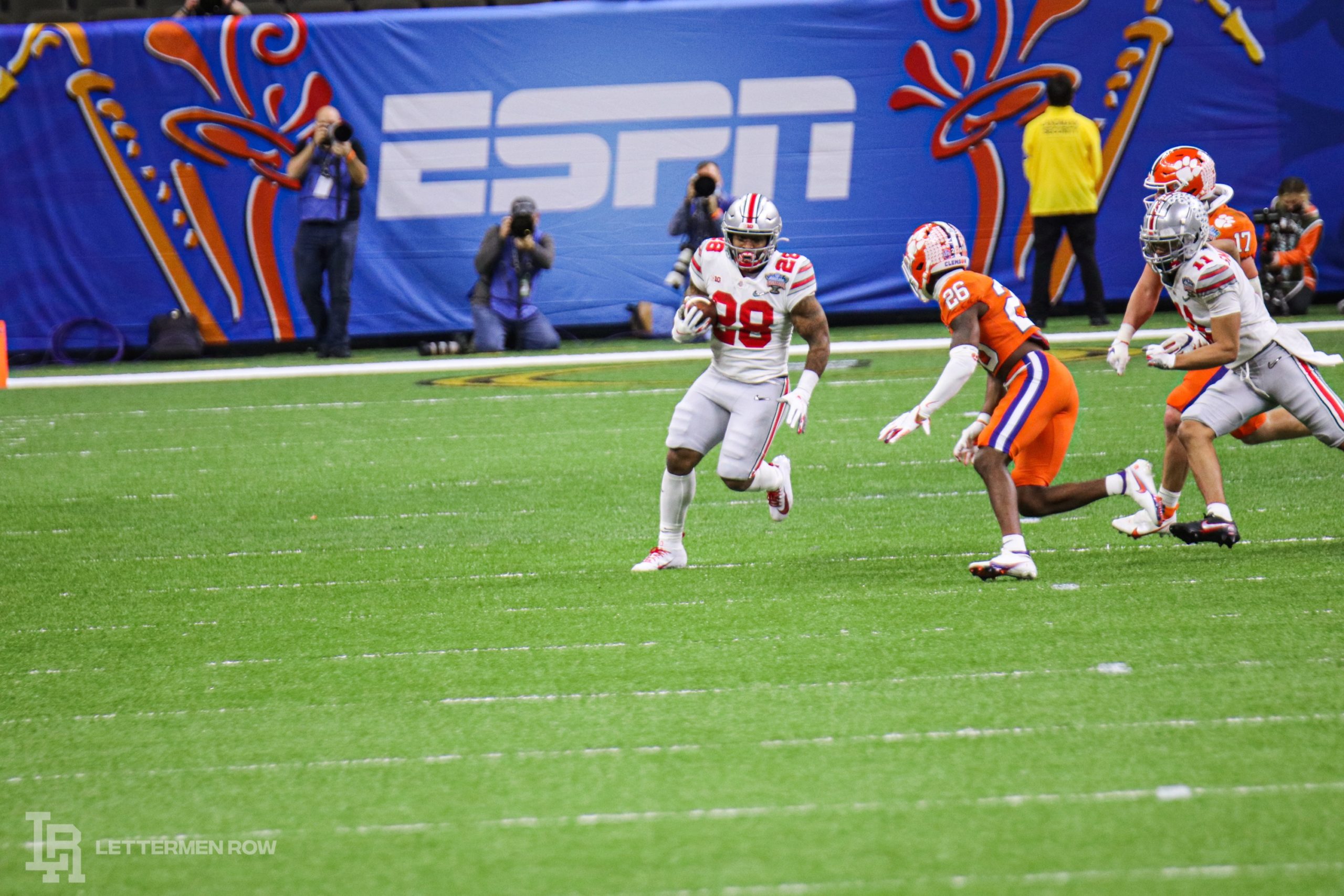 Ohio State freshman running back Miyan Williams made the most of his carries. (Birm/Lettermen Row)

COLUMBUS — Miyan Williams knows how it feels to be doubted at Ohio State.

Williams, a former Iowa State commitment, found his way into the Ohio State class because of other recruiting misses by the Buckeyes. After five-star running back Bijan Robinson chose Texas and another four-star back chose to stay in the South, Williams flipped to the Buckeyes, filling a big need in the 2020 class.

But as a three-star recruit, Williams wasn’t the first pick of the running back litter in his class among the folks who rank high school players, and he doesn’t forget that — even after his freshman year, in which he worked his way into valuable carries in the Buckeyes biggest games.

“There is a chip on my shoulder,” Williams told Lettermen Row before he enrolled at Ohio State. “That just makes me grind harder than ever. I really don’t care about the rankings, because they don’t help you get better at what you are doing. So, the rankings didn’t matter to me.”

Williams proved his own point late in his freshman season, when he had five carries for 28 yards against Michigan State. He had just one rushing attempt in the Big Ten title game but burst back into action with three impressive carries in the Sugar Bowl win over Clemson.

Williams’ momentum slowed down due to COVID-19 protocols, however, when he couldn’t travel with Ohio State to South Florida for the national title game. And when Trey Sermon went down with an injury in the first quarter, Williams could have carried the rushing load if he would’ve made the trip. 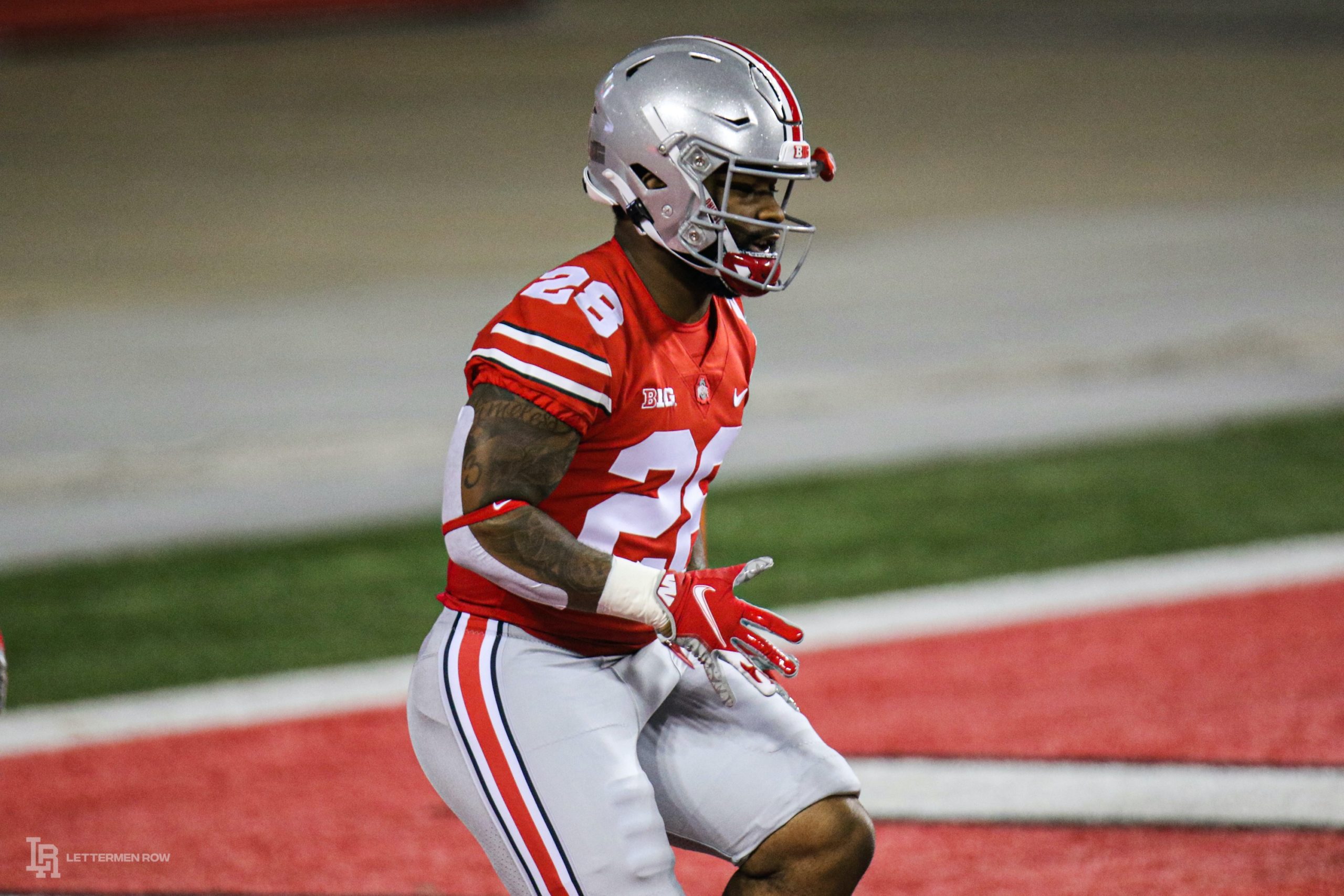 Miyan Williams has a chance to play a big role for Ohio State next season. (Birm/Lettermen Row)

Even without the reps in the championship game, Williams carried that chip on his shoulder and turned it into a promising freshman season.

Williams and running backs coach Tony Alford both believed Williams could make an impact, and that’s what happened.

“I’m not going to lie, I get tired of talking about last year,” Alford said last offseason when asked about the lack of recruiting a highly-ranked running back. “Good, bad or indifferent. I will tell you this, next year, I’ll get tired of talking about this class. But I will say this when you want to talk about last year’s class: Miyan Williams is a really good player.

Williams didn’t have a chance to enroll early. He didn’t get a head start in the weight room, film room or on the practice field. He arrived in June when the Woody Hayes Athletic Center opened after the three-month shutdown due to the pandemic and immediately went to work.

The learning curve was steep. But Williams showed he could learn an offense and carry the ball in the Big Ten early in his career.

“Miyan’s still going to have to learn [the playbook],” Alford said before the season. “So we’re doing that, and we’re continuing to do that with him. I have to get him ready to go because the one thing that a guy like him, proximity-wise, he was able to come up and watch practice and kind of see some things and get his feet wet by sight, and being in, sitting here and watching practice. The learning curve is going to be a little bit steeper, but that’s also why we coach. That’s why they call us a coach.

“We have to get him ready to go by whatever means necessary, and we’ll try to get that done.”

Whether it was Alford’s coaching or Williams drive, the freshman got better as the year progressed and made the most of his carries.

As he enters his second year in the program, Williams will be part of a loaded backfield that features two of the top-ranked running backs in the class of 2021, a two-year contributor and two other talented challengers for playing time.

But Miyan Williams is already used to being doubted at Ohio State. He earned his carries as a freshman. He’ll do it again next season.

Continue Reading
You may also like...
Related Topics:Featured, miyan williams