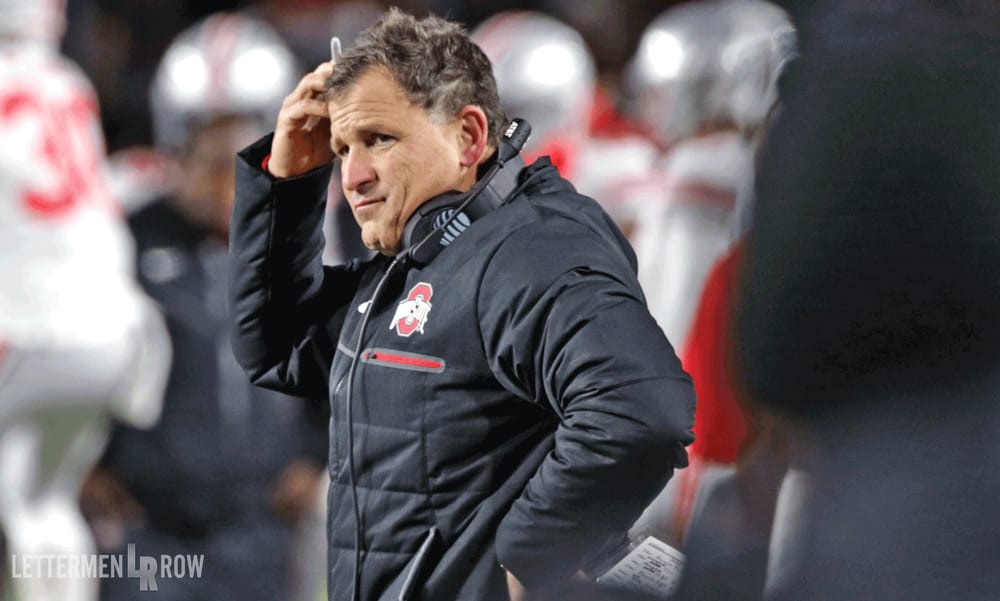 WEST LAFAYETTE, Ind. – October was supposed to be a month of breathing easy for Ohio State. It’s turned into a horror story for the Buckeyes.

After a thrilling come-from-behind win at Penn State at September’s close, the expectation for October was that Ohio State would roll through Indiana, Minnesota and Purdue. Sure, there were some things to fix after an undefeated start, but it wasn’t going to be a problem getting those small items fixed against the Big Ten’s middle-tier programs as summer turned to fall.

Instead, the only real fall has been by the Buckeyes.

The run game has disappeared, and the red-zone offense has followed suit. The pass defense has gotten worse. The penalties and self-inflicted wounds have grown from a minor nuisance into a full-blown, season-altering problem. It’s clearly not just one issue plaguing Ohio State, but one glaring issue is becoming impossible to ignore: It isn’t getting better.

And it’s time that the coaching staff is held accountable for that.

On Saturday night, after surrendering 539 yards to Purdue, there wasn’t a single Ohio State defensive coach put in front of the media. Rather, junior captain Jordan Fuller sat and tried to answer a flurry of questions about what went wrong in the 49-20 loss and what’s been going wrong with the defense in the last six weeks.

The Ohio State offense, which failed once more to run the ball with any efficiency or proficiency, was represented by Dwayne Haskins and Terry McLaurin, who did their best to explain how the vaunted offense failed to score a touchdown on any of its five red-zone appearances against the Boilermakers. It wasn’t Greg Studrawa, Kevin Wilson, Tony Alford or Ryan Day being tasked with answering those questions. Instead, it’s the young adults doing what they’re told and taught in the spotlight.

Heck, maybe it wouldn’t matter if the coaches were asked again to answer those questions. The quotes haven’t changed throughout the last five weeks. Neither have the results.

Something isn’t right. Maybe Ohio State, despite one of the country’s most talented rosters, just isn’t that good? Maybe the offseason, one that would’ve crippled most programs, is finally catching up with the Buckeyes psyche? Maybe it’s becoming increasingly difficult for Ohio State to manage the seemingly endless stream of injuries they’re dealing with at this point in the season.

Or maybe the assistant coaches in Columbus are too comfortable. In his distinguished head coaching career, Urban Meyer has fired one assistant coach, and most would agree that getting rid of wide receivers coach Zach Smith in July wasn’t going to happen if it didn’t have to. Throughout his career, Meyer earned a reputation as a boss that didn’t want “Yes men” and seemed to prefer coaches that were on their way up in the coaching profession, eager young coaches working to build their own brands. Examine the current Buckeyes coaching staff, and it’s easy to question if that’s still the case.

If the guys on his staff aren’t getting the job done, whether it be in recruiting, development, motivation or anything else, its fair to ask whether Meyer is willing to do what needs to be done in order to maintain the program he’s built. There are legitimate questions to be asked, and only Meyer is able to answer them.

He doesn’t need to answer them publicly, but right now there unbelievably seems to be little edge, little urgency and little discomfort among the Ohio State leadership. Meyer has made his mark, growing his brand on the idea that comfort is a program killer, yet here the Buckeyes are on the heels of a blowout loss to Purdue, a year after a shockingly similar outcome at Iowa.

It’s time for Meyer and his assistants to be asked and to be made to answer the tough questions. How does Ohio State’s legendary coach change the approach from here?

“I do love our coaching staff,” Meyer said Saturday. “We’re going to have a lot of work to get done this week.

“I don’t know if it [needs to be] blown up. We’re 7-1 and we’ve got a chance to be 8-1, that’s the only focus. But there are some serious shortcomings right now we’ve got to get fixed.”

Those fixes start with honest assessment and conversation with the men Meyer has put in charge of his program.