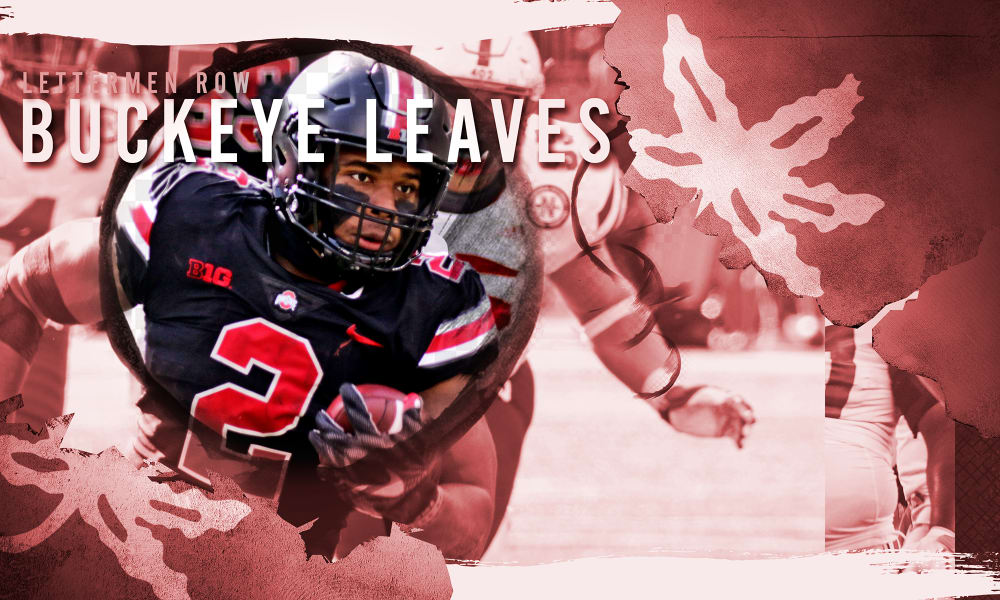 J.K. Dobbins turned in his best performance of the season to lead Ohio State over Nebraska. (Birm/Lettermen Row)

COLUMBUS — There was no denying there was a problem at Ohio State, but J.K. Dobbins couldn’t identify exactly what was causing it.

All the sophomore running back knows is that it appears to be fixed now.

Drawing any sweeping conclusions after just one game can be dangerous, especially when it’s against a defense as suspect as the one Nebraska brought to the Horseshoe on Saturday. But Ohio State had been struggling to run the football against several other teams that weren’t exactly known as run-stuffers, so if nothing else, a 36-31 win fueled by the ground game counts as a step in the right direction in that department.

“It was great to get back to our old ways,” Dobbins said. “We knew what we could do. I don’t know what was happening, but [Saturday] showed that we’ve still got it. We have the momentum right now, and we’re going to take it into next week, because that’s a big game [at Michigan State].

“We’re back on track now, I believe.”

The Buckeyes will have to validate that to keep on winning and stay in position to win the Big Ten. But Dobbins had it rolling against the Huskers, helping him lead the way for Lettermen Row’s honorees for Buckeye Leaves. 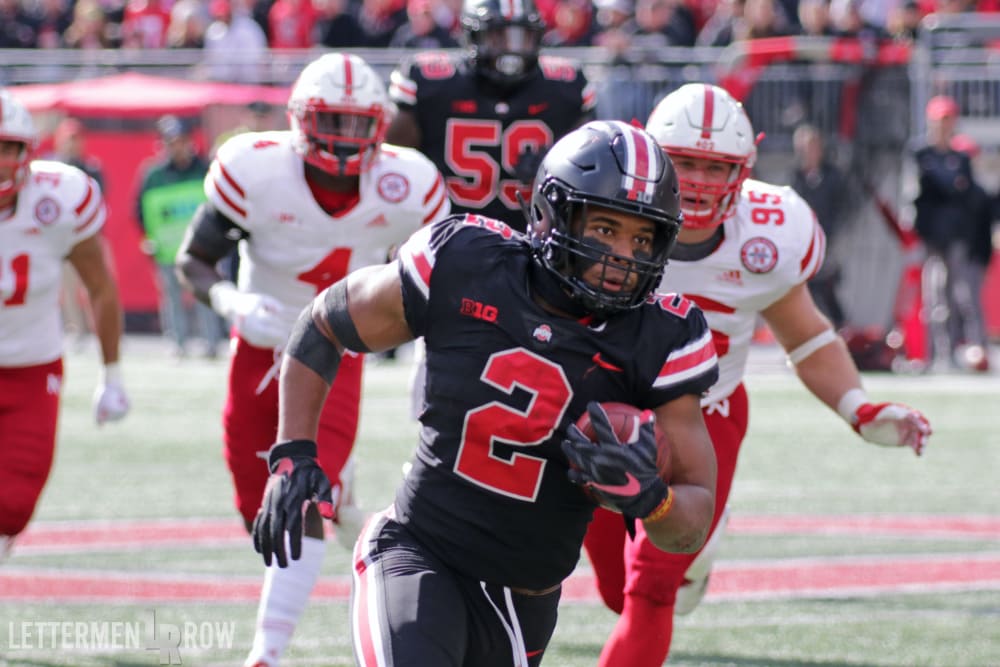 J.K. Dobbins racked up 163 yards on the ground for Ohio State on Saturday. (Birm/Lettermen Row)

Dobbins had gone five straight games without breaking the 100-yard barrier, and the last two outings came up well short even when combined after failing to top 35 yards against Minnesota and Purdue. The dynamic sophomore topped that on his longest carry of the afternoon against Nebraska, dashing 42 yards for his third touchdown of the game to effectively seal the victory. Dobbins finished with 163 yards on the ground and added a 22-yard reception in what easily qualifies as his most productive performance of the season. 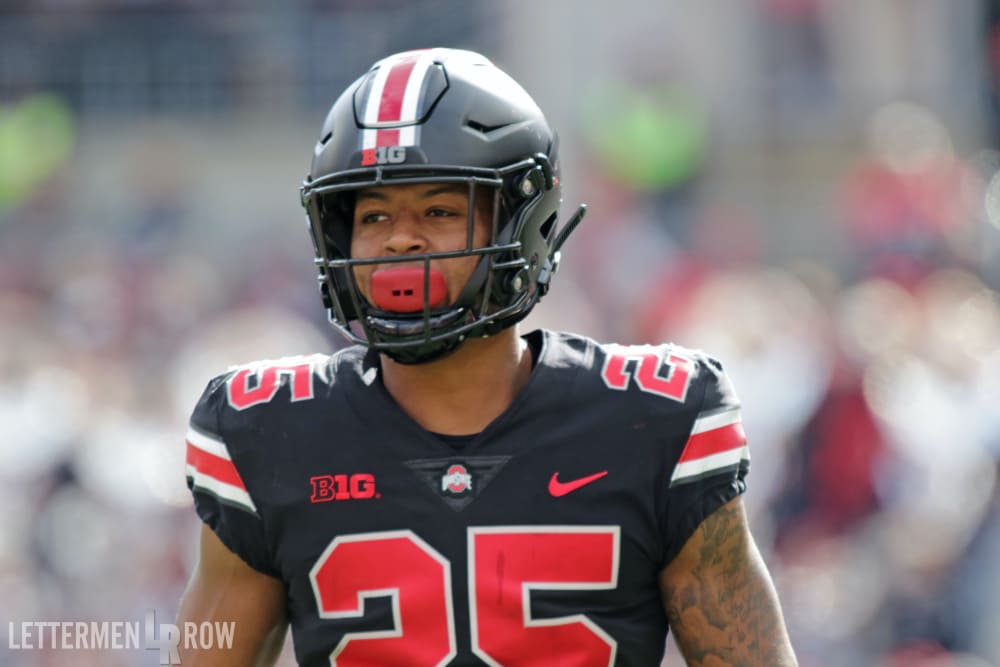 Ohio State safety Brendon White emerged as a playmaker in the secondary against Nebraska. (Birm/Lettermen Row)

The Buckeyes were always planning on giving Brendon White a shot against Nebraska, and he came out early in the nickel package as the secondary scrambled with Isaiah Pryor out due to a shoulder injury. But that role was ramped up dramatically when Jordan Fuller was ejected for targeting, and White clearly was ready for his number to be called. The sophomore was a revelation for the Buckeyes, piling up a team-high 13 tackles and making a pair of plays in the Nebraska backfield to spark a unit that showed some signs of improvement. White made a case that he should be out there much more often, even when Ohio State is at full strength. 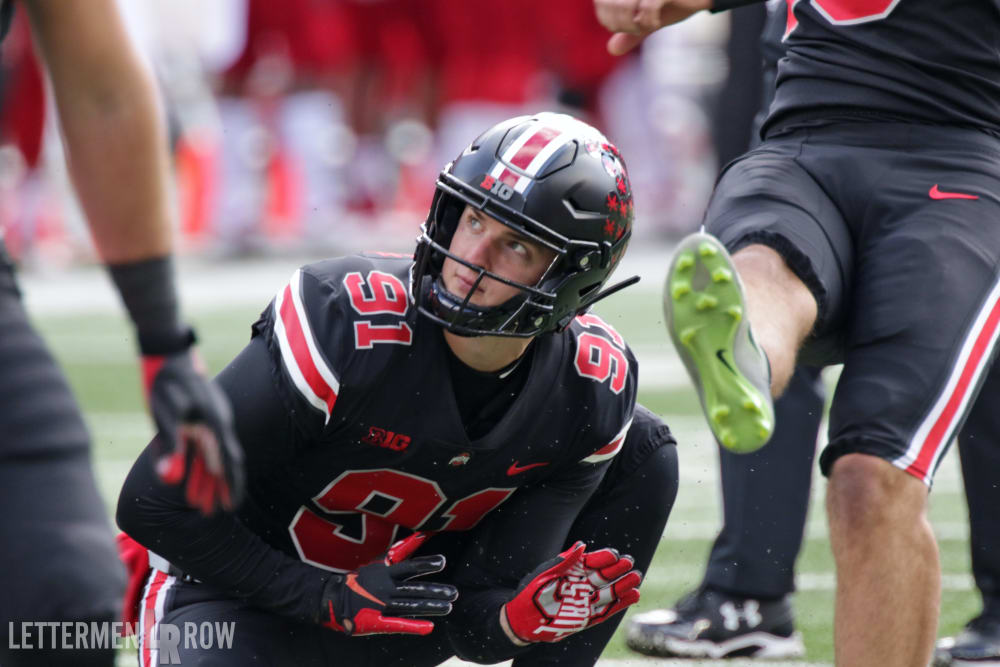 Even when Drue Chrisman doesn’t hit the football perfectly, he still has a knack for turning it into a field-flipping punt. The power of his leg and ability to hit the right spots inside the 20-yard line were once again on display when the Buckeyes had to punt against Nebraska, proving he’s a legitimate weapon in the kicking game — albeit one that they’d rather not actually have to use. But Chrisman continued his solid season with four punts for an average of nearly 48 yards, including a pair that pinned Nebraska deep in its own end of the field.