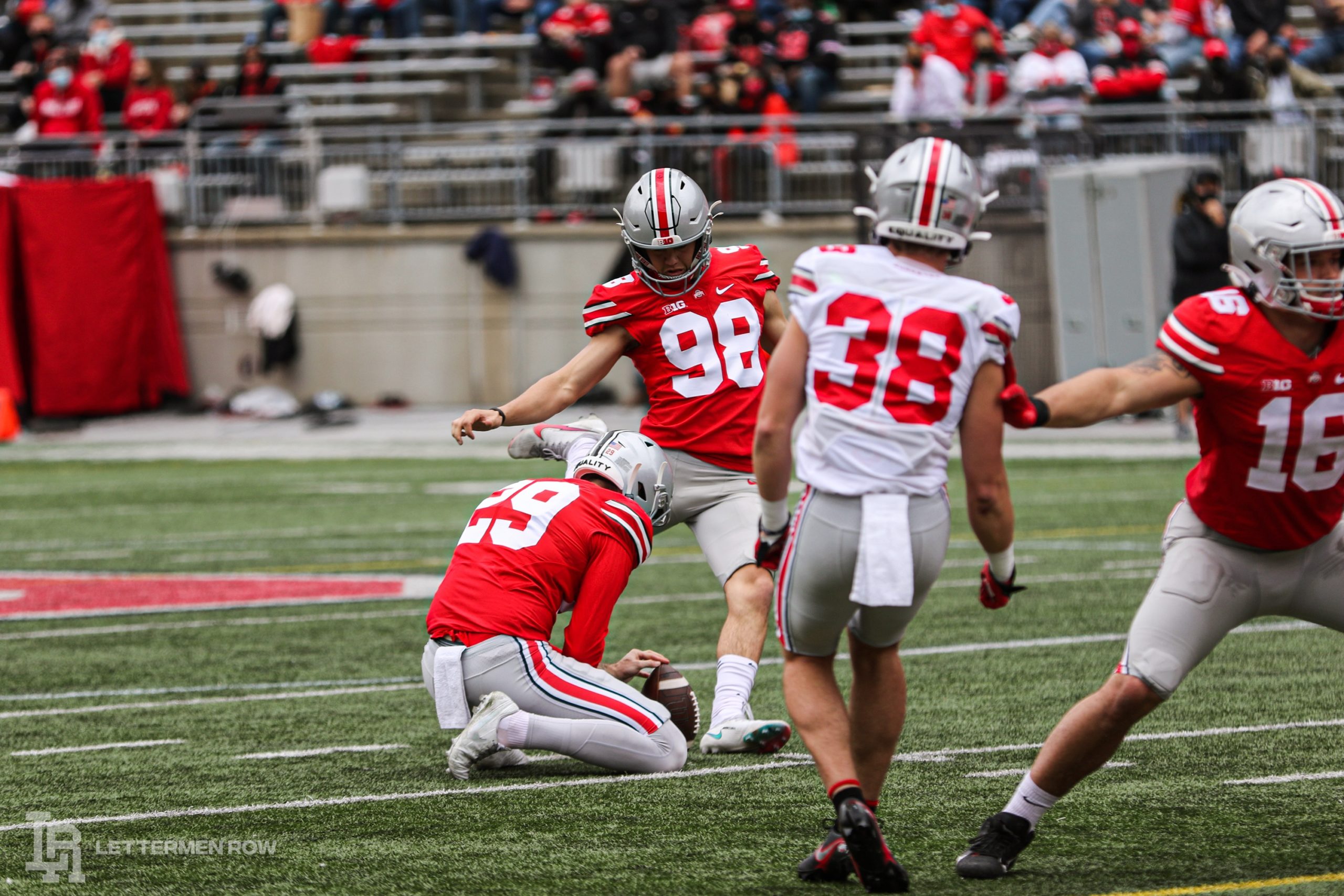 COLUMBUS — Jake Seibert lined up for a 40-yard field goal early in the Spring Game.

The kick had the distance, but sailed wide-right for a missed opportunity at points. Just two drives later, freshman punter Jesse Mirco had a punt go awry, netting just 24 yards and going out of bounds.

Of course, it was just a camp-closing scrimmage, so the damage was minimal on Saturday at the Horseshoe. But it gave Ohio State an unsettling glimpse at the state of the special teams, especially in a setting that wasn’t live.

Ohio State will have one of the best offenses in the country this fall. The Buckeyes should also have an improved defense when September arrives. Both sides of the ball are expected to be the best in the Big Ten. But special teams? Special teams may present a concern for Ryan Day and the Buckeyes after a lackluster spring game from the projected starters at kicker and punter.

Maybe it was just a couple of bad moments. Indications out of the Woody Hayes Athletic Center have pointed to a promising spring for both of the new projected starters. But the small sample size Saturday seemed to be reason for concern.

“[Mirco]’s development and Jake’s development have been really good,” Ohio State special teams coach Parker Fleming said last week. “Had a great winter to get stronger and work through tough things. There’s a lot of things that specialists need, physically, mentally, all that, getting with the team and going through drills. … That’s been really good.

“I think their development this spring has been key. They’re going to have to continue to develop through the summer and into fall camp to really maximize where they are.”

Mirco, a ProKick Australia product, and the second-year kicker Seibert each had their bright moments Saturday. Mirco had a punt over 40 yards. Seibert was perfect on extra points. But the concern came on every other play. Mirco averaged just 33.8 yards on his five punt attempts. Seibert missed two field goals — one from 40 yards and another from 45. 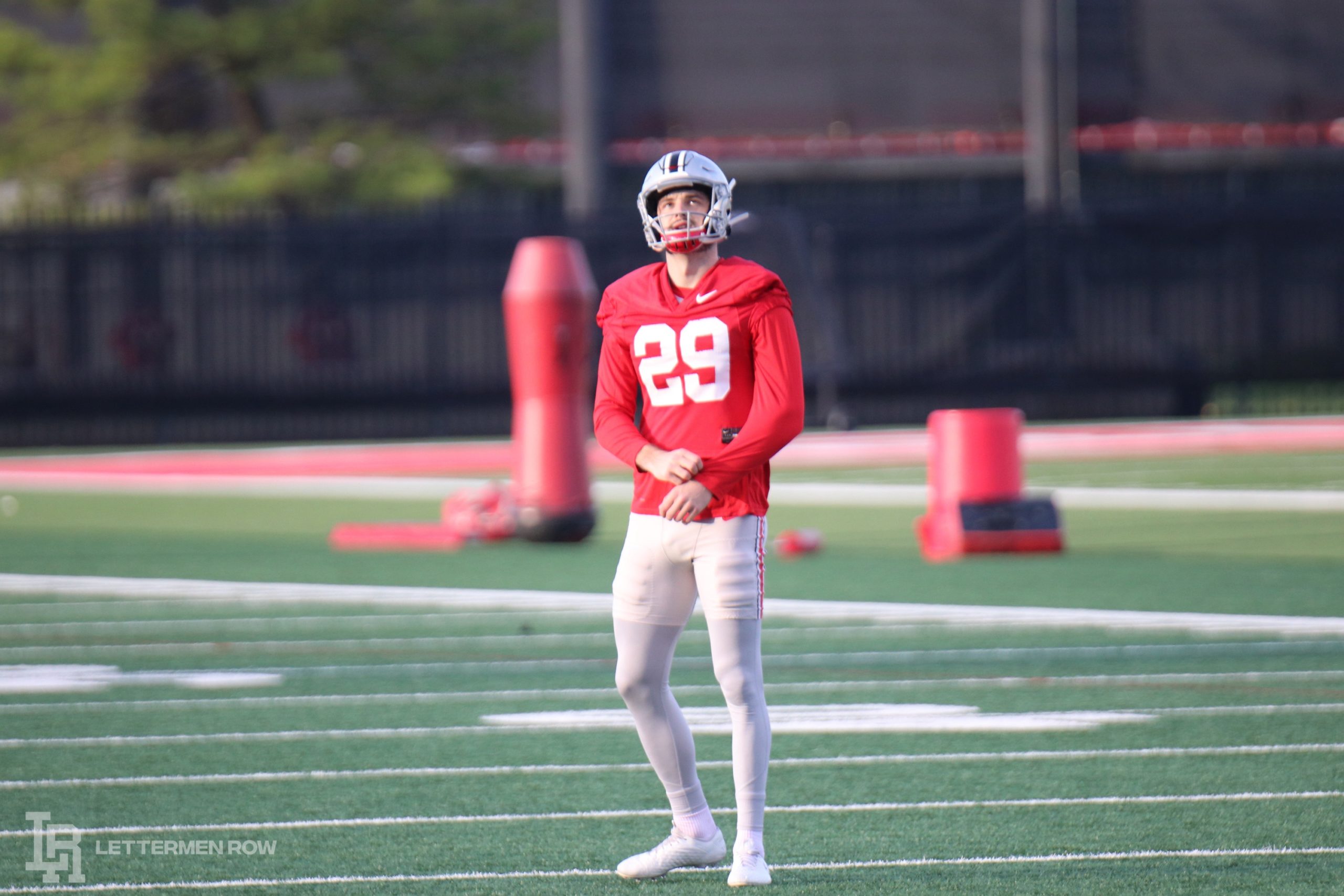 Neither have been named a starter by the Buckeyes. But they are the only scholarship players at their positions, making it pretty clear Ohio State is expecting them to handle those jobs. And if Saturday was a preview, the Buckeyes could be searching for answers at two positions that normally offer a sense of reliability when called upon.

The Spring Game was Mirco’s first time in the Horseshoe, plus his unofficial debut in an American football game. Maybe he deserves a pass for his performance, which included two punts that travelled less than 30 yards. But Seibert is no rookie. The former No. 1 kicker in his recruiting class, Seibert kicked in place of Blake Haubeil in three games last season. He missed a 44-yard field goal against Indiana and made a chip-shot field goal in the national title loss to Alabama. Those mixed results came with a perfect 16-for-16 on extra-point attempts last year.

Even with his experience, Seibert hasn’t been named the starting kicker yet. The inconsistency shown last year and in the Spring Game give reasons why.

“It’s a competition, it always is — and we’ll always play the best player at every position,” Fleming said. “Jake kicked last year. I don’t know if we expected him to, but there’s a lot of situations where he went in and performed really well. He kicked in the national championship game, so he’s not a new player.”

Seibert is not new. Mirco is. Maybe they each just had off days in the Horseshoe on Saturday. But on a day in which the offense provided a glimpse of dominance and the defense showcased young play-makers at every position, the special teams left plenty to be desired.

“So far, it’s been really good,” Fleming said before the game.

Saturday was far from good, though. Now the Buckeyes have a few months to assure their special teams are on par with the other two units.