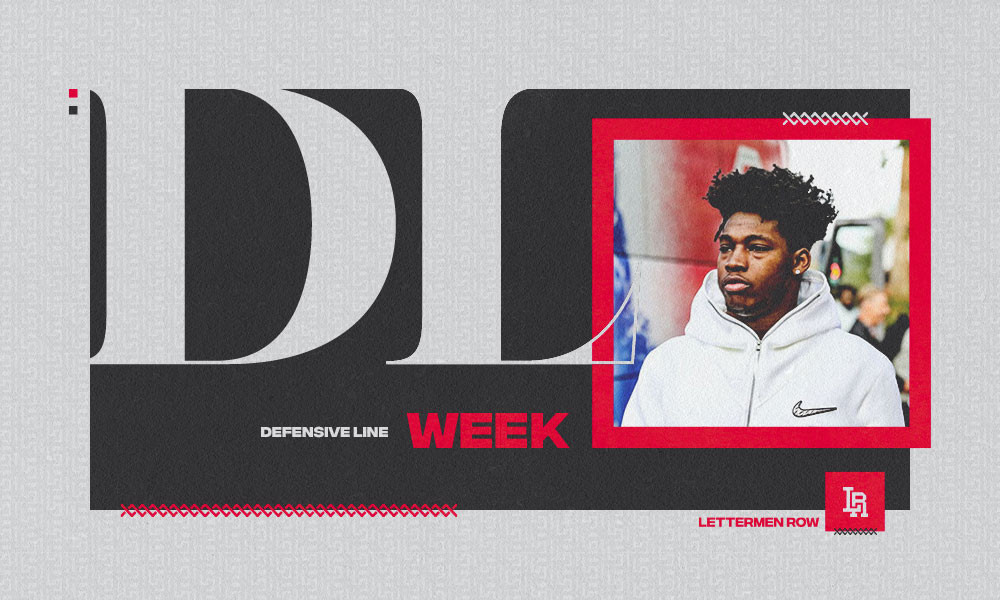 Ohio State will be loaded up front once again. (Sammy Silverman/Lettermen Row)

COLUMBUS — One of the best defensive linemen in school history is gone for Ohio State, but that doesn’t change expectations along the line at all.

The Buckeyes are pegged to be one of the best units not only in the Big Ten, but also the entire country again this season despite the loss of Chase Young, DaVon Hamilton, Jashon Cornell and Robert Landers. Those four helped the Buckeyes become what they were last year in the trenches, setting the bar high for this year’s line to shoot for. It won’t be easy, but the task is being met head-on.

“You have to keep growing,” Ohio State defensive line coach Larry Johnson said in the spring. “You have to keep moving forward. I’m looking forward to seeing what happens. … It’s not about just one guy. You know how I feel about that: It has to be two or three guys having great seasons. That’s always been the case here.”

As part of Defensive Line Week at Lettermen Row, we’re breaking down who is a lock for playing time, who may find time on the field and who can expect to watch from the sidelines.

DE Jonathon Cooper – Cooper was supposed to break out last season on the opposite side of Chase Young, but a high ankle sprain in fall camp kept him out for nearly the entire season. He was never able to fully heal up, only played in four games and took a redshirt. Now back for a fifth season, Cooper will be a captain of the defense and one of the best leaders on the roster. He has plenty of experience in big moments, and he will certainly be huge for the Ohio State pass-rush this year. 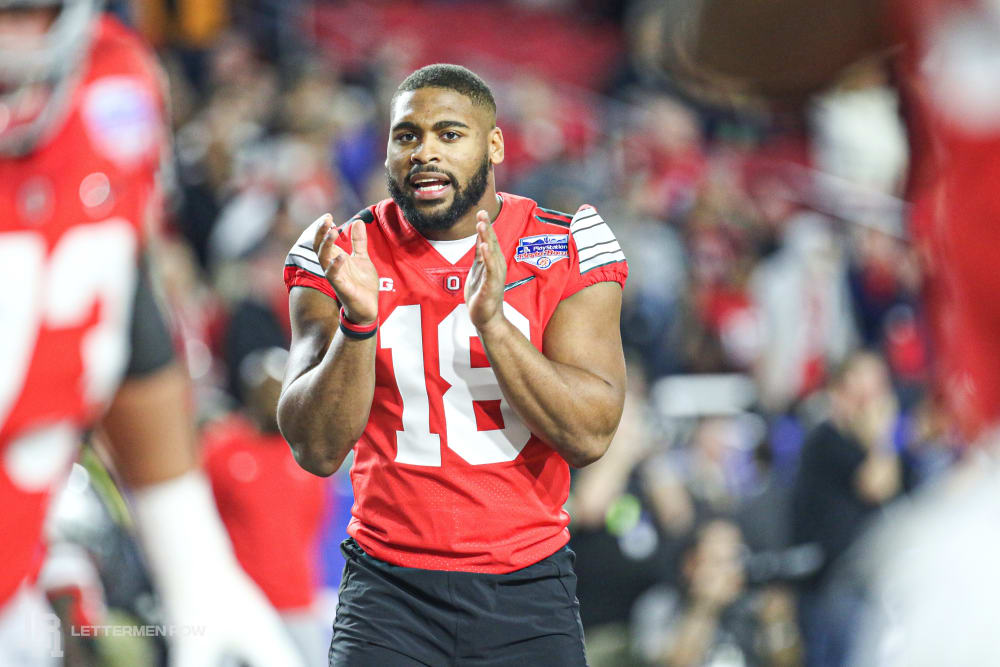 DT Tommy Togiai – Much has been made about Togiai’s strength, which always seems to come up when talking about him. But the third-year nose tackle has the agility to clog the middle of the line and be a dominant force in the Big Ten — and he might even have All-American potential. If Togiai takes the next step in his progress, Ohio State will be more complete up front.

DT Taron Vincent – A jewel from the class of 2018, the former five-star prospect Vincent spent last year on the sideline with an injury. Now in his third season, Vincent appears healthy and ready to become a force at three-technique, a position Larry Johnson loves. Vincent has a huge task of filling the spot in the interior well. Can he live up to the five-star status from his recruiting days? 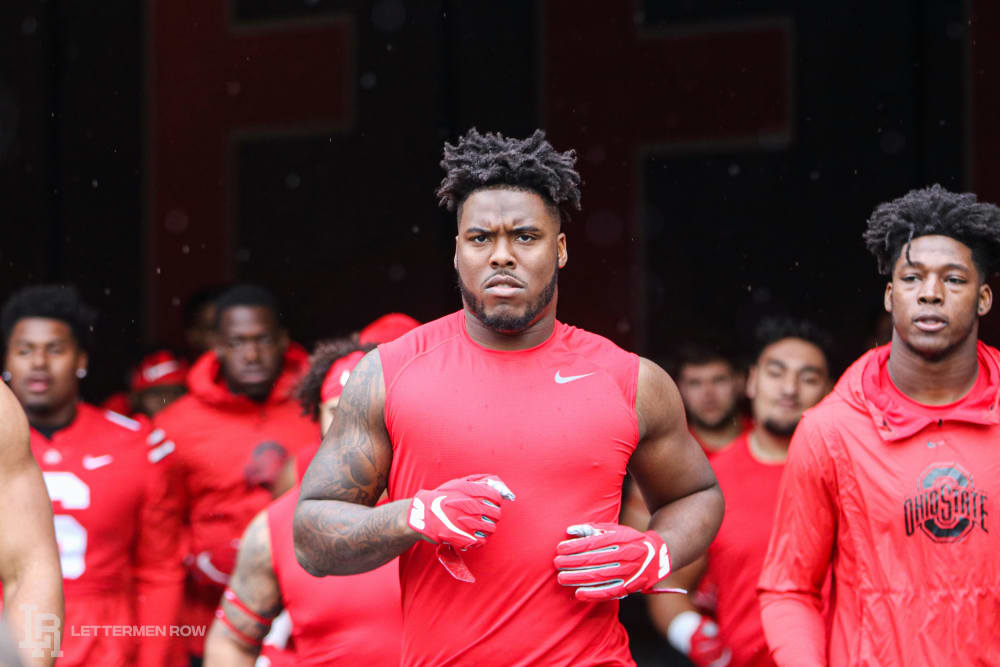 Tyreke Smith could be a first-round pick with a big season. (Birm/Lettermen Row)

DE Tyreke Smith – If Tyreke Smith can stay healthy and avoid bad injury luck, he will be a weapon for the Buckeyes on the edge. A gifted pass-rusher, Smith showed glimpses of his potential last season, but he was constantly held back by small injuries. If those days are behind him, Smith will be a monster for the Buckeyes — and the pass rush will see little to no drop-off from a season ago.

Next up for Buckeyes

DE Zach Harrison – Harrison is likely not to be officially a starter, but that doesn’t mean he won’t have a huge impact for the Buckeyes during his sophomore campaign. He might be the best pass rusher on the team, but that doesn’t always mean he’ll get the nod to start. Nick Bosa didn’t start as a sophomore because Sam Hubbard, Jalyn Holmes and Tyquan Lewis were all in front of him. Harrison could run into that problem like Bosa had. It doesn’t truly matter if Harrison is tagged as a starter. He can be dominant regardless.

DT Antwuan Jackson – Ohio State certainly liked Antwuan Jackson — so much that they recruited him twice. The former Auburn and junior college tackle is now in his final season for the Buckeyes, and he might finally have a moment to find a role in the defense. It won’t be easy, especially with the talent around him. He’ll have to have a high motor and show coaches he can make plays.

DT Haskell Garrett – A former top-70 prospect, Garrett has one more season to be productive for the Buckeyes. With a wide open depth chart, Garrett could find a spot in the starting lineup with a good fall camp, but it won’t be easy going against Togiai and Vincent for those spots on the interior. He will have to play a role if Ohio State is going to have depth at defensive tackle. 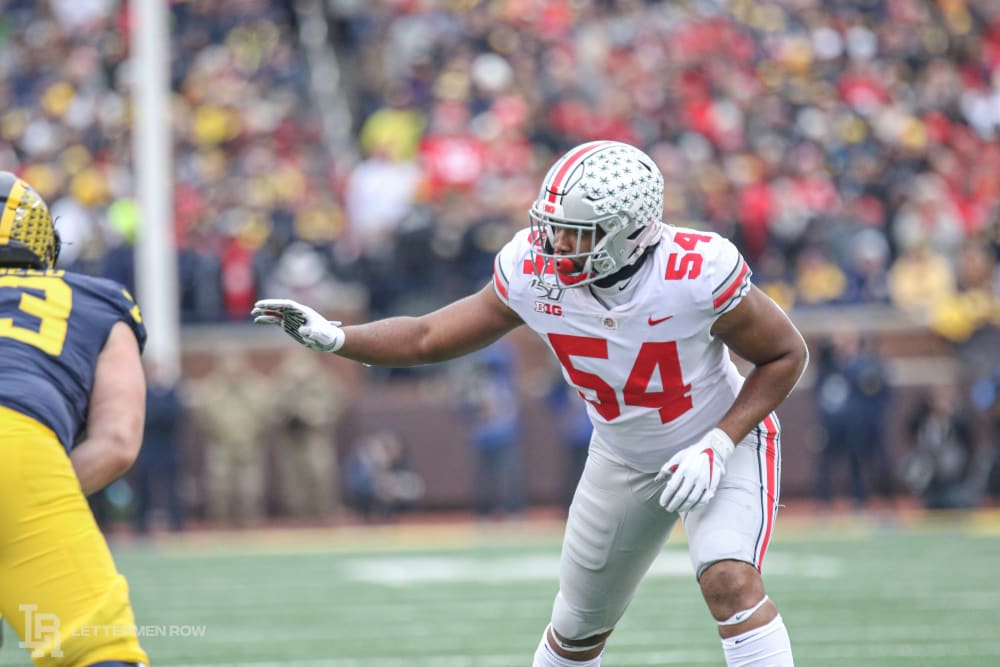 Tyler Friday will be a key piece for the depth of the Ohio State defensive line. (Birm/Lettermen Row)

DE Tyler Friday – Friday could end up playing the three-technique when the Buckeyes switch to their Rushmen package, but he’ll also provide depth at defensive end. A bigger-bodied defensive end, Friday provides a change of pace from Tyreke Smith and Zach Harrison. He began to become a key role player last season. He’ll certainly have a place within the defense — just like he did a year ago.

DE Javontae Jean-Baptiste – Like Friday, Jean-Baptiste played a role in the dominant defensive effort a year ago; he appeared in all 14 games along the defensive line. His role could expand this year. Year Three under Larry Johnson is a pivotal season for any player. Jean-Baptiste is no different. He’ll be a good weapon for the Buckeyes to show off their depth once again at defensive end.

DT Jaden McKenzie – McKenzie redshirted last season, and he only appeared in two games for the Buckeyes, finding action against Maryland and Miami (Ohio). He is a hard-working player with excellent potential, but he might be facing an uphill climb to find the field in Year Two.

DT Jerron Cage – After redshirting in 2017 and finding little time on the field in 2018, Cage played in nine games a season ago and will fight for more playing time as the conference-only schedule takes place. He still has time to find a role on the defensive line. Can that happen in his fourth year on the roster?

DE Noah Potter – After appearing in four games last season as a true freshman, Potter took a redshirt and will look to develop further this season.

Jacolbe Cowan and Darrion Henry-Young – Both players from the 2020 class enrolled early and were hoping to get a head start on their Ohio State careers. But the spring period was cut short due to the pandemic shutdown, forcing them to spend their spring — and some of the summer — back at home instead of learning from Larry Johnson. They’ll need to take big steps forward in fall camp to earn playing time.