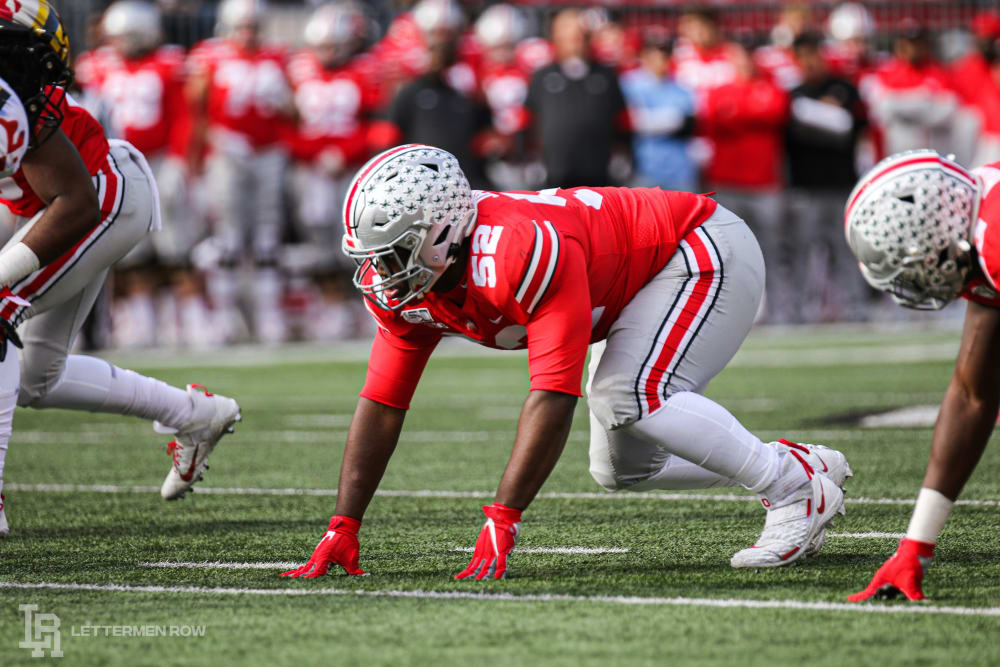 Antwuan Jackson has a chance to make an impact for Ohio State. (Birm/Lettermen Row)

Ohio State had one of the best seasons in program history last year, and it came with the help of some young players. Now as the younger Buckeyes enter another year for the Buckeyes, they may be expected to take on expanded roles. Lettermen Row is breaking down a play from each key inexperienced Buckeye and how it can help provide a glimpse into each of their futures. Next up: Antwuan Jackson can bolster the Buckeyes defensive line.

If the Buckeyes didn’t think that, they wouldn’t have recruited him twice. Jackson, a former four-star recruit from Georgia, originally picked Auburn over Ohio State late in the recruiting cycle of 2016.

When it didn’t work out with the Tigers, Jackson went to community college, then had a chance to pick the Buckeyes again. He did, and now heading into his final season at Ohio State, he could make a huge impact on the defensive line that continually pumps out NFL prospects.

The Buckeyes could have a deep unit this season.

“I think the inside guys are the biggest key,” legendary Buckeyes defensive line coach Larry Johnson said. “Looking at Haskell Garrett, Tommy Togiai, Taron Vincent, Jerron Cage, Antwuan Jackson — those are the guys on the inside who have to really step up. As we were going through the three days of practice, I thought those guys were on the right track to be able to contribute in the fall.”

Garrett and Togiai were contributors on last season’s dominant defense that was loaded in the defensive front. Cage and Jackson stepped in when needed and made plays. Jackson has one more season with the Buckeyes to find a bigger role than just “stepping in.” And Ohio State needs more defensive tackles to be ready for expanded roles, especially with the departure of three key interior linemen.

Jackson could be just what the Buckeyes need. He’s 6-foot-2 and 295 pounds. He has shown he can cause disruption and produce, even if many of his noteworthy plays from a year ago were late in blowouts. If given the chance to be a regular in the rotation, Jackson could reach the potential Johnson and the Buckeyes saw in him when they first recruited him in 2015 — and again in the 2018 recruiting cycle.

They certainly think he can help them win a national title. That’s why they recruited him twice.

Those chances came often, given the amount of blowouts the Buckeyes produced over the course of the season. Against Northwestern on the road in October, Ohio State controlled the entire game, giving some backups a chance.

Jackson won’t likely start on the defensive line next year. With Togiai, Garrett and Vincent, the Buckeyes are going to work Jackson into the rotation. But once he gets on the field, that ability he flashed in the trenches against Northwestern with strength and the agility to fight off a block to make a tackle could certainly help.

Larry Johnson has proven he can develop that well, and the Buckeyes shouldn’t have much to worry about along the defensive front, especially if role players such as Jackson can make run-stopping plays like he did against Northwestern and couple it with some pass-rushing skill when needed.

Ohio State has always believed Antwuan Jackson can do just that.

Continue Reading
You may also like...
Related Topics:Featured, Antwuan Jackson