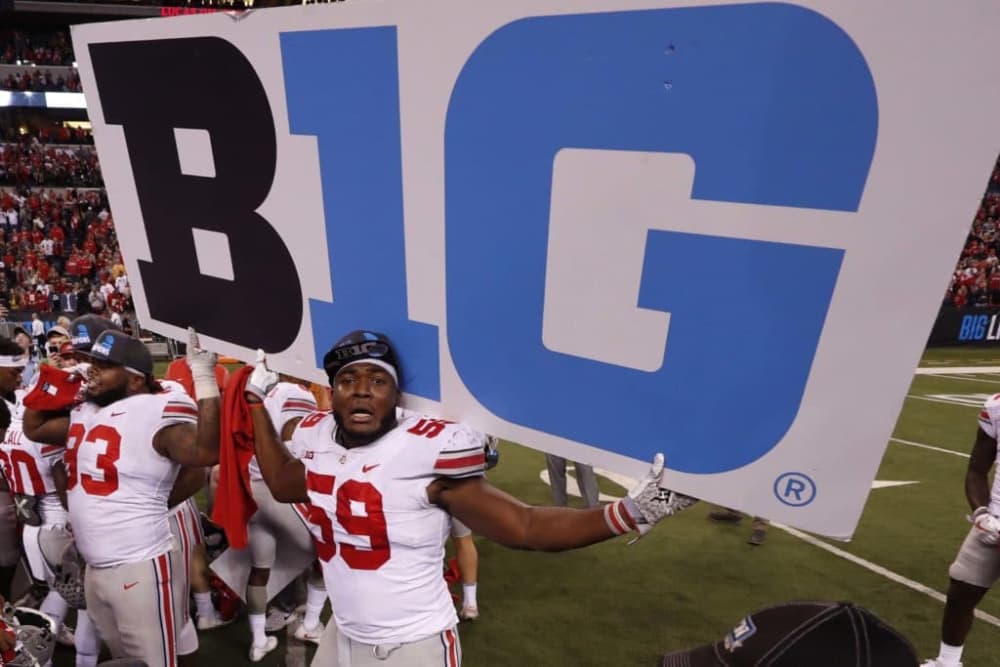 Who will win the Big Ten in 2018? Oddsmakers say bettors should look no further than the last team to do it. Ohio State is favored to win the Big Ten in the latest odds listed by Bovada, coming in at a 3-2 price. Last year’s runner-up Wisconsin is next at 14-5, followed by Michigan at 11-2.

The full list of odds can be found below. For those looking to light their money on fire, Illinois is an enticing bet at 800-1 odds.

The latest individual rankings in the class of 2019 for 247 Sports were released on Thursday, and one Ohio State target paid a big price. St. Louis wide receiver Marcus Washington dropped roughly 500 spots in the rankings, going from the nation’s No. 9 wide receiver to the No. 73 wide receiver.

“I don’t know what happened,” Washington told Lettermen Row. “But that’s crazy. I can’t be too mad, it just adds more fuel to the fire.”

Ebbs and flows in recruiting rankings are bound to happen, but this is a particularly curious case. Prospects who fall that far usually do so over the course of a year instead of in one ranking change, and it’s even more surprising that it happened in summer. If Washington showed serious flaws in the fall with the pads on, that would be one thing. But this shift in opinion on him came during the summer camp circuit in shirts and shorts, with Washington nursing a hip injury to boot.

For those wanting to see the future before it happens, you’re in luck. Thursday’s Ohio State recruiting question asked Birm for his thoughts on what the Buckeyes’ 2019 class might look like by the time September rolls around, and the Lettermen Row director of recruiting gave five bold predictions for what will happen over the next month and a half.

Be sure to check it out, but here’s a quick taste:

4-star wide receiver Jameson Williams is going to the Buckeyes

Jameson Williams is one of the fastest wide receivers in the country and has been a top target for Ohio State for months. He took an official visit to the school in June and has told Lettermen Row that the Buckeyes are his leader. There is not a decision date planned, but I think he’ll commit before the season. That’s why he’s on this list.

How patient is Tate Martell?

In the other Thursday question of the day, Lettermen Row senior writer Austin Ward was asked for his thoughts on what might play out with Tate Martell if Dwayne Haskins returns for the 2019 season. Here’s what Ward had to say about Martell and the constant fear of a transfer from Ohio State fans:

Martell has made it clear from his first day on campus that he came to Ohio State to be the starter, and as competitive as he is, he surely wouldn’t be thrilled with having to wait until after the 2019 season for his shot to lead the program. But maybe a guy who has been widely praised by the coaches for his maturation has a different perspective now. And when it comes to his future, Martell might look at that as a fair amount of time until his turn arrives — especially if he doesn’t have to sit out a year or leave a place he clearly loves. And if the Buckeyes can carve out playing time for him along the way? Even better.

One of the most anticipated annual features in the college football world is Bruce Feldman’s college football Freaks list. This year he’s expanded it to 50 and is releasing it in stages. With No. 11-40 having already been revealed, two Buckeyes are on the list. Here’s what part of what Feldman wrote about defensive end Nick Bosa, who came in at No. 14, and H-back Parris Campbell, who was listed at No. 21.

Folks inside the program gush about Bosa’s flexibility. Buckeyes veteran defensive line coach Larry Johnson also raves when talking about Bosa’s athleticism. “He has great hips. Can really bend. Great bender,” Johnson told The Athletic. “Joey could really bend; Nick can probably get even lower. He also does a great job with his hands. He can really get to your hands. It’s eye-hands coordination. He can get a guy’s hands like crazy — ‘Wow, how’d you get that hand?!’ ”

A lot in store for this group! #Zone6 #IceUp💎 pic.twitter.com/KGn0FnOfja

With a hand from the @OhioStateFB Buckeyes, approximately 250 special needs campers took over the practice fields at the Woody Hayes Athletic Center today for The Special Skills Invitational. pic.twitter.com/k1cOrLFtoH