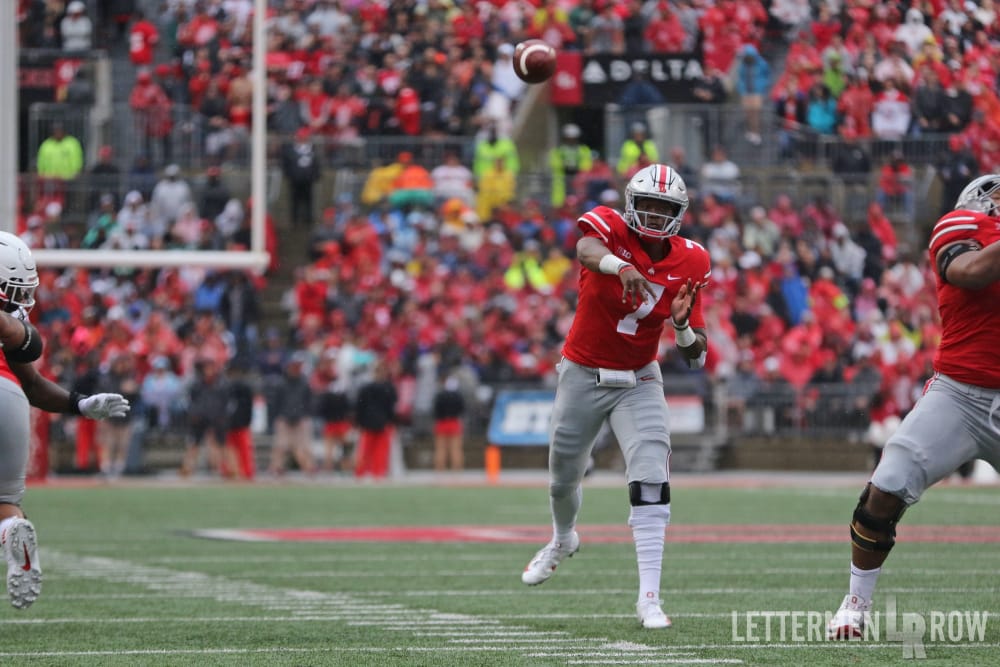 COLUMBUS — The warmup games are over for Ohio State.

Now it’s time to find out just how legitimate the Buckeyes are as national-title contenders.

These are the kind of games that the program works for: Primetime, neutral-site, ranked-against-ranked matchups that come packed with huge stakes and ESPN’s College GameDay on site. And, of course, Ohio State has become pretty comfortable down in the Lone Star State generally and at AT&T Stadium specifically over the last few years, so it might not even be in that hostile of a territory for the clash with TCU.

It’s going to be another interesting week for the Buckeyes with Urban Meyer again on the practice field but suspended for game day against the Horned Frogs. And to kick it all off, Lettermen Row is starting like usual with Five Questions for Ohio State.

Were those the real Silver Bullets for Ohio State?

Maybe it really is as simple as just putting Jordan Fuller back on the field. The Buckeyes looked like themselves again defensively with their play-making safety and captain back patrolling the secondary, and Fuller showed no signs of lingering concern with the hamstring injury that kept him out of the season opener. Ohio State was probably due to take a significant step forward from Week One to Week Two anyway after getting so many fresh faces reps and learning opportunities against Oregon State, and it certainly did by absolutely suffocating Rutgers. TCU will pose a much tougher test, but with the pass-rush dialed up, the linebackers developing and Fuller on the field, the Silver Bullets look to be back on track. 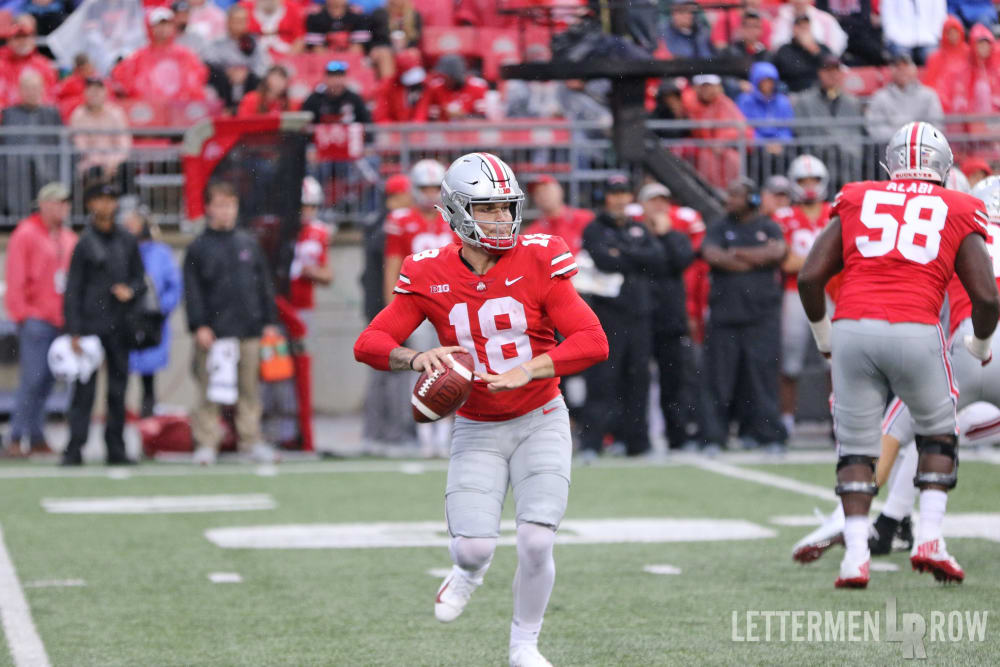 Tate Martell accounted for two touchdowns off the bench for Ohio State against Rutgers. (Birm/Lettermen Row)

What does Ohio State do with Tate Martell now?

There is now some evidence that, yes, Tate Martell is pretty damn exciting to watch with the football in his hands. Obviously there were good reasons why Ohio State has been so clear about its intentions to get the redshirt freshman quarterback involved in the game plan, and his 47-yard touchdown run and 51-yard bomb to Terry McLaurin for a passing score proved he can make an impact. Where it gets tricky, though, is that it still seems like inserting him into the middle of a competitive game could be an unnecessary complication for Dwayne Haskins and the rest of an already high-powered attack. Picking and choosing the right spots to use Martell isn’t going to be easy, but it’s probably going to be tough for the Buckeyes to resist after seeing what he did to Rutgers.

What could Nick Bosa do if he got to play a whole game?

Maybe this is an answer the Buckeyes don’t ever care to find out, but it’s scary to imagine what Nick Bosa’s numbers might look like if we wasn’t limited to essentially just playing a half every week. Obviously that figures to change against stouter competition like TCU or Penn State in a couple weeks after that. But after starting the season with a pair of sacks, two fumble recoveries and a touchdown in just 31 snaps against Oregon State, Bosa didn’t need to work that long against Rutgers to tally three tackles for loss and another sack against Rutgers. When Ohio State kept consistently talking about how Bosa was better than ever throughout the season, it definitely wasn’t lying. 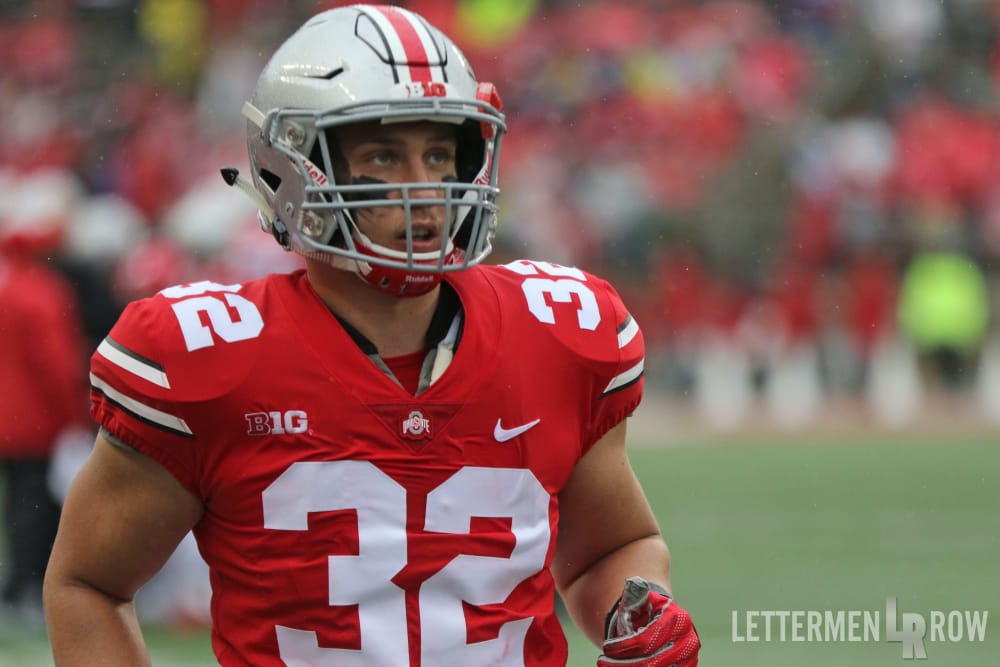 Is Tuf Borland ready for a whole game?

Ohio State has been trying to pull the reins on Tuf Borland to keep him from pushing it too far, too soon in his return from a spring injury to his Achilles. That’s clearly been a smart approach with the middle linebacker, especially since it also allows Baron Browning to get some important reps and experience when Borland is on the sideline. It’s possible that the Buckeyes will wind up rotating both of those defenders throughout the season, but one way or another, Borland figures to be in for a much heavier workload against the Horned Frogs. This will be a big test for his superhuman healing powers.

Which wide receiver will lead the way this week?

The rotation at wide receiver appears stronger than ever, and Brian Hartline’s unit doesn’t seem to have any problems at all sharing the targets or the touchdowns. That makes Ohio State even more dangerous, since it doesn’t have to rely on just one or two weapons to spark the passing attack every week. It also, though, makes it difficult to predict who will produce the next breakout game for the Buckeyes. Terry McLaurin and Johnnie Dixon have both had a turn already, and in a marquee matchup like this one, it feels like it might be time for Austin Mack to shine.