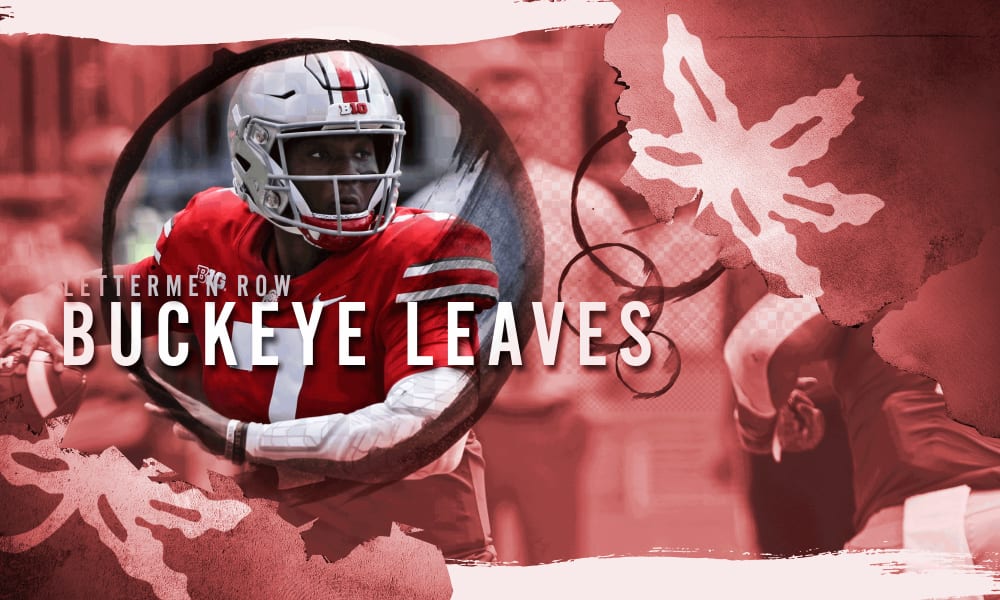 Dwayne Haskins set a couple Ohio State records in his debut as a starter. (Birm/Lettermen Row)

Every week — win or lose — there are a handful of Ohio State players who stood above the rest.

Following the tradition of the helmet stickers that dates back to the days of Woody Hayes, Lettermen Row shares out our version of Buckeyes stickers every Sunday morning for the Buckeyes best performers on offense, defense and special teams.

Ohio State strolled into Ohio Stadium on Saturday morning and beat the snot out of the Oregon State Beavers, unleashing a month’s worth of frustration on their Pacific Northwest foes en route to a 77-31 win in the 2018 season opener.

In a game that featured 11 touchdowns by the Buckeyes, there is no shortage of star performances, but a few guys did stand head and shoulders above the rest.

Here are the picks for this week’s helmet stickers, as determined by the Lettermen Row staff.

Starting debuts don’t get much better than what the redshirt sophomore quarterback gave Ohio State on Saturday.

The Buckeyes had never had a first-time first-stringer throw for 300 yards or 5 touchdowns, and Haskins did both against Oregon State. The offense just looks more dangerous with the rocket-armed passer leading the attack, and Ohio State might wind up setting a lot more records this season.

It’s never a surprise when a Bosa dominates a football game at this point — it’s actually become standard operating procedure — but it’s always a joy to watch.

Nick Bosa was a wrecking ball from the word go against Oregon State, causing havoc in the Beavers backfield for the duration of the first half. He recovered two fumbles, including one for a touchdown, notched two sacks and caused general discomfort for anyone in an orange and black uniform the entire afternoon. Bosa’s performance set the tone early and he was rewarded with the chance to watch the second half entirely from the sideline. That’s a good day’s work.

If Saturday was any indication, Nick Bosa is in for a truly special junior season in Columbus.

The Buckeyes only needed their punter once, but the redshirt sophomore made the most of his only action with an absolute bomb.

Chrisman’s 65-yard boot flipped the field and pinned Oregon State deep, which set the table for a defensive touchdown when Pete Werner forced a fumble that Nick Bosa recovered in the end zone to expand the lead before halftime. The Buckeyes would obviously prefer not to use Chrisman at all, but it’s got to be comforting to know what he can do when he’s on the field.