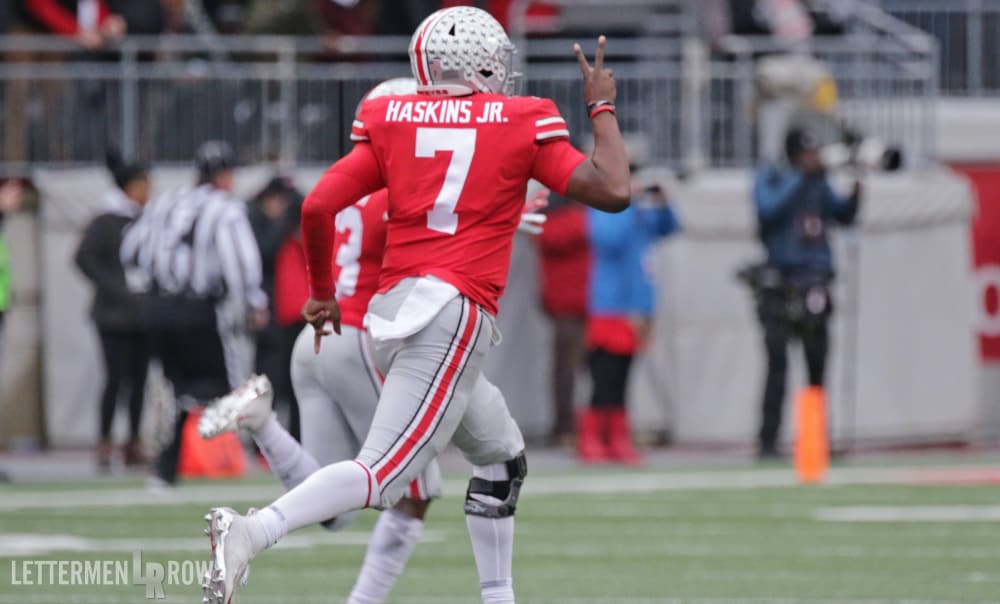 As if what the redshirt sophomore accomplished while the Buckeyes were throttling their rivals 62-39 on Saturday wasn’t impressive enough, the last two days have continued to add to the absurd resumé Haskins has compiled this season.

First, Ohio State had to amend the box score and award him another touchdown after a pop pass to Parris Campbell had initially been credited as a rush. And then on Monday, Haskins broke the Big Ten record for Offensive Player of the Week awards in a season, picking up his sixth to top former Ohio State quarterback Troy Smith’s previous mark.

For Haskins, it was another mind-boggling performance when his team needed it the most.

The Buckeyes redshirt sophomore signal caller threw for six touchdown passes against the country’s top-ranked defensive unit and amassed 396 yards through the air. Those numbers helped him eclipse a pair of Big Ten season records, passing Drew Brees on his way to a new conference mark in passing touchdowns during a season and another former Boilermaker, Curtis Painter, for the league’s most passing yards in a season.

“I’m not done yet,” Haskins said after the game. “But I want to be one of the best to ever do it when I get done playing at this university. This is a dream come true for me.

“I have no words to say about, like, all we’ve done this year. It’s been a dream of mine to play here at this university for a while, and to break all these records and to go win these games is a blessing. And we’re going to put on a show next week.”

Ohio State will need another big one from Haskins if the Buckeyes are going to win a Big Ten title — and possibly earn a spot in the College Football Playoff once again.

Ohio State: Five Questions as Buckeyes gear up to defend Big Ten title
Ohio State: Do Buckeyes have any reason for concern with Northwestern?