COLUMBUS — If Dwayne Haskins isn’t going to be around Ohio State for long, it’s a good thing he’s cramming in so many possible career-defining moments into a short period of time.

The redshirt sophomore quarterback has only started five games and was pressed into one more pressure situation last season off the bench last year. And in that small sample size, Haskins has now already engineered three second-half comebacks away from home against top-flight competition, pulling out the kind of unforgettable wins that help build legacies.

Is it early for that kind of conversation with Haskins? Probably so, but he’s already building a compelling case that is more than just eye-popping statistical numbers.

“We just had adversity there and had to keep fighting, keep swinging,” Haskins said after his latest rally on the road against Penn State. “It wasn’t pretty for pretty much the whole game, but we relied on each other, had faith in each other and came out on top.

“With me there’s never no bleak [moments]. Every opportunity we get on the field is an opportunity to go win a game. It was tough, but we wanted it tough.” 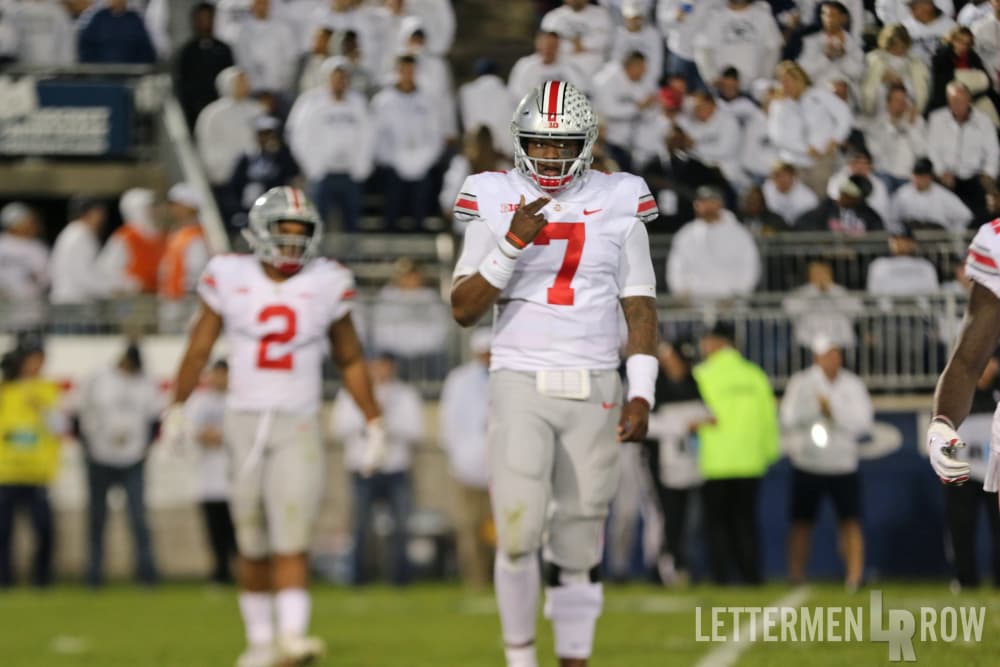 The challenge can hardly get much more daunting than a two-score deficit against a top-10 opponent in front of a Whiteout crowd of 110,889. But Haskins was unfazed by the quality of competition, the environment and the stakes — which should come as no surprise by now given the way he finished last season.

His appearance off the bench, in the cold, trailing against a rival with one of the nation’s best defenses and a Big Ten championship potentially on the line last year at Michigan helped establish what Dwayne Haskins is all about even before he took over as the starter. And after leading Ohio State back from a halftime deficit in Week Three in a neutral-site matchup with TCU, he’s now added a third that was clinched with make-or-break 96-yard drive.

“One of the great drives in Ohio State history,” Ohio State coach Urban Meyer said. “The first half was awful in a lot of ways, and give credit to our opponent, because that’s a hell of a team we just played.

“[Offensive coordinators] Ryan [Day] and Kevin [Wilson] did an excellent job making adjustments and started protecting him and keeping him upright. And when he’s upright, he’s very good.”

Dwayne Haskins has also proven to be at his best when the Buckeyes need him the most, which is reminiscent of the last Heisman Trophy winner the program had at quarterback. Former Ohio State star Troy Smith was back in the Lettermen Row film lab to analyze what makes Haskins a legitimate contender for the Heisman and a leader worthy of competing for a national championship in the latest episode of BuckIQ.