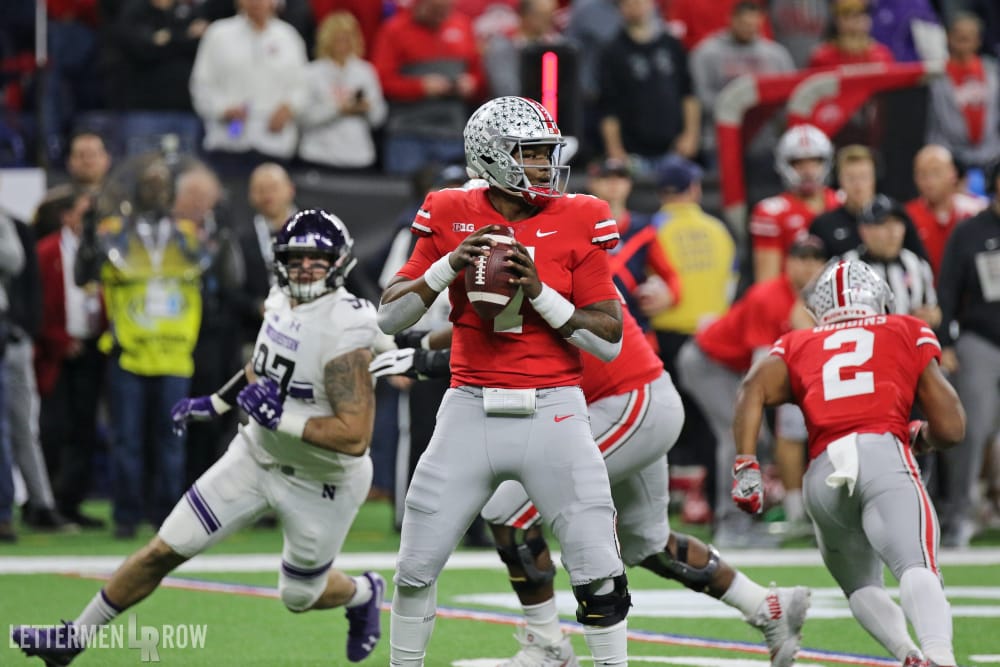 And arguably the best quarterback in America on college football’s championship Saturday threw for an eye-gouging 499 yards.

Yeah, Ohio State once again is your Big Ten Champion.

Fueled by another singularly sublime effort from sophomore sensation Dwayne Haskins, and enough defensive stops against pesky Northwestern, the Buckeyes prevailed, 45-24, for their third Big Ten championship since 2014.

OLAVE IS QUICKLY BECOMING A STAR

Chris Olave is continuing his statement-making emergence as the next likely great Ohio State wide receiver.

After a breakout-effort in last week’s romp in The Game, Olave scored what proved a critically decisive touchdown in the Buckeyes’ conference title triumph.

Showing football smarts beyond his years, Olave set up the Northwestern defender on a post route and then Olave used his body to shield off the defender and make a 29-yard touchdown reception look easy and lift OSU to a 31-21 lead.

After Northwestern had trimmed the deficit to 31-24, Haskins sent a final, soaring missive that emphasized the Buckeyes would not lose this game.

Moments later, the duo cleaned up the march when Haskins scrambled and found Dixon lonely in the back of the end zone, no one around him, for Haskins’ 50th touchdown of the season and a 38-24 lead.

Marching 77 yards on 10 plays, the Buckeyes capped the tone-setting possession with a 16-yard Dwayne Haskins-to-Terry McLaurin connection that kept the duo’s torrid touchdown connection ablaze. Haskins’ 43rd touchdown toss was the 10th of the season to McLaurin and foreshadowed more to come in this title bout. 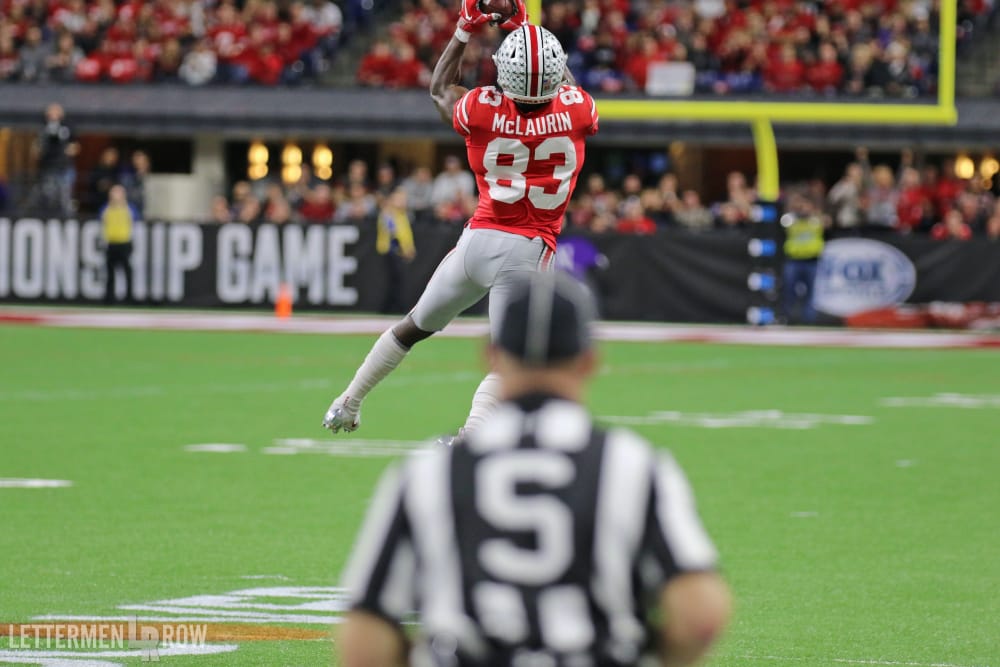 Ohio State’s secondary has surrendered some gashing plays this season, but Northwestern’s decision to test Shaun Wade early in the second quarter of this game proved unwise.

As Clayton Thorson tried to hit Flynn Nagel down the right sideline, Wade matched Nagel step-for-step. More importantly, Wade had inside position and ideal form as he walled off Nagel and made the leaping interception, with his momentum carrying Wade into the end zone.

It was just one of many instances through the game’s opening 30 minutes that showcased the Wildcats’ inability to match up with the Buckeyes’ raw athleticism and speed. 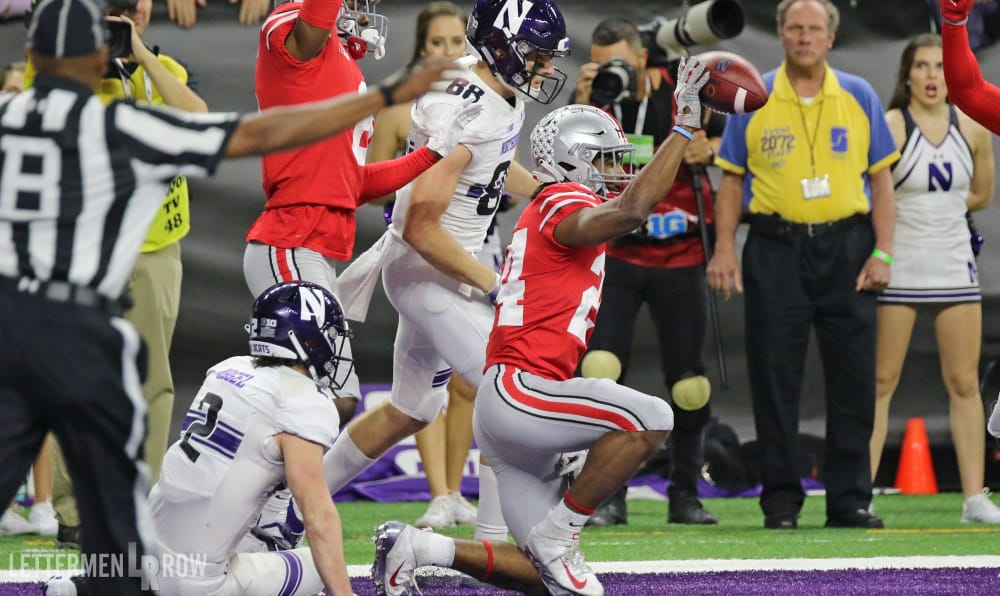 As the Wildcats tried to again answer an early seven-point deficit, they had moved the ball out near their own 40-yard line. Dropping back to pass on third down, Thorson seemed not to see nor sense Ohio State terror Chase Young bearing down unabated to a game-changing explosion.

Young absolutely detonated Thorson as the Northwestern signal-caller tried too late to fire a ball downfield.

Initially ruled an incomplete pass, the Big Ten officials and instant replay crew didn’t need an overly long review to deem the play a fumble, which had been recovered by Jordan Fuller at the 46.

Ohio State tried to further establish its running game on the ensuing possession before it settled for an 42-yard Blake Haubeil field goal. 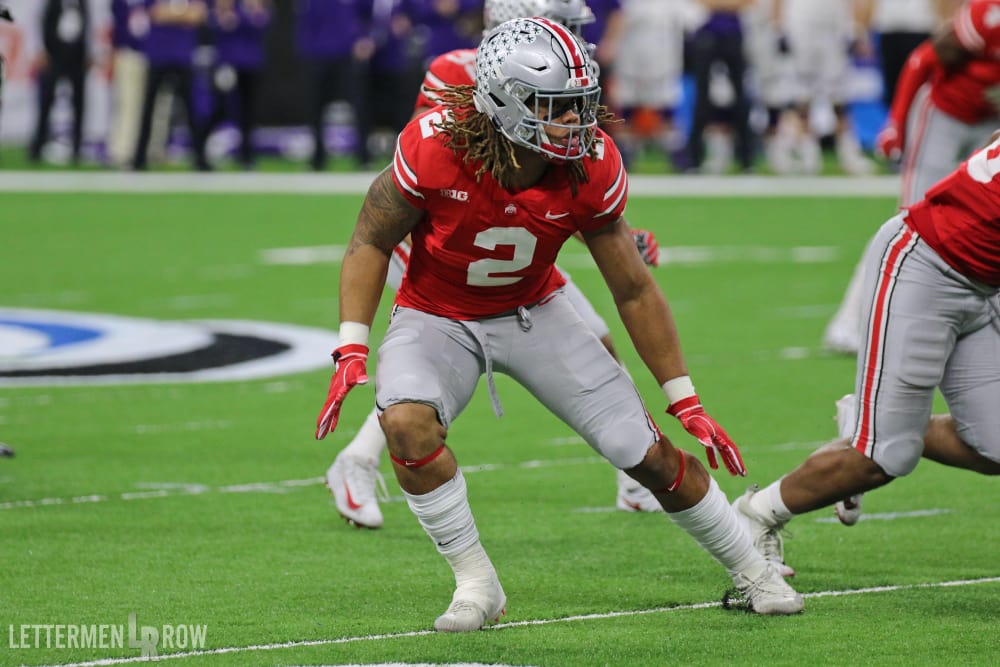 BACK UP TO FLY FORWARD WITH HASKINS-TO-MCLAURIN

Ohio State’s defense had forced the third of four first-half punts from Northwestern’s Jake Collins and didn’t take over in especially good field position at its own 22.

No matter with the weapons on this squad. A short pass to Weber followed quickly thereafter by a Haskins 7-yard scramble for a first down helped the Buckeyes march once again into Wildcat territory.

But a holding penalty, one of four first-half flags on OSU, threatened to stymie the march, as did consecutive unsuccessful run plays.

Haskins-to-McLaurin, however, is a combo that knows no limitations. On third-and-long, McLaurin ran a pretty standard take-off route down the sideline in front of the Ohio State team. He outdistanced the defender, never broke stride and cradled Haskins’ picture-perfect spiral for a commanding 24-7 halftime edge.