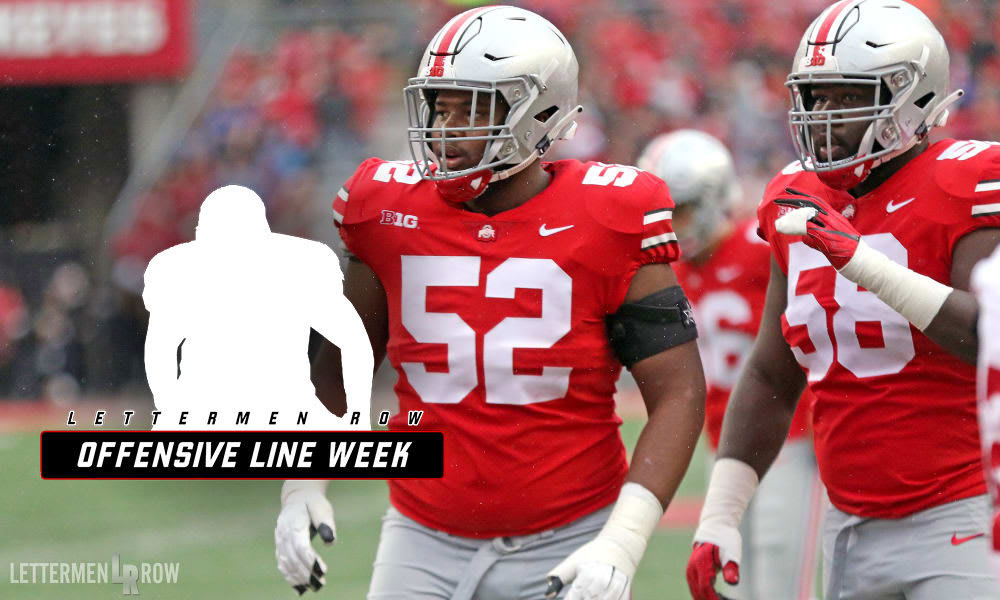 Wyatt Davis is set to be a full-time starter for the first time at Ohio State. (Birm/Lettermen Row)

COLUMBUS — Ohio State was dangerously thin at offensive line in the spring.

Multiple players were out with injury. The Buckeyes lost four players to graduation or the NFL. The coveted transfer they landed hadn’t arrived to campus yet.

But the spring is over, and the Ohio State offensive line is starting to come together. Still, the Buckeyes have some questions to answer as to who the starters might be along the offensive line once Aug. 31 arrives.

As part of Offensive Line Week at Lettermen Row, we’re breaking down who the starters might be in the trenches and who could take over for them if something were to happen.

Ohio State left tackle Thayer Munford will be back to full strength for training camp with the Buckeyes. (Birm/Lettermen Row)

Munford, the lone full-time returning starter on the Ohio State offensive line, will serve as the anchor for the Buckeyes offensive line. He played in 13 of Ohio State’s 14 games last season and 25 career games with the program. He will enter the fall as the most experienced returning lineman on the roster, and he’ll have to help transfer guard Jonah Jackson acclimate to the left side of Ohio State’s line.

Jackson enters the fold as a former all-Big Ten honorable mention performer at Rutgers, where he was also a captain. The Buckeyes beat out Oklahoma for Jackson, who was the highest-rated transfer guard in the offseason transfer portal. He immediately helps the Buckeyes with depth along the offensive line, and he has enough experience and talent to earn a starting spot during fall camp.

There was only one guard in the 2018 recruiting class better than Myers, Wyatt Davis, and the two might line up beside each other this season. Although he was recruited as a guard, the Buckeyes slid him over to center, and he’ll take over a position that is littered with tradition from the last handful of years. Myers doesn’t have much experience yet at Ohio State, but he’s talented enough to overcome that. He’ll command the line from the middle.

Davis was the backup for Demetrius Knox at right guard a season ago, so it seems logical for the former 5-star prospect to take over in the starting role. At a massive 6-foot-4 and 313 pounds, Davis started two games last year when Knox went down with an injury. Those starts happened to be in two of the biggest games of the season: The Big Ten Championship game win over Northwestern and the Rose Bowl win over Washington. He played well in those two games, and that springboards him into a starting role. 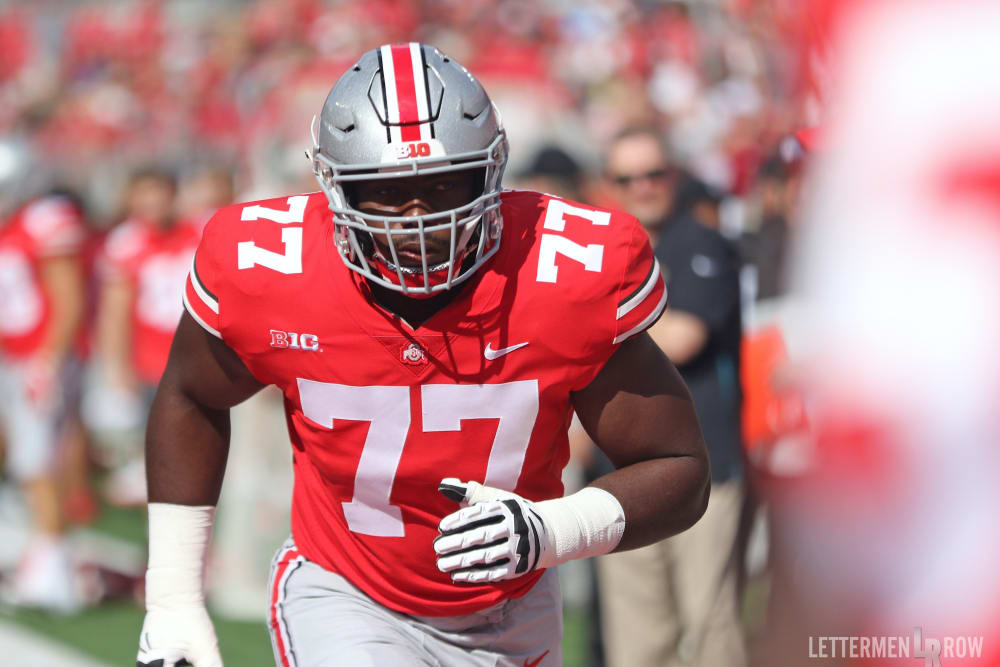 Nicholas Petit-Frere emerged as the favorite in the battle for right tackle. (Birm/Lettermen Row)

The redshirt freshman had to gain weight by eating 8,000 calories per day and out-work Brandon Bowen in the spring, but he impressed in March and April to looks to have the leg up right now at right tackle. Petit-Frere, the No. 1 tackle prospect in the 2018 recruiting class, arrived with enormous expectations. But he proved he can block quality defensive linemen when he was keeping the Ohio State defensive line at bay this spring.

Branden Bowen, RSr.: After starting the first six games of the 2017 season, Bowen broke his leg in a game against Maryland and hasn’t started a game since. That might not change this year, but Bowen will undoubtedly be one of the keys along the Buckeyes offensive line. He can play anywhere up front aside from center, making him irreplaceable for the depth of the offensive line. His experience will help Ohio State at some point during the season.

Joshua Alabi, RSr.: Alabi was the backup left tackle behind Munford last season, too, and this season will likely be no different. He’s a fifth-year senior who has played in 24 games as a Buckeye, so he adds some much-needed depth to the Ohio State offensive line room this year. Depth was an issue last year, but Alabi’s return will help cure some of that concern.

Gavin Cupp, RJr.: While Jonah Jackson was unable to join the Buckeyes for spring practice, Cupp took the majority of the first-team reps along the offensive line. During that time, he showed that he can hold his own when he’s called upon, and the coaching staff has some depth on the line when it comes to Cupp. Jackson’s arrival slides Cupp to a backup role for the Buckeyes, though. 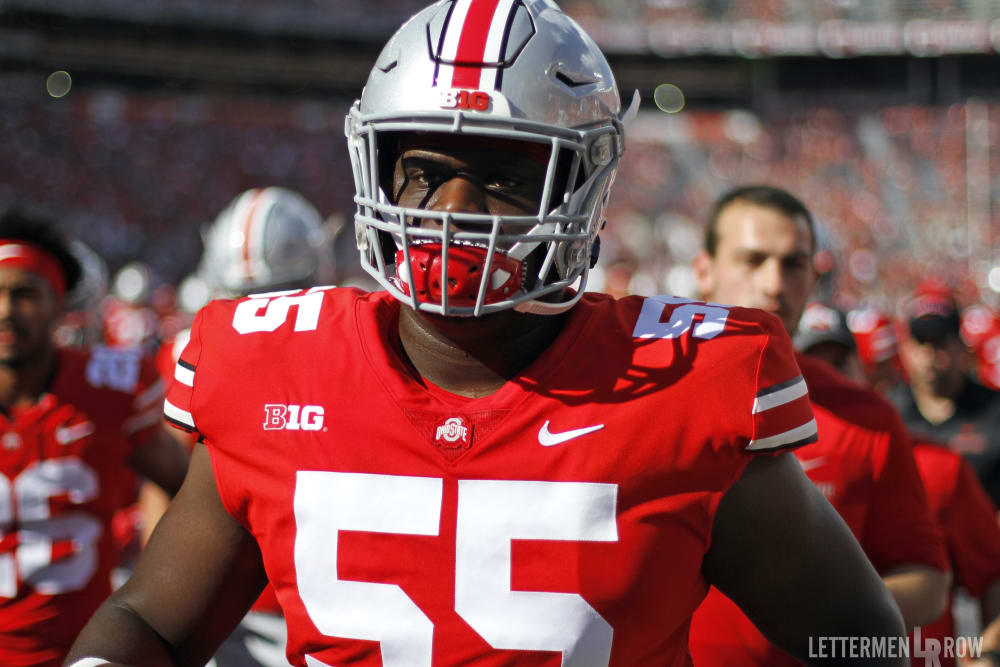 Matthew Jones will be in the mix for playing time this season. (Birm/Lettermen Row)

Matthew Jones, RFr.: Jones, the No. 1 center prospect from the 2018 recruiting class, will enter his second season with the Buckeyes as a prime candidate for playing time, but it’s not likely that it will be in a starting role. He’ll have to wait for his chance, which could come at any time throughout the season.

Harry Miller, Fr: Miller couldn’t enroll early because he went on a missions trip to Nicaragua this spring, but he made sure to be in on meetings with coach Greg Studwara via FaceTime when he could. Miller, the No. 2 center in the last recruiting cycle, hasn’t participated in a practice for the Buckeyes yet, but head coach Ryan Day thinks Miller can compete for a starting spot right away. Those are huge words of confidence for Miller, who will have to prove it once Ohio State opens fall camp.