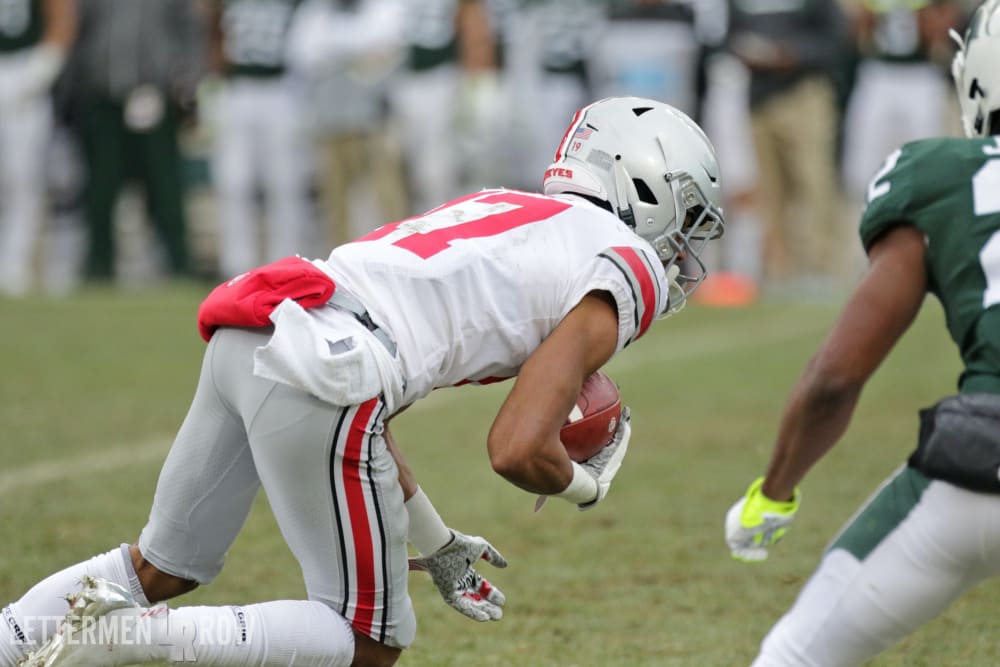 Ohio State wide receiver Chris Olave made a pair of big-time catches for the Buckeyes against Michigan State. (Birm/Lettermen Row)

COLUMBUS — Chris Olave wasn’t sure exactly what the schedule was going to look like for his freshman season at Ohio State.

But whatever the Buckeyes envisioned for him when he arrived on campus, the young wide receiver has clearly exceeded it.

There hasn’t been any question about the talent, work ethic or potential since the moment Olave arrived on campus and instantly started turning heads in the summer. But given his age, a still relatively slight frame and the amount of depth ahead of him on the depth chart, neither Ohio State nor Olave were banking on much more than a role on special teams.

So, no, making a couple big-time catches on the road in a frigid, physical matchup against Michigan State wasn’t exactly in the plans.

“Boy, he’s going to be good,” Ohio State coach Urban Meyer said. “He’s way ahead of schedule. Just on special teams, he’s doing good for us and, gosh, I think he had a couple catches on Saturday — and one was a big one across the middle.

“He’s going to be a fine player. He’s tough, he’s smart and very mature for his age.”

All of those assets have paid off in a hurry for Olave, who was thrust into a more prominent role heading into the critical November stretch run after starting wideout Austin Mack was lost for the season with a foot injury.

Olave’s numbers are still relatively modest, and his two receptions against Michigan State doubled his total for the season. But Ohio State quarterback Dwayne Haskins clearly showed plenty of confidence in him while coming his way with a second-and-14 throw, and Olave did precisely what he set out to do this season by proving he could be trusted to make tough catches.

“I don’t know what [ahead of schedule] means,” Olave joked. “I just come out here every day and try to get better. Coming into Ohio State, I knew all the receivers were coming back, so I just wanted to come in and get better, compete, try to get on the field on special teams or something. Ahead of the schedule — I just came in trying to learn the plays and get everything down and just work hard every day to try to earn a spot.

“Right when I got here, I went out there to try to earn the trust of the coaches, just being myself. My guys all trusted me [Saturday], and I just wanted to make an impact in the game and do whatever I can.”

Those chances only figure to increase now down the stretch for Olave.

And the expectations should be adjusted accordingly.

Baron Browning out for Ohio State

Ohio State coach Urban Meyer downgraded the status of linebacker Baron Browning from earlier in the week, officially ruling him out for the road trip to Maryland on Saturday.

No other injury issues were mentioned for the Buckeyes, who have been finally getting a bit of good luck in the health department.

“Baron Browning won’t make it this week,” Meyer said. “I think everybody else is good to go.”