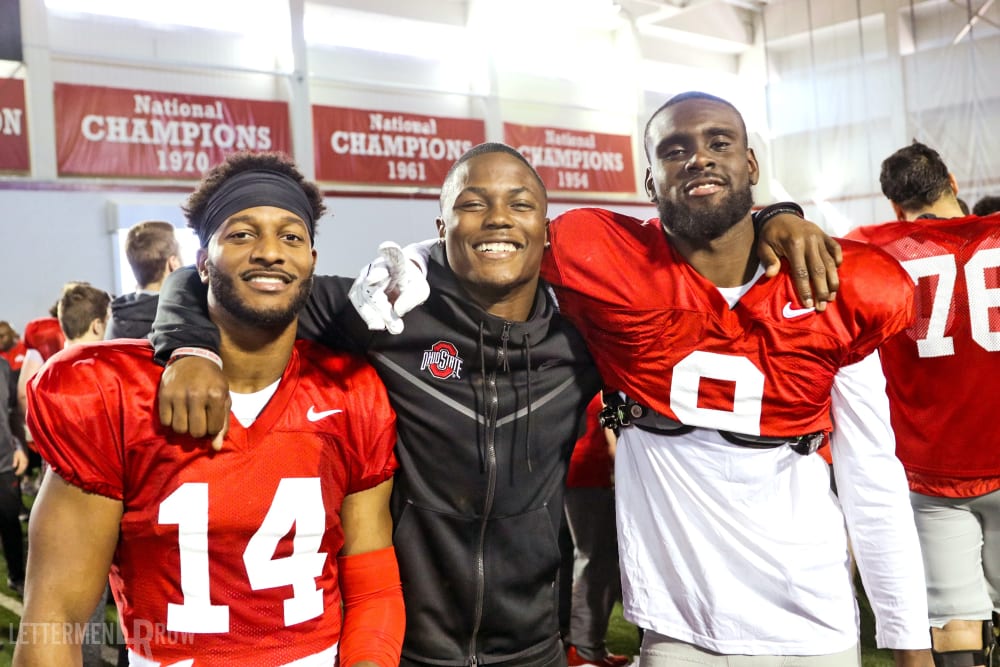 Ohio State is continuing to pump out NFL wide receivers and is well stocked for the future. (Birm/Lettermen Row)

The speculation, debate and conversations about Ohio State never end, and Lettermen Row is always ready to dive into the discussions. All week long, senior writer Austin Ward will field topics about the Buckeyes submitted by readers and break down anything that’s on the minds of the Best Damn Fans in the Land. Have a question that needs to be tackled, like the one today about Ohio State and the loaded group of wide receivers? Send it in right here — and check back daily for the answers.

-Is this the best run of WR talent Ohio State has ever had?
-Does Hartline push for a bigger role in play calling in the next few years?
-Is hiring within always the best thing to do when looking for position coaches, or is it good to look outside to get a new perspective?

Ohio State has been cranking out NFL wide receivers for decades, so that’s really nothing new for the program.

The reminders of the rich tradition were plastered on the wall of the office Brian Hartline returned to this week at the Woody Hayes Athletic Center. The pictures date back to impressive runs in the 1990s with guys like Joey Galloway, Terry Glenn and David Boston reeling off first-round selections for the program and the 2000s when Michael Jenkins, Santonio Holmes, Ted Ginn Jr., and Anthony Gonzalez were continuing that pipeline, clear reminders of just how long Ohio State has been producing elite talent at the position. Or course, Hartline is an example of that himself — both as a decoration in the meeting room and the guy in charge of it now.

So, is Ohio State in the midst of the best run of wide receiver talent in school history? There’s a potential case to be made as the machine has roared back to life after a bit of a lull that famously led to Urban Meyer calling the unit a “clown show” shortly after his arrival. For the second year in a row, the program had three seniors either drafted or signing free-agent contracts, and that combined with the record-breaking success of Michael Thomas and the breakout rookie performance from Terry McLaurin have put the Ohio State receivers pack in the spotlight. With Chris Olave poised to become a possible first-round pick next year and Garrett Wilson already living up to the five-star hype, there is also no sign of the Buckeyes slowing down as an assembly line.

For now, though, it might be a bit too soon to crown this as definitively the Golden Era for Ohio State wideouts. But considering the pace the Buckeyes are on right now, it’s entirely possible that they are on the way to the title as top-ranked recruits flock to Columbus to play in Ryan Day’s offense with Hartline providing his expertise as the position coach and daily battles against the best cornerbacks in the country sharpening the development. On paper, the Buckeyes just signed perhaps the most impressive group of wide receivers in the modern era of recruiting — and while they obviously have a long way to go, the culture and expectations that have now been firmly established make it seem like a safe bet they’ll only enhance the program’s reputation at the position.

“They’re talented, they’re talented,” Day said in March. “What strikes me, with all the 7-on-7s and all the things going on throughout America, they’re further along than maybe receivers were five to 10 years ago. Certainly you can see a guy like Jaxon [Smith-Njigba] who has played in Texas, where they have those activity periods. They have so many reps under their belt, it just makes sense for them. You can see it today. You can see the talent of Julian [Fleming] and just his ability to get off of a line of scrimmage and make plays down the field and his size. Gee Scott really surprised me just how mature his releases were getting off the line of scrimmage. And then Mookie [Cooper] flashed.

“I think all four of them really have a chance to play and be successful. Now they have a long way to go, but for Day One [practice], better than expected.”

The Buckeyes aren’t exactly known for dishing out hyperbole, which means those rave reviews the early enrollees were producing after winter conditioning and just three practices carry a lot of weight. There is no doubt the bar has been raised thanks to the example set by guys like Parris Campbell, Johnnie Dixon and McLaurin. Then K.J. Hill, Austin Mack and Binjimen Victor did their part to protect the legacy last year. That work has paid off by making the Buckeyes even more appealing to elite talents on the trail from coast to coast, and that has perhaps made Columbus the premier destination for receiver recruits right now.

That has given Ohio State a chance to turn this current period into the best in school history at receiver. But the work probably isn’t done yet.

Continue Reading
You may also like...
Related Topics:Featured, brian hartline

How Baron Browning made versatility known for Buckeyes
Scarlet Sunrise: Buckeyes could return to practice facility in June
Advertisement