Connect with us
Tyreke Smith could be a future star along the Ohio State defensive line. (Birm/Lettermen Row)

COLUMBUS — At some point, a full-time replacement for Chase Young and a guy who can take the torch as the next superstar pass-rusher for Ohio State will be needed.

That time probably hasn’t arrived yet. But while Young waits for his clearance from the NCAA to return, the Buckeyes are getting a pretty good look at the next in line behind him.

Tyreke Smith is finally looking healthy and poised for the breakout that was expected of him dating back to the spring. Zach Harrison is showing why he was a five-star recruit and wasting no time making an impact during his freshman campaign. And while there are still a few dominant defensive tackles helping shoulder the load and position those ends for success, last week’s throttling of Maryland by top-ranked Ohio State was a reminder that the pipeline isn’t slowing down at all for the Rushmen.

“They all wanted to show they’re a team,” Ohio State coach Ryan Day said. “This is a defense, and this is a defensive line unit, that is more than just one person. And I think they had their chests out and were proud of the way they played today, and they should have. 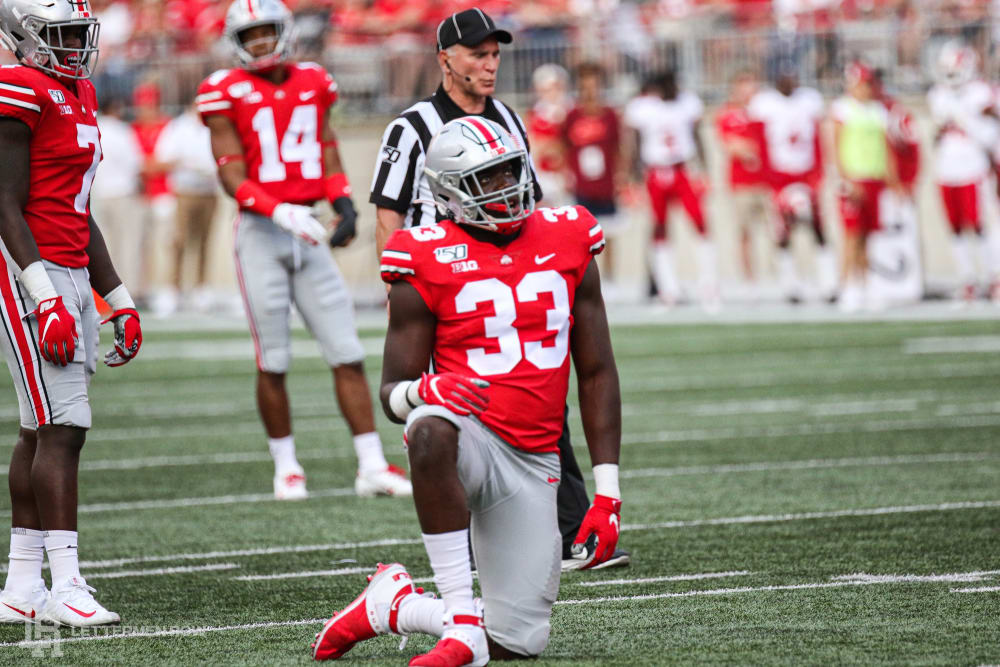 Ohio State freshman Zach Harrison chipped in a sack in the win over Maryland. (Birm/Lettermen Row)

Smith and Harrison weren’t working out there alone, of course. But their three combined sacks sent a message that they’re ready to produce for Ohio State right now whenever they’re needed. And when Young inevitably leaves for the NFL Draft after the season, they’re prepared to take over in even more prominent roles down the road.

Of course, it helps that Davon Hamilton was also out there mauling offensive linemen and tallying two sacks of his own from his spot on the interior. And guys like Robert Landers and Jashon Cornell are also doing some dirty work to get the edge guys in advantageous positions — just like they have for Chase Young all season as well.

But Ohio State has built itself into arguably the top standard bearer for pass-rushing success at defensive end with Young following in the footsteps of Nick and Joey Bosa, Sam Hubbard, Tyquan Lewis and more thanks to the work of legendary position coach Larry Johnson. And clearly that pressure isn’t going to bog down Harrison or Smith.

How did Tyreke Smith and Zach Harrison respond when thrust into the starting lineup for Ohio State? What did their performances while Chase Young was on the shelf mean for the Buckeyes now and into the future? Where could those defensive ends still find ways to get better? Former Ohio State captain Zach Boren popped into the Lettermen Row film lab to break it all down and answer those questions in the latest episode of BuckIQ.