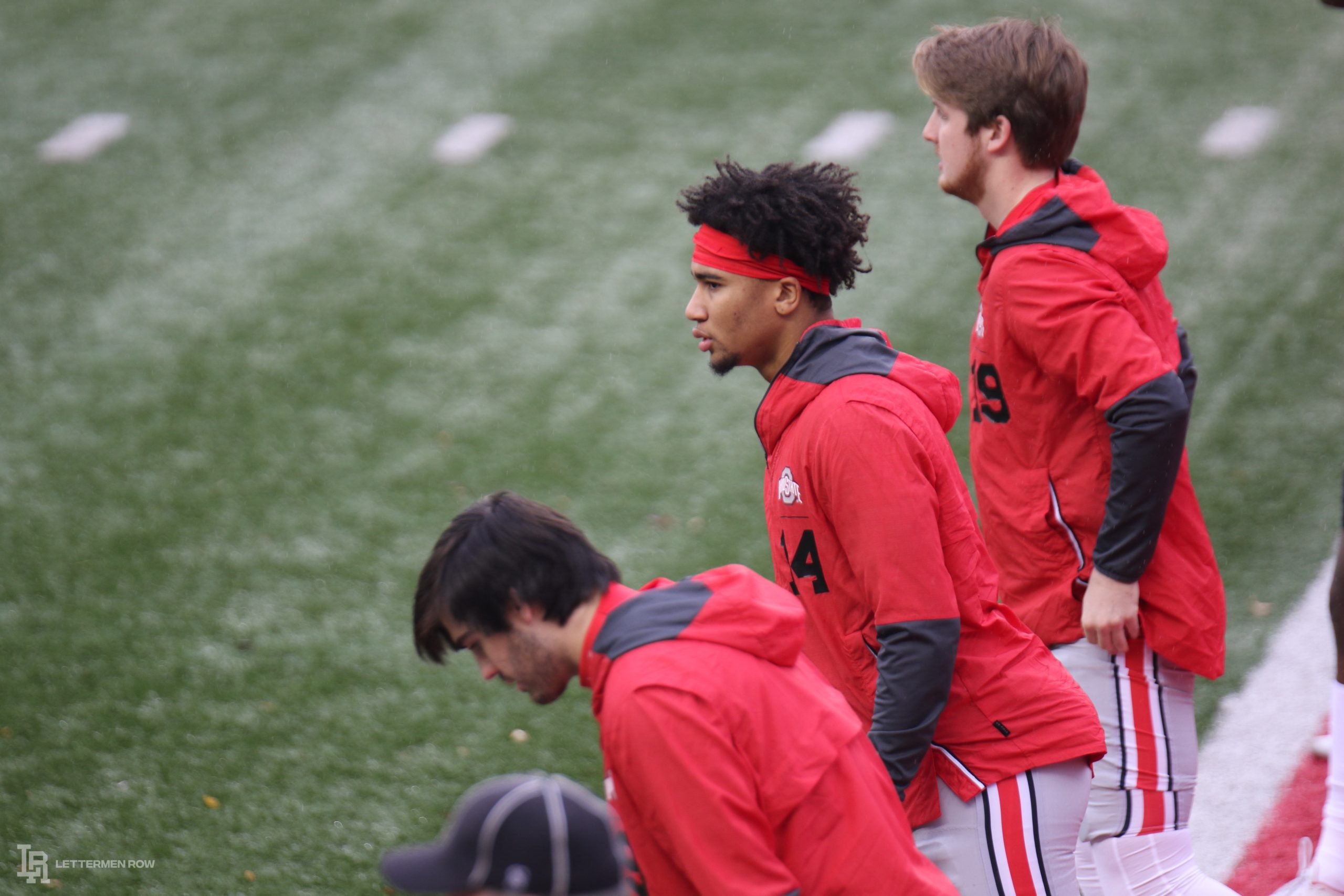 COLUMBUS — The competition at Ohio State is already well underway.

Now, though, the Buckeyes can actually take it back to the field and see exactly what they’re working with at the most important position on the roster.

C.J. Stroud and Jack Miller have been battling against each other from the moment they arrived last winter. In classrooms, in workouts, during practice and even with the limited reps they were afforded during the pandemic-shortened season that didn’t leave them quite as many opportunities as they were expecting. So, this spring is really nothing new from that vantage point for the Buckeyes, although the addition of Kyle McCord adds another fascinating wrinkle to a competition that will undoubtedly shape the national-title race.

“Those guys are going to roll [spring reps],” Ohio State coach Ryan Day said. “And they’re going to get as many reps as they can. If one guy starts to separate himself early on, then he goes and runs with it. I look at the spring and the preseason as a continuation of each other. If we had 15 practices in spring, the first practice of the preseason is really practice No. 16. Usually in these situations, it takes care of itself. Somebody steps up and if they don’t, we keep rolling from there.

“I wish we were further along. I wish they had gotten more game reps. You don’t really know what you have in a quarterback until they’re playing in the game. These guys have very, very limited reps. You would have more if you had a normal spring, preseason and then a season.”

The Buckeyes are expecting more normalcy starting on March 19 when camp opens, and there is certainly some urgency when it comes to developing the three talented options fighting to replace Justin Fields. What needs to be known heading into spring? Lettermen Row is starting the Spring Forecast series with a closer look at the quarterbacks. 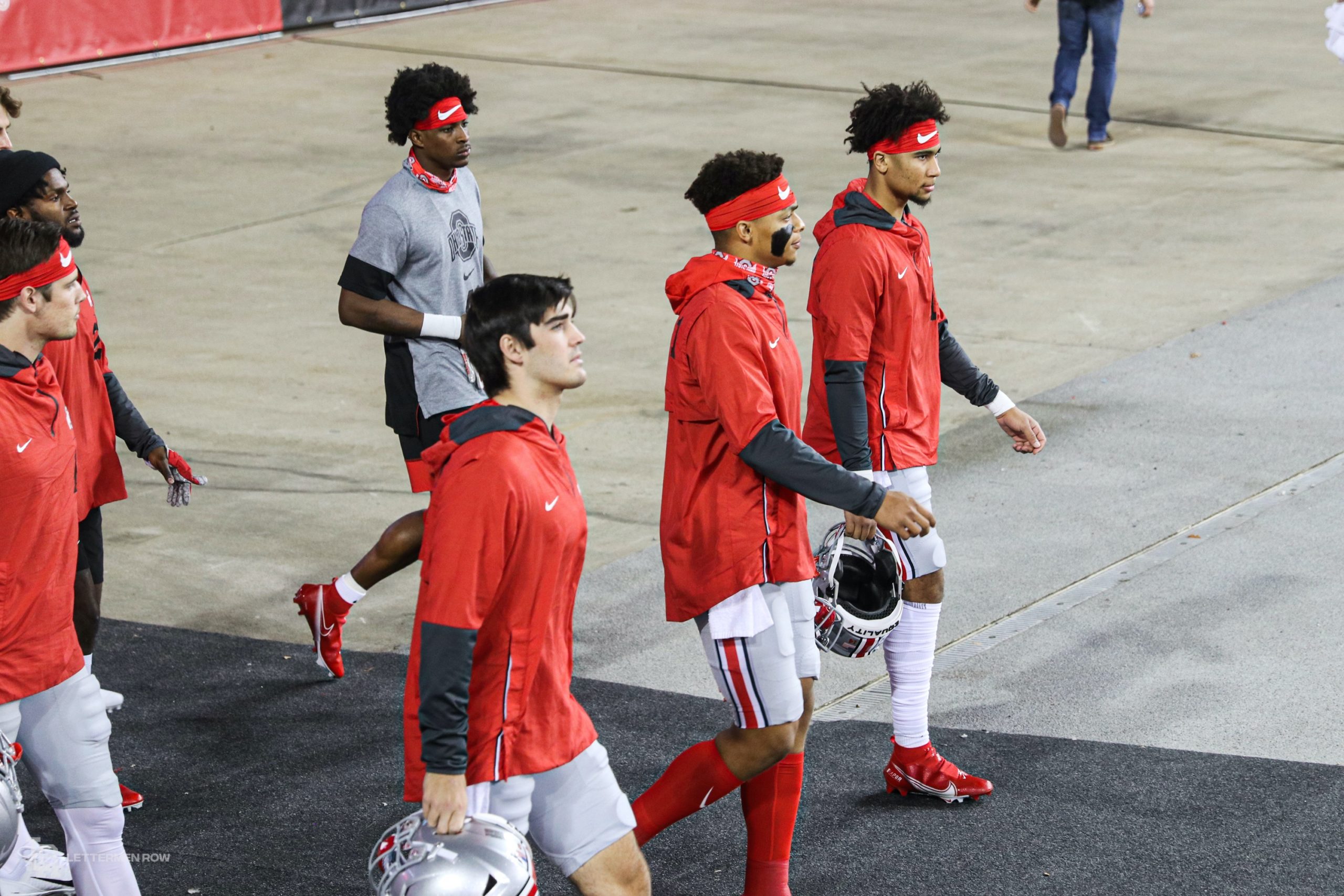 There is no way for Ohio State to sugarcoat it. Justin Fields might be the best quarterback the program has ever had, and replacing his productivity and leadership is a massive challenge for the Buckeyes and the contenders vying to replace him. Fields could make every throw, his mobility expanded the offensive arsenal and his toughness proved to be legendary as he blossomed into a first-round NFL Draft pick while winning a pair of Big Ten titles.

Ohio State is absolutely loaded at every other spot on the depth chart, so that could take some of the pressure off for the next guy in line to lead the attack. But on the flip side, it also amplifies the importance of having the right guy in that role, since the baseline requirement is guiding the Buckeyes to another conference crown and the College Football Playoff. There is always pressure on a quarterback at Ohio State, but there’s even more now that Fields has raised the bar at the position.

The Candidates: Buckeyes have three talented passers on hand

Ryan Day has enhanced his reputation with quarterbacks every year at Ohio State, and the nation’s best recruits have certainly taken notice of the way he develops passers and puts them in position to thrive offensively. So, the pipeline is full of touted recruits bursting with potential, with C.J. Stroud and Jack Miller now joined by five-star freshman Kyle McCord heading into spring camp.

Stroud and Miller will have a head start thanks to the year they’ve already spent in the program, disjointed as it may have been. That time working with Day and quarterbacks coach Corey Dennis is invaluable and significant when it comes to learning the playbook, plus those guys both have a taste of what it’s like to step on the field with the Buckeyes and have been in the strength program for a full year. McCord has the physical tools to put himself right in the mix as well, but it’s certainly going to be a taller order for him as he tries to close the gap.

The Forecast: C.J. Stroud will emerge to lead Ohio State

The Buckeyes have a clean slate and are intent on giving all three quarterbacks a fair shot to earn the job. But even if nobody is officially designated as the leader heading into spring, it was clear last fall that C.J. Stroud had pushed ahead to claim the backup job and would effectively have the inside track to taking over for Fields. The water was muddied a bit early in the season when Jack Miller was the first guy off the bench in mop-up duty, but Lettermen Row sources indicate that was precautionary because of a minor injury for Stroud — who by the end of the season was coming in during pressurized situations whenever Fields was forced to the sideline.

Stroud has size, arm strength, more athleticism than he tends to get credit for and the kind of swagger that appears to resonate with his teammates. He emerged relatively late in the recruiting process as a future star, but his undeniable upside was a key factor when Ohio State decided to pursue him in the same class as Jack Miller. There’s plenty of appeal to Miller’s game as well, and there’s no reason the Buckeyes couldn’t win at a high level with him either. The expectation here is that even that one season is enough to separate those second-year quarterbacks from Kyle McCord — and that from there, Stroud will maintain his edge and become the next starter for the Buckeyes.