Connect with us
Ohio State quarterback C.J. Stroud appears to be leading the battle. (Birm/Lettermen Row)

COLUMBUS — Ohio State prefers to only measure one practice at a time.

But even the Buckeyes couldn’t help but notice that the amount of those individual opportunities is starting to dwindle.

At the start of the penultimate week of spring practice, Ryan Day gathered his program up for a huddle near the FIGHT banner in the Woody Hayes Athletic Center. The urgency was unmistakable for the Buckeyes on Monday morning.

Ohio State will cap this closing stretch with the Spring Game in the Horseshoe, and it’s also planning to have another scrimmage before then along with a couple more padded practices. So, the end of camp is already in sight for the Buckeyes, and there’s still plenty they want to accomplish before heading into the summer offseason.

Day invited select media outlets back to watch six periods of practice on Monday morning, and Lettermen Row again was fortunate enough to catch a glimpse of the Buckeyes. After two open viewing sessions and a couple more press conferences with the third-year coach, here are some key takeaways about Ohio State heading into this key closing stretch on the practice field. 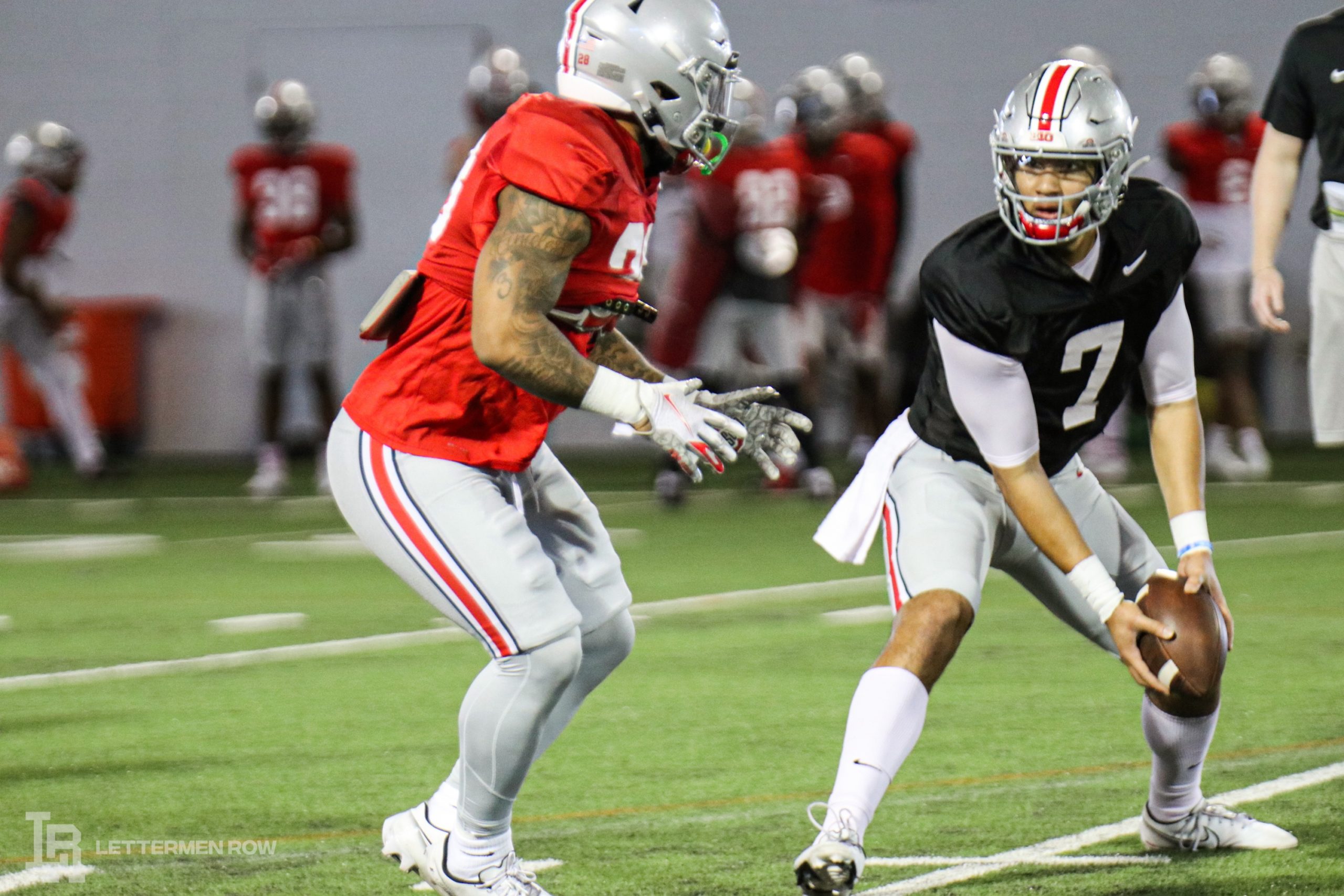 The rotation will continue for snaps, and Ohio State won’t end the competition until it’s completely sure that there is a winner. But if C.J. Stroud was the odds-on favorite to win the quarterback job entering spring, nothing has changed with more than half of the practices officially in the bank. In fact, he has probably only strengthened his position in the battle against Jack Miller and early enrollee Kyle McCord.

The Buckeyes are always patient when it comes to making definitive decisions at the most important spot on the roster, and that surely won’t change now. But Stroud continues to be the first guy in line for reps during drill work, and that order typically isn’t determined haphazardly. Buckeyes coach Ryan Day continues to insist there is no separation between his three candidates at this point, and his vote is obviously the only one that counts. But Stroud appears to be building momentum thanks to a big arm, underrated athleticism and a strong personality — all of which suggest he’s poised to take over for the Buckeyes.

Even with no shortage of talent in the pipeline, the lack of experience at linebacker always made it likely Ohio State would be looking for help in the transfer portal. Just like a year ago at running back, another spring injury might have added to the urgency while also potentially making the Buckeyes an even more attractive destination for an elite target like Tennessee linebacker Henry To’o To’o.

With Dallas Gant out with a foot issue and Mitchell Melton now facing a “long-term injury,” Ohio State spent most of the open periods of practice working out of nickel packages. Both Teradja Mitchell and Cody Simon have the tools to thrive for the Buckeyes with the first-unit, and Craig Young’s versatility in the hybrid Bullet role looks like it simply must be used this season. But none of those guys or the younger options pushing in reserve have played in truly meaningful moments for the Buckeyes, and that unit probably won’t leave spring with the kind of answers it was hoping to find over 15 practices. 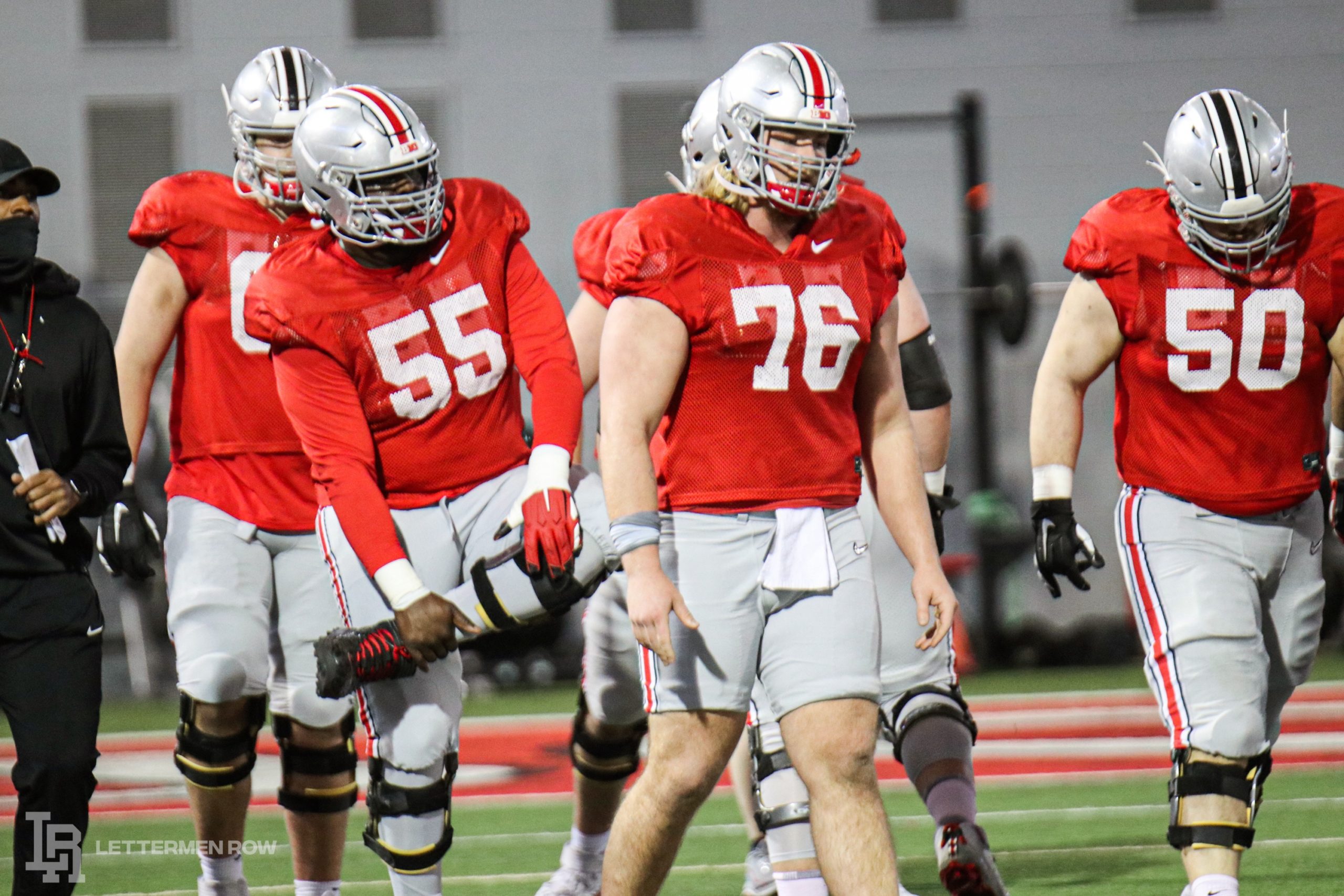 The projected starter at center is on the shelf this spring, and Harry Miller isn’t likely to lose his spot at the job due to injury. But the junior will certainly have a competition on his hands when he returns, because Luke Wypler and Matthew Jones appear to be making the most of the extra reps Miller’s absence has opened up for them.

Wypler looks ready to make a significant jump in his second year with the program, and he appeared to be in line for first-team reps anchoring the offensive line at the end of the open portions of practice. He was flanked on the left side by Josh Fryar, another young blocker who has capitalized on the snaps afforded to him at this point in camp. Ohio State hasn’t had as much depth, versatility or high-end talent up front in years, so nothing is guaranteed for any of those guys moving forward — especially since Miller will eventually be back and Dawand Jones is also solidly in the mix. But there are two young Buckeyes turning heads for that unit, and they’ll need to be monitored heading into August.

Coming off one of the worst statistical pass-defense seasons in school history, Ohio State would obviously want to be at full strength in the secondary. That was never going to happen with Cameron Brown still rehabbing from his injury last season, Kourt Williams not fully recovered and Sevyn Banks now limited as well. But those issues have opened up key developmental opportunities for younger guys, and Ryan Watts might wind up being the biggest beneficiary of those spring snaps.

The rangy, long-armed Watts has the kind of frame that Kerry Coombs has always sought at cornerback. And with what seems to have been a productive winter conditioning period in the weight room, Watts is flashing as a potential candidate to make a major jump into the lineup in the secondary. For now, there’s little choice but for Ohio State to lean on him to get through spring. But if Watts continues to make the most of those chances to grow, the sky is the limit for somebody with his physical skills.