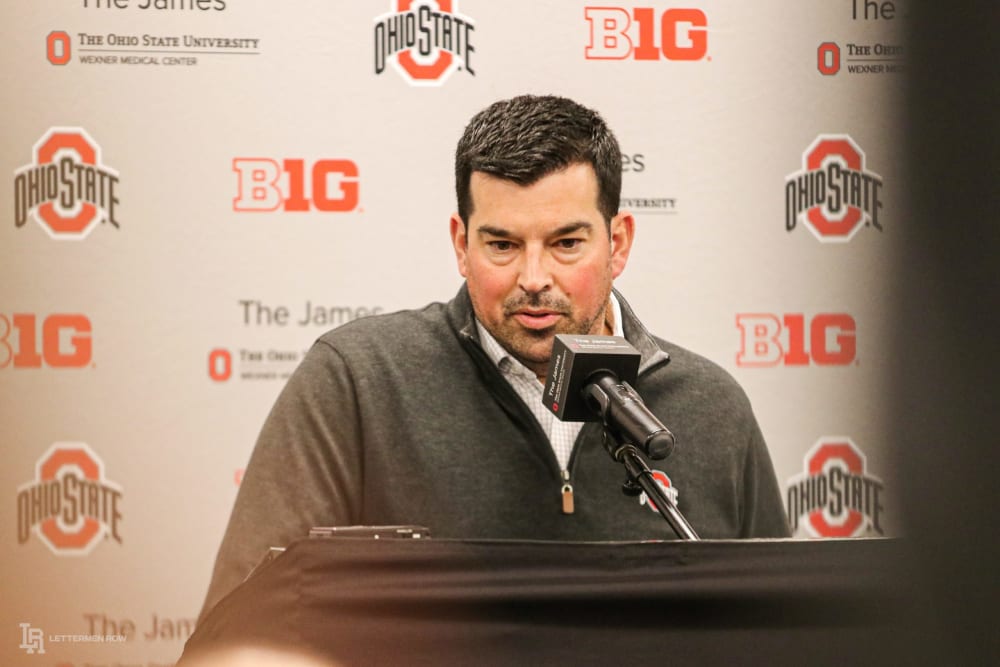 COLUMBUS — There was no drama at Ohio State.

The days of getting up early, waiting by the fax machine and hoping everything works out on the first Wednesday in February are long gone for most programs in college football — but that was even more true for the Buckeyes.

The slightly revamped coaching staff at the Woody Hayes Athletic Center only needed one signature to arrive, and Cameron Martinez had already assured them it was coming last week. There was still an afternoon celebration planned to celebrate all the work that went into landing the decorated Class of 2020, but with the work for the future essentially done for the moment, that instead allowed them to focus on offseason workouts with the current roster and a healthy bunch of early enrollees.

“Signing day is very different now than it used to be,” Buckeyes coach Ryan Day said. “We were just laughing about it as coaches. We had one guy sign today, which is just — the landscape of recruiting has changed a lot.

“I just think based on how many guys want to come at mid-year, I think that’s important. And I think that’s the trend. Although, we don’t really prefer it one way or the other. If somebody feels like they want to be here for their senior year we don’t put any pressure on them. That’s their decision. But we also see the benefit of it. And being here and going through these mat drills and going through spring practice and being here for six months before you start preseason camp certainly helps. And so the more those situations that we can have, the more those guys will have an opportunity to play. And as that is the trend, then we want to be on the front end of it.”

The Buckeyes have been right from the start since that rule changed a few years ago, and the results were once again hard to ignore with 14 true freshmen on the practice field on Wednesday morning to meet with the media instead of scattered around the country at their high schools announcing where they were headed. The recruiting calendar may still have some flaws, but Ohio State has found a way to thrive even in the December time crunch leading up to the early signing period — and that’s now given the three-time defending Big Ten champs a leg up heading into next season.

Thanks to the scaled-back festivities and after introducing the early enrollees, Day was also able to put a spotlight on the return of Kerry Coombs to the coaching staff and the promotion of new quarterbacks coach Corey Dennis. After those interview sessions, here’s what Lettermen Row learned about the Buckeyes from the coaching staff.

(EDITOR’S NOTE: What We Learned from the newcomers to the program is on the way as well and will be posted on Thursday morning at Lettermen Row. As always, all video interviews with the coaches and players are already available on our YouTube channel.)

Kerry Coombs left no doubt about two things in his first press conference since returning as the coordinator for the Buckeyes.

First, he made the best decision for him when he left to go coach with Mike Vrabel in the NFL and loved every minute of it. And second, he couldn’t be happier to be back at Ohio State.

“I love Ohio State,” Coombs said. “I don’t want to understate this, and I missed it. I missed the development of the player. I missed the development of the player — and we were still able to develop players at Tennessee, those players are better I think than they were when we got there. OK, so I don’t think you stopped developing. I don’t think guys getting the NFL and quit getting better. I really don’t. But I love, love recruiting. I love going into high schools and talking with high school coaches. I love meeting players when they’re 16, 17, 18 years old and seeing that transition from a boy to a man. I love being behind the stage on a draft night and seeing a kid realize his dreams. I love coming out of that tunnel on a Saturday afternoon.

From the moment he picked Ryan Day up at the airport to the time he was officially tabbed as the next quarterbacks coach for the Buckeyes, every day was essentially a job interview for Corey Dennis.

His audition was so successful, it nearly had the new quarterbacks coach heading out the door for a job he had effectively accepted at Colorado State. But instead, the departure of Mike Yurcich allowed Dennis to go home and tell his family that they were getting to stick around at Ohio State, and he has plenty of first-hand experience working with Day and the rest of the offensive staff to validate his selection and ignore any suggestions he hasn’t earned his spot.

“You really have to dive into it and get your feet wet until you know [for sure],” Dennis said. “But obviously the trust that Coach Day has in me, the fact that there’s a lot of people that believe in me, that’s ultimately given me the confidence to be ready to go.

“Ultimately, I’ve just tried to be a sponge. Whatever Coach Day taught and whatever he did, I tried to take that in myself. But with coaching, you can’t be someone else. You have to be yourself, and I feel like I’ve kind of taken the things that I’ve learned from Coach Day, [co-offensive coordinator] Kevin Wilson and put my own spin on it to be myself.”

Cameron Martinez had the Signing Day spotlight all to himself as the last member of the class, so the scouting reports were a little more detailed on the dynamic athlete from Michigan.

But that doesn’t mean there is really any more clarity about the future for the four-star who can play multiple positions on both sides of the football. And Ohio State is going to let him experiment on both offense and defense when he arrives over the summer ahead of his first training camp — even if his eventual home seems most likely to be in the secondary.

“You saw what he did in his highlight film when he was a running back,” Day said. “He has the ability to do that. We’ll start him at that H-back who can come into the backfield and take some handoffs. And who knows? That’s what’s exciting about him. I think he does have the ability or he could go play nickel or go play corner.

“We’ll give him an opportunity to play on either side of the ball when he first gets in, which is unique, but this is somebody who played quarterback in high school, very, very productive and doesn’t have a lot of experience playing any other position. So we’re going to allow him to do both when he gets here, do some returning and kind of figure out where that goes. And we’re excited about that because we think he’s really competitive. I think he’s one of the most under-recruited kids in the entire country. Really excited for he and his family to be joining us.”

Listening to Kerry Coombs makes me want to run through a wall.

No doubt, I am totally amped after listening to Kerry Coombs.