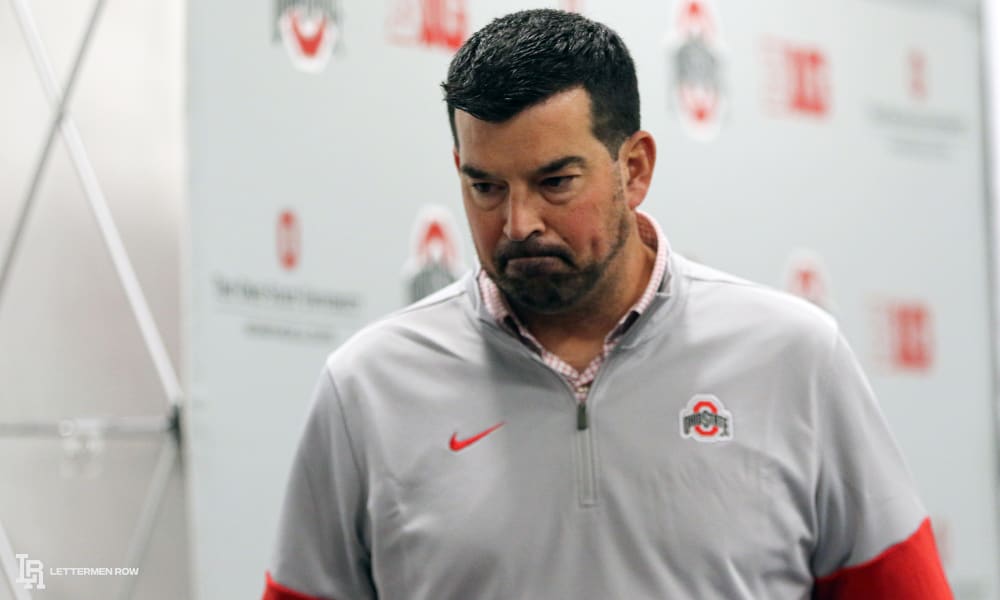 COLUMBUS — The routine is getting shaken up at Ohio State, the next opponent has been dreadful and there’s a huge showdown looming on deck.

A real test for the every-week-is-a-different-season approach the Buckeyes have adopted has arrived.

Certainly a program that has tripped up against Big Ten West Division teams on the road in each of the last two seasons doesn’t need a history lesson on the importance of taking nothing for granted. But that doesn’t mean it’s easy to just keep the focus on a struggling Northwestern team when the Buckeyes know that No. 6 Wisconsin is waiting after that for a massive noon game in the Horseshoe next week.

“It’s the same thing that we’ve been talking about all along, which is all you’re worried about is this game right here,” Ohio State coach Ryan Day said. “We all know what happens if you start to lose focus, and we cannot do that. So this week we’ve talked about having a wipe-out mentality, which is a mentality that you’re starting right from scratch and that you don’t take anything for granted, you don’t make any assumptions, and if we do that, then we’ll be fine.

“If we start to look ahead or start to let our egos get in the way, then we’re in trouble.”

The Buckeyes have obviously managed them just fine during the six-game winning streak to open the season. But the biggest potential distraction of the season is now looming, and this week will provide a unique challenge regardless of the expected level of competition on Friday night at Northwestern.

As the preparation ramps up for the Buckeyes as they get ready to take on the Wildcats, here’s what Lettermen Row learned from the program’s weekly press conference with Ryan Day, Jeff Hafley and a handful of players.

The official availability report won’t be released until Thursday, so the health report is always subject to change until a full week of practice is in the bank. But Ohio State is expected to keep getting closer to full strength now that it’s had an off date to rest and recover, and there were no indications from Day on Monday that anybody who appeared banged up in the physical battle with Michigan State is dealing with any lingering injuries.

“A couple weeks to kind of heal up, and I think overall we are [healthy],” Day said. “We’ve played some depth this first six games, and so we’ve got a lot of guys out there, which is great, too. So, we do have some depth at the positions.

“Like any team, six, seven weeks into the season, there are some different things, nagging injuries here and there, but overall we’ve been pretty healthy.”

The Buckeyes will still be keeping an eye on defensive end Tyler Friday after he missed the win over Michigan State, and there is also some optimism at this point that cornerback Damon Arnette will return after missing the second half of that game. Backup linebacker and special-teams contributor Teradja Mitchell has been dealing with what Lettermen Row was told is a hamstring injury, and the off date also came at a good time for the talented sophomore.

Ohio State survived just fine with Damon Arnette out with an injury for a half two weeks ago, and co-defensive coordinator Jeff Hafley is clearly confident his secondary could manage it for even longer if it needed to down the stretch. The preference, of course, is to get the senior back on the field and let Arnette keep rewriting his legacy with the program. But thanks to the versatility of Shaun Wade and the improvements of Cameron Brown, the Buckeyes have a couple options at cornerback just in case the need arises there again.

“It’s never easy to just come into the game from the bench and play as many snaps as [Brown] did,” Hafley said. “I think he did a really good job. I think Cam is a guy who works really hard, and he might even one who has improved the most out of all the guys from the time that we got here until now.

“I’m very comfortable with those guys. They work hard, they do whatever we ask them to do — and whoever we put on the field, I have a lot of confidence in them.”

The toughest part for Josh Myers was coming to terms a year ago with the fact that he wasn’t ready to be the center for the Buckeyes. That clearly isn’t a problem for him now as he’s emerging as a key cog for one of the best offenses in the country, but that hard self-evaluation was an important part of his development process.

It’s still ongoing for Myers as he gets more familiar every week with the heavy dose of responsibilities on his plate in the middle of the line. But now with half of the regular season under his belt, Myers is becoming the kind of impact player he always envisioned — even with more room to grow.

“It’s significant,” Myers said. “I was comfortable and confident going into Week One, I would say, but there were still a lot of questions I hadn’t answered for myself yet. I’m just a lot more comfortable now having that experience in the first half of the season.”

Jonathon Cooper rests up, ready for second half

After missing the first four games of the season, it’s possible that Jonathon Cooper didn’t really want the week off after just returning to action for Ohio State at defensive end. The senior captain probably needed another chance to get off his feet and rest his high-ankle sprain after making his first two appearances of the year — particularly because that injury continues to linger for the pass-rusher.

Cooper isn’t expected to miss any additional time with that issue moving forward. That doesn’t mean the pain is completely in his rearview mirror, but the Buckeyes can increasingly start expecting him to contribute more after chipping in a tackle and one key pressure during his first couple games back in the lineup.