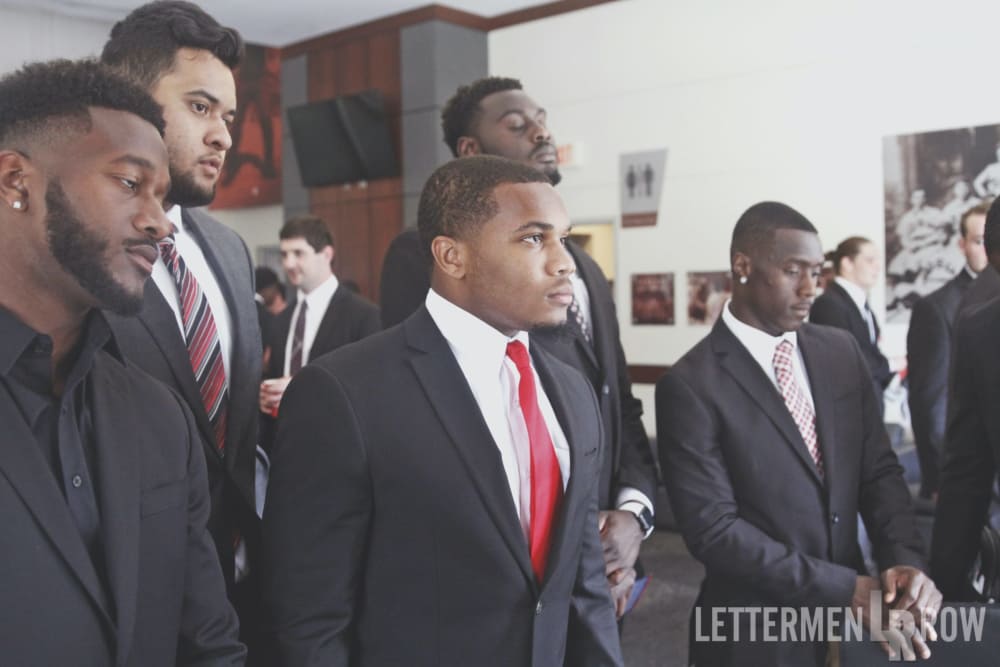 Ohio State has plenty to sell right now, but it's current players who seem to be tipping the scales. (Birm/Lettermen Row)

COLUMBUS — Trying to pin down just one reason for this ridiculous success Ohio State has been enjoying on the recruiting trail is foolish.

Right now, the Buckeyes have seemingly everything they could possibly need to pitch the nation’s best players to sign with the program and keep competing for championships every year.

But maybe lost in all the focus on the NFL Draft, or pipeline programs, or the value of Real Life Wednesdays, or the praise for some of the country’s most influential recruiters and the presence of Urban Meyer are the guys who seem to really be making the biggest difference lately for Ohio State.

Perhaps the single most important reason the Buckeyes put together such an historic class in 2018 and are picking up commitments for the next two years seemingly every hour this week? Elite players want to be surrounded by others on their level, which makes the current roster arguably the best selling point that hardly gets mentioned.

“The best recruiters are our players,” running backs coach Tony Alford said this spring. “They’re the best ones we’ve got. We get a young man to come on campus, he sits with our players and they start talking to one another. The recruit thinks, ‘Yeah, I think this would be good for me, too. I like the guys in the room and who I’m going to be with and rubbing elbows with and hanging out with and who I can learn from.’ 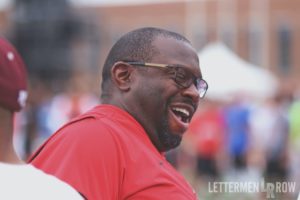 Running backs coach Tony Alford has plenty to work with at Ohio State — and more talent on the way. (Birm/Lettermen Row)

So for an assistant like Alford at this point, he’s practically offering an endless buffet to some of the hungriest recruits in the country. The tradition of the running back position is obviously rich at Ohio State, and the meeting room is decorated with pictures of some all-time greats through the years. But the chance to come compete with, learn from and build a relationship with guys like Mike Weber and J.K. Dobbins is what can really push a team over the top with recruits.

And for the Buckeyes, that clearly isn’t just the case at one position.

There’s Nick Bosa and Chase Young with the defensive linemen, making the Rushmen even more attractive than just the chance to play for revered position coach Larry Johnson.

The culture among the wide receivers provides one of the most unique, strongest bonds that can be found anywhere in college football. Is it any wonder that 5-star Garrett Wilson wanted an opportunity to pledge to Zone 6?

And, of course, nowhere is the combination of an NFL springboard and a roster loaded with high-end talent more evident than at cornerback, where chasing high-end talent while cranking out a first-round draft pick year after year has become almost a self-fulfilling prophecy.

“Big time,” new cornerbacks coach Taver Johnson said this spring. “That’s the thing about the Ohio State University. You go right in our meeting room, we have [graphics] up of all of those guys from [Gareon] Conley to [Marshon] Lattimore to Malcolm Jenkins to Vinnie Clark to Shawn Springs. It can go on-and-on, and those guys understand the expectation and they see those guys come back. 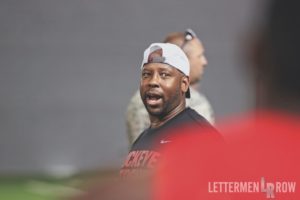 “They just don’t see them once they leave in the draft and on Sundays. Those guys come back, and they work with those guys, they talk to them, they have them understand the expectation that everyone has to live up to, especially myself. Having that right in front of us, that makes us go to work.”

In recruiting, that job never really ends for Ohio State.

But it’s hardly ever produced anything resembling the kind of results the program is getting now.

“Watch,” Alford said. “I’m not trying to be facetious. Watch. We’ve had really good success prior to me being here, too, with Carlos Hyde and then [Ezekiel Elliott] and then Mike and then J.K. The list goes on and on

“I’ve been fortunate to work with some really high-quality young men as people and as players. I’ve been blessed that way. Hopefully, it’ll continue.”

At this point, it’s hard to imagine what could possibly slow it down.