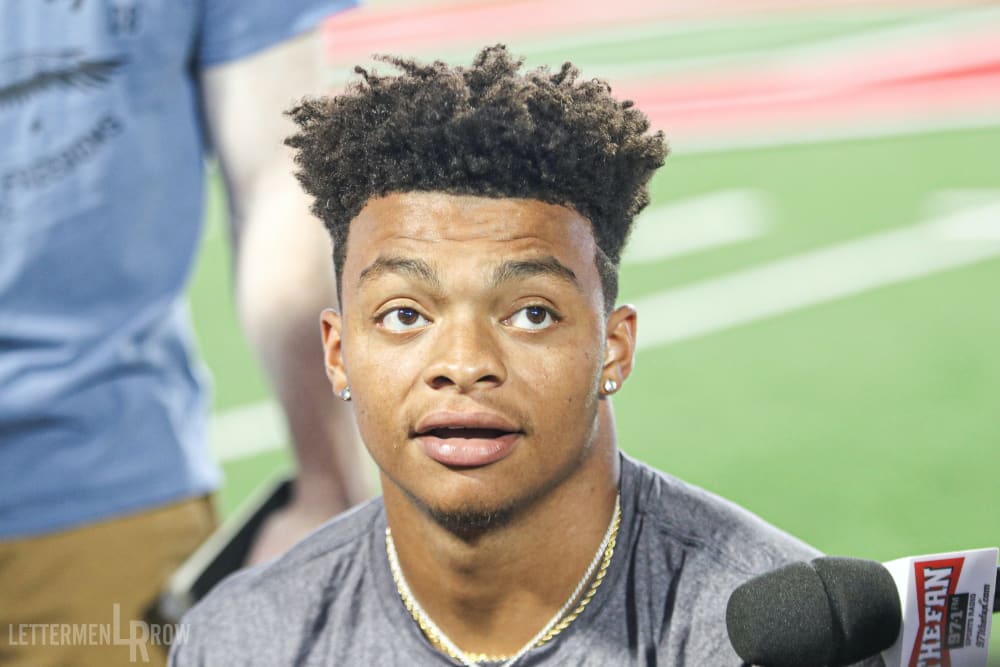 He’s still battling with fellow transfer quarterback Gunnar Hoak for the starting job that coach Ryan Day wants to hand out in the next couple weeks of training camp. The job is still, technically, up in the air.

Yes, Fields is expected to be the starting quarterback when Ohio State plays Florida Atlantic on Aug. 31. Although that job isn’t his yet, he’s beginning to demand respect as a leader of the offense.

Fields ability has never been in question; the former 5-star recruit is the highest-rated player to ever commit to Ohio State. He’s shown flashes of brilliance and even informed the media of his 4.38 hand-timed 40-yard dash over the summer. But the leadership aspect of his game is beginning to show as Fields becomes comfortable with Ohio State’s offense.

“You have to get used to the guys and just kind of build relationships with them so they trust you, and then you can step out and become a leader,” Fields said. “That’s what I did, and I feel like I’m becoming more of a leader every day. Like today before team period, we weren’t having the best practice like we did yesterday.

“We weren’t as good, so I got all the guys together and was like, ‘Yo, we need to pick it up.’ I’m just trying to become that leader of the offense.”

Fields is still cementing himself as the starting quarterback, but he’s not the only one battling during training camp. Here’s what Lettermen Row learned from the Sunday interview sessions with the quarterbacks and coaches.

This isn’t just Justin Fields and Gunnar Hoak’s first fall camp at Ohio State. Mike Yurcich is working through the process of his first camp with the Buckeyes as well, learning his quarterback room. As the quarterbacks coach makes his way through the first few practices, he seemed to be in no hurry to point out if Fields or Hoak has the upper hand as of Sunday.

“After we get into it for a couple weeks and we’re able to put some live scrimmages together and try to simulate the game as much as possible, we’ll have a better feel for what that timeline is and who that’s going to be,” Yurcich said.

While that process of naming a starter isn’t close to finished, Yurcich did dive into what Fields has improved on since the spring, particularly his anticipation of throws and his leadership.

Fields is the odds-on favorite to win the job, and he has been since he announced his intentions to transfer to Ohio State. But Gunnar Hoak’s not going away, nor will be back down from the competition with Fields. Hoak spoke about his Ohio State memories after practice, cheering for the Buckeyes and watching games in Ohio Stadium.

He knows the tradition of the program, and he wants to compete for the starting job. He knows most expect Fields to start. Hoak just keeps working, though

“You’ve got to come in and compete,” Hoak said. “You can’t come in here and have the attitude that you’re going to sit back and let somebody else take it. So you have to come in with a good attitude, good mindset and everything.”

As Chris Chugunov begins his second season at Ohio State, he’s the only quarterback on the roster who had Day as a position coach. Chugunov has seen Quarterbacks Coach Day and Head Coach Day. None of the other two quarterbacks — Fields and Hoak — were here to learn from Day as a quarterback guru.

Chugunov can see how things have changed.

“[Day is] still very involved in what we do,” Chugunov said. “Coach Yurcich has been here now since this winter, and we’ve been working hard together to improve and get ready for Week 1. It’s been good.”

Although Yurcich and Day are similar in their approach to quarterback play, Chugunov has drawn some new tips from Yurcich this season, particularly when it comes to the system and how to play in it.

Urban Meyer was always known to be an active special teams coach, and the importance of the kicking game hasn’t went away under Ryan Day. As Day hired Matt Barnes to handle special teams duties, Day remains active in coaching the kickoff team, and Barnes is getting a good start on the other aspects.

As the special teams units come together, Terry McLaurin will be missed as part of the Ohio State punt team. Punter Drue Chrisman admitted it was nice to have McLaurin there to down his punts and be an ace gunner, but Ohio State has guys to replace him. One special teams hopeful who Barnes listed as a standout was true freshman running back Marcus Crowley. As J.K. Dobbins racks up carries on offense, Crowley could find himself in a key special teams role.