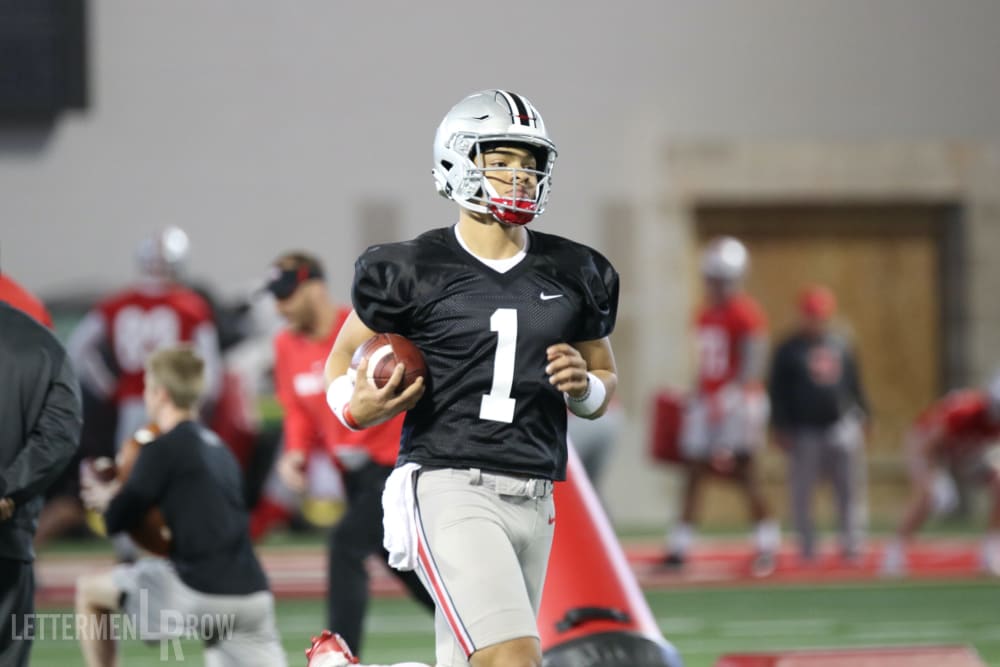 Ohio State quarterback Justin Fields made his practice debut on Wednesday for the Buckeyes. (Birm/Lettermen Row)

COLUMBUS — No matter how long the competition winds up lasting, this is only the beginning at Ohio State.

The Buckeyes have completed just two workouts of spring practice, with 13 more on the way and the possibility that the program might go through summer and into training camp before making a final decision at the most important position on the field.

But there are still some lessons to be learned even with a small sample size as Ryan Day begins accumulating information to pick his first starting quarterback as the coach of the Buckeyes. Justin Fields has been taking the first snaps, Matthew Baldwin has shown off a big arm, Chris Chugunov is preparing in case an opportunity arises — and Ohio State doesn’t appear to be in any hurry to name the successor to Dwayne Haskins.

“I don’t really have a preference,” Day said after the first practice. “For us, the more competition, the better. Any time you have competition, it’s healthy.

“I don’t think [naming a depth chart] needs to be done right off the bat. The guys are going to get their reps, they’re going to go and you just don’t know how it’s going to play out. … Getting to that first game is a long journey.”

The Buckeyes have taken their first steps on the path to the opener now. And here is what Lettermen Row has learned about the quarterbacks in the early stages of spring.

The competition at Ohio State is legit

Justin Fields was tabbed as the favorite heading into March with good reason. He’s the most decorated recruit in school history, he has dynamic ability as a dual-threat weapon and the Georgia transfer probably wouldn’t be on campus now if he didn’t see a path to starting right away. But perhaps the buzz about Fields and the early betting odds that have him as a Heisman Trophy candidate are overshadowing the fact that Matthew Baldwin is a legitimate option to be the guy for the Buckeyes. He might be perceived as the underdog next to Fields, particularly because he’s also inexperienced and coming off a major knee injury that limited him at times during his redshirt season. But Baldwin was a hand-picked passer by Day as well, and he’s got a year of knowledge in the system, a big arm and now a clean bill of health. Ohio State has two solid candidates, and it can take its time evaluating them.

The pads haven’t been on yet, and Ohio State has only been working to install some basic packages on offense at this point — which is especially important for a new guy learning a different playbook. But just based purely on physical ability, it’s easy to see why Fields was so highly rated on the recruiting trail and so coveted by the Buckeyes when the sophomore became available in the transfer portal. Fields is a natural athlete, brings a combination of smooth mobility and a solid arm and carries himself with confidence both on the field and in press conferences. The scheme may look a bit different if Fields winds up winning the gig because he is far more dangerous as a rusher than Haskins, but that realistically won’t require all that many tweaks to the existing playbook.

Whether it was a case of nerves, rust or a combination of both, Matthew Baldwin didn’t leave the strongest first impression during the open portion of practice on Day One. But it didn’t take long for him to bounce back from that uneasiness, and by the time the Buckeyes were done with the viewing window on Friday, there seemed to be a consensus that Baldwin had delivered the most impressive passing performance of the morning. Again, that’s just one practice and a tiny sample size as part of a mountain of data Ohio State is trying to obtain. But Baldwin was spinning the football well, delivering it with accuracy and zip and also showing off a solid deep ball. Essentially, after perhaps feeling a bit of the pressure realizing what he was competing for on Wednesday, by Day Two Baldwin was showing why Day went down to Texas to recruit him.

Somebody always has to take the first snap, and so far that has been Fields. But new quarterback coach Mike Yurcich went out of his way numerous times on Friday to make it clear that it’s far too early to read anything into that, and he also pumped the brakes on any discussions highlighting one of his passers over another.

“I think we need more time before we can start high praise on any of them,” Yurcich said. “And we’re not going to over-evaluate on just a small sample size.

“We’re going to mix the reps up. All the quarterbacks will rotate through. It’s too early on right now to get into any of that, those guys will get their fair share of reps and we’ll create some competition. … All of our quarterbacks have certain traits that make them special.”

The Buckeyes are just scratching the surface with all of them. But the battle to lead the Ohio State offense is officially underway now.