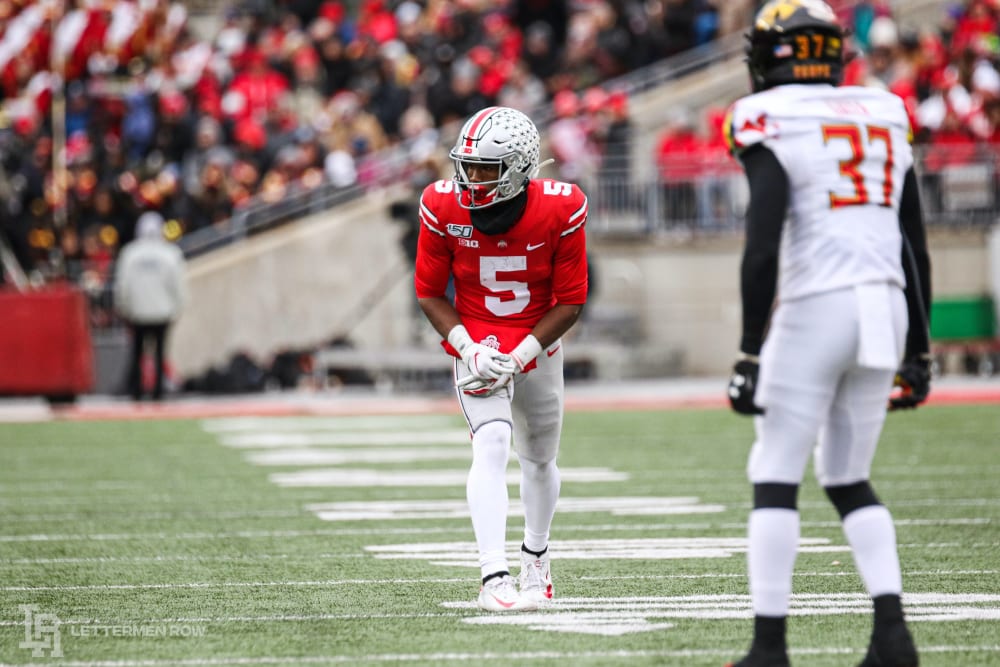 It was with him when he was being recruited by and committed to Ohio State from Austin, Texas. It followed him to spring practice after Wilson enrolled early. And it definitely didn’t slow down after Wilson’s acrobatic catch for a touchdown in the spring game back in April.

All of that was just preseason buzz and talk. Now 13 games into his Ohio State career, the expectations and hype have turned into jarring results that have spoken for why Wilson was so highly regarded for so long by so many. Wilson already has 26 catches for 385 yards and five touchdowns in his short career in Columbus, and that has made enough heads turn to know he’s a superstar in the making.

“Garrett’s still real young, but certainly his talent is off the charts,” Ohio State coach Ryan Day said after the win over Maryland last month. “And so I don’t want to get too far ahead of ourselves with Garrett. But we think he obviously has a tremendous ceiling and he’s growing every week. He’s understanding how to practice. He’s understanding how to play within the offense.

“But I feel like his maturity level, and it’s kind of like Chris Olave came on late in the season last year as a freshman. He’s kind of into that swing right now where he’s got some games under his belt.”

There have been hiccups for the freshman this season, sure. But Wilson had enough game experience to grow and mature just in time for the rivalry game against Michigan, when he caught three passes for 118 yards and a touchdown to help the Buckeyes demolish their rivals on the road. Moments like that are why Wilson chose Ohio State, and his performance on that stage proved how ready he is to take on a challenge as big as the College Football Playoff at such a young age.

Wilson helped himself this season at Ohio State, but the former 5-star recruit isn’t the only one. Lettermen Row is looking back at four other Buckeyes who made a big splash in the first 13 games of the season. 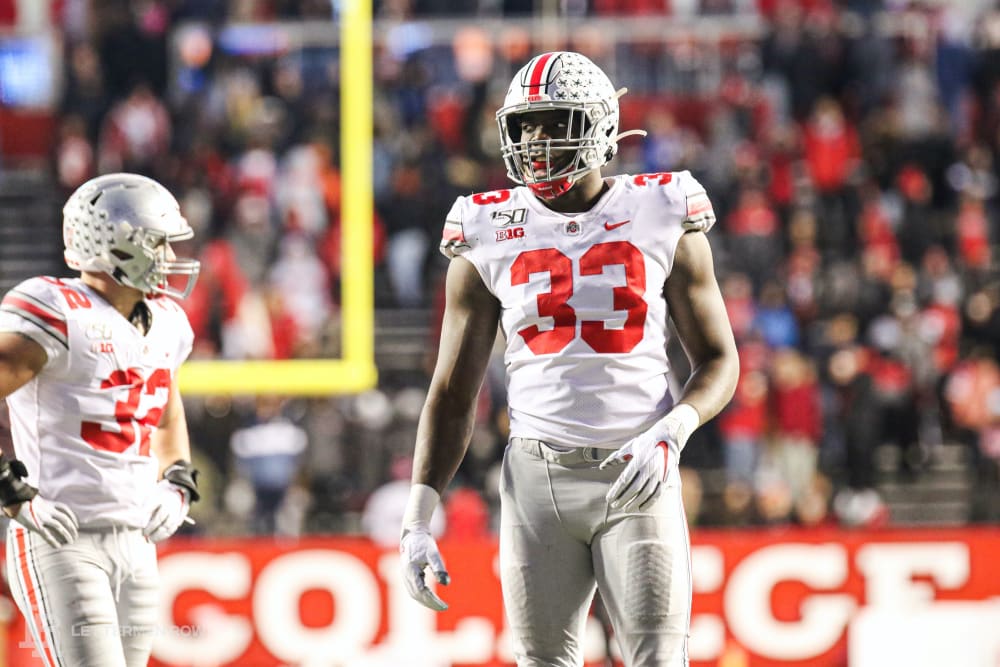 Zach Harrison has been a good piece for the Ohio State defense. (Birm/Lettermen Row)

The other crown jewel of the 2019 recruiting class for Ohio State, Zach Harrison was thought by some to be a raw talent that would need time to find meaningful playing time. That notion changed quickly. Harrison zipped through the learning curve with defensive line coach Larry Johnson and made a statement with a sack against Michigan State in a home night game. That was a flash of his potential, and he only got better as the season went on. When Chase Young was suspended for two games to begin November, Harrison was thrust into a starting role, where he played well. As Young moves on to the NFL next season, the dominance of Ohio State’s defensive line should stay in tact thanks to Harrison and the progress he has made in Year One.

Josh Myers entered the season with massive shoes to fill following the last three full-time centers at Ohio State. With a talented stable of young and old offensive linemen around him, Myers’ stock rose quickly, as he became not only one of the best centers in the country, but also a likely candidate to leave early for the NFL after just one year starting for the Buckeyes. Myers has shown he can pave a path for running backs as a road-grater. He has also shown an ability to be a great signal-caller for blitz pick-ups and protection for a quarterback. In 13 games, Myers has dazzled along the offensive line, and he’s a big reason why the Buckeyes are playing for a national title. 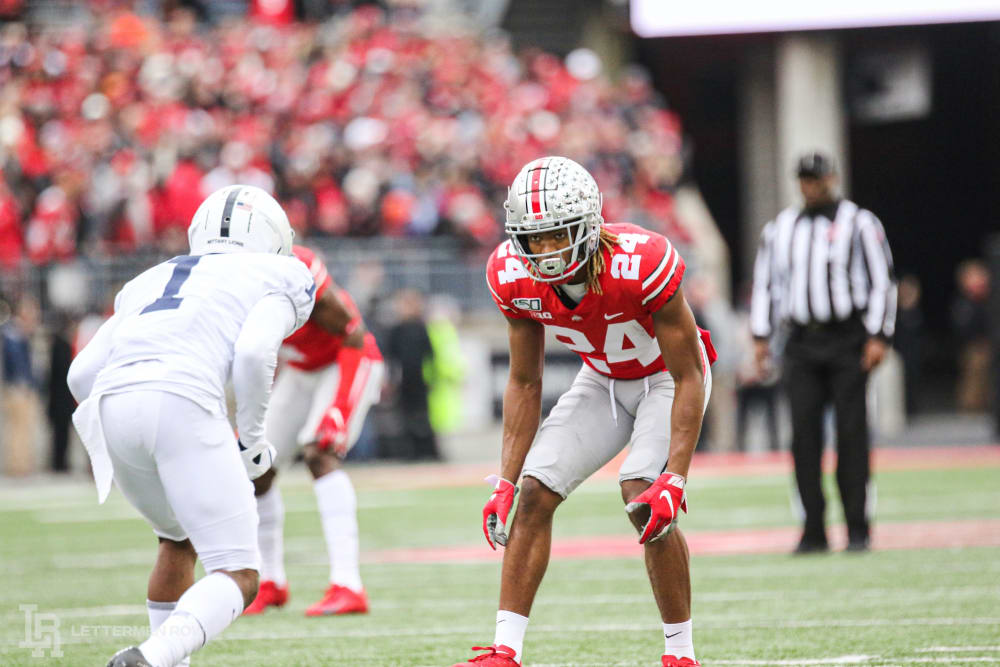 Shaun Wade could be a first round pick in the NFL Draft. (Birm/Lettermen Row)

Shaun Wade entered the season as a versatile cornerback who could possibly play slot corner or the new Bullet position. He will finish the season as one of the most important pieces of the Silver Bullet defense and another underclassmen who has a decision to make regarding his future. Wade has been key for the Buckeyes, and that was proven when he wasn’t on the field in the rivalry game against Michigan. The Wolverines tore apart Ohio State’s secondary in the first half while Wade didn’t play that day due to injury. Ohio State adjusted and played a great second half without Wade, but his absence was certainly felt. His stock did nothing but rise throughout the season.

DaVon Hamilton was thought to be a piece to a rotational defensive tackle spot this season while the defensive ends feasted on quarterbacks. Well, Hamilton has been incredible during his fifth year as a Buckeye, totaling five sacks, 9.5 tackles for loss and a fumble recovery as he has made plenty of noise from the nose tackle spot. Hamilton probably should been an all-conference selection, although he doesn’t even notice the lack of attention he receives. He has quietly had one of the best seasons of any Ohio State defender this season, and while his time in Columbus is almost finished, he still has two games to once again make a huge impact for the Silver Bullets.

Five Questions as Buckeyes get back to work on practice field
WATCH: Ryan Day, Buckeyes return to practice for Fiesta Bowl