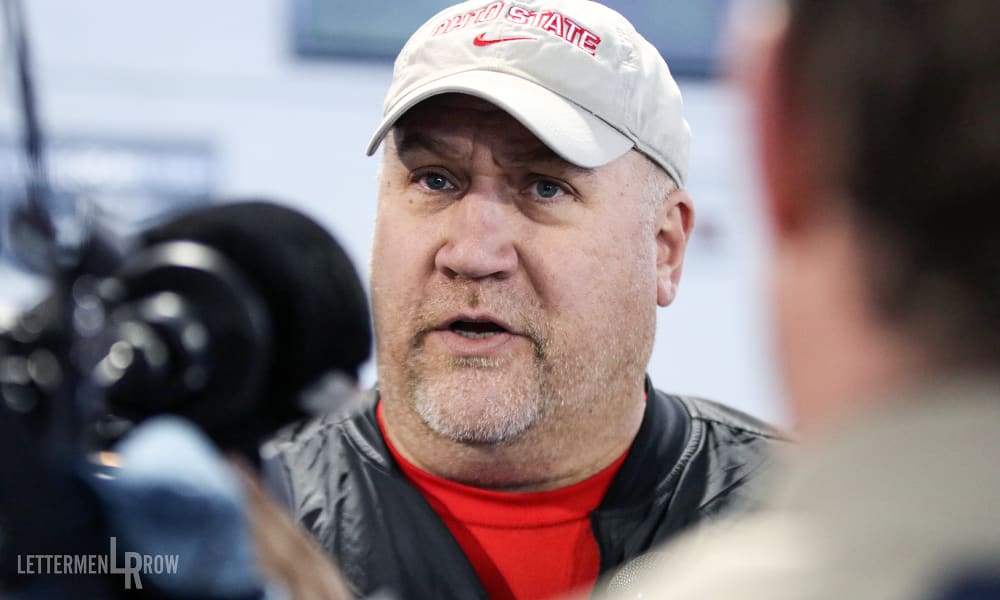 COLUMBUS — Greg Studrawa didn’t have a definitive answer about the Ohio State offensive line, and it was probably never realistic to expect one.

The Buckeyes may be nearing the end of spring camp, but from the moment it opened it was clear that there wouldn’t be an established starting group heading into the summer. Left tackle Thayer Munford was going to miss every practice as he recovered from injury, the projected guard next to him in Jonah Jackson won’t arrive until May and another potential candidate for playing time in freshman Harry Miller is still being FaceTimed into meetings until he finishes high school.

Putting together a depth chart, then, was never really something Studrawa was aiming for by the time camp closes next week with the exhibition in the Horseshoe. But if the unit as a whole couldn’t really take shape, that doesn’t mean there wasn’t plenty to accomplish for each individual part of it.

“First of all, I don’t know how you replace those guys,” Studrawa said. “I’m excited about how the young guys are working right now, their development is coming along really well.

“I like where we’re at right now. Replacing them? Boy, I don’t know, I tell you that’s hard because that was a lot of experience.”

With Munford out, the Buckeyes have been working without a single full-time starter from a year ago during workouts this spring. And while that’s given plenty of reps to guys pushing for more prominent roles, that also comes at the potential expense of building some continuity for the starting group heading into the summer and training camp.

So, what has this spring revealed about the offensive line for the Buckeyes? Here’s what Lettermen Row has learned after spending time with the big guys on Monday heading into the homestretch of camp.

The plan was already in place heading to the Rose Bowl no matter what happened afterward with Michael Jordan’s NFL Draft decision. Ohio State was expecting to build around a new center even if the starter at that critical spot last season returned, and so far Josh Myers has given the program no reason to go back to the drawing board.

“That was a huge worry and a concern for all of us when [Michael Jordan] decided to leave,” Studrawa said. “But now that Josh has stepped in and really taken the bit, he’s doing excellent. He’s making the calls, and really before we practiced and went to the Rose Bowl, I felt confident in that kid. I think something clicked before we left and went out there. Everything about him and the way he carries himself changed. I really think he’s going to be exceptional.”

Josh Myers: Ohio State center on his development and Buckeyes offense
Watch this video on YouTube.

Branden Bowen back in top form for Ohio State

The journey back took a painful detour last season for Branden Bowen, derailing what appeared to be one of the most promising careers on the offensive line for the Buckeyes. After rising into the starting lineup two years ago as a guard before breaking his leg in the middle of that season, Bowen had to deal with complications from that injury last year with a second surgery that seemed to call into question whether Ohio State would ever get him back on track. But the veteran has returned looking better than ever, and he’s now a viable contender to kick back outside where he always envisioned himself playing as a tackle for the Buckeyes.

“It’s pretty natural, because I’ve played tackle throughout my time here on and off. In camp in 2017, I was actually playing left tackle because Jamarco Jones was sick, so I’ve always been playing there throughout my career.”

Branden Bowen: Ohio State lineman on rehab, becoming a father and his role on Buckeyes offensive lin
Watch this video on YouTube.

Tackle competition heating up for Buckeyes

As productive as Bowen has been throughout spring, that still doesn’t assure him of anything in one of the most fascinating, heated competitions on the roster. When Munford returns, he’ll slot back into his role at left tackle. But that leaves three talented options vying for the one starting position on the right side, with Bowen, Nicholas Petit-Frere and Joshua Alabi all fighting for that spot. Bowen’s comeback story, Petit-Frere’s emergence as a five-star recruit and Alabi’s methodical improvement into a guy capable of starting in the Rose Bowl all make for ready-made storylines — plus, it’s a critical job on the line.

“It’s a great competition,” Petit-Frere said. “[Bowen] is a great player, and I have learned a lot from him, too. At the end of the day, we’re all here just to make sure we get each other better so we can find a way to win some games. He’s been teaching me a lot, he’s a great athlete, came back off the injury last fall and he’s been performing really well.”

Nicholas Petit Frere: Buckeyes tackle on his big spring and how he's packing on the pounds
Watch this video on YouTube.

With some key components of the roster not even around, Ohio State has been forced to get a little creative in an effort to make sure the offensive linemen expected to contribute this fall can still get a head start during the spring. For guys like five-star recruit Harry Miller and graduate transfer Jonah Jackson, that has meant connecting into meetings via FaceTime to watch film, listen to Studrawa’s teaching points and go over the playbook — sometimes even when Miller is out of the country.

“He watches everything we do,” Studrawa said. “Every time we meet, those guys are on FaceTime video watching it. He watches all the film, we talk on the phone or talk on FaceTime and we go over it. When he gets here and hits the ground running, he knows exactly what to do.”

While the guys set to arrive in the summer might dominate the attention, Ohio State can’t afford to just sit around and wait for Jackson or Miller to start the competition. Somebody was going to get the benefit of those reps at guard this spring, and Gavin Cupp is clearly making the most of his long-awaited opportunity to work with the first team and potentially stake his claim to a spot in the rotation. Entering his third year in the program, Cupp has had time to develop his body, learn the offense and work through some of the growing pains that happen on the offensive line. And this experience might help him take a big step forward into becoming a contributor.

“Just trying to improve this spring,” Cupp said. “There’s a lot of time until we kick off that ball. I want to be the best me that I can be going into summer camp. Just continue working.

“It does get hard for everybody in this program, it gets to the point where it’s tough and you’re just working, working, working. But I think for me, I’m just glad to have the opportunity that I have right now.”