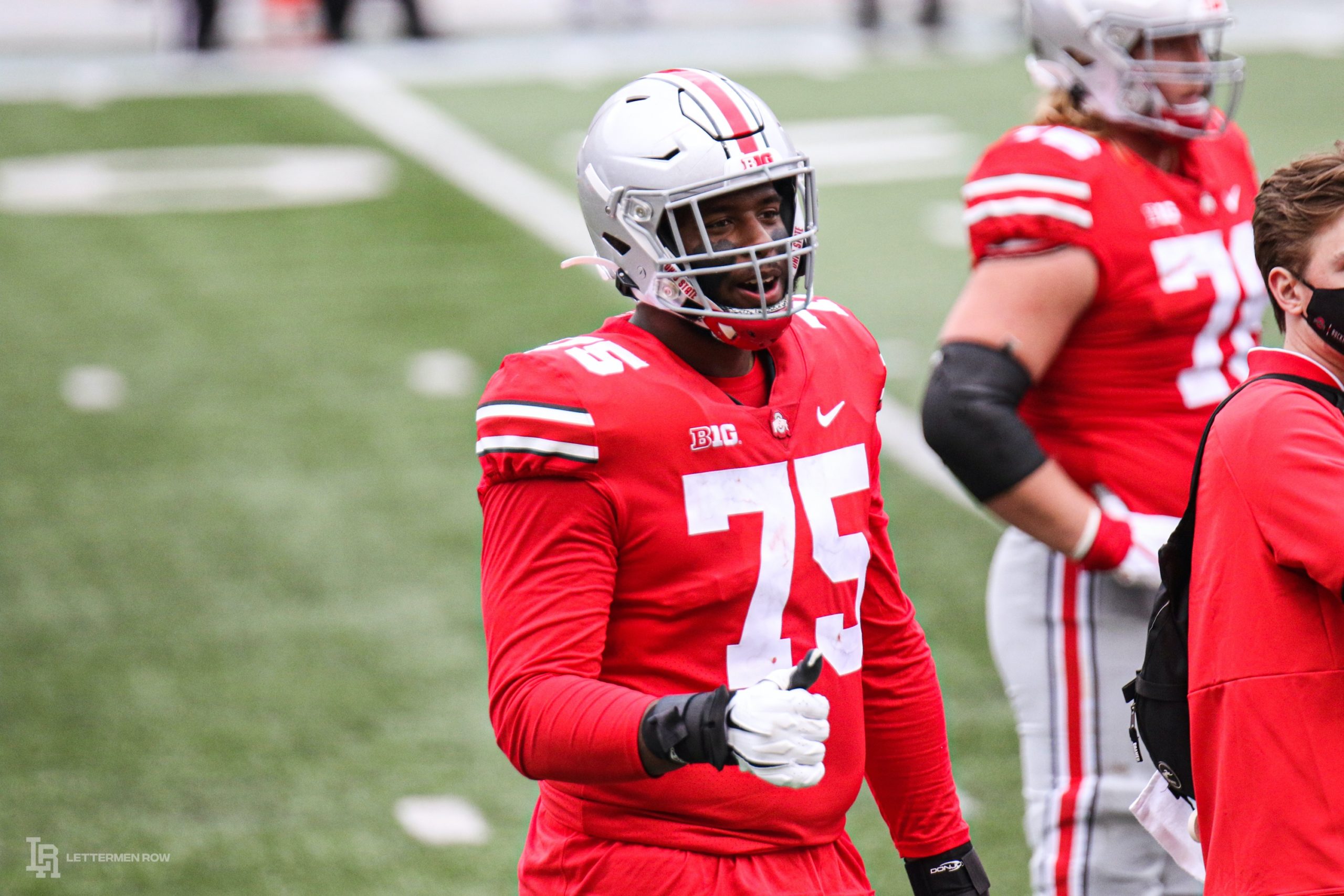 COLUMBUS — Once upon a time in a period before the pandemic, this year’s Ohio State team was going to play road games in two of the louder venues in the country, Oregon’s Autzen Stadium and Penn State’s Beaver Stadium.

Alas, the trip to Oregon was cancelled when the Big Ten opted to move to an intra-conference schedule. The trip to Penn State is still on for Saturday night, but it’s not going to be the same. Due to league games being sans fans, except for families of players and staff, and with artificial noise restricted to 70 decibels between plays and a maximum of 90 for big plays, Penn State’s infamous White Out will be a mere whisper of itself this time around.

The youngsters among the Buckeyes who weren’t on the team two years ago when Ohio State last made a trip to Beaver Stadium, and that includes quarterback Justin Fields, will be missing out on a true trick-or-treat special.

“Some of those guys won’t even know what it’s like to play in that stadium during a White Out,” former Ohio State receiver Johnnie Dixon told Lettermen Row, referring to a din that in the past has reached 122 decibels or more. “They don’t really have much to worry about [without it].”

“Some of the older guys who have played over there, it’s going to be definitely weird for them because when you play over there in that White Out, you can’t hear the person right next to you talking.” 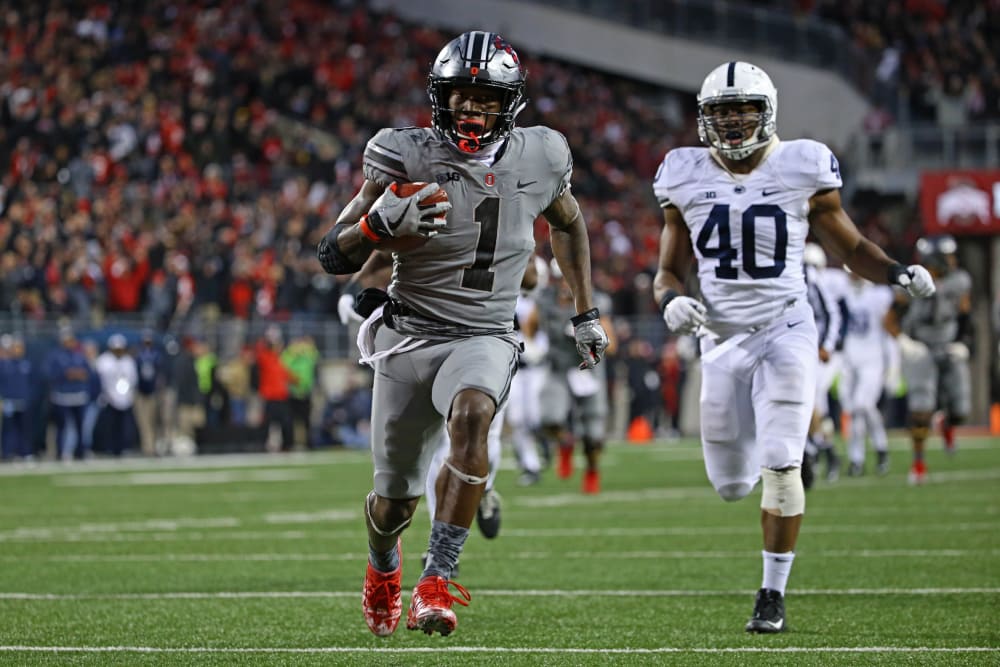 The silver lining for, say, Ohio State’s offensive linemen, is they will be able to hear each other. Forget hand signals, nods or other gyrations they’ve had to use in the past to make blocking-scheme checks at the line. Calls from center Josh Myers should be clear to all before the snap, for example, and the amendments from Fields to such calls from his vantage point behind the line should be clear, too.

“Of course, the quarterback trumps what the offensive line says, because I can see more up the field and kind of of the whole field because they’re in that three-point stance,” Fields said.

In the season-opener against Nebraska last week, the Ohio State line featuring three veterans in Myers, left tackle Thayer Munford and right guard Wyatt Davis and two new starters in right tackle Nicholas Petit-Frere and left guard Harry Miller, seemed to get better as the eventual 52-17 win progressed. There were a few moments, though, when blitzes penetrated or looping stunts by the Huskers defensive front caught the line out of place to counter, resulting in hits or pressures on Fields.

And that was while the fake crowd noise was at no more than 90 decibels.

“Communication is obviously huge, especially for offensive line play,” Petit-Frere said. “That’s a big point we’ve had for this week, working on stunts and stuff like that, just trying to fix anything incorrect we had [in the opener].” 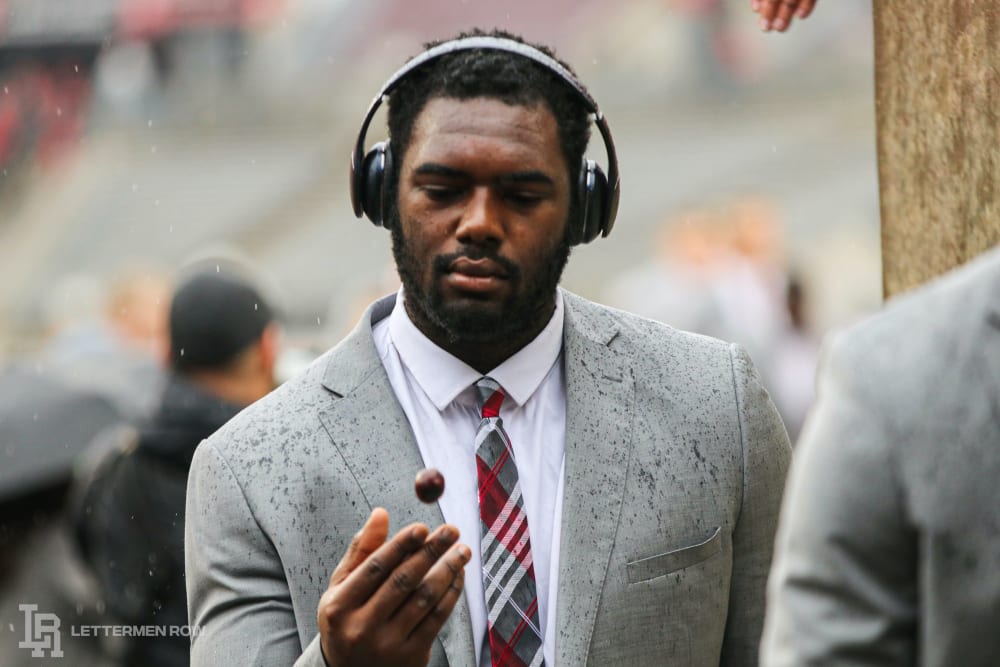 Penn State promises to provide several pop quizzes Saturday night. Even though the Nittany Lions are smarting, coming off the stunning overtime loss at Indiana last week, the Penn State defense is a cut above Nebraska.

“They’re a very talented team, with a great defensive end [Shaka Toney] and great defensive linemen overall,” Petit-Frere said. “They’re very active with their blitzes and stunts and stuff like that. We’ve been watching film from their Indiana game and games we’ve had with them prior, so we’re prepared for anything, whether they stunt or they don’t stunt, the types of blitzes they may run.”

Thus the calls Myers makes up front will be key, as will the checks Fields might make just before the snap. They appeared to talk things over from a coordination standpoint several times during the game last week.

“Me and Josh’s communication is basically just making sure we’re on the same page,” Fields said. “That’s why we talk and communicate off the field.

“But basically his job is to set the ID [of the front], and my role is to trump anything I see. So, if I see some sort of rotation or if I see maybe a look that they’ve given the week before or maybe last year that [indicates] a certain blitz is coming, I’m able to shift the protection somewhere else.”

That should be much easier said and done this time in Beaver Stadium. The huge place just won’t be the same without the deafening din.

“I think it hurts [Penn State] more than anything,” Dixon said. “They’re not going to be used to it being quiet over in their stadium, so I think we’ll be good.”