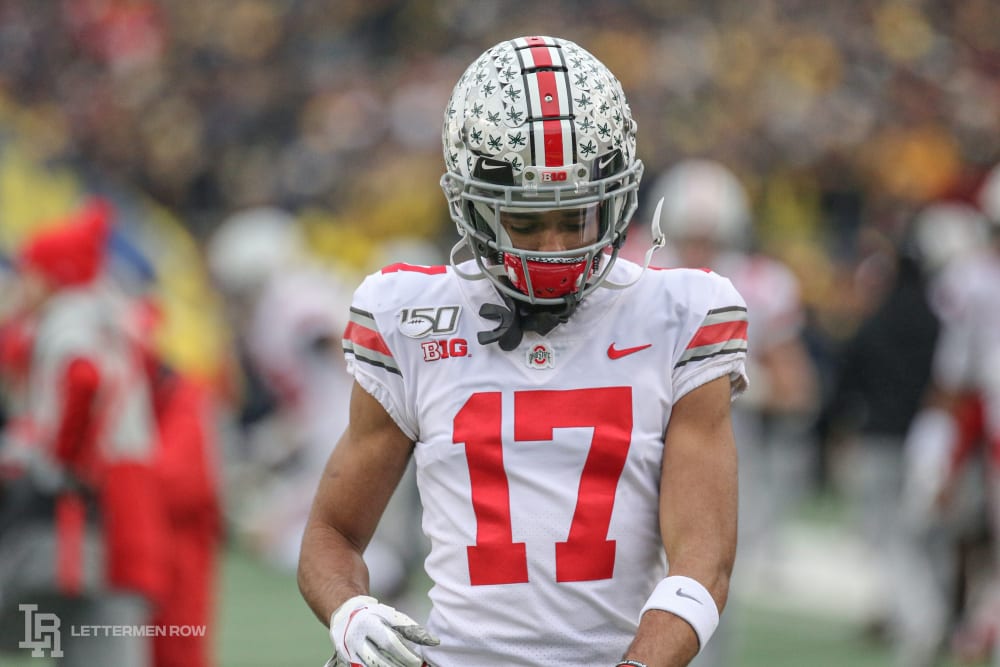 The speculation, debate and conversations about Ohio State never end, and Lettermen Row is always ready to dive into the discussions. All week long, senior writer Austin Ward will field topics about the Buckeyes submitted by readers and break down anything that’s on the minds of the Best Damn Fans in the Land. Have a question that needs to be tackled, like the one today about Ohio State and the next wave of early-entrants to the NFL Draft? Send it in right here — and check back daily for the answers.

Who can leave from the Buckeyes for the draft next year.. providing 2020 ends?

The headliner for the next Ohio State draft class is already obvious, and Ryan Day was fielding questions about the stock of his starting quarterback before all the names had even been called over the weekend.

Yes, Justin Fields will in all likelihood be turning pro after his second season leading the Buckeyes. And he could have a lot of company from the program joining him and leaving eligibility on the table.

How many early entrants will there be for the Buckeyes? It’s not even much of a stretch to project that number at nine right now, and it’s possible it could even grow beyond that depending on how the first-time starters at cornerback progress when football resumes on campus. Ohio State is absolutely loaded with elite talent right now, and while not everybody can fit in the first round and a handful of veterans have stuck around over the last few years to enhance their resumés and keep winning Big Ten titles, it’s going to be tough to hang on to all of these draft-eligible Buckeyes.

“I think it’s something you can get frustrated with or you can embrace it,” Day said after the NFL Draft ended over the weekend. “I think it’s something our staff has talked about. At Ohio State, it’s finding the right balance of young, talented guys like Dwayne Haskins or Chase Young or Jeff Okudah who are only going to be here for three years mixed in with fourth- and fifth-year seniors who are veteran and have been around the program with great leadership and maturity.

“This year we have Justin Hilliard and Jonathon Cooper, we’re hoping to hear about C.J. Saunders [and his appeal for an additional season of eligibility] — there’s fifth-year seniors in the program who bring a maturity level to the table. When you mix that in with very talented players, sometimes generational talent, I think that’s the right recipe. The maturity and leadership mixed in with the talent is where you can find something special.”

There’s a long way to go right now, and obviously there’s a ton of uncertainty about the next step for football programs in the midst of a pandemic.

But working under the assumption that the season proceeds as scheduled, here’s how Lettermen Row projects the situation for the Buckeyes who will have a choice to make before the 2021 NFL Draft.

The Buckeyes could have already lost three of those standouts since redshirts gave offensive linemen Josh Myers and Wyatt Davis and cornerback Shaun Wade the option to leave after last season. All three of them would have been drafted, but all believed there was room to grow and the potential to lock up first-round status with one more year of development. That decision will be a no-brainer for them after this year, and there won’t be much for Justin Fields to think about as he looks to build on his Heisman Trophy-finalist campaign in Year Two working with Day. It’s a little challenging at this point to get a read on exactly how high wide receiver Chris Olave would be selected, but it seems unlikely that he would have more to prove with the Buckeyes after this season.

The next tier of decisions is sandwiched between the clear-cut, already-established products and those that are pure projections. No, defensive linemen Tyreke Smith and Tommy Togiai haven’t been in the front line for the Rushmen yet, but both of already produced and undoubtedly have the physical tools to shine at the next level. No, tight end Jeremy Ruckert hasn’t revolutionized the position yet for the Buckeyes, but his versatility and athleticism should expand his role this year and make him appealing to NFL teams. And while Josh Proctor could be in the wait-and-see category as a first-time starter, nobody who has ever watched him has many doubts that he’s tabbed for stardom. For these Buckeyes, the choice could really go either way and will need to be debated as the season winds down.

Buckeyes who could explode, surprise

Never bet against Ohio State cornerbacks or defensive linemen when it comes to the NFL Draft. Starting in the secondary is a surefire way to become a professional with the Buckeyes, and Sevyn Banks and Cameron Brown appear to be the next guys in line to continue the rich tradition for the BIA unit. Tyler Friday’s stock with the Rushmen is a bit murkier because of the other talent at defensive end and the possibility that he could eventually become the next three-technique, pass-rushing weapon on the interior. But he doesn’t get enough credit generally for his skills, and it’s not out of the question that he could blossom into somebody worth drafting in the early rounds next year. And while Nicholas Petit-Frere needs to win the right tackle spot outright for the first time this year, he was once the top-rated offensive tackle recruit in the country for a reason — a productive year could have him facing a choice about his future.