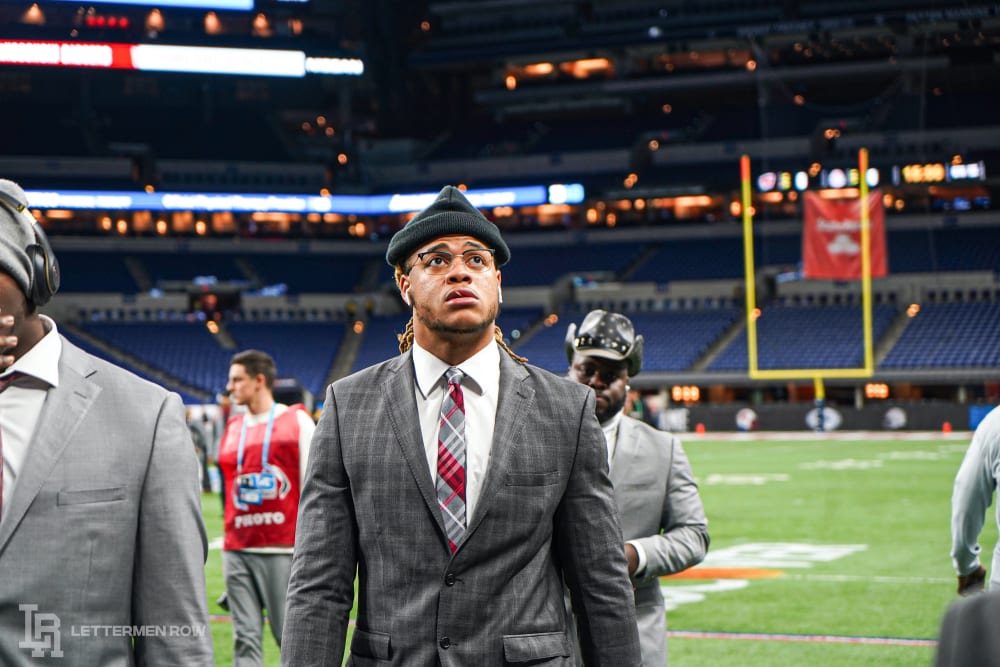 Ohio State star Chase Young will be a hot topic at the NFL Combine. (Birm/Lettermen Row)

COLUMBUS — The business trips to Indianapolis aren’t done for Ohio State products quite yet.

After three consecutive visits there to claim the Big Ten title, a huge handful of key Buckeyes are heading back there yet again to represent the program even with their college careers now over. And while the NFL Combine is obviously more about individuals than where the athletes played over the last few years, there is certainly added cache for the Buckeyes given the track record of success for their guys at the next level.

Plus, it won’t hurt them at all over the next few days of workouts, interviews and measurements that the venue will be plenty comfortable for the Ohio State contingent.

“I think everyone in Buckeye Nation saw a team that played really, really hard [last season],” Ohio State coach Ryan Day said. “It was well coached. We didn’t reach all of our goals, but certainly a good starting point here as we move forward.

“When you look at what we did this year, I’m proud of the way the guys played, how hard they played, how competitive they were and how much they were together.”

A bunch of those Buckeyes will be reunited again this week at the NFL Combine, and Lettermen Row will be on hand to provide full coverage. But before hitting the road, here are Five Questions that will bear monitoring for Ohio State.

Does Chase Young need to do anything?

The film speaks for itself, and Chase Young left no doubt that he was the most dominant defensive player in the nation last season. If he wanted to put a little cherry on top of the resumé, there’s also no question his workout numbers would blow all the evaluators away this week at the NFL Combine. It seems, though, that Young is effectively locked into the No. 2 spot and destined to head home to the Washington Redskins, so there might not be much incentive for him to do any on-field workouts in Indianapolis. As competitive as the Heisman Trophy finalist is, Young will probably be itching to show what he can do. But the reward most likely isn’t going to be worth the risk, which means it could be a relatively light week for him. 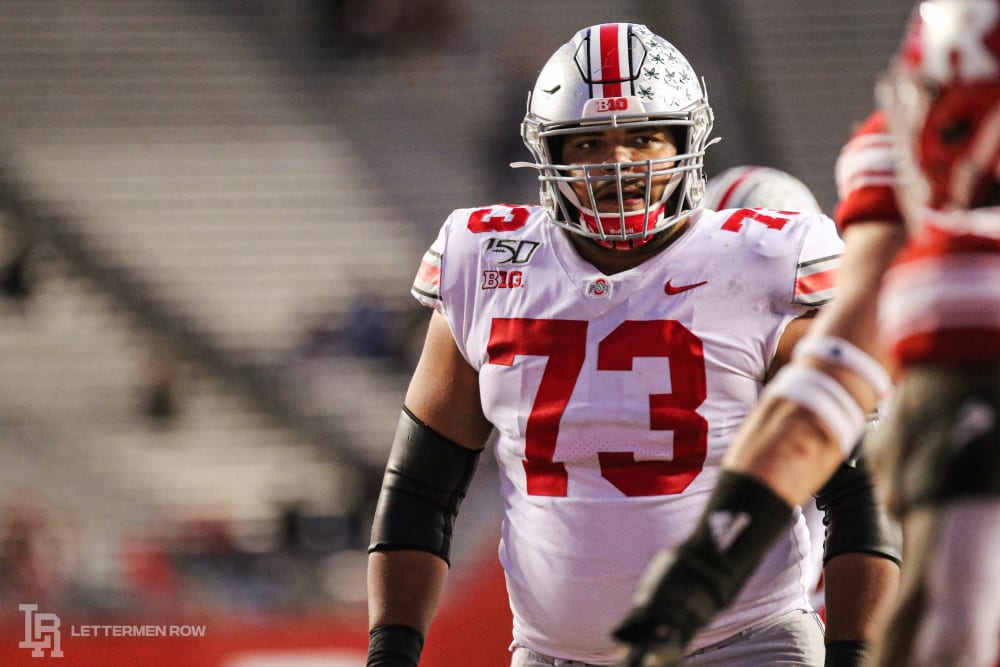 There’s not much physically beyond maybe putting together a solid performance on the bench press that can do much for an interior offensive lineman this week, and Jonah Jackson is surely going to give NFL teams what they want in that regard given his undeniable strength. Assuming he does that, Jackson is also likely to interview well and impress teams with his knowledge, maturity and willingness to take on big challenges — all of which has fueled his rise as one of the biggest movers on the draft board since he arrived at Ohio State last summer. How early could Jackson hear his name called at the draft? It’s well within reach that he could be the first inside lineman to be selected, and he’ll be closely watched by any organization looking for help up front.

There are only so many targets to go around at Ohio State, and it’s now been proven repeatedly that catch totals with the program aren’t a good way to measure the potential of a program that is cranking out NFL-caliber weapons. Just ask Michael Thomas or Terry McLaurin how much modest college numbers mattered in the big picture. Thanks to guys like that thriving at the next level, the Buckeyes have bolstered their case as one of top shops for teams looking for weapons in the passing game, and there will be three new options to watch this week in Indianapolis. K.J. Hill actually comes ready with a resumé that includes a huge pile of receptions, but that’s not the case for Austin Mack or Binjimen Victor. For Mack, he’s going to surely get questions about his injury history. And while Victor has made a habit of making highlight-reel grabs, NFL teams might wonder why he wasn’t able to produce as consistently for the Buckeyes. All three of those guys have the ability to be solid professionals, and this will be a key audition for them. 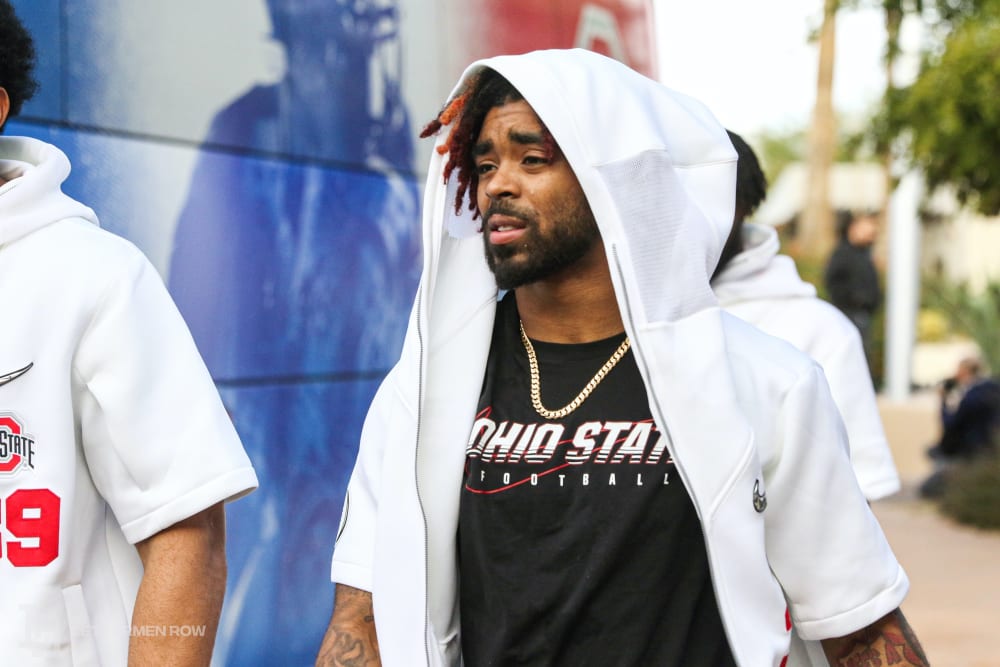 Will Damon Arnette solidify his stock?

There is no uncertainty whatsoever about Jeff Okudah, who has been projected as a first-round pick for more than a year and then backed it up with dominance last season. But he wasn’t working alone in the Ohio State secondary, and Damon Arnette clearly made the right choice to stick around for one more year in an effort to both rewrite his legacy and boost his stock. Despite playing with a wrist injury and a bulky cast all season, Arnette proved he can be an elite cornerback in coverage, a willing tackler and a warrior who will play through pain. The reward is coming for him, and testing well in Indianapolis could vault him into the second round.

There was probably nobody on the Ohio State roster snubbed more often for awards consideration than DaVon Hamilton last season, though the strong, silent defensive tackle never complained. All the veteran did was keep going to work, wrecking offensive lines and developing into an absolute monster on the interior of the Rushmen unit. If voters at the college level weren’t paying attention, surely NFL teams did while scouting him over the course of his final campaign with the program. Hamilton doesn’t pop up in many mock drafts as a possible early pick, but he certainly proved that he can be a game-changing force at Ohio State — and an impressive workout could finally bring more buzz his way.