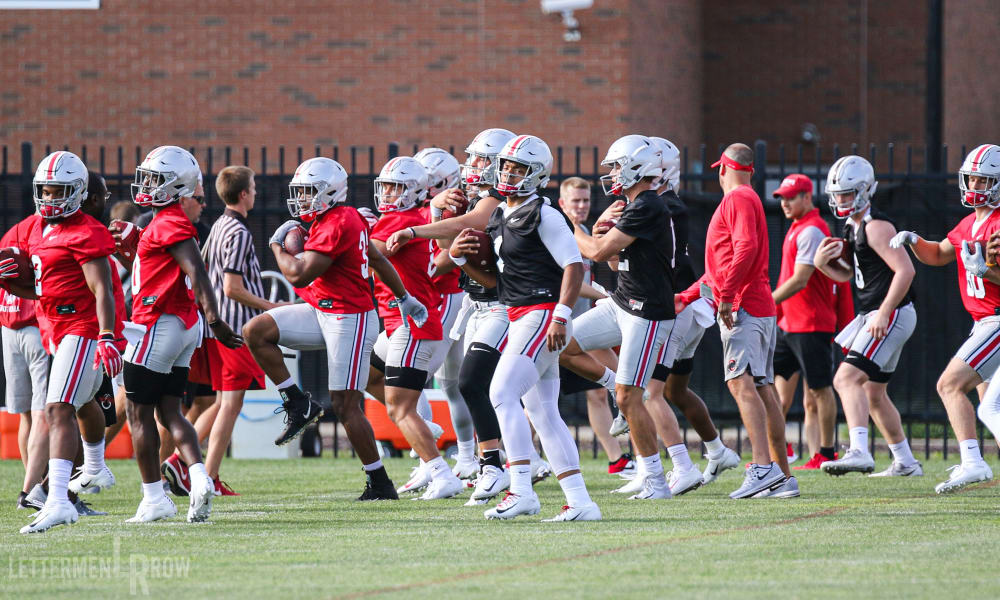 COLUMBUS — If Ryan Day is feeling any nervousness about the start of his first training camp officially, permanently in charge of Ohio State, he’s certainly not showing it.

The Buckeyes reported for their opening practice on a gorgeous Friday morning at the Woody Hayes Athletic Center, embracing championship expectations, ready to compete for jobs and following the example of a coach who isn’t fazed by any of the pressure.

It was only one workout without full pads. But it certainly set the tone for Ohio State ahead of a busy month of preparations.

“Good looking team,” Day said. “It was good to get everybody out there, start football again. It’s all helmets today. We were kind of on and off quick. It’s more about effort. It’s about technique. It’s about those kind of things.

“Not about winning or losing today. There will be time for that when the pads go on.”

That will come soon enough for the Buckeyes, who will have all the pads on and be scrimmaging by the end of next week. But until then, here’s what Lettermen Row learned from the first practice and the interview sessions with some key returning players.

All J.K. Dobbins expects is to be the best running back in America and win a national championship.

Heading into what is widely expected to be his final season with the Buckeyes, the junior didn’t back down at all from his bold predictions for the program made earlier in the year. And he doubled down on the expectations by setting a sky-high standard for himself to help deliver those results for Ohio State as a workhorse tailback.

“Well, there’s a lot at stake,” Dobbins said. “The main goal is to win a national championship, first. And with that, I just feel like I’m the best running back in the nation.

“I want to prove that, and I didn’t last year. I have a chip on my shoulder because I know I can do better.”

JK Dobbins: Ohio State running back on changes to his mind and body heading into junior season
Watch this video on YouTube.

The formula worked almost perfectly a year ago, and Ohio State has a chance to duplicate it again. Can three different veteran wide receivers coax the best out of a new starting quarterback again the way Parris Campbell, Johnnie Dixon and Terry McLaurin did with Dwayne Haskins a year ago?

That’s the plan for Austin Mack.

“We’ve been putting in a lot of work,” Mack said. “You could tell it was a little off in spring, but throughout the summer, we were throwing [a lot] and it really helped us get going. It’s huge for us, especially with a whole new quarterback room that’s never been through this culture. We have, and we have to get them comfortable.

“Being in that pocket, being in that huddle and being able to talk to us, that’s up to the guys who have been here. … It’s all of us just helping the quarterbacks get acclimated as fast as possible.”

Ohio State secondary getting swagger back

The Buckeyes definitely don’t need any more reminders about the defensive struggles of a year ago at this point. It was already on their minds when they hit the practice field to get to work with an eye on a dramatic turnaround to get back to the program’s high standards on that side of the ball.

The secondary, in particular, appears rejuvenated by the opportunity. And with co-defensive coordinator Jeff Hafley bringing a new scheme, new techniques and a new attitude, Ohio State looks to be on the right track even at this early stage in camp.

“I would say the attitude is redemption,” cornerback Jeff Okudah said. “I feel like our backs are against the wall, and I’m really excited to see what our unit does, because I know we have the talent to do it. Now it’s about putting that result on the field.

“Coming out here, everything felt good. I’m excited to see the results.”

If Ohio State is going to have an extended quarterback competition in training camp, it’s going to be up to Gunnar Hoak to keep pace with odds-on favorite Justin Fields.

After arriving in the summer and not having the benefit of going through spring practice, Hoak caught the eye of Ryan Day on Friday and did his part to help bolster the depth at quarterback. There’s a long way to go, of course, but the graduate transfer from Kentucky at least got off to a solid start.

“I was impressed,” Day said. “I thought it’s hard to know until you’re really out there as a quarterback, until you play. It was just in helmets today. In a short period of time, I think he kind of picked up the offense pretty quick. I think he can diagnose and see the field, kind of has a good feel for it. That was a positive.

“I thought he kind of moved the ball around pretty good today, made good decisions. Once he gets more reps under his belt, I think he’ll get more and more comfortable, play with more confidence.”