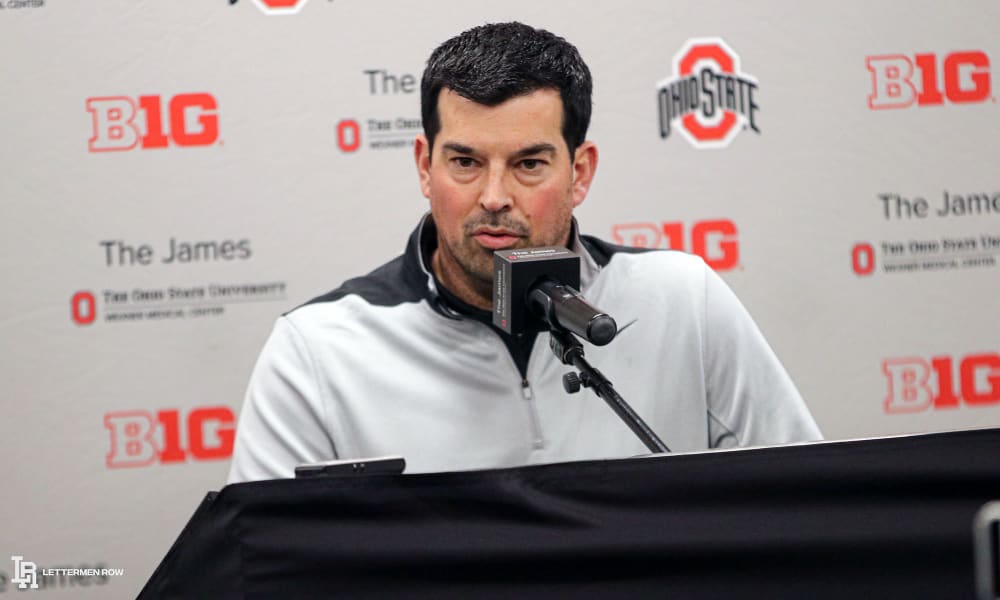 COLUMBUS — This might be the first in-season rematch at Ohio State for Ryan Day, but it’s not a new concept to him.

It’s also not a foreign idea to co-defensive coordinators Jeff Hafley or Greg Mattison or anybody who has ever been around the NFL level, where division opponents play twice every season and return bouts are just a natural order of business.

So, taking on Wisconsin again on Saturday in the Big Ten title game just six weeks after dominating the West Division champs in the Horseshoe might be a unique challenge for the Buckeyes. But they’ve got a coaching staff with previous experience dealing with the process, and that shouldn’t be much of an issue for the nation’s top-ranked team.

All it has to worry about, then, is beating another really good team.

“I think it’s how you handle it, finding that right balance of wrinkles but also the things that our guys can play well so they can play with a clear mind,” Day said. “In games like this, it comes down to players, not plays. But you also don’t want to get out-schemed. Giving them a good, clean plan with enough wrinkles is critical.

“It will be really tough. It is. So much is the situation, when you played them, everything like that. But this is a very, very well-coached team.”

Certainly that applies to the Buckeyes as well, who steamrolled through the regular season with a perfect record — including a 38-7 win over the Badgers in sloppy conditions in late October. Weather also won’t be a determining factor this weekend thanks to the roof at Lucas Oil Stadium, another tweak that will make this second game potentially different than the first.

Both of those topics were discussed during the weekly press conference in the Woody Hayes Athletic Center on Tuesday. And here’s what Lettermen Row learned as the Buckeyes started gearing up for the battle with the Badgers.

Ohio State play-calling could get tweaked on offense

Justin Fields is going to play, there’s no uncertainty about that for the Buckeyes. The sophomore quarterback is still in a little pain with his strained knee, he’s going to have to wear a bulky brace on his left leg and Ohio State might have to account for a bit less mobility from the dual-threat Heisman Trophy candidate.

But there is absolutely no consideration at this point that Fields wouldn’t be in the lineup leading the Buckeyes.

“You do everything you can to be successful,” Day said. “You know that you have to win games. It’s a must. So you do the things that put your guys in the best position to be successful schematically. But then you also understand that there’s risk to it. You try to do the best you can to risk-reward it.

“It’s good to know that he’s so tough and he can handle that stuff. But there’s certainly risk that comes with it.”

With Justin Fields leaving no doubt about his intentions to play on Saturday, the attention then turned to exactly how much pain he’s currently in — and a long discussion about what kind of brace he’ll be in after switching to a bulkier version after aggravating the injury during the win over Michigan.

Fields used both versions during practice a week ago to get a feel for them, learning what he can and can’t do with that extra protection on his left leg. And while his explosive mobility will be diminished in some capacity thanks to a plan already in place to wear the heavy-duty brace, that’s a tradeoff he’ll gladly make to suit up against Wisconsin. And it doesn’t hurt that he has already proved he can deliver a Heisman Moment while wearing it.

“I had the big one on for Tuesday and Wednesday practice [last week], and then I wore the one I started the game with on Thursday,” Fields said. “I was just kind of getting used to those.

Jeff Hafley has a job to do at Ohio State, and that’s his only concern right now. Maybe that won’t stop the rumor mill as the Ohio State co-defensive coordinator continues to be mentioned as a candidate for seemingly every job that pops open in college football, but he’s at least not going to participate in the discussion.

Hafley, named a Broyles Award finalist this week as one of the best assistants in the nation, has repeatedly had his name linked for head-coaching jobs thanks to his work helping turnaround the Silver Bullets. Typically Ohio State tends to get at least two years out of assistants before they move on, but Hafley will certainly have options when the time comes for a decision.

“My thoughts are: I completely understand asking the question, I get it, but I hope you guys can all respect that right now I’m going into the next biggest game of my career,” Hafley said. “That’s really it. If we can just focus on that, I would appreciate it. I get why you asked the question, no disrespect.”

Considering all the firepower at defensive end and the primary responsibilities for DaVon Hamilton being tied to stopping the run and taking on double teams, the redshirt senior certainly would have been a long-shot pick to finish second on the team in sacks at the end of the regular season.

But Hamilton keeps collapsing the pocket from his nose-guard spot, keeps pursuing plays until the whistle — and keeps finding himself on top of the quarterback now with five sacks heading into the Big Ten title game. That wasn’t exactly a goal for the veteran this season, but it’s been a huge bonus for the Buckeyes.

“I’m just blessed to be able to do that,” Hamilton said. “I mean, it just kind of comes to me during the games. I work on it during the week and through practice and whatnot, it’s just kind of working for me in the game.

“I wasn’t really trying to set a goal for [sacks]. I mean, if it happens, it happens. I just want to be as good of a player for my team as possible.”

The goal Jeff Okudah set was for the unit as a whole, not for himself.

Of course, the incredible work the junior cornerback has contributed is a significant reason why the Buckeyes have bounced back from last season’s struggles with one of the best defenses in the country — and it’s also why he’s in the mix as a finalist for the Thorpe Award as the nation’s best defensive back. But his attention is still locked on the Big Ten title game and finishing the national-title push for the Buckeyes, regardless of how much acclaim he receives along the way.

“I think this season has just been great, getting a chance to play with Damon [Arnette] for his last season and Jordan [Fuller],” Okudah said. “In January we set a goal, and that was to bring B.I.A. [Best in America] back, and that’s what we have strived to accomplish this whole season.

“So, getting the accolades or having the No. 1-ranked pass defense or whatever it is, I think it’s just been kind of surreal how the season has played out.”