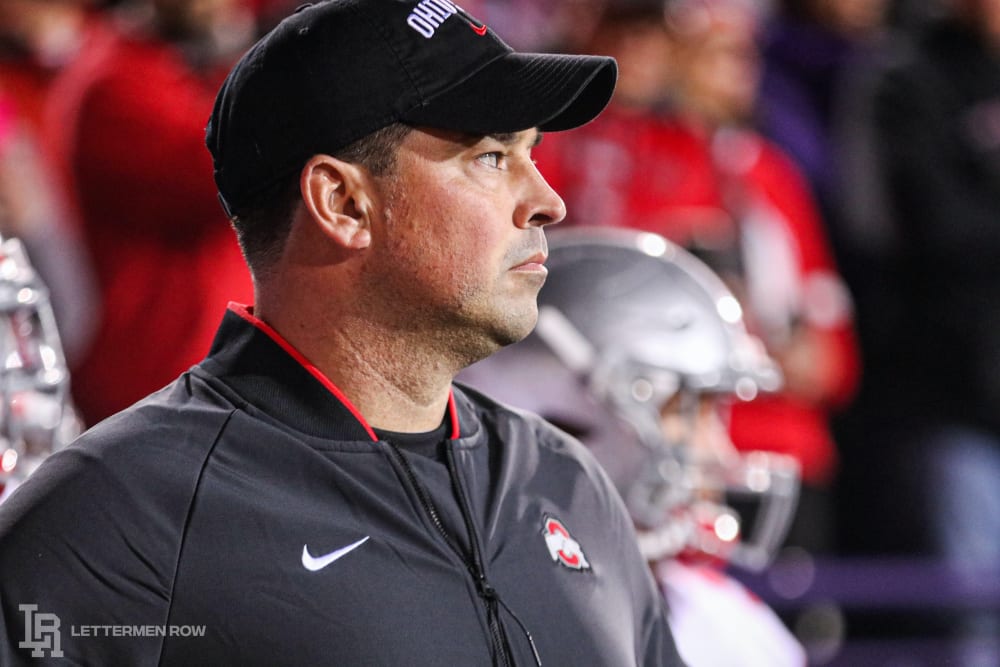 Ohio State coach Ryan Day is looking ahead to Wisconsin, not back on what the Buckeyes have done so far. (Birm/Lettermen Row)

COLUMBUS — Nothing has changed for Ohio State.

Yes, there were a couple admissions from Buckeyes who wished Wisconsin had won last weekend to preserve a matchup of unbeaten programs on Saturday in the Horseshoe. But they know as well as anybody that upsets happen in college football, and that won’t mean anything when the Badgers roll into town looking to make up for it by springing a surprise on them.

So, Ohio State will keep focusing on the fact that Wisconsin boasts one of the nation’s best defenses. The Silver Bullets are already looking to make corrections to their rush defense to gear up for touted tailback Jonathan Taylor. And the Buckeyes are continuing to embrace the mindset that any team is only as good as their next game, which means the Badgers are getting treated exactly the same as they would have been if Illinois hadn’t just knocked them off.

“It’s the same thing with us. We have to bring it this week. It’s going to be our best game of the year, our biggest challenge on both sides of the ball. We have to prepare better than we have all year. We know this is a good team. I mean, they played against teams we played against. You can compare the competition. They’ve done a really good job.”

There was obviously a hiccup last week, but the Buckeyes are evaluating the Badgers at their best — not their worst. And Ohio State is fully aware of what No. 13 Wisconsin is capable of doing when it’s firing on all cylinders as it pops in the game film and starts preparing for what should be a physical battle on Saturday.

As the work week ramps up for the Buckeyes, here’s what Lettermen Row learned about them as they look for their eighth straight win to open the season.

At this point, it would probably be a surprise if Thayer Munford was completely back to full strength in time for kickoff against Wisconsin. But the Ohio State left tackle has proved on numerous occasions that he’s willing to play through the pain to help his team win — including last week at Northwestern when he came off the bench to provide a lift for the offensive line.

Clearly an injured ankle is still bothering Munford. But the Buckeyes were able to lighten his load against the Wildcats by giving Nicholas Petit-Frere snaps in his place, and then Munford had a chance to rest and get treatment again on Monday with every intention of playing against a tenacious Wisconsin defensive front.

“It was gritty, tough — Thayer played for his teammates, which goes to show you what kind of kid he is,” Day said. “Great kid, unselfish. I think the day off was great for him. He’s feeling good. Should be ready to go this week.”

The exact details of the most notable injury on the defensive side of the ball remain unclear, but Ohio State is expecting Baron Browning to return after missing the win over Northwestern. And considering the strength of the Wisconsin rushing attack, having the athletic, hard-hitting junior healthy again at linebacker is a big deal for the Silver Bullets.

Sources have indicated to Lettermen Row that Browning suffered a minor groin injury during the win over Michigan State, and he was close to a game-time decision before the program decided to rule him out and let him recover at home last week. Coming off a strong first half, a rested, rejuvenated Browning could be a game-changer for the Ohio State defense down the stretch.

“Baron Browning is an outstanding athlete,” Ohio State co-defensive coordinator Greg Mattison said. “He’s very, very strong, he’s got experience, he plays extremely hard — he does what a great linebacker is expected to do. He’s a very big part of our defense.”

Maybe it was the attention on his athleticism, maybe it was because there were a few practices in March and April where it looked like Justin Fields was a little shaky at times in a new passing system. But by now, the evidence is piling up that the sophomore quarterback has more than enough accuracy to be a truly dangerous weapon at quarterback — and that’s making it easier on his wide receivers.

In hindsight, all the conversation and uncertainty about the arm of Fields based on an uneven performance in the spring game looks pretty comical now. Obviously those exhibitions don’t mean much in the first place. And to the Buckeyes who were actually working out with him for 14 practices leading up to it, they were already seeing the kind of marksman Fields has proven to be while completing nearly 71 percent of his throws so far this season.

“I think it was the first couple days of spring practice, and it felt like he wasn’t missing a pass,” Ohio State wide receiver Chris Olave said. “He was putting everything on target, and everything looked perfect to us. That’s when we started gaining that respect and counting on him.”

There are two ways to look at the outing by the Ohio State rush defense last week at Northwestern, and at this point it’s no surprise which one the program is using.

Yes, the Buckeyes held Northwestern to 3.3 yards per carry, dominated the line of scrimmage and held an opponent without a touchdown for the third time this season. But the raw numbers on the ground still added up to 157 yards and four different Wildcats had runs that went for at least 10 yards, which Ohio State clearly was bothered by even several days later.

“Yeah, no doubt [there’s room to improve],” Buckeyes captain Tuf Borland said. “There are definitely some things we need to clean up. I mean, our thing is there’s always something to improve on. We’ve got to get better, keep enhancing.”

Forget about the bench press for Tommy Togiai. Maybe it’s time for an update on the 40-yard dash time from the player widely hailed as the strongest on the roster.

There is no question about the defensive tackle’s ability to blow up blocks in the trenches, stuff the run and also help set up teammates behind him to make plays. But Togiai caught the eye on Friday at Northwestern by sprinting from the far hashmark almost all the way to the opposite sideline to track down a tackle, showing off the kind of motor that is a big part of the reason Ohio State is so excited about his potential.

“I mean, it takes more energy, but it’s just another hustle play. That’s what we need on the defensive end.”