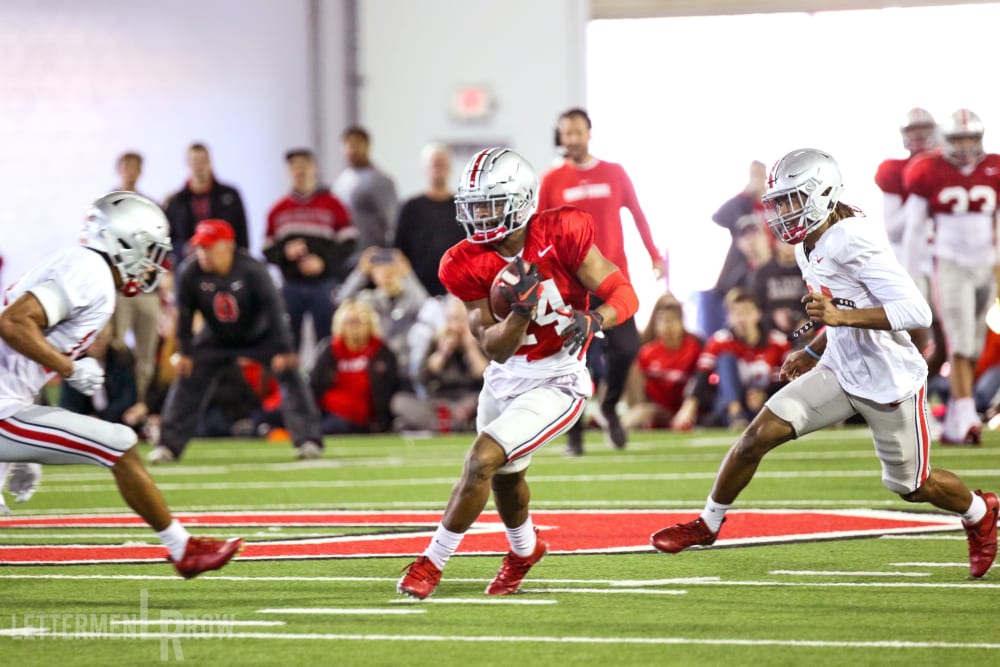 COLUMBUS — Just over the shoulder of Ohio State wide receivers coach Brian Hartline was a clear reminder of the challenge ahead of him this spring.

Hartline had his back turned to the workout where a member of the Houston Texans was checking out Johnnie Dixon and Terry McLaurin, two of the three productive, tone-setting seniors the Buckeyes are trying to replace this season. And if the assistant had turned around, there was a distinct possibility that he might have got a little choked up.

“It’s definitely different,” Hartline said. “That’s why when they left, I cried — literally. One, from a culture standpoint and a relationship standpoint just how we had got to know each other. And I’m sure I’m going to do that again this year.

“But we’re developing right now, and it’s a lot of fun.”

What about easy? Maybe not quite so much given everything those two and Parris Campbell provided for the Buckeyes. But it certainly doesn’t hurt that Ohio State has another group of seniors ready to step to the front of the line and lead the unit, and there could once again be enough depth where Hartline’s biggest challenge is simply managing a rotation overflowing with talent.

How exactly will the Buckeyes handle those reps in Zone 6? How are the defensive backs who battle them every day on the practice developing? After those groups both talked to the media after practice on Wednesday, here’s what Lettermen Row learned about Ohio State when the football is in the air.

The senior cornerback may not have been anywhere close to perfect yet in his career, but Damon Arnette remains in line for a prominent role in the secondary for a reason.

The physical tools are clear to see. The chance to improve his technique is in front of him now that he has a new position coach in Jeff Hafley. And both on the field and off, Arnette has done everything possible to win over the coaching staff and keep his place in the starting lineup even after the rough patches of the last couple seasons.

From the early-season drops to the premature end to the year with a foot injury, Austin Mack obviously didn’t have the kind of breakout campaign that was projected a year ago. But if that setback helps fuel him to even greater heights this season, both Mack and the Buckeyes can probably live with it based on the way he’s already responding in spring ball.

Mack was cleared to start participating again with Ohio State around mid-January after being seen doing some light work at the Rose Bowl. And he’s embracing the chance to get back to work after seeing just how quickly everything can be taken away from him.

“I’m finally back. The first couple days were a little rough getting back to it, but I’m just trying to get back to the feel of everything and it’s fun playing football again.”

Shaun Wade capable of lining up anywhere for Ohio State

Shaun Wade joked that he would line up anywhere Ohio State needed him, even if that meant on the defensive line or left tackle.

Odds are the Buckeyes won’t be testing him as a pass-rusher up front or moving him to offense. But Hafley and the defensive staff are getting creative with him and the rest of the cornerbacks and safeties, giving them opportunities to line up all over the field, training them at multiple positions and working to find the best fit.

“Really all three of those guys are pretty versatile, so you could take any safety in our room and we’re trying to make it so we can plug and play them at all those positions. We don’t just say: You’re this. The more multiple we can be, the more we can do on defense.”

The injury keeping Jordan Fuller from being a full participant this spring is improving, but not on a schedule that would get him on the field where he wants to be during camp. After putting off the NFL Draft for one more campaign with the Buckeyes, the senior doesn’t exactly need the work given all of his previous experience.

There would potentially be some valuable to working him into the new system in March and April, but the real value for the program as a whole might be the extra reps that Fuller’s absence is providing Josh Procter and Isaiah Pryor as Ohio State looks to build depth at a position that struggled a year ago.

“That’s definitely a good thing,” Fuller said. “The more reps you can take the better. Obviously I want to be out here, I miss football and stuff like that. But seeing them progress has been really good to see, and I’m proud of them.”

“For me, I’m feeling really good, really good. Coming along, just day by day — not participating in spring, but I’m on my own progression.”

The competition for catches will again be fierce, and there’s a chance that the impact of C.J. Saunders might not show up with a ton of game-day production.

But make no mistake: Saunders is a key cog in the Zone 6 machine, and he’s doing everything he can to expand his role with the Buckeyes.