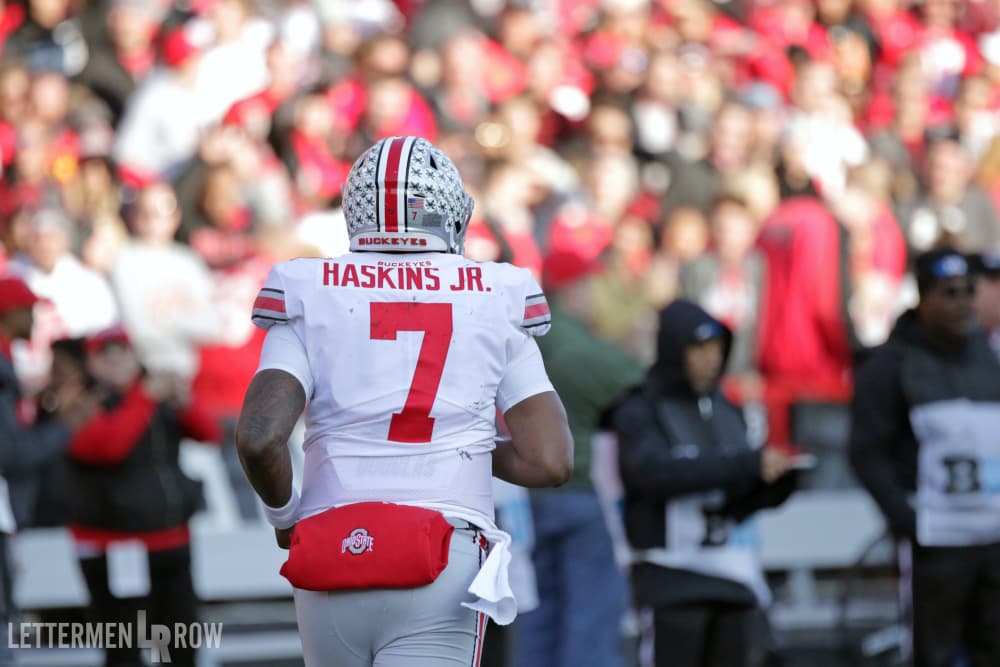 Dwayne Haskins did everything Ohio State could have asked for on Saturday at Maryland. (Birm/Lettermen Row)

Perhaps by this late point in the season, nothing should be a surprise about these roller-coaster Buckeyes. But they still crammed a ton of new, strange plays into a matchup that was definitely not short on entertainment, even if it wasn’t likely to impress anybody on the College Football Playoff selection committee.

In the end, though, Ohio State claimed one more victory as it edged Maryland 52-51 in overtime on Saturday. Road games in the Big Ten are always valuable no matter the score, the Buckeyes remained in position to win the conference — and they ensured the stakes are as high as they could possibly be for The Game next week.

But before diving into Rivalry Week for the Buckeyes, Lettermen Row is taking one more look back at what was learned on the field at Maryland Stadium. Let’s get to it. 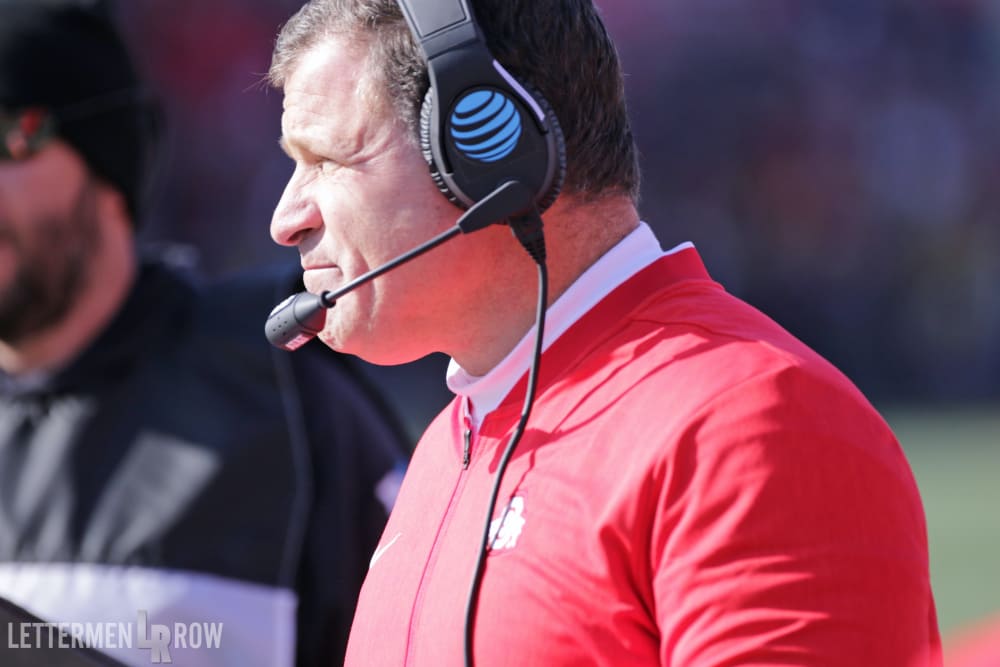 Ohio State is broken on defense

There appeared to be signs of improvement on defense over the last couple weeks, but they clearly weren’t real. Ohio State made enough plays to knock off an overmatched Nebraska team and it benefitted enormously from an absolutely terrible Michigan State offense, but it made an average Maryland squad look like a juggernaut on Saturday afternoon. With as much talent as the Buckeyes have collected on the recruiting trail, it’s clearly time to point the finger at the coaching staff heading into the final week of the regular season with a far more talented opponent on deck. Whether it’s scheme adjustments or simply teaching poor fundamentals, Ohio State is quite obviously not putting the Silver Bullets in position to succeed — and that starts with coordinator Greg Schiano.

Buckeyes can ride J.K. Dobbins down the stretch

Thanks to a bruised quad for Mike Weber, Ohio State finally went into a game planning to use one tailback and let him build up some momentum. And J.K. Dobbins was more than just up for the challenge posed by carrying the football 37 times — he thrived with some of his toughest, most impressive running of the season. The sophomore fought for extra yards, he never showed any real signs of fatigue and he kept grinding all the way to a career-best 203 yards and a touchdown. Weber has appeared to be the better option at times this season for the Buckeyes, but Dobbins delivered his most compelling case yet to be the featured back even when the depth chart is at full strength.

Dwayne Haskins will do whatever it takes to win

There have been questions occasionally about his willingness to run from the quarterback spot, but Dwayne Haskins silenced all of that with arguably his best all-around performance of the season. The redshirt sophomore looked to pick up yards with his feet when the coverage was sound or the pocket collapsed. He pulled the ball out on some zone reads and picked up yards. And Haskins wasn’t afraid to put his body on the line in the red zone, battling for the last inches as he punched in three touchdowns on the ground. Combine that with another 400-yard passing performance and three other scores that way and it adds up to a truly special outing for Haskins. 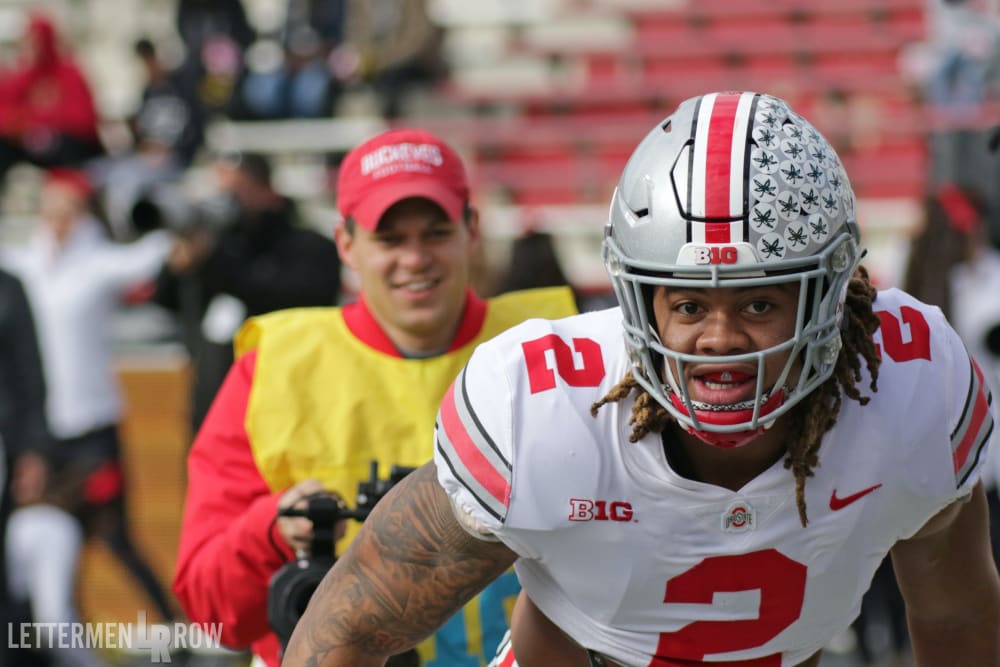 Ohio State defensive end Chase Young is on the upswing again for the Buckeyes. (Birm/Lettermen Row)

Chase Young can be a difference-making force

Maryland wasn’t looking to pass all that often for a variety of reasons, particularly since yards were so easy to come by on the ground. But another significant factor was the way Ohio State was starting to dial up the pass rush, with Chase Young again starting to show up as the future first-round talent he’s billed as at defensive end. The athletic sophomore chipped in two sacks, and after a couple weeks of just getting close without making the big plays, he made life tough for Maryland whenever it wanted to throw. Moving forward to The Game, the Buckeyes need more of that from him, Dre’Mont Jones and Jonathon Cooper.

The gradual increase in production at tight end can be easy to overlook for such a high-powered attack, but that position left no doubt about the trust it has earned at Ohio State with the game in the balance. Facing a fourth-and-inches in overtime, the Buckeyes not only decided to throw for the conversion — they dialed up a play specifically for Rashod Berry. That was the only catch of the game for Berry, but that complemented four from Luke Farrell in a game that really showcased his growing influence as a target. It’s yet another wrinkle for an explosive attack to show off and force an to prepare for moving forward.