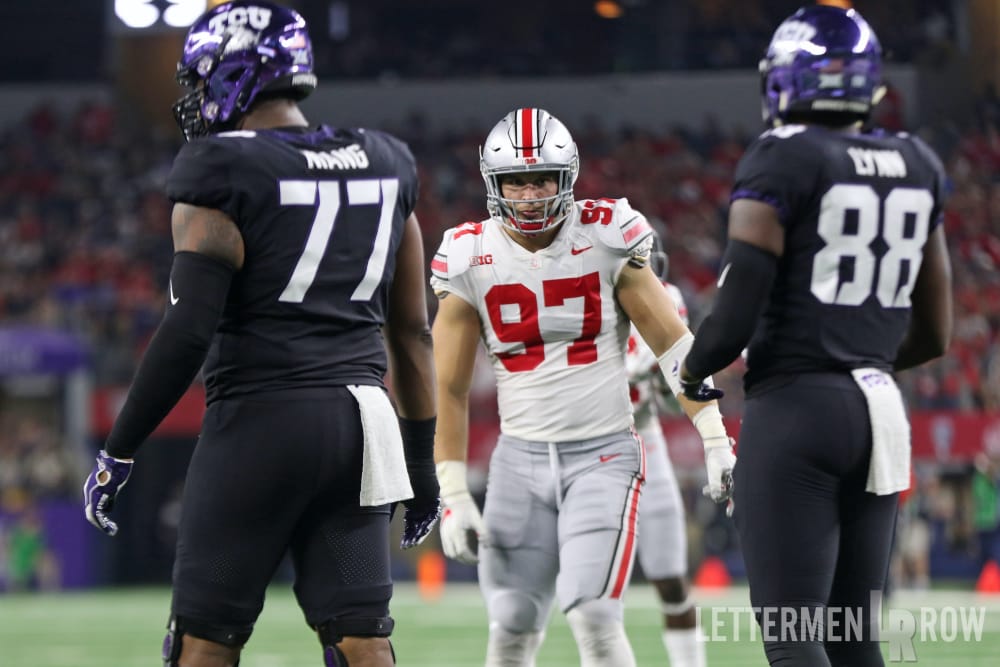 The health of Nick Bosa will be watched closely at Ohio State. (Birm/Lettermen Row)

COLUMBUS — The first major on the field test has been passed by Ohio State.

Now the Buckeyes have earned a bit of a break, especially since the strong start came in the face of such unusual circumstances off the field.

Urban Meyer will be back on the sideline on the Horseshoe on Saturday, and he’s inheriting an undefeated team that has legitimized itself as a national-title contender even while he was absent. It’s a tribute to what Meyer has built at Ohio State that he could be away for all of training camp and a top-15 matchup with TCU and the program would keep on humming without a hitch.

There might be a temptation to start peeking ahead at Penn State and the next major challenge for the Buckeyes. But they don’t just get to fast forward through the season, and the week leading up to the Tulane matchup on Saturday is going to be informative for a whole host of reasons.

Let’s kick off Week Four like usual, with Five Questions for Ohio State. 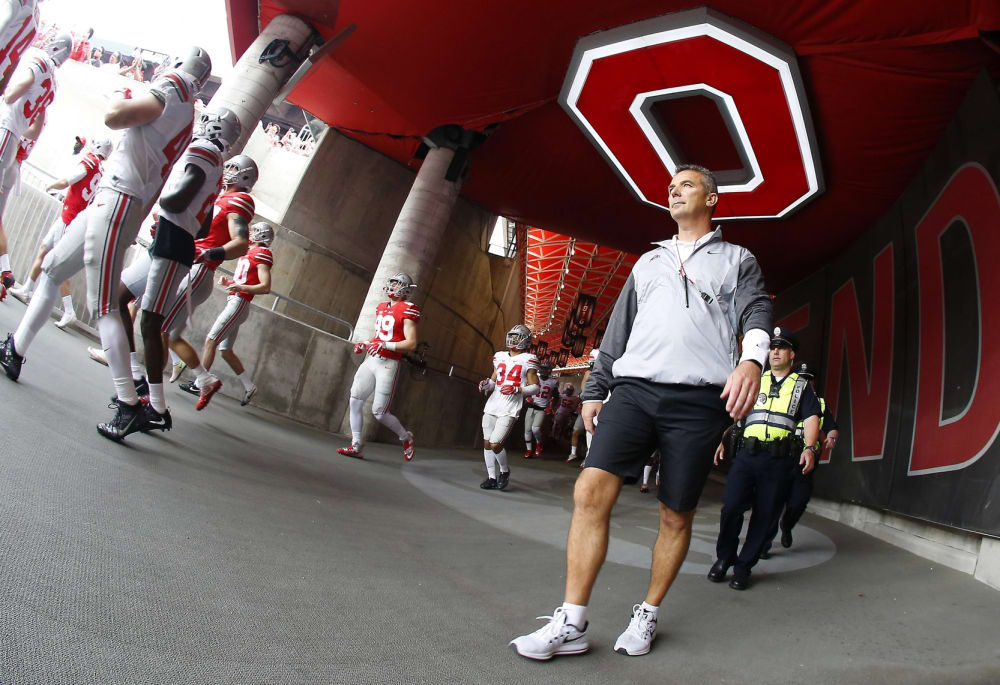 Urban Meyer will make his return to the Horseshoe and the Ohio State sideline this week. (Joseph Maiorana/USA TODAY Sports)

How will Urban Meyer handle his return?

The investigation into Meyer’s handling of unsavory allegations against former wide receivers coach Zach Smith has been covered from seemingly every angle, but there will still be some questions for the seventh-year coach that he hasn’t had a chance to answer publicly yet. He’s expected to resume his normal duties during the Monday press conference at the Woody Hayes Athletic Center, and Meyer will be asked about his text messages, his loyalty to Smith and what he could have done differently over the last three years when he kept the troubled assistant on staff. He got something of a head start on that process by sitting down with ESPN over the weekend, but Meyer will have at least one more day where football isn’t going to be the focus when he’s at the podium.

What is the status of Nick Bosa?

The Buckeyes don’t need the nation’s most dominant defensive player to handle their business against Tulane, so it wouldn’t at all be a surprise to see the junior held out this weekend. Maybe that won’t be necessary and Nick Bosa is totally fine already. There’s also a chance that there might not be a decision to be made and Bosa could miss an extended period of time. Ohio State didn’t reveal much about his health in the immediate aftermath of the win over TCU, and considering Bosa’s importance to making a run at a national title, this will be an issue that will be watched closely moving forward. The Rushmen proved they can still get the job done when Bosa was in the locker room during the second half against the Horned Frogs. But he’s a dark horse Heisman Trophy candidate for a reason, and the Buckeyes will want him healthy for Penn State.

Can Ohio State cut down on defensive busts?

There is reason for a bit of concern with the Silver Bullets now after another game with multiple blown assignments paving the way for explosive plays against the defense. The Buckeyes could chalk that up in the opener to first-game nerves, new faces and the relative lack of pressure against Oregon State. But with TCU busting loose for the longest play Ohio State has allowed in program history, clearly there is something that needs to be done — with the linebackers likely under the most intense pressure now to improve in a hurry. The Buckeyes have acquired more than enough talent in that unit to be one of the most sound defenses in the country, so it might be time to start having some conversations about position coach Billy Davis. 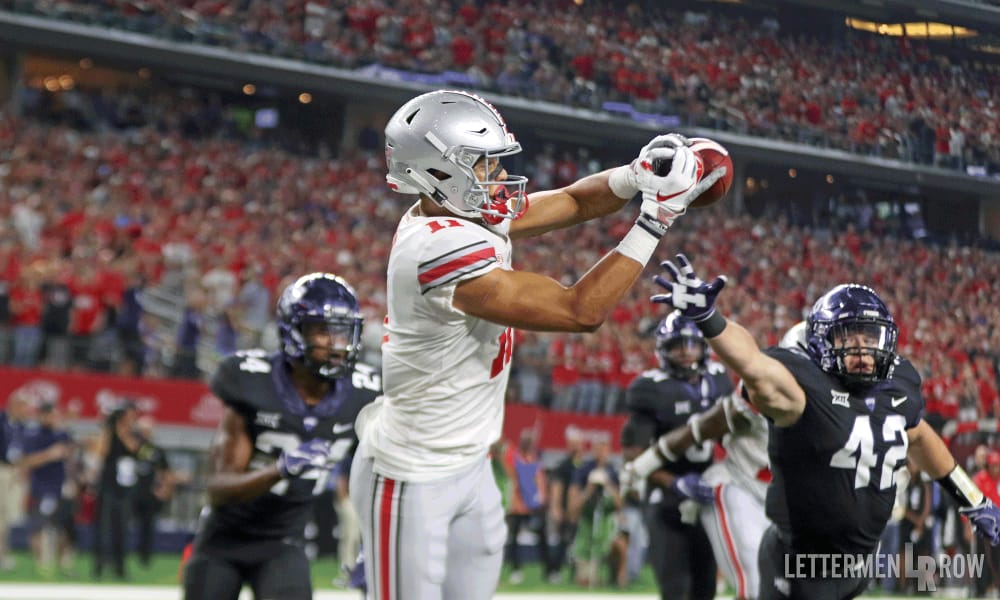 Austin Mack had problems catching the football for Ohio State in the win over TCU. (Birm/Lettermen Row)

How can Ohio State get Austin Mack back on track?

The Buckeyes never lost faith in perhaps their most complete wide receiver, and that might wind up proving beneficial down the road since Austin Mack was able to eventually shake off his problem with drops late in the win over TCU. In the moment, it was hard to understand why Ohio State was willing to keep rolling him through the rotation and throwing him the football when his confidence was clearly shaken. But Mack is mentally tough and obviously physically gifted, with his willingness to fight through the struggles proving the former and his insane catch in the first quarter the latter. Look for quarterback Dwayne Haskins to get his roommate involved early and often against Tulane to make sure Mack puts that up-and-down performance behind him.

Can Ohio State resist looking ahead?

The Buckeyes can talk about treating every week and opponent the same, but actually doing that gets tricky when there’s a clearly overmatched team coming to the Horseshoe and a massive showdown with College Football Playoff implications on deck. Ohio State could give into the distractions and probably still crush Tulane. But it would obviously be better served to come out sharp, focused and motivated to make sure the operation is in working order — then get the starters on the sideline to prepare for the trip to Penn State. This kind of week requires strong leadership from the players, so the captains will need to set the tone for the Buckeyes.