Connect with us
A few trick plays gave Ohio State fits thus far this season, and the Buckeyes should be on their toes when they face Washington coach Chris Petersen. (Jeffrey Becker-USA TODAY Sports)

LOS ANGELES — Urban Meyer was trying to get a bit of rest, but the plays in the Fiesta Bowl on television were generating too much excitement around him to close his eyes.

Chris Petersen was dialing up coaching magic, combining a deep bag of tricks with fearless aggression to have Shelley Meyer wondering why she didn’t see some of those plays when watching her husband work.

“I remember in 2006 before the national championship game, they played the week before in the Fiesta Bowl,” Meyer said on Wednesday after Ohio State’s first Rose Bowl practice. “I was trying to sleep and they were on against Oklahoma and running all those crazy plays, the Statue of Liberty, the flea flicker and the hook-and-ladder.

“I remember Shelley hitting me and asking why I didn’t run those plays. I just said, ‘Leave me alone, I’m trying to sleep.’” 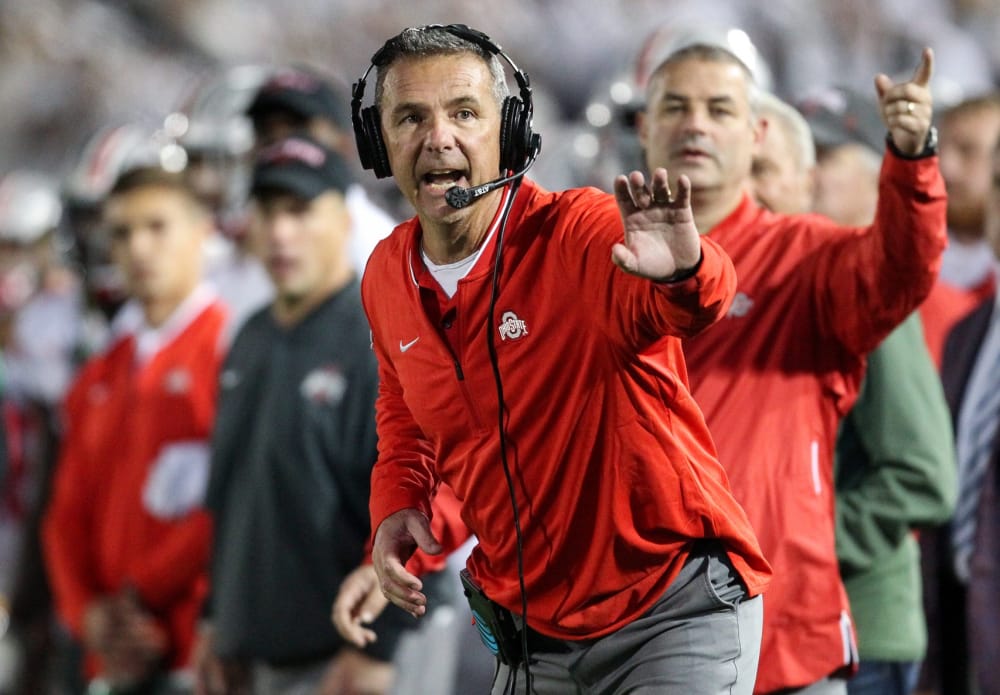 Petersen will be on the opposite sideline with Washington on New Year’s Day for Meyer’s last game at Ohio State, which means it might again be hard for him to grab some shuteye as he tries to have all bases covered to go out with a victory.

In particular, the Buckeyes have been trying to shore up a few issues that have burned them with fakes on special teams as opponents have turned gimmicks into momentum-swinging plays against them recently. Given Meyer’s involvement in that phase of the game in particular, Ohio State has tweaked the practice approach to cut down on its exposure to getting caught by surprise — especially against a coach who won’t hesitate to call something unexpected.

“We run a fake punt now every day against our punt-block team because we were vulnerable,” Meyer said. “It could be because we were pretty aggressive on that, and getting ready for a fake field goal. Other than that, I don’t think they’ll do the dribble kicks or stuff like that, but those are all things you worry about — like the little pass off the kickoff return because we squeeze so many people to the boundary.

“It’s not just because of Chris Petersen, that’s just something we need to work on every time we play.”

Is there a common theme to those breakdowns or is it just a matter of perfect calls and execution? Former Ohio State linebacker Zach Boren was back in the Lettermen Row film lab looking at a few sneaky schemes that have worked against the Buckeyes this season and what can be done to stop them in his latest BuckIQ.