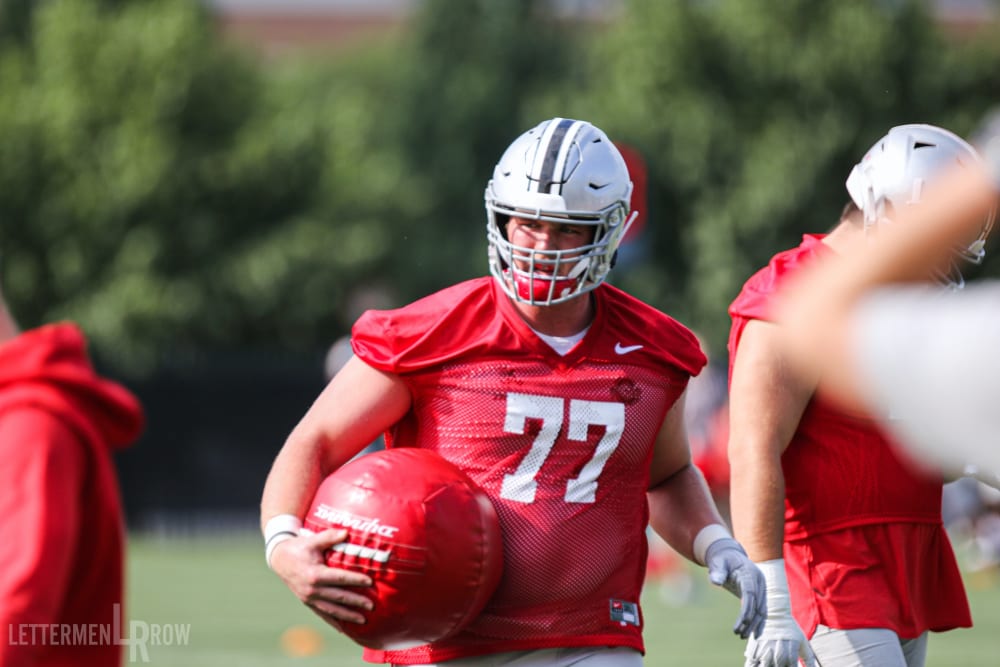 Ohio State freshman Harry Miller has already made an impression for the Buckeyes. (Birm/Lettermen Row)

The speculation, debate and conversations about Ohio State never end, and Lettermen Row is always ready to dive into the discussions. All week long, senior writer Austin Ward will field topics about the Buckeyes submitted by readers and break down anything that’s on the minds of the Best Damn Fans in the Land. Have a question that needs to be tackled, like the one today about the Ohio State and the new talent on hand? Send it in right here — and check back daily for the answers.

Who is standing out in practice?

Ryan Day handled the question like an already-seasoned veteran, gently avoiding the temptation to specifically point to a couple Ohio State players after just a couple practices without pads and offer some potentially premature praise.

“I don’t want to sell anybody short,” Day said. “Because I think there’s a lot of guys working out there and some guys are stepping up.

But while Day was spreading around the credit for the entire roster and not singling out any young Buckeyes, it’s already quite clear which young guys have a chance to truly jump into the mix and make an impact right away. The list can obviously expand since there’s still plenty of work left in training camp, but for Lettermen Row, there were three clear winners emerging from the group of guys who either just arrived or are looking for their first opportunities to shine for Ohio State. 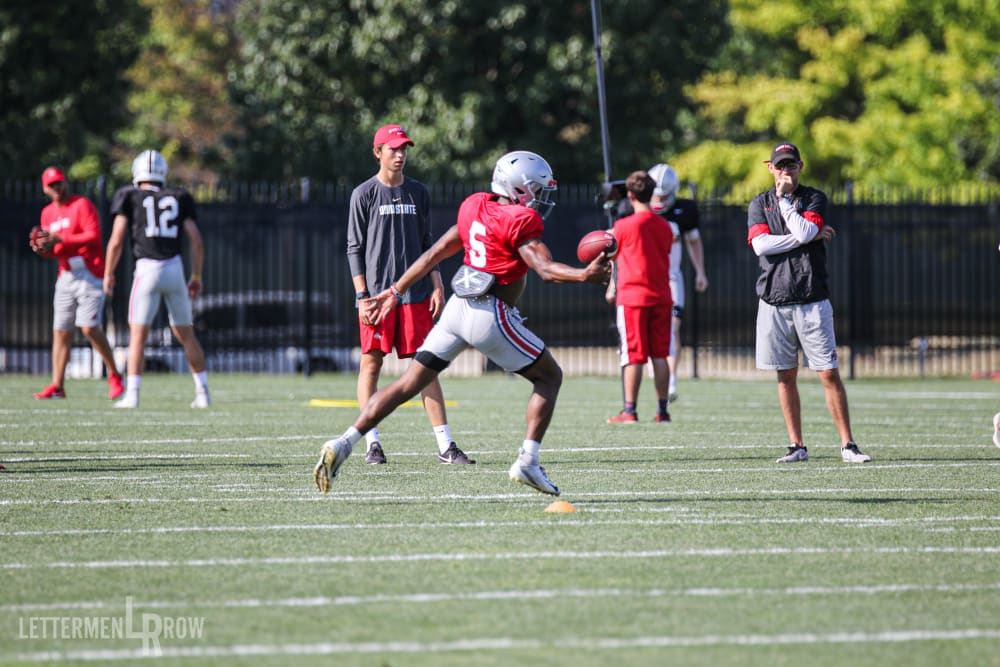 Ohio State has tried to pump the brakes a bit on the hype train that is barreling down the tracks for the five-star receiver, but his performance on the practice field is only going to make that harder. Garrett Wilson is only building more momentum after his stellar first spring camp as an early enrollee, and even teammates are starting to talk publicly about the freshman’s chances of making an instant impact this season.

Mature for his age, physically gifted and with a skilled position coach like Brian Hartline working with him, Wilson is absolutely going to be part of the six-man rotation at wide receiver right away. Where it goes from there for him will depend on if his game reps match what he’s doing when the pressure goes up and he’s not on the practice field. But there are no signs yet of him slowing down.

“Well, the good thing for us is we had him in the spring, so we saw him flash,” Day said. “He does have a lot of ability. Because he has so much talent, he has to learn how to develop discipline and skill. That’s critical for him. We sat down and had those conversations. He’s working on it, but he has a lot of talent.”

Ohio State had a contingency plan at center in case Josh Myers happened to struggle at center, and the original one didn’t call for using a true freshman. But the arrival of Harry Miller has somewhat surprisingly bolstered the overall depth of the offensive line, and it should allow Rutgers graduate transfer Jonah Jackson to stay at center.

In fact, Jackson hasn’t taken any reps at center during training camp as Miller has taken over the second-team role in the middle of the line. And even with his five-star credentials, that’s a pretty remarkable rise for somebody who didn’t participate in spring camp and has only been through a week’s worth of practices at one of the most demanding positions on the field.

“He has the ability,” Day said. “He’s very intelligent. He can process, he can bend, he can do those things. We have a couple guys in there that are candidates to be the backup center, but right now he’s doing a good job. He’s learning quickly, and I think once we get through this week we’ll have a better idea, but so far he’s fit in good. He understands it.”

Josh Proctor wasn’t able to make the instant splash the way it seemed like he might a year ago. Clearly, though, he made the most of his developmental season in reserve, and now the second-year safety is on the verge of a true breakout campaign.

Certainly his two-interception practice during the first week of camp drew more attention to him, but this rise has been coming with Proctor for a while now. His dynamic athleticism was on display throughout spring, he followed that up with a solid summer in the conditioning program and is now channeling that all into standout work on the practice field as he pushes for a regular spot in the rotation.

How exactly Ohio State plans to use the overflowing cupboard of talent in the secondary remains to be seen. But there is no doubt that Proctor will need to be part of the plans moving forward for the Buckeyes.