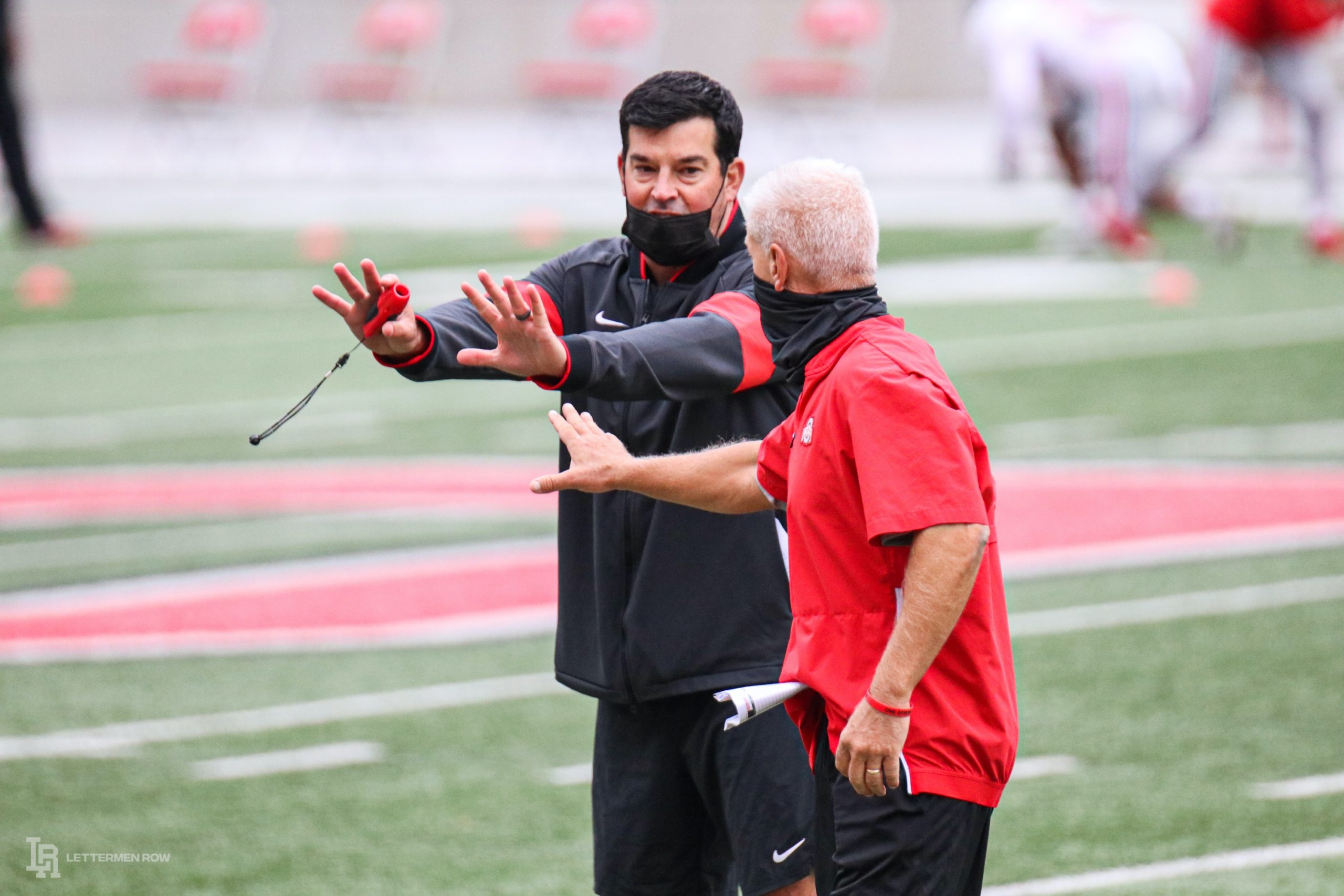 COLUMBUS — The opener Ohio State thought it might never get and the College Football Playoff chase that it nearly lost has almost arrived.

But first the Buckeyes have to get through a couple more days of training camp before the first normal week of game preparations ahead of the season kickoff against Nebraska.

Ryan Day has already been taking his team into the Horseshoe to get ready for the new environment during his most unusual of seasons, and the Buckeyes were in there again on Saturday going through a scrimmage designed to mimic how it will feel on Oct. 24 against the Huskers. But the time for simulations is fast drawing to a close and the real thing is nearly here for the Buckeyes.

“We’re going to go into the stadium and do some work in there and just turn off all the music and get the feeling for what it’s like to play in an empty stadium,” Day said earlier in camp on his radio show. “Kind of make that our new norm.”

Obviously there’s nothing truly normal this year. But getting through a training camp and playing games will help make it feel that way for the Buckeyes, and Lettermen Row is diving into five remaining questions about the program before it can turn the page to Nebraska Week. 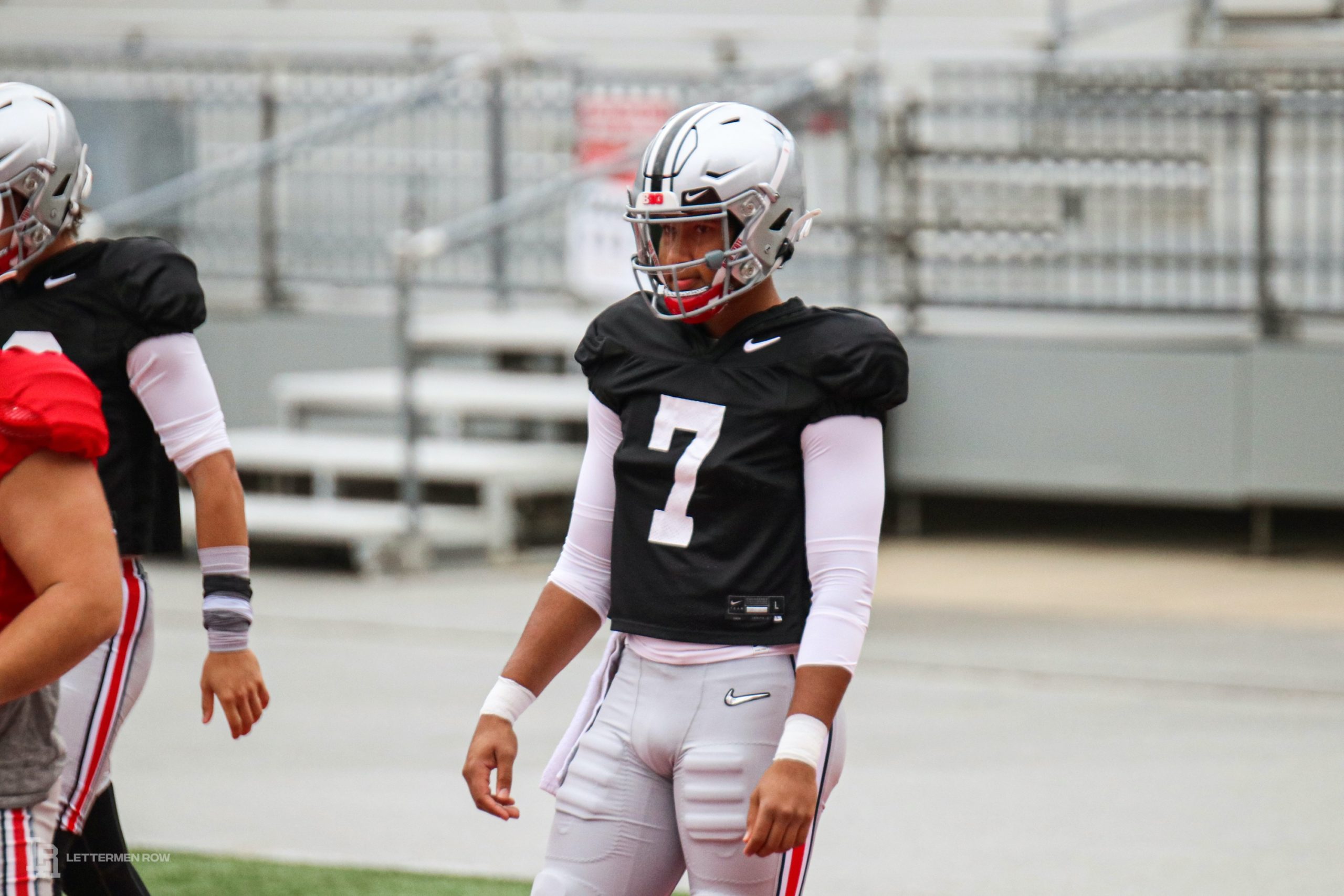 Who will claim backup quarterback job for Ohio State?

The answer probably hasn’t changed for Ohio State since the start of camp, though the way the reps have been handled has been a bit different than might have been projected.

Gunnar Hoak’s experience and familiarity with the Buckeyes system means he would likely still be the first passer off the bench in a pressurized situation. And it’s also why Day was able to focus more time on developing C.J. Stroud and Jack Miller during practices over the last few weeks, working them in with the second-team offense in hopes of getting them up to speed as fast as possible. But it’s well within reason that those talented freshmen could have used those snaps to push Hoak and potentially claim the No. 2 spot behind Justin Fields, and it will be fascinating to see how Day handles that situation early in the season.

Do Buckeyes have enough depth at defensive tackle?

Larry Johnson is confident that he’ll have another six-man rotation on the interior of the defensive line, and the vaunted position coach has undoubtedly earned the benefit of the doubt. If Johnson isn’t worried, there’s probably no reason for anybody to question the Buckeyes.

It’s still unclear, though, if Haskell Garrett and Taron Vincent will be fully cleared in time for the opener against Nebraska. And those two projected regulars aren’t in the lineup, that will certainly provide a test of the depth of that unit as the Buckeyes try to replace three seniors on the inside. There have been positive reviews for the work Antwuan Jackson and Jerron Cage have provided on the practice field, and Ty Hamilton has the potential to emerge as an early contributor if the Buckeyes need to dip into the freshman class at all. But all eyes will be on Garrett and Vincent heading into the first availability report next week. 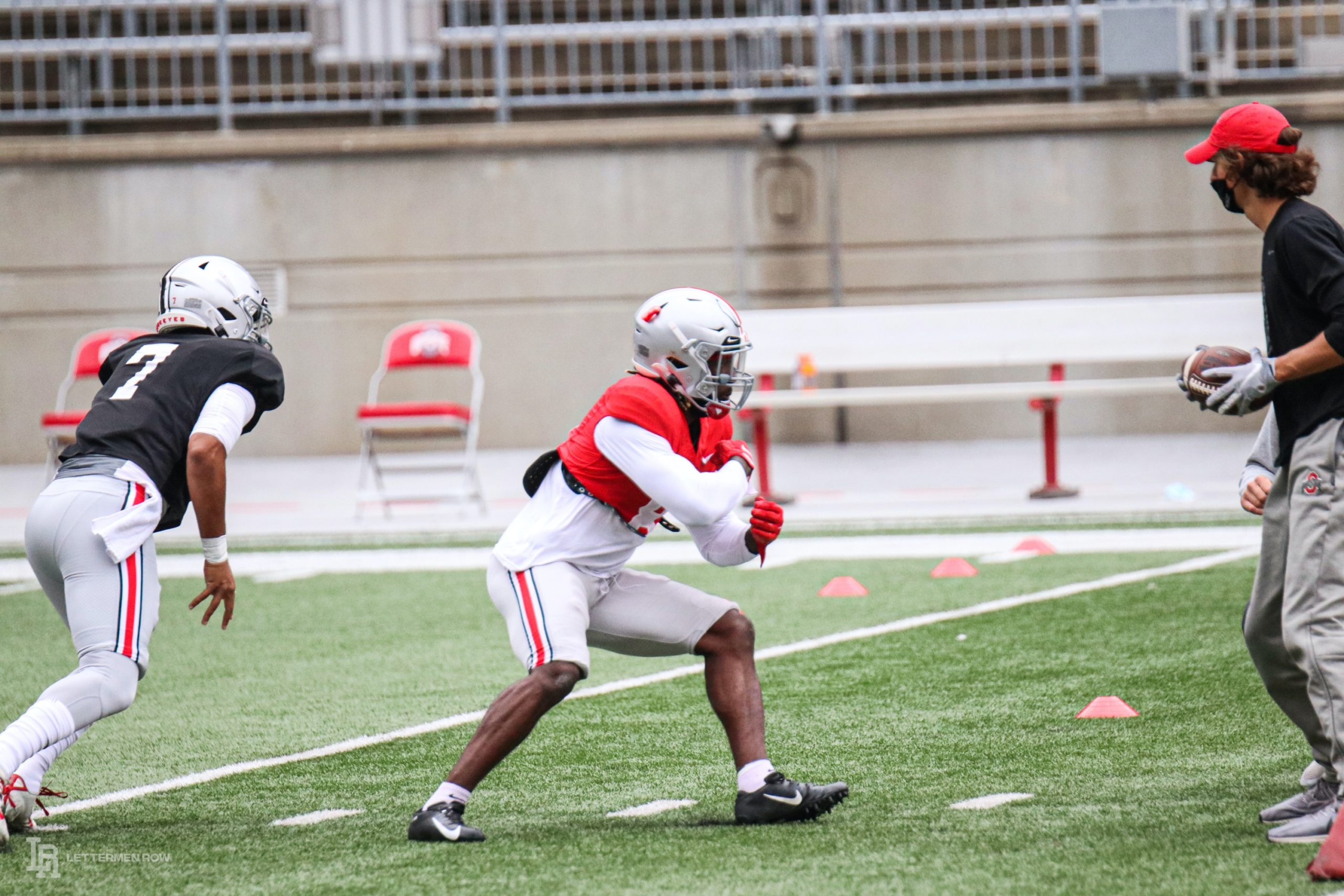 Ohio State running back Trey Sermon can be a star for the Buckeyes. (Birm/Lettermen Row)

Tony Alford has gone with bell-cow backs and he’s deployed a rotation in the backfield, and he’s not married to just one approach with his position group. He’s also never in a hurry to tip his hand about how he’ll use rushers like Trey Sermon and Master Teague before the season starts.

So, what’s the best approach for this season? Trey Sermon seems like a tailor-made fit for the Ohio State offense, and he’s a proven contributor for a national-title-caliber program. Master Teague took a step forward last year before his spring Achilles injury, and he’s already shown he can be effective against Big Ten defenses. Both bring plenty to the table, and it’s a safe bet that Alford will have roles for both of them. The lingering question is how much work each will get when the stakes are highest, and that probably needs to be resolved sooner than later with Penn State looming in Week Two.

Even some of the most talented defenses in the country have had to work through some kinks early in the season, as Alabama can certainly attest after struggling mightily on Saturday against Ole Miss. The extended layoff and the absence of spring drills has presented a challenge for teams trying to drill tackling, and Day has publicly offered reminders that there is simply no substitute for playing live football.

The Buckeyes have drilled fundamentals in creative ways, they’ve emphasized the importance of tackling to an extreme degree and they will have watched other programs at their level deal with a little rust while they’ve been going through training camp. Considering how many veterans are returning at linebacker, Ohio State figures to be in relatively good shape to avoid many of those problems. But the Buckeyes only have a few more chances to get through those workouts and make sure they’re in good defensive shape.

Does Ohio State have starting offensive line locked in?

There hasn’t really been any uncertainty at left guard as Harry Miller seemed to have that spot locked up way back in March, and nothing has really changed with Nicholas Petit-Frere appearing to maintain his edge at right tackle despite the push from some younger guys.

But Day maintained that all positions were open for competition throughout camp, and Paris Johnson and Dawand Jones were both fighting hard to earn a spot in the lineup. Johnson is as physically developed as freshmen can possibly be, and he’s going to get snaps one way or another this season. And Jones has only become more intriguing for the Buckeyes as they’ve toyed with using him at guard to bolster the depth and versatility of the unit. There aren’t likely to be any surprises with the first unit, but nothing is ever set in stone with the Buckeyes.