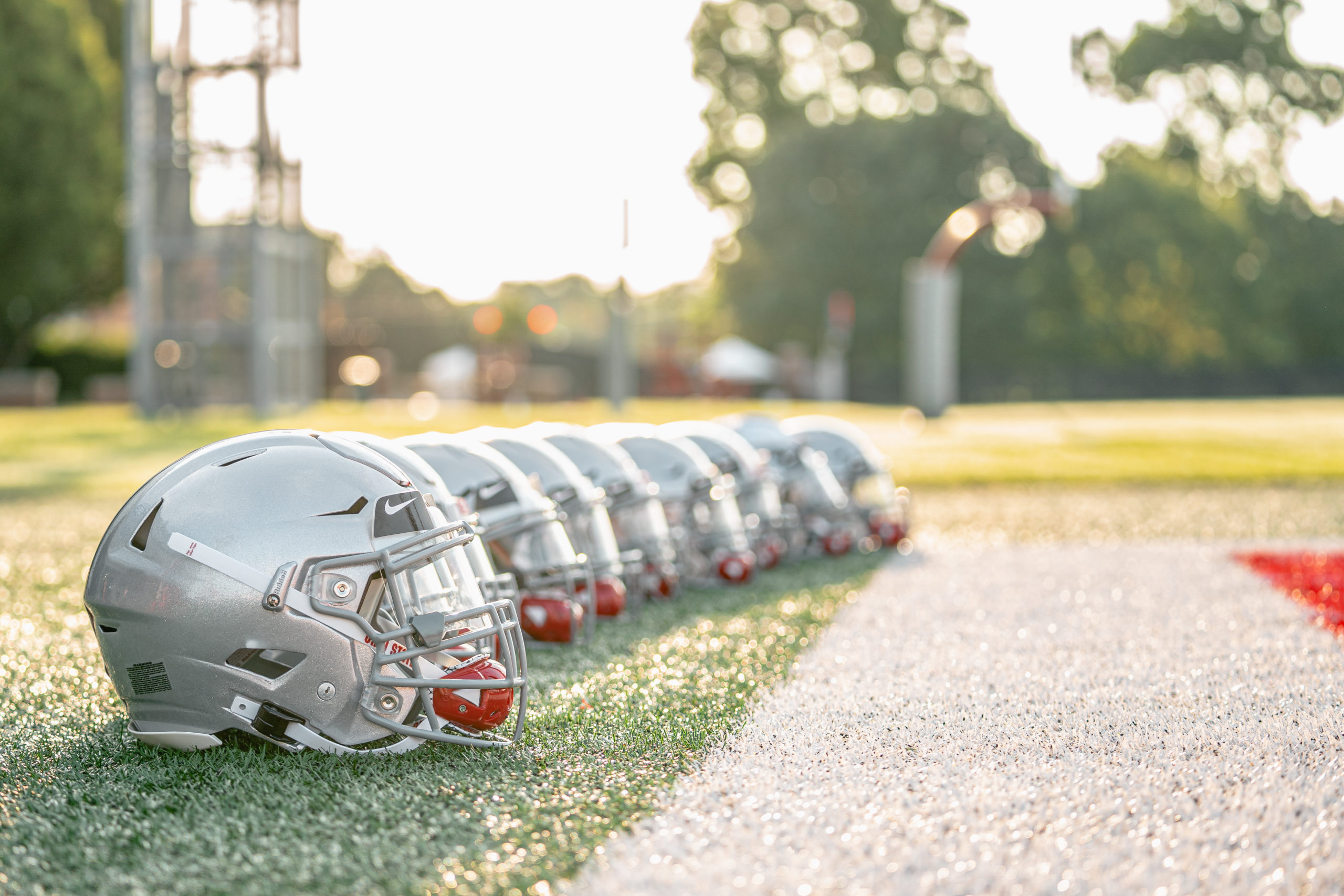 COLUMBUS — No matter what kind of season schedule it shapes up to be for Ohio State, this promises to be a preseason camp like none before for the second-ranked Buckeyes.

Masks worn as much as possible except when real football is being practiced, dressing in the open spaces of the Woody Hayes Athletic Center indoor field, meetings conducted with social distancing the mandatory seating arrangement, meals conducted in the same manner, and no team hotel/dorm sequestering for the first time since anyone can remember. This is preseason camp 2020, brought to you by Covid-19 restrictions and safeguards.

And Saturday, along came another hurry up-and-wait directive from the Big Ten after a meeting of its presidents:

“Based on the advice and counsel of the Big Ten Task Force for Emerging Infectious Diseases and the Big Ten Sports Medicine Committee, until further notice, all institutions will remain in the first two days of the acclimatization period in football (i.e., helmets shall be the only piece of protective equipment student-athletes may wear) as we continue to transition prudently through preseason practice. All other fall sports will continue to work locally with team physicians and athletic trainers to adjust practices to the appropriate level of activity, as necessary, based on current medical protocols.”

Ohio State second-year coach Ryan Day indicated heading into camp on Thursday that the ability to pivot quickly would be paramount. The key is to keep learning about what works and what should be shunned as camp continues. It’s what the Buckeyes have been doing for two months already.

“Along the way there’s been things we’ve learned, and we’ve adapted,” Day said, and that’s going to continue because “that’s real. Right now, as we talk to our players, talk to our parents, they feel safe, they feel strong about what we’re doing.

“But everything changes on a daily basis. We’re going to continue to adapt and continue to communicate.”

Even without Saturday’s new restrictions, this was going to be a different kind of August for the Buckeyes, three of its captains agreed earlier in the week. 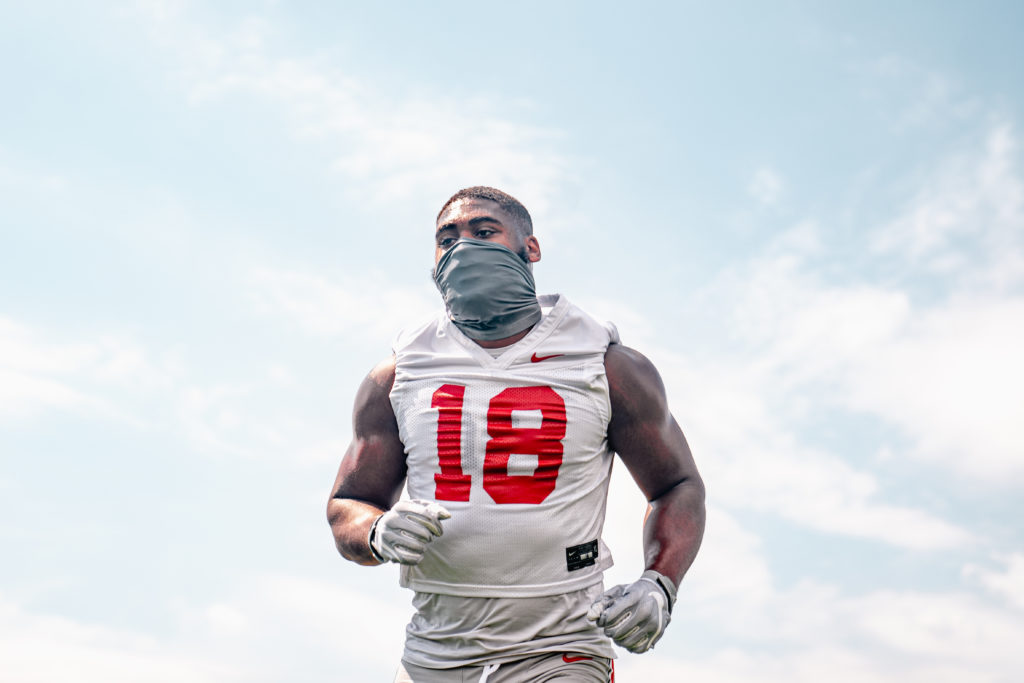 “Moving forward into camp, just the flow of practice may be a little different because you have to take multiple reps at a time, then wait while they sanitize,” three-time captain and linebacker Tuf Borland said. “Just small things like that will be the biggest difference.”

Linebacker Justin Hilliard knows preseason camps like few others. This will be the sixth at Ohio State the newly elected captain has either taken part in or observed, his career pockmarked by recovery from various injuries, so much so that he was granted a sixth season of eligibility.

“Things are different every year but obviously this year is a lot different,” Hilliard said. “I think so far we’ve been really good at being able to adapt to what we’ve been allowed to do. For example, for two weeks [in July] we had to quarantine because we had some guys get coronavirus way back then, but we were able to ramp that back up and keep the process going to where that wasn’t a problem any more.

“I think the name of the game this year is going to be being able to adapt to whatever procedures and rules comes as we go. But I think as of now we have a great system. Our coaches and our coaching staff do a great job of creating as safe an environment as they can for us.”

But until now, they Buckeyes haven’t been playing real football this summer. Camp is all about getting back into the swing of the rudiments: Blocking and tackling, the parts the sport which separate it from almost all others except rugby. It’s close-quarter, face-to-face confrontations which can’t be avoided if the game is to stay roughly the same.

Interestingly, though, the part that concerns football people the most in this Covid 19 world headed into the heart of preseason isn’t the tackling, insiders say. It’s the offensive line going against the defensive line, sometimes play after play, their proximity sometimes a few feet apart, and that’s before the snap, with heavy breathing by all.

“I think the testing protocol is the No.1 thing, in terms of making sure you have a clean practice,” Ohio State coach Ryan Day said. “And then, we want to try to limit the amount of contact we can have.”

As Day mentioned, the key is to keep learning about what works and what should be shunned as camp continues. It’s what the Buckeyes have been doing for two months already.

“Along the way there’s been things we’ve learned, and we’ve adapted,” Day said, and that’s going to continue because “that’s real. Right now, as we talk to our players, talk to our parents, they feel safe, they feel strong about what we’re doing.

“But everything changes on a daily basis. We’re going to continue to adapt and continue to communicate.”

Despite the restrictions that promise to make this camp unusual, at least the players are sort of back together again, defensive end and captain Jonathon Cooper said, instead of just working out nine at a time like it was in June and July.

“Emotionally, [I] feel like us being away from each other was hard for a long time, but even with everything we’re doing at Ohio State, wearing masks, staying six feet apart, it’s great to see the guys,” Cooper said. “Just being around the team, feeling the energy, being able to work out and practice together, I think that’s going to be a huge thing for everybody’s mental health…

They should also know that folks are looking over their shoulder like never before. The Big Ten will continue to do that, the league promised in the Saturday statement.

“Each new phase of activity provides new intelligence and experience and allows us to evaluate the implementation of our Conference and institutional medical protocols in real-time,” the statement read. “In order to make the right health and safety decisions for our student-athletes, we believe it is best to continue in the appropriate phase of activity referenced above while we digest and share information from each campus to ensure we are moving forward cautiously.

“We understand there are many questions regarding how this impacts schedules, as well as the feasibility of proceeding forward with the season at all. As we have consistently stated, we will continue to evaluate daily, while relying on our medical experts, to make the best decisions possible for the health, safety and wellness of our student-athletes.”

In other words, the Sept. 3 league opener, Ohio State at Illinois on a Thursday, is still scheduled. But it appears to be very much in pencil, not ink.